Today Michael Oliver, the man who is well known for his deadly accurate forecasts on stocks, bonds, and major markets, told King World News that the price of gold will reverse higher with extreme speed and violence. Oliver also said the gold bears are doomed and gave an update on the situation in the silver market.

First, Silver Wants To Bolt Higher
It’s clear that over the past few weeks, especially recent days, silver has been pulling on its leash wanting to bolt higher. You can even sense it in the hourly price action.

But as we’ve said, gold is the mama, and until it ends its laborious corrective/ congestive process, underway now for six and a half months, silver will probably not be able to rush toward its dual historic highs at the $50 area.

Second, The Gold Bears Are Doomed
Second observation. In our view, the gold bears are doomed no matter which route gold takes. Whether it violently flushes out the November low (just above $1760) or whether it simply refuses to play that “Stop them out!” game and turns from above the November low. Currently in yet another effort to take out that low, so far undecided. Notice that the past seven weeks have been more or less glued to channel top and continuing to hold in the upper half of the channel’s action (see chart below). 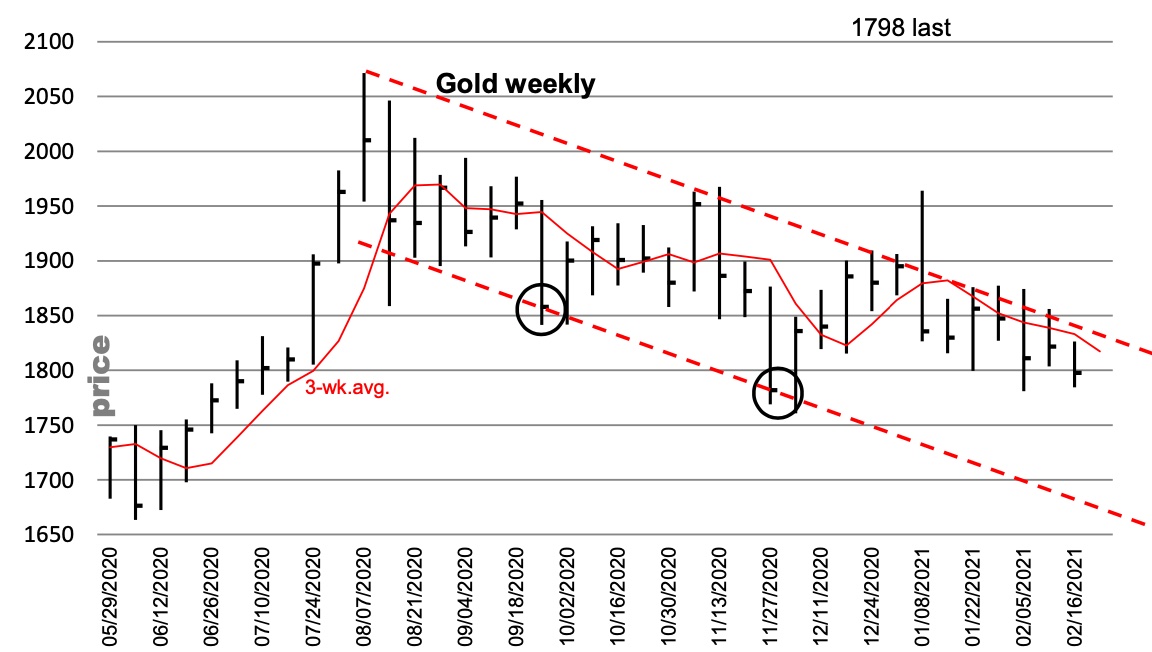 But whatever the outcome of this correction process, it’s probably going to be savage and rapid in its reversal.

Either the bears get renewed downside below November, and very soon, and then gold pole-vaults back to the upside from some deeper low … or gold teases them with a selloff such as today, which soon flips without taking out the November low, and then quickly moves to our weekly channel breakout number (for this week that was specified as a $1856.30 weekly close, which as can see would be amply above channel top)…

Gold Will Spike Violently Higher After Bottoming
But expect violence and extreme speed in any final turn from a low in gold—whether a lower low than November or a refusal to produce such a low. We don’t think the mobs will get time to figure it out and position comfortably for the turn. … To subscribe to Michael Oliver’s remarkable MSA annual research, which is 35-50 reports each month on gold, silver, mining stocks, currencies, commodities and debt, at the KWN special discounted rate click here.

Eric King: “What is happening with your company is astonishing. You are on track to triple gold production with your planned multi-stage expansion, and the entire expansion is being funded with cash flows from operations. That is remarkable.”

A Dream Setup
John Lewins:  “When you look at the next 3 years we’ve got a capital spend of about $240 million, all coming out our cash flow. This year our capital expenditure will be north of $60 million with an exploration budget of about $15 million. But even with those expenditures we are looking at free cash flow in excess of $20 million. We have an extremely strong balance sheet and it will be even stronger by the end of the year. Meaning, we will not be doing any financings because we fund everything through existing operations and cash flow.

An Increasing Pile Of Cash While Tripling Production
And we are still going to be increasing that pile of cash while we are spending that capital expenditure budget which will expand our production to almost triple what we are currently producing. This year we have our guidance at 135,000 ounces of production, but we are targeting 350,000+ of production for stage 3. And as we increase our production that will drive our cost of production even lower, even though we are already one of the lowest cost producers in the world. So we are in for some very exciting times in the coming years.

Exciting Drilling Results And A Growing Resource
We’ve got drilling results coming out later this week covering 30 holes, but we also have an updated resource coming out in Q3 for Kora. There will also be a brand new resource for Judd which will barely scratch the surface of its potential. And we have 10 drill rigs turning right now and another diamond drill rig coming in for underground as well as another one coming in for additional surface drilling. So our growth in terms of the overall resource in the middle of COVID is actually quite stunning, and we strongly believe that our share price is undervalued.” K92 Mining, symbol KNT in Canada and KNTNF in the US.