With continued uncertainty around the globe, today the man who has become legendary for his predictions on QE, historic moves in currencies, spoke with King World News about $10,000 gold and beyond, Dow 23,000 being an anomaly and what he went through on the Black Monday Crash in 1987.

1969 seems like an arbitrary start year but it happens to be the year that I started my first job. No one could have predicted any of those returns. The previous 48 years from 1921 to 1969, the Dow only went up 9X but with higher dividends in that period the total return would still have been 10% annually. Gold on the other hand only had one move up during that period from $31 to $45 in 1933 when the dollar was devalued. That is a meager 1.5X increase. Due to the gold standard, those 48 years had relatively sound money and therefore limited credit creation with the exception of WWII…

The Best Investment For The Next 48 Years
Egon von Greyerz continues:  “Although history can be an excellent teacher, it tells us nothing about the future. Very few would have predicted a 23,000 Dow 48 years ago. So what will happen in the next 48 years? I certainly will not have to worry about that but my children might and my grandchildren certainly will. If I today gave my grandchildren a gift, would it be stocks or gold?

During the last 48 years there were four horrendous drawdowns in the Dow of between 39% and 54%. See chart below.

I’ll Never Forget Black Monday 1987 Crash
Anyone who was invested in the Nasdaq will most certainly remember the 80% drawdown with many stocks going to zero. Looking at the 1987 crash, for example, I remember that day vividly. I was in Tokyo to list the UK company, Dixons (where I was Vice-Chairman) on the Tokyo Stock Exchange. Not the best day for a Japanese listing. It was Monday, October 19, 1987 and became known as Black Monday. I will never forget that day. Looking back on the chart, the 1987 collapse looks like a little blip. That is certainly not how it felt at the time. Hindsight is a wonderful thing!

Dow 23,000 Is An Anomaly
Thus based on history, the Dow should be 9X higher today than in 1969 or 6,300! So how is it possible that we are now seeing a Dow at over 23,000? Well, we have had the Wizards of Fake Money in the meantime who, with their hocus pocus, have created miracles and created money out of thin air.

Little did I know in 1969 that two years later Nixon would change the destiny of the world for decades to come as the US came off the gold standard. By throwing off the shackles of a gold-backed currency, there was no longer anything stopping the US government and the financial system from creating unlimited credit and printing infinite money.

The consequences have been a US and global credit expansion of gigantic proportions. Just in the US, credit has grown 47X from $1.5 trillion to $70 trillion. 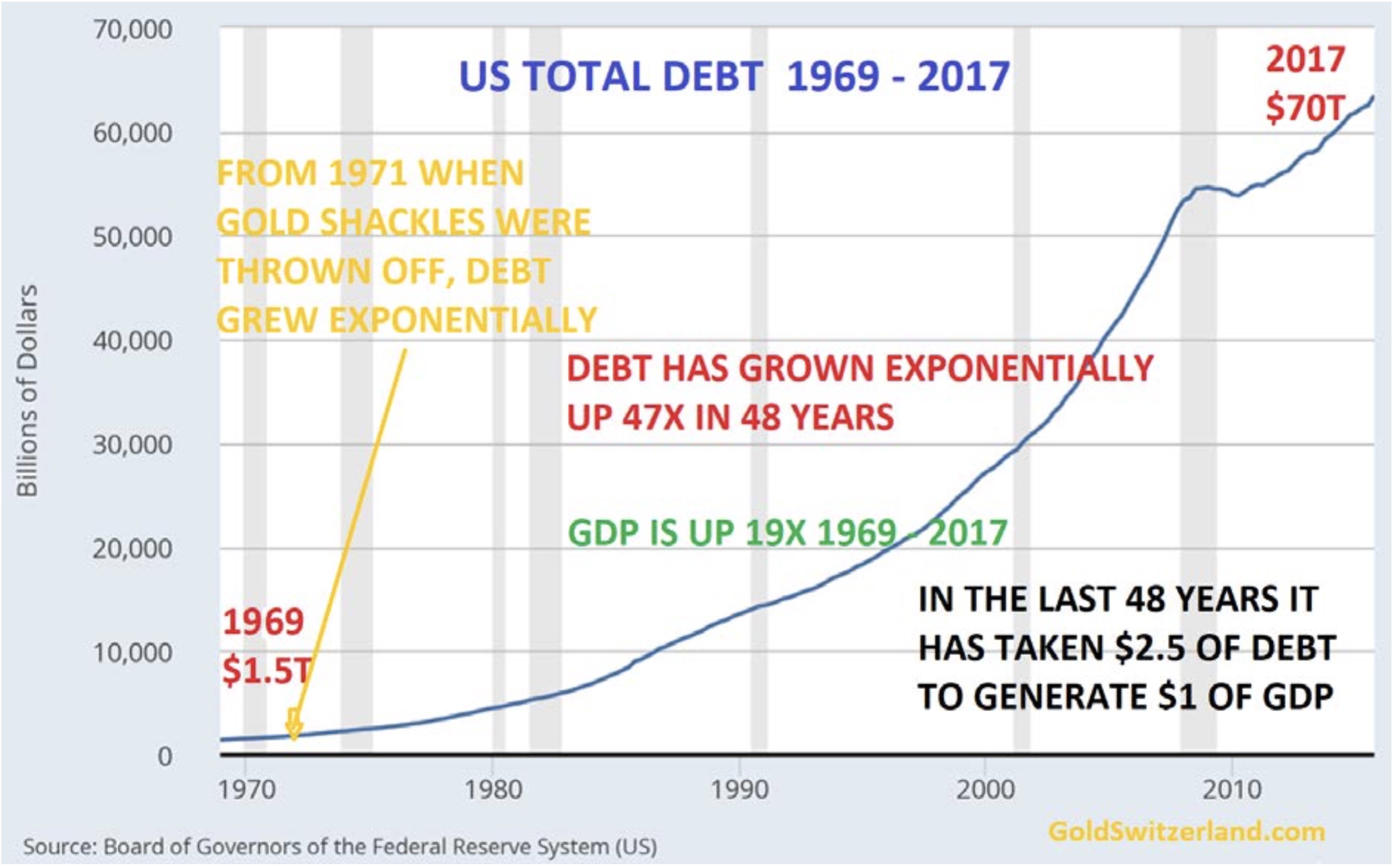 As the chart shows, more and more printed money is needed to grow GDP. The US is now running on empty. No wonder stocks have gone up 33X since 1969. All this manufactured money has not benefitted the real economy. Instead it has gone to the bankers and the 1% elite.

But if we adjust GDP for real inflation based on Shadowstatistics, it looks even worse. As the chart below shows, real US GDP has declined 8% since 2006 rather than the 16% increase that the official figures show.

US total debt in 2006 was $45 trillion and is now $70 trillion, a 55% increase. If we compare that to the Shadowstats real GDP growth, we then have an 8% GDP reduction in the last 11 years against a 55% increase in debt. So regardless of how much money the US prints, it no longer has an effect.

The $2.5 Quadrillion Black Hole
Based on the laws of nature, this makes total sense. If you print money which is not a substitute for a service or goods, it has zero value and cannot generate any growth in GDP. This has nothing to do with real money but is a certificate of fraud and deceit. The majority of the $2.5 quadrillion of debt, derivatives and liabilities outstanding today belong to that category. Once the bluff of the world monetary system is called, all that $2.5 quadrillion will disappear into a black hole together with all the assets that were inflated by this debt.

Coming back to the question about what the best investment is for the next 48 years, one thing is certain, gold will continue to preserve wealth and maintain purchasing power as it has done in the last few thousand years. But if we take the next 10 years, gold (and silver) is likely to vastly outperform most conventional assets like stocks, bonds and property. The Dow is now the most overbought it has been in over 60 years, with gold and silver artificially depressed by a fake paper market.

$10,000 Gold And Beyond
Gold has been in an uptrend for 18 years, since 1999, with a 4 year correction ending in 2015. The uptrend has resumed and will soon accelerate with gold reaching at least $10,000 in today’s money. But we are unlikely to have funny money in the next few years as governments print 100s of trillions or quadrillions of dollars in their futile attempt to save the financial system. This will take the gold price to levels which seem unreal today whether that is $100s of millions or trillions. In real terms those levels are meaningless. What is more important is that gold will preserve purchasing power and save people from a total wealth destruction by holding bubble assets or money in the bank.

So to me it is totally clear and I would advise everyone who has capital to preserve that they should put it into gold today. This is also the best gift to give to your children and grandchildren as long as they save the gold for at least 5 years or longer.

Finally, here is a chart which confirms this is a unique point in history for investors to swap massively overvalued stock market investments into the best wealth preservation insurance that anyone can buy — gold. The Dow / Gold ratio crashed by 87% from 1999 to 2011. After a weak correction, the ratio is still down 60% since 1999. Thus, gold has vastly outperformed the Dow over the last 18 years. The current correction up could go slightly higher but it is now very stretched and the downside risk is massive. I expect the ratio to go below the 1980 level of 1:1 and probably overshoot to 0.5. That means a further fall of the Dow vs Gold of 97%! 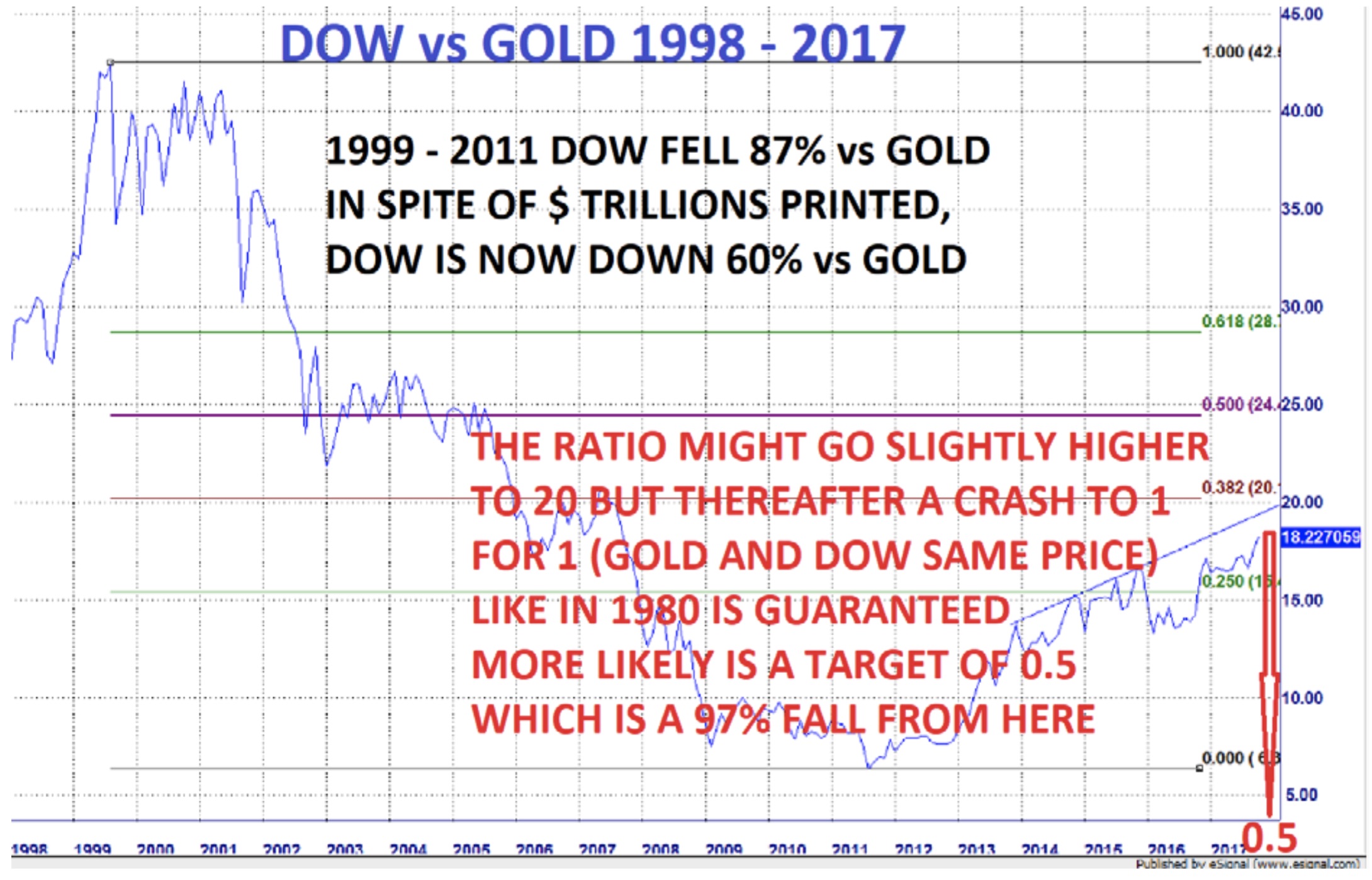 The Opportunity Of A Lifetime
Thus, the decision is really easy. The risk of holding bubble assets like stocks, bonds and property is now at a historical extreme. The easy and correct contrarian investment is to buy and hold gold (and some silver). This will not only save investors from total wealth destruction but also create incredible opportunities to buy bombed out paper assets which have plummeted to only 3 cents on the dollar vs gold, which will create one of the greatest wealth transfers in history for holders of gold. Investors must not miss this opportunity of a lifetime.

Gerald Celente – The Great Panic Of 2015 Is Now On