Here is what is happening across the globe and it is shortages, inflation and stagflation.

The Real Reason For The Big Jobs Miss
September 7 (King World News) – Peter Boockvar:  I’m just not buying the belief on the part of some that Friday’s big jobs miss was predominantly due to Delta. The front page of the weekend FT said “US Employment Growth Slows Sharply as Delta Variant Ravages Hiring Plans.” The NY Times said “Hiring Rate Slows as Grip of Variant Hinders Recovery.” The WSJ front page said “Delta Variant Throttles Job Growth” but at least said this underneath the headline, “Services sector was especially hit, but employers show high demand for workers.”

That last comment is what I believe explains the miss, not Delta. With respect to no job gains in leisure and hospitality, while I’m not discounting the influence of Delta on consumer behavior for some and the supply problems out of Asia because of Covid dictated restrictions, I’m mostly blaming the lack of workers. In that same FT, page 8 headline, “Marriott Fights to Find Staff for US Hotels.” They need to fill 10,000 openings at 600 hotels. Disney’s Shang Chi did $90mm in US and Canadian movie theaters over the long weekend, well above expectations. I highlighted the NFIB August survey on Friday where Plans to Hire hit a 48 yr record survey high. Positions Not Able to Fill, a 48 yr record survey high and in turn Compensation at a 48 yr record survey high…

Many global bond markets are realizing the same thing I believe. On the heels of some less dovish ECB comments last week and ahead of Thursday’s ECB meeting, European bond yields are higher again. The German 10 yr bund yield is up by 4 bps to -.33%, the least negative in almost two months. 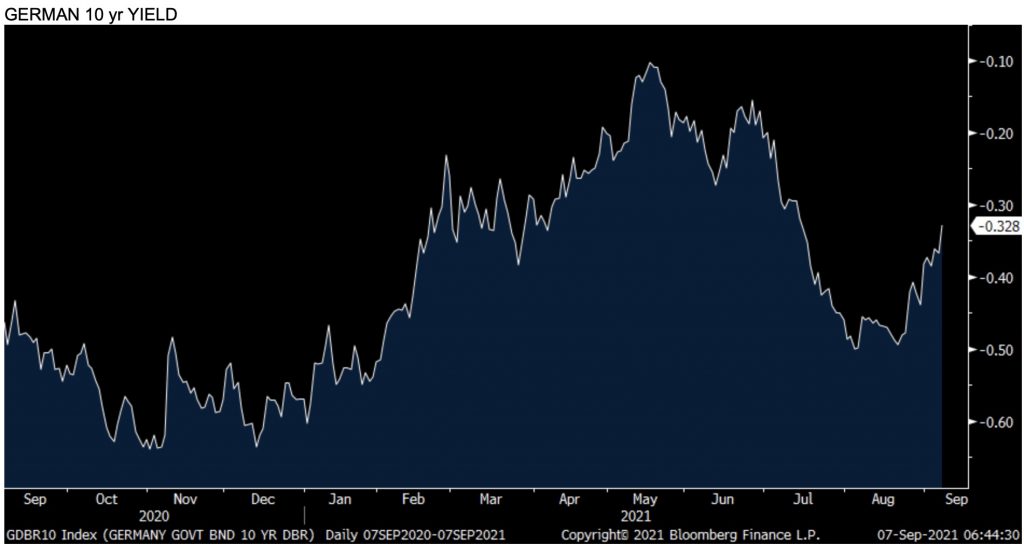 The French 10 yr oat yield is also higher by 4 bps and is back above zero. 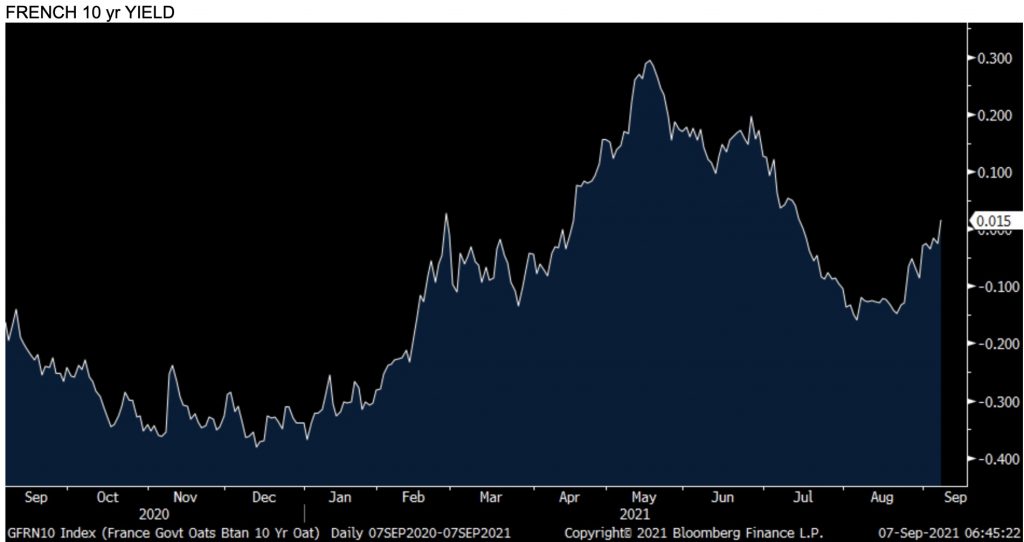 In turn, US yields are higher after Friday’s jump. The 10 yr US yield is up 4 bps for the 2nd straight day to 1.36%, a level last seen on July 14th, the same day current yields were last seen in Germany and France. I’ll say again, we’re all in this bond bubble boat together. With respect to inflation expectations in the Eurozone, there was a 5 bp jump yesterday in the 5 yr 5 yr Euro inflation swap to 1.76% but it is giving back 3 bps of that today. Still, we are teasing here with the highest since January 2017. 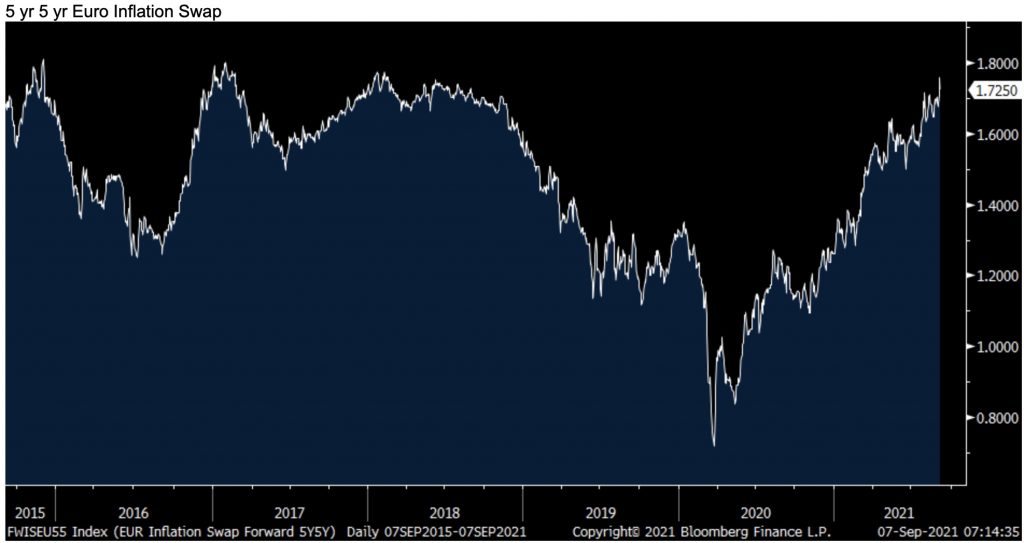 The German ZEW September investor confidence index in their economy softened to 26.5 from 40.4 and below the forecast of 30.3. The Current Situation though rose to 31.9 m/o/m from 29.3 but just below the estimate of 34. It’s not Delta that is being blamed here for the fall in Expectations, it is the supply side. ZEW said:

“Global chip shortage in the auto sector and shortage of building material in the construction sector have caused a significant reduction in profit expectations for these sectors. This may have had a negative effect on economic expectations.”

More evidence of stagflation but there was a sharp drop in inflation expectations on the part of investors who remain in the ‘transitory’ camp. I’d prefer to hear what IFO has to say as they are asking companies directly in what they are seeing. The euro is unchanged today.

Taiwan just can’t make enough semis but are still pumping out what they can. Aggregate exports in August rose 27% y/o/y, above the estimate of 23%. Imports jumped by 46%, well more than the forecast of up 30%.

China also reported better than expected trade figures. Exports rose 25.6% y/o/y vs the estimate of up 17.3%. Imports grew by 33.1%, above the estimate of up 27%. The factories in both China and Taiwan are pumping out all they can and electronics, semi’s and clothing are driving the demand.

Now where there have been tougher Covid restrictions in place, that of course directly influences the service sector. In Japan, household spending in July rose .7% m/o/m, well below the estimate of up 2.4% and only partially offset by an upward revision of .8% to June. Luckily though, wage growth was better than expected in July. The Nikkei is getting close to 30,000 again.

The Reserve Bank of Australia chose to follow thru with its taper, cutting weekly bond purchases to A$4 vs A$5 currently and will extend this pace to February. So less QE but extended out and net result in this ‘dovish taper’ is a lower Aussie$. The 10 yr yield was flat but at 1.26% the yield is at the highest since mid July. The RBA is acknowledging the strict lockdowns in Australia and its impact on growth but said “This setback to the economic expansion is expected to be only temporary. As vaccination rates increase further and restrictions are eased, the economy should bounce back.”