Today Art Cashin discusses a world on the edge of panic.

A World On The Edge Of Panic
October 30 (King World News) – Here is today’s note from legend Art Cashin:  On this night in 1938, America became transfixed by a radio program. Well, maybe transfixed is a little limp. The more accurate description would be hysterical.

The program was the handiwork of a 23 year-old genius named Orson Welles. It was a dramatization of a book by another Wells (H.G.) called “The War of the Worlds”. To make it modern, the young genius presented the play as a series of news bulletins from the field, interrupting “Regular Programming”. 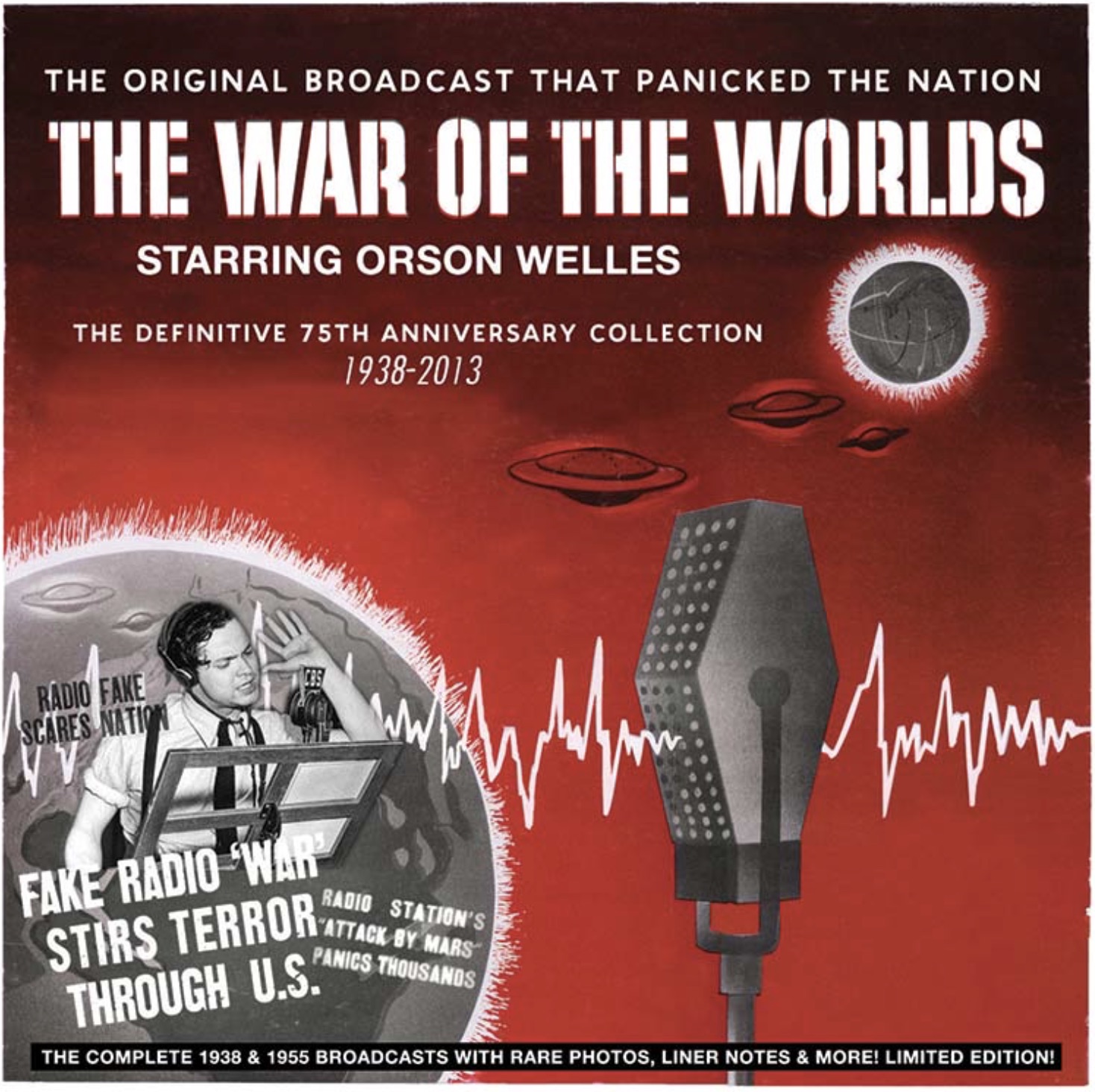 Welles explained the whole thing when the “Mercury Theatre” went on the air at 9:00 p.m. but, ironically, most of his eventual million and a half listeners were not tuned in at 9:00 p.m. Most were still listening to Edgar Bergen & Charlie McCarthy on another station. (Even then networks feared channel zappers or dialing dervishes, as one wag called them – – the solution: run your program a little into the other guy’s time zone…run the popular Bergen and McCarthy from 8:35 till 9:05 after “Mercury” had begun…–that’ll hold’em. Well, as usual the experts were wrong, it didn’t hold anyone; it just made ’em tune in late.)

About 9:07, a million dials switched to Welles’s program. But by then the introductory explanation was over. What they heard was the “band” of “Ramon Raquero” playing from some ballroom. Suddenly an interruption – – “We take you know to Grovers Mills, New Jersey where strange objects are reported to have landed”. A “reporter” with a tinny “Dan Rather” voice revealed authorities were heading to the scene – – “And now back to our broadcast.”

Skillfully, Welles began to weave back and forth. Bulletin – – Broadcast – – Bulletin – – Broadcast. Each Bulletin getting longer and more frantic. “We take you now to Washington for a special broadcast on the national emergency ……” (Remember Europe was at war. Newsreels hinted of the secret development of death rays.)

A New Jersey man near Grovers Mills mobilized himself; took a shotgun and a jug and went out to “blow away them Martians”. What he did manage to blow away was the local water tower (a common mistake made by Martian hunters with jugs).

Theaters closed in mid-performance as word spread to non-listeners. The program was so believable even the authorities were fooled (The Governor of Pennsylvania offered troops to the Governor of New Jersey.) Panic lasted all night in some places. Burning garbage dumps in what are the now the gentrified meadowlands of New Jersey were cited as proof of the Martians burning looting and killing. (Them Martians are crazy about empty Chef Boyardee cans.) 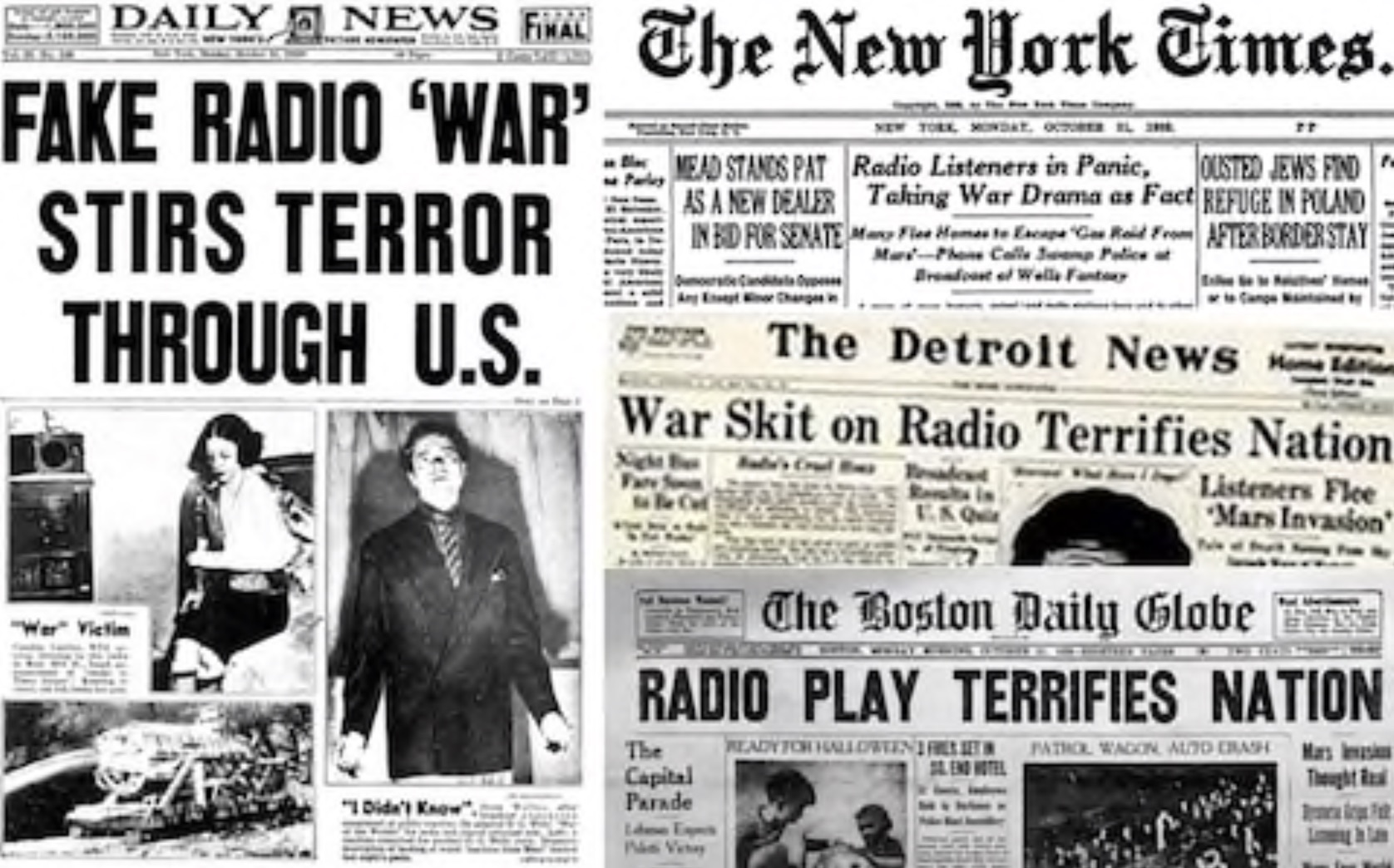 The panic was so pervasive that the next day the Federal Government called in all three major networks and ordered them never to use news bulletins in dramatizations again. (If it happened today there’d be marches on the White House and charges of 1st Amendment abuses and suppression of artistic integrity. Headlines might blare President forbids Seinfeld to have coffee with Aliens.) Back then the networks just said “Yes Sir”.

And maybe that was good. In 1947, the citizens of Ecuador panicked when Radio Quito adapted and rebroadcast Welles’ script. When they found out it was “just a program”, they marched on the station and burned it to the ground killing one broadcaster and maiming several.

To celebrate stop by the Marshall McLuhan Lounge and have a couple of kettles of witch’s brew. But even if you see little green men – – don’t tell anybody – – people (and markets) sometimes overreact.

There weren’t any Martians on the floor yesterday – or at least no more than normal. But there was more than enough black magic to go around.

Tariff Talk And Technical Breaks Send Indices Into Near Freefall – Stocks began the Monday session with a gap higher opening, aided by some clear strength in European markets.

After the gap opening, stocks continued to rally for the first thirty minutes of trading. That brought stocks to what would be the session highs.

When the post-opening rally rolled over, the weakest performance was in the Nasdaq, where the selling in the FANG stocks was most pronounced.

By noon the Nasdaq had slipped into negative territory and that clearly began to weigh on the other indices.

Around 2:00, Bloomberg ran a story that President Trump was considering across the board tariffs on all China goods, if no deal was struck shortly.

Bids canceled across the floor and stocks fell smartly lower in that vacuum.

The next step came when they took out Friday’s intra-day lows. That’s when the trapdoor opened.

The Dow bottomed at -566 and then they turned in a vee reversal. The late rally attempt brought most of the averages right back to the level of Friday’s lows. A textbook technical move. Stay tuned!

Action in Europe is also mixed in rather light trading. London is fractionally higher, while Paris and Frankfurt are seeing fractional losses.

Among other assets, Bitcoin is lower, trading around $6350. Gold is also lower, trading near $1220. Crude remains under some mild pressure with WTI trading below $67. The euro is a shade weaker against the dollar, while yields are up a tick or two.

Consensus – China currency is nearing 10 year lows. That may draw White House comments. Yellen due to speak but not until after markets close.

ALSO JUST RELEASED: Greyerz – Dow Tumbles More Than 500 Before Recovering Some Losses But One Pro Says There Is More To Come On The Downside CLICK HERE TO READ.