Put Things Into Perspective
May 10 (King World News) – Otavio Costa:  Always important to put things into perspective: Nasdaq has already declined almost as much as it did during the March 2020 crash. Back then, the Fed was all about saving the stock market and the economy. Today, it’s all about how much more they are going to hike rates.

LOOK OUT BELOW!
Nasdaq Has Only Declined 27%, Less Than
March 2020 30% Crash When Fed Was All About
Saving Stock Market & Economy. Today
It’s All About Interest Rate Hikes. 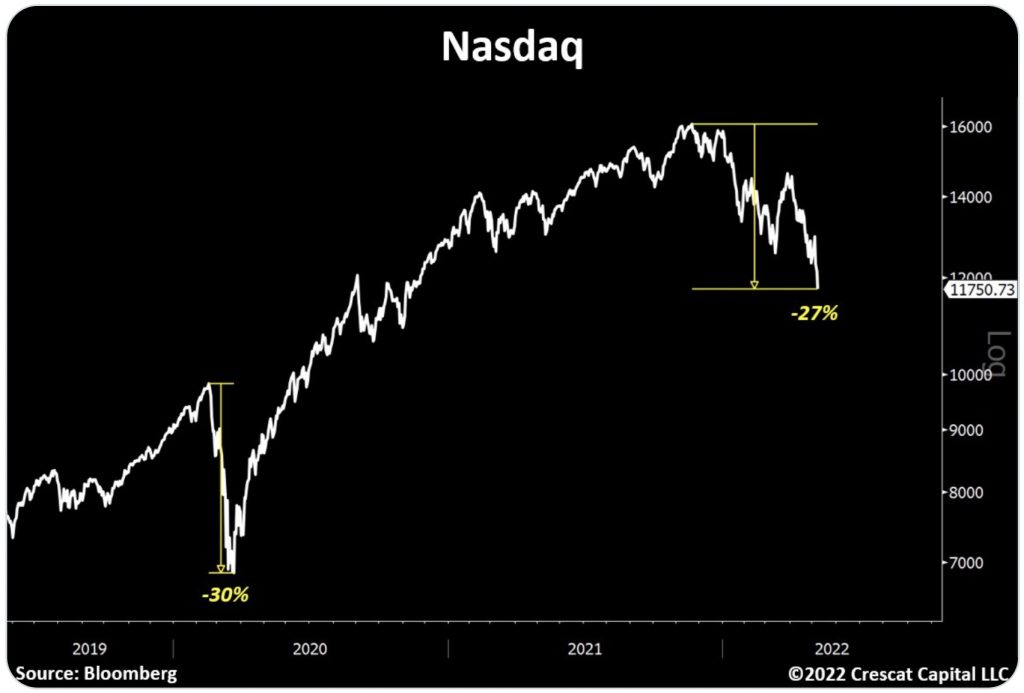 Here Comes The Pain
Peter Boockvar:  So we are now beginning to see the next step of how an economic slowdown cycle begins. We’ve had the macro shocks of inflation, supply disruptions and war and now we see signs that cost cuts are coming as it won’t just be price increases that will be used for companies to regain their lost profit margins. The CNBC story yesterday on Uber where the CEO told its employees that “We will treat hiring as a privilege and be deliberate about when and where we add headcount. We will be even more hardcore about costs across the board” was particularly noteworthy.

I’ve heard a few others say similar things on earnings calls but assume this is just the beginning in this shift in thought. Also assume that every single VC out there is telling its portfolio companies that it’s time to stop focusing on TAM and anything goes customer acquisition costs and it’s instead time to buckle up and focus on a path to profitability sooner rather than later. This all said, there are still situations where businesses, particularly smaller ones who are having a tougher time competing on the wage front, need more people as seen in last week’s ADP report (and see the NFIB comments below).

The NY Fed released its April monthly consumer expectations survey. One yr inflation expectations fell 3 tenths to 6.3% from March but longer term expectations of 3 years rose 2 tenths to 3.9% with the likely reason being the decline in expectations for the price of gasoline at the pump (even though AAA yesterday said the average gallon of gasoline is at a record high). 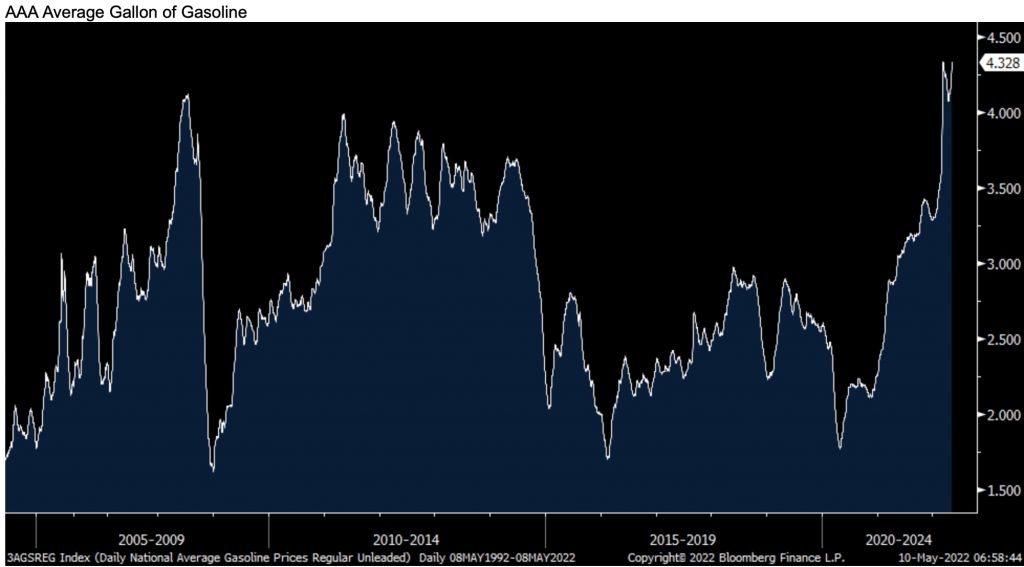 Home price expectations were unchanged at 6%. Expectations for rent increases rose to a new series high to 9.1%.

On the jobs front, earnings growth expectations were unchanged at 3% and there was a slight one tenth rise in unemployment expectations but to its highest read since February 2021. The NY Fed said “The increase was driven by respondents over the age of 40.” On the other hand, “the mean perceived probability of losing one’s job in the next 12 months decreased by 3 tenths” to match the series low also seen in February.

Consumer spending growth (in nominal terms) rose 3 tenths to 8% while income growth was higher by one tenth to 3.1%. Of note in filling the gap, “Perceptions of credit access compared to a year ago deteriorated, with more respondents saying it is harder to obtain credit than one year ago.” The higher cost of capital means banks and non-bank lenders need to be more stringent with their standards…

Real Estate
None of this is market moving but the snapshot each month is worth watching, especially on inflation and how consumers are responding to higher prices. With respect to the much higher price of homes y/o/y now combined with the sharp rise in mortgage rates, yesterday Fannie Mae’s Home Purchase Sentiment Index was released for April and it fell to the lowest level since May 2020: “as surveyed consumers expressed heightened concerns about housing affordability and rising mortgage rates” to state the obvious. And it’s the first time buyer that is getting screwed the most.

“The current lack of entry level supply and the rapid uptick in mortgage rates appear to be adversely impacting potential first time homebuyers in particular, evidenced by the larger share of younger respondents (aged 18-34) reporting that it’s a ‘bad time buy home.” Also, the consumer perception on getting a mortgage “also decreased across nearly all surveyed segments this month.”

Bottom line again, the pace of home transactions is slowing as to be expected with the direction and pace of price changes the only question.

Economic Problems Continue
The NFIB April small business optimism index was unchanged m/o/m at 93.2, holding at the lowest since April 2020. 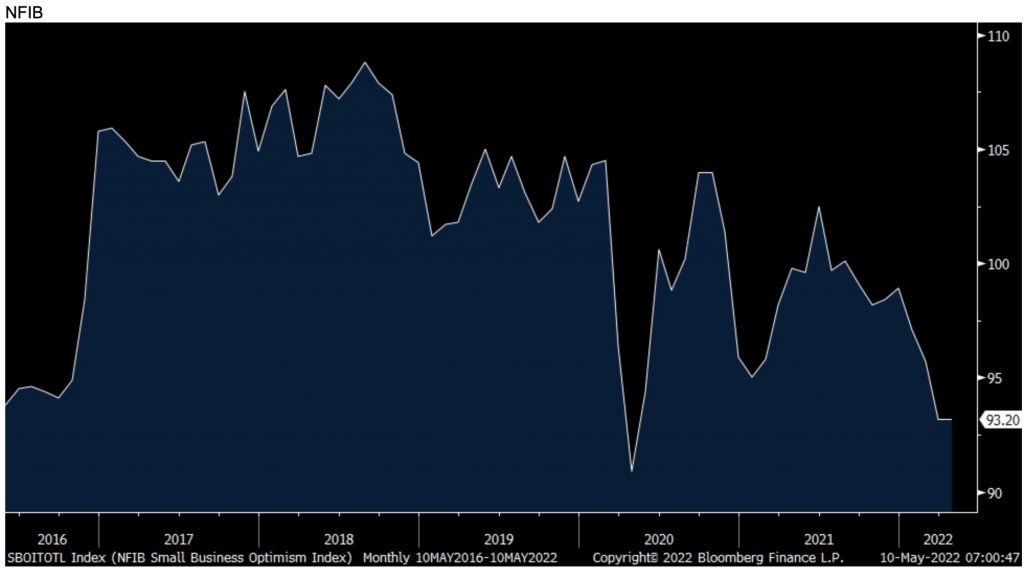 There was another 1 pt decline in those that Expect a Better Economy to a new record low in this survey to -50% dating back to 1974.

Those Who “Expect A Better Economy” Plunges
To Lowest Level In History! 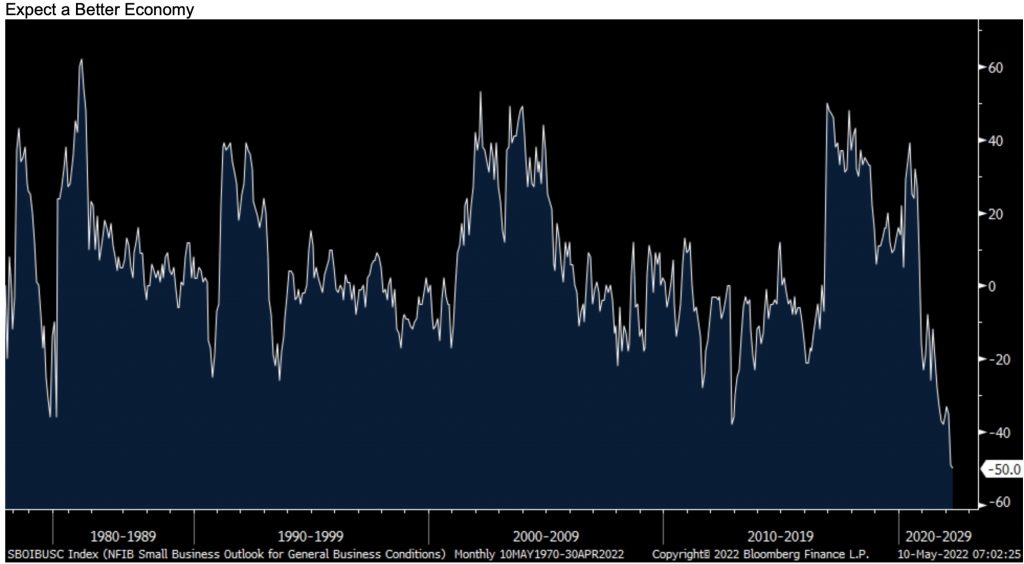 There was a less negative read on those that Expect Higher Sales but a 2 pt drop in it’s a Good Time to Expand. Earnings trends remained unchanged at -17%. As for the labor market, Plans to Hire was unchanged from March while the two compensation components moderated after the March rise. There remains a lot of job openings but no different than last month. Capital spending plans rose 1 pt but after falling by 1 pt last month and Plans to Increase Inventory fell 1 pt but current inventories rose 4 pts. With respect to pricing, Higher Selling Prices fell 2 pts but after rising by 4 last month to a record high.

“Small business owners are struggling to deal with inflation pressures. The labor supply is not responding strongly to small businesses’ high wage offers and the impact of inflation has significantly disrupted business operations.”

On the labor side:

“Of those hiring or trying to hire, 93% of owners reported few or no qualified applicants for the positions they were trying to fill.”

Finally, if business doesn’t pick up in the 2nd half of the year:

“This dampens capital investment and, eventually, will feed into employment if sales actually slow as expected.”

Remember what I pointed out last week, and with respect to big companies, there has been almost no change over the past month in the record high earnings per share figure that sell side analysts expect for 2022 for the S&P 500 companies.

Europe And Japan
Here’s another anecdote supporting my continued case that inflation will remain sticky thru next year. Nikkei news today is reporting that Taiwan Semi, the world’s largest semi chip producer, “is planning to raise prices by ‘single digit percentages’ across both mature and advanced chip production technologies, according to six people with knowledge of the matter.” They “will take effect by the beginning of 2023” and will range between 5-8%. By releasing this info now it “is to give customers some buffer to prepare for the price adjustments, while TSMC’s move to raise prices is to address increasing costs and capital needs for historic expansions.”

With rising costs even in Japan and limited wage growth, household spending fell 2.3% m/o/m, worse than the estimate of down 3.3%. The 10 yr JGB yield was little changed just under .25% while the yen is rallying, back under 130. A BoJ member today said they don’t plan on widening the YCC band as it would be the equivalent of a rate rise which apparently they still don’t want.

We know that the Fed is now an arm of the US Treasury, with the former helping to finance the latter. The ECB is a wing of European governments and former PM Shinzo Abe according to Reuters said today “that is was ‘totally fine’ to roll over the government’s huge debt sold to the central bank ‘because the BoJ is the government’s subsidiary.” With the BoJ owning more than half the JGB market, they still certainly are.

The May German ZEW investor confidence index in the German economy improved to -34.3 from -41 and that was better than the expected further fall to -43.5. “Thus, slightly less pessimistic” according to ZEW. The current situation though further deteriorated. With “a large majority of experts expecting an increase in interest rates during the next six months…they expect a decline of inflation rates from their very high current level.” We’ll see if ZERO rates or maybe even .25% by year end from negative -.50% can slow inflation I say sarcastically. European yields are falling, following the US Treasury rally yesterday while the euro is little changed at just above $1.05.

To listen to James Turk’s timely and powerful audio interview discussing gold, silver and why the next major financial crisis is imminent CLICK HERE OR ON THE IMAGE BELOW.