For investors to know how to allocate capital, it is very important to understand what the world will look like as it reopens.

Will It Be V, W, Or U Shaped Recovery
May 5 (King World News) – Jason Goepfert at SentimenTrader:  These days, it seems everyone has an opinion on the shape that the economy, and by extension the stock market, is likely to form over the coming months.

So far, it has been v-shaped in the major stock indexes, with a sharp fall followed by a sharp recovery. 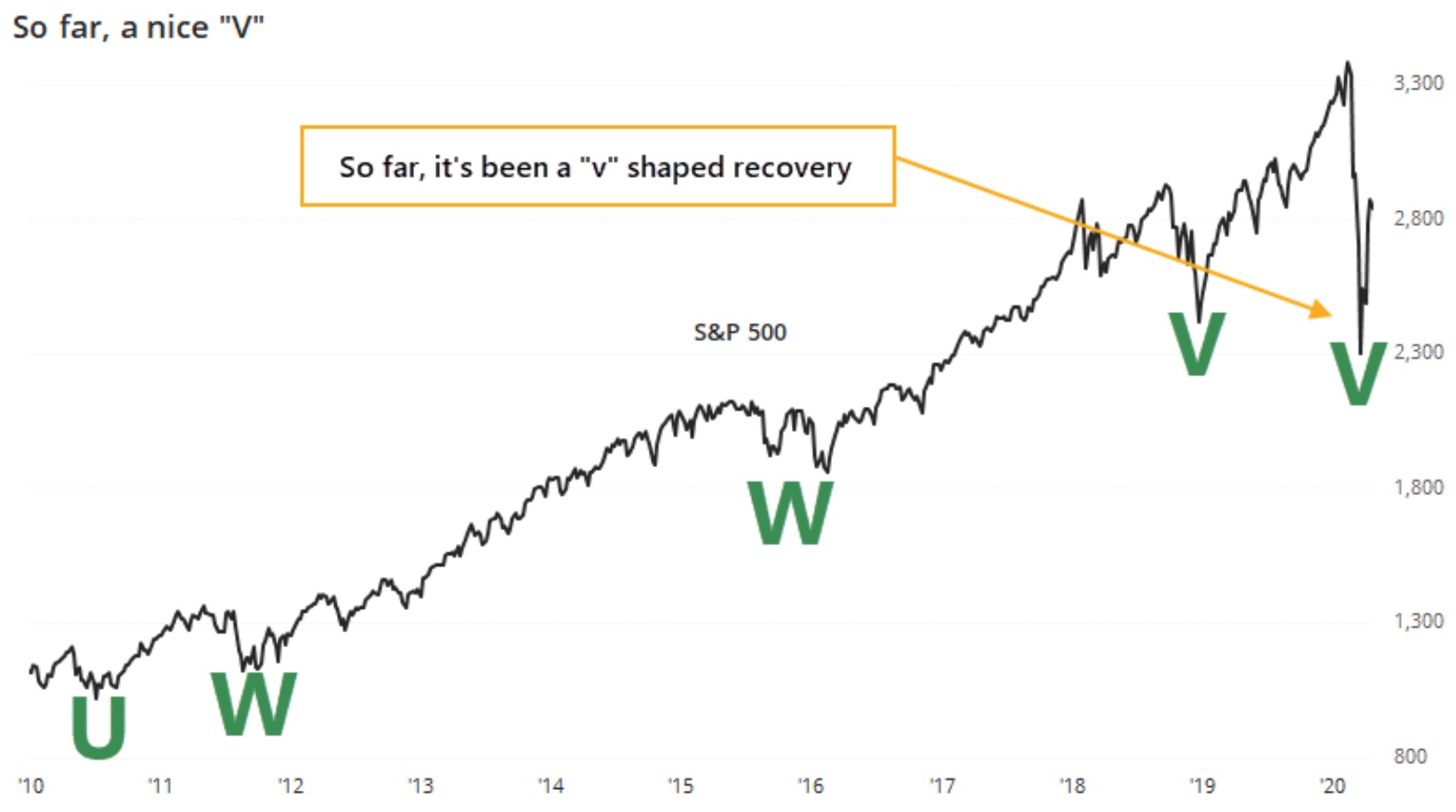 This is fairly atypical, but we went over multiple reasons why it could persist in March, mainly the types of breadth thrusts we were seeing, and the amount of decline the rally retraced. Those usually don’t see a fall back to the lows, which would form more of a “U” or “W” kind of bottom.

Based on media mentions, most analysts expect a recovery to look like either a “U” or a “V”.

But lately, a continued v-shaped recovery does not seem like a very popular opinion.

Maybe it’s neither, and we’ll see something else entirely…

There is a tendency to think that just because a v-shaped recovery might get a lot of attention, it’s less likely to happen. It’s hard to rely on this as an indicator, because most of it is anecdotal, and most of the articles mentioning that kind of sharp rebound are skeptical that it will happen.

If we take a more measured look, clearly it does get more attention, but it’s also clear that it probably doesn’t matter. 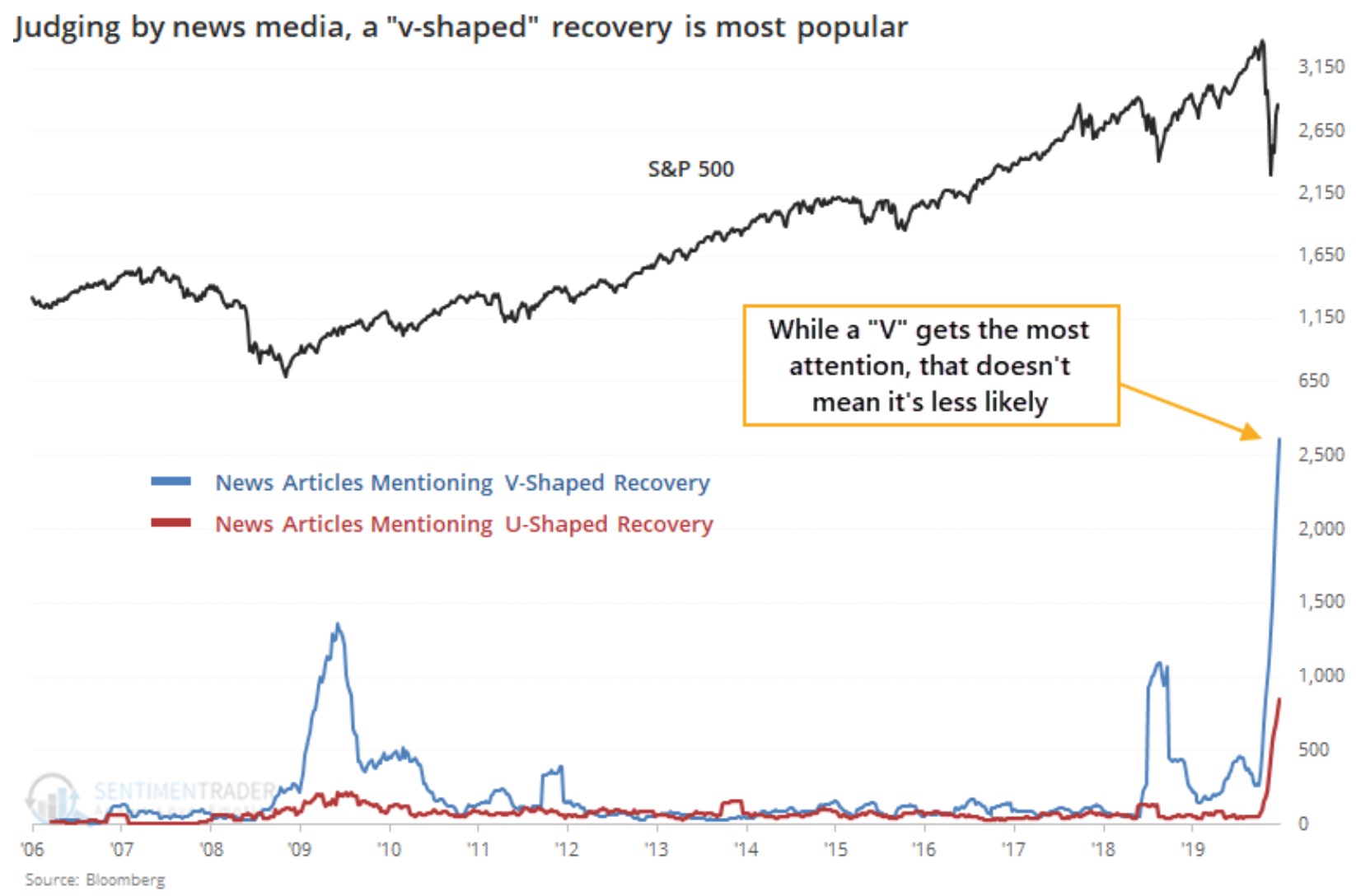 There has been a marked increase in articles mentioning other types of recoveries, but the “V” gets the most airtime. While we could be snarky and suggest that means it won’t happen, there is no basis for that assumption. After all, in 2009 there was a spike in articles about a v-shaped recovery as well, and most of those were similarly skeptical.

In early 2019, stocks rebounded swiftly, there was an increasing number of articles about the v-shaped recovery (with almost no mentions of a “U”) and stocks continued to power higher. On a relative basis, there were 25 times more articles about a “V” than a “U”, more than we’ve seen lately. 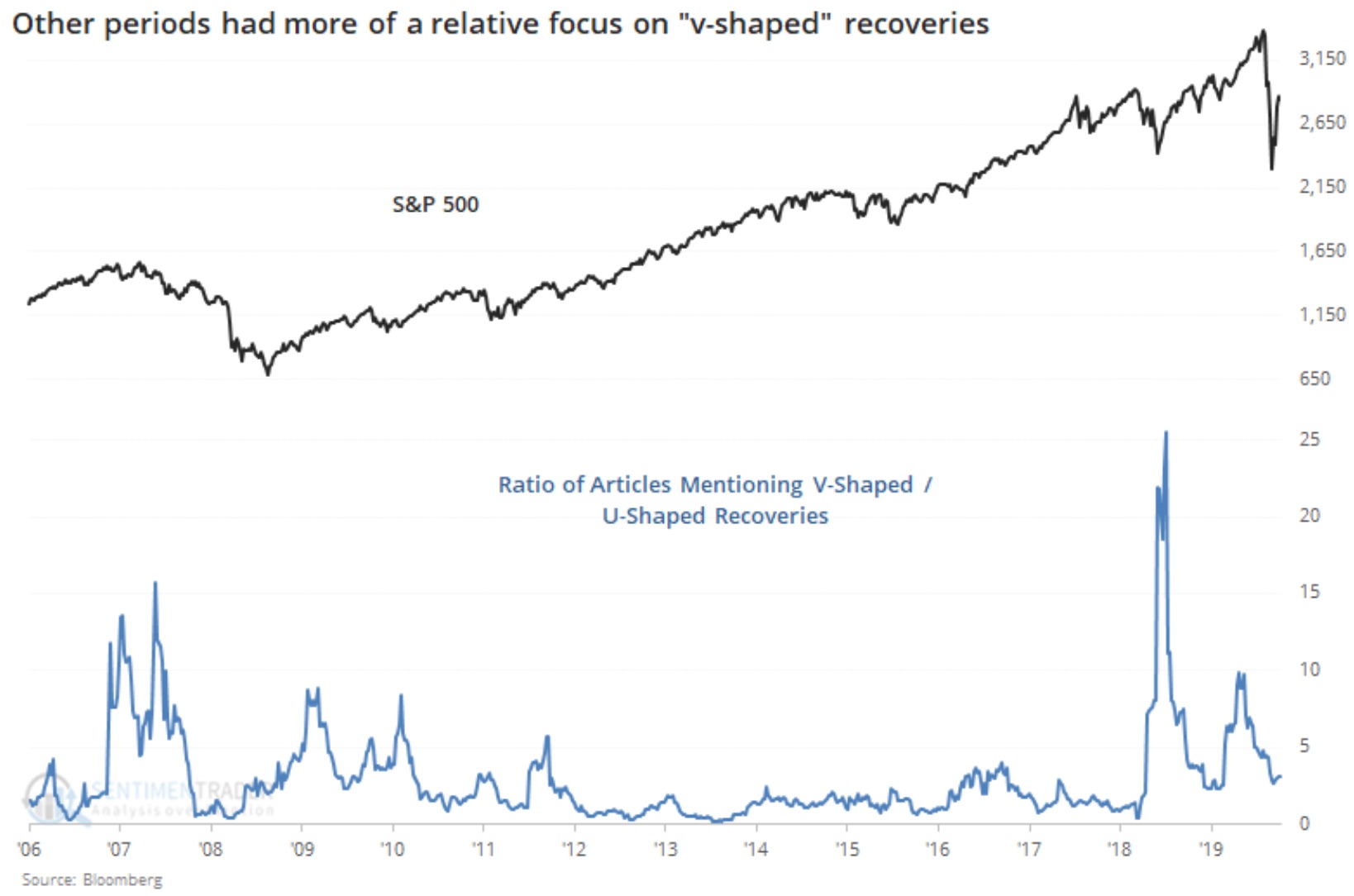 The ratio spiked in 2007, as well, but that was from a much lower base where even a handful of articles was able to skew the ratio. It also rose several times early in the post-2009 bull market, none of which meant that the “V” was going to fail.

Since the media is filled with talk about a v-shaped recovery, and most investors only skim the articles if they even click past the headline, there seems to be an assumption that most investors believe in that kind of recovery. They don’t. It’s probably a good thing that even though interest in a “V” is high, most of that interest is in dispelling it. …To subscribe to the internationally acclaimed work that Jason Goepfert produces at SentimenTrader CLICK HERE.