Today the man who has become legendary for his predictions on QE and historic moves in currencies and metals told King World News we have now entered the dangerous period and final endgame for the global financial system. Here is how much time is left. 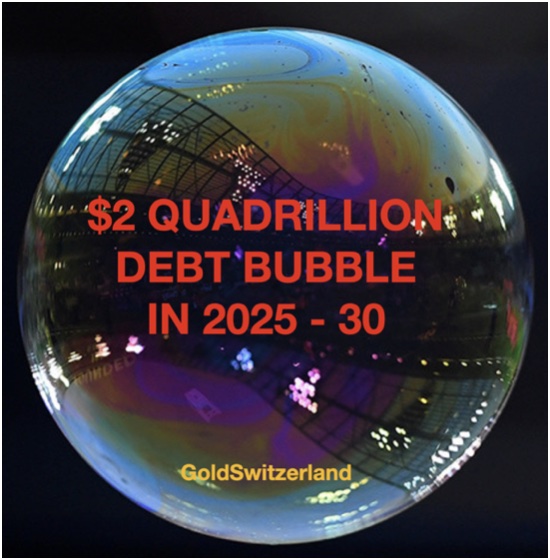 August 15 (King World News) – Egon von Greyerz at Matterhorn Asset Management (based in Switzerland):  Central bankers were handed the Midas curse half a century ago. Midas turned everything that he touched into gold, even his own food. Exactly 50 years ago (15 Aug, 1971), central bankers were handed a much worse curse by Nixon. But instead of turning everything into gold, their curse was to turn all real assets, including gold, into worthless paper.

But Nixon had of course not studied history. Because if he had, he would have understood that his lie was $100s of trillions worse than the Watergate lies:

As the chart below shows the dollar has lost 98% in real terms (GOLD) since 1971. Just a one hour history lesson would have taught Nixon that no currency has ever survived in history since all  leaders without fail have done what Nixon did.

Reminds me of the line in Pete Seeger’s song “Where have all the flowers gone”: 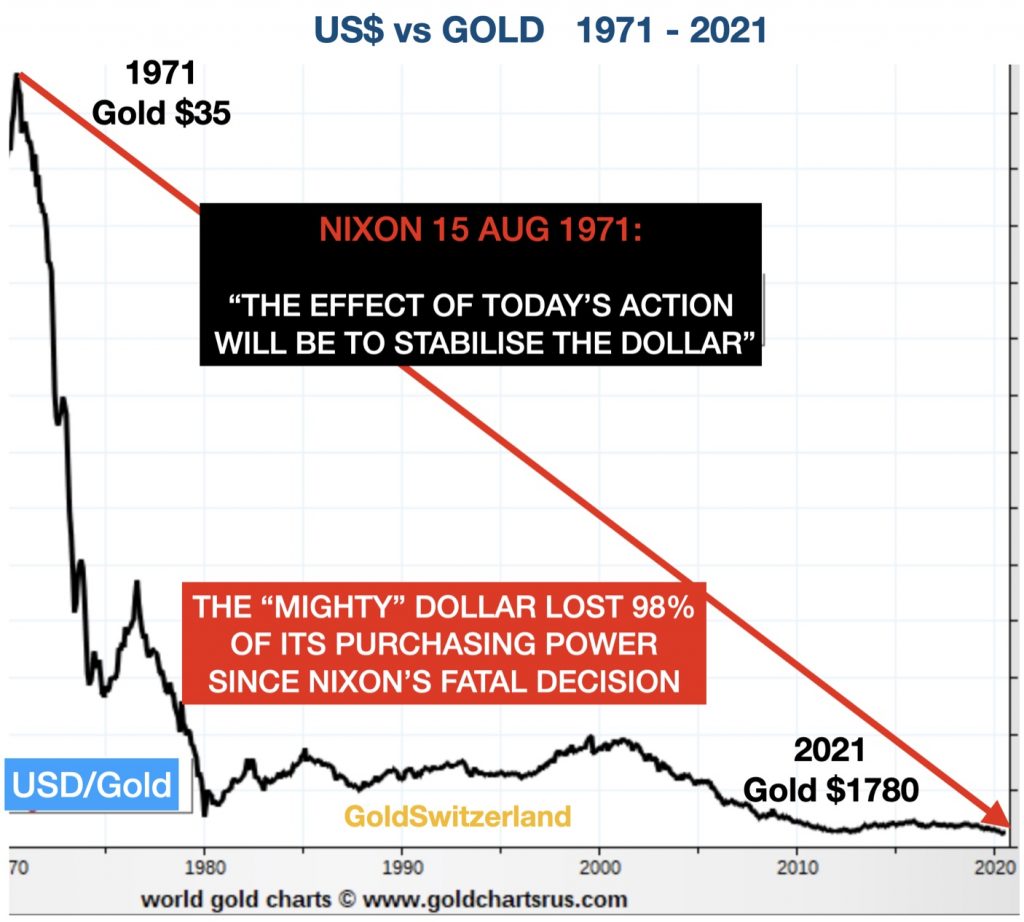 Well, they will never learn of course. History has taught the very few who are willing to listen that there is no exception. Every single currency throughout history has been debased until it has reached ZERO as I outlined here.

It seems incomprehensible that presidents and central bankers have not learnt they will all play the role that their predecessors have, in destroying the nations currency. With their arrogance, they are all obviously hoping that they can pass the batten on so that it won’t happen on their watch. And since most leaders have a relatively short reign in relation to the lifespan of a currency, they often escape even though guilty.

Nixon for example believed that he committed a good deed and stabilised the dollar. If he is looking down from above, he will now 50 years later, see that his actions have created a “mere” 98% fall so far…

So Nixon saved the dollar very briefly with the consequence of killing it forever! When will they ever learn?

A DYSFUNCTIONAL GLOBAL ECONOMY
The period after I was born at the end of WWII,  was followed by a long chapter of law and order in the West. This was not just in society at large but there was also order and discipline as well as courtesy in schools and families.

Today in many countries there is no respect for teachers, parents or even the police. All eras go through cycles and the worst part of the cycle is what we are experiencing now. Moral and ethical values are gone and crime is rampant. This is not new in history and regularly happens at the end of major eras or cycles. This happened, for example, at the end of the Roman Empire as Rome disintegrated economically and morally. Decadence was rampant then as it is today. So were debts and deficits.

So dissolution of values and principles are clearly a consequence of financial and economic dysfunction. The fact that the US has increased the federal debt every year since 1960 (with four minor exceptions) is a sign of chronic disease and total dysfunction. If the US government for over 60 years has become increasingly more decadent, both economically and morally, how can we expect the people to behave differently?

Many countries in the world have fared in a similar manner but because of the size of the US economy and the reserve currency status of the dollar, the consequences are considerably more significant.

CENTRAL BANKS ARE NOW IN THE END GAME
The song “I am forever blowing bubbles” was written in 1918, not long after the creation of the Fed. Clearly the composer saw it coming:

Pretty bubbles in the air,

They fly so high, nearly reach the sky,

It will be no different with the current bubbles. They have already flown so high and reached the sky. Just look at central banks’ balance sheets which are now going exponential:

As the graph shows, since the Great Financial Crisis started in 2006, the balance sheets of the four biggest central banks have gone up 6X. Since the current crisis accelerated in 2019, the growth is now EXPLOSIVE! 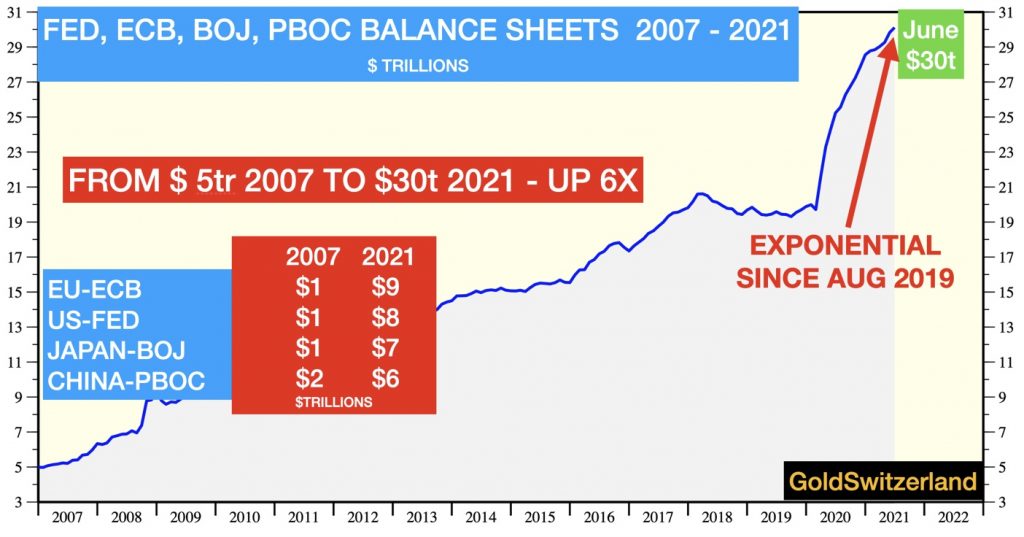 But it is not just central banks blowing bubbles. Because the whole world has become a bubble: 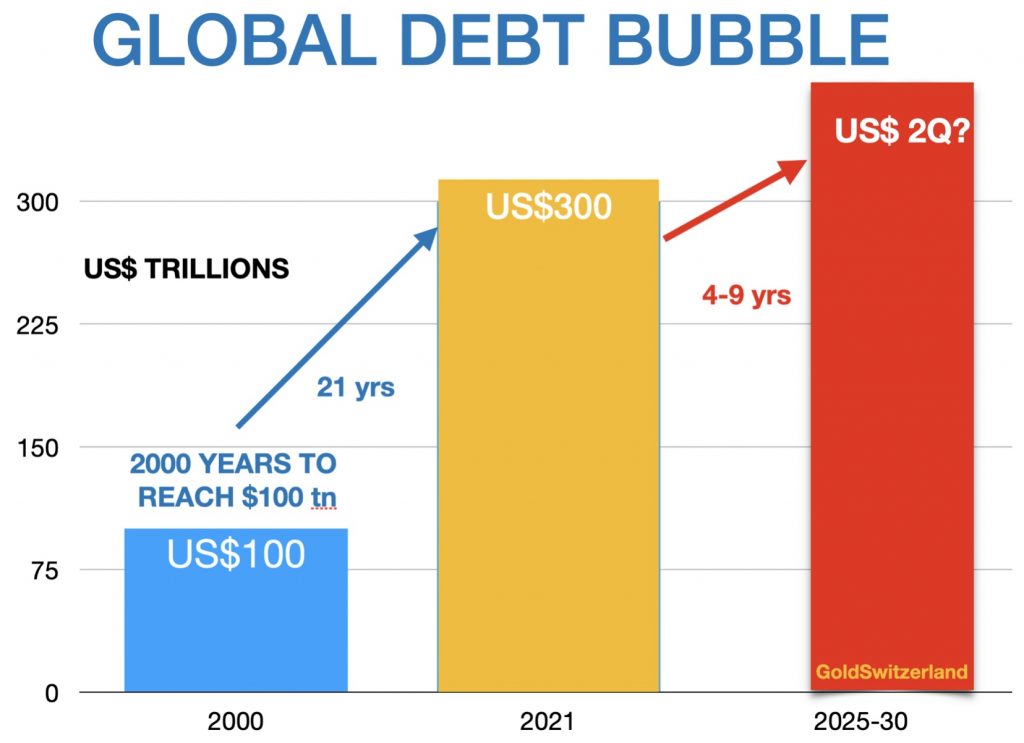 As you can see in the graph above, I am projecting $2 quadrillion or more in the next 4-9 years. Sounds massive and sensational but the math is simple. If we add unfunded liabilities of at least $200 trillion globally plus total derivatives of at least $1.5 quadrillion, that takes us to $2 quadrillion.

As the derivatives bubble explodes, or rather implodes, in the next few years, all that money will be printed by central banks in a futile attempt to save the financial system. 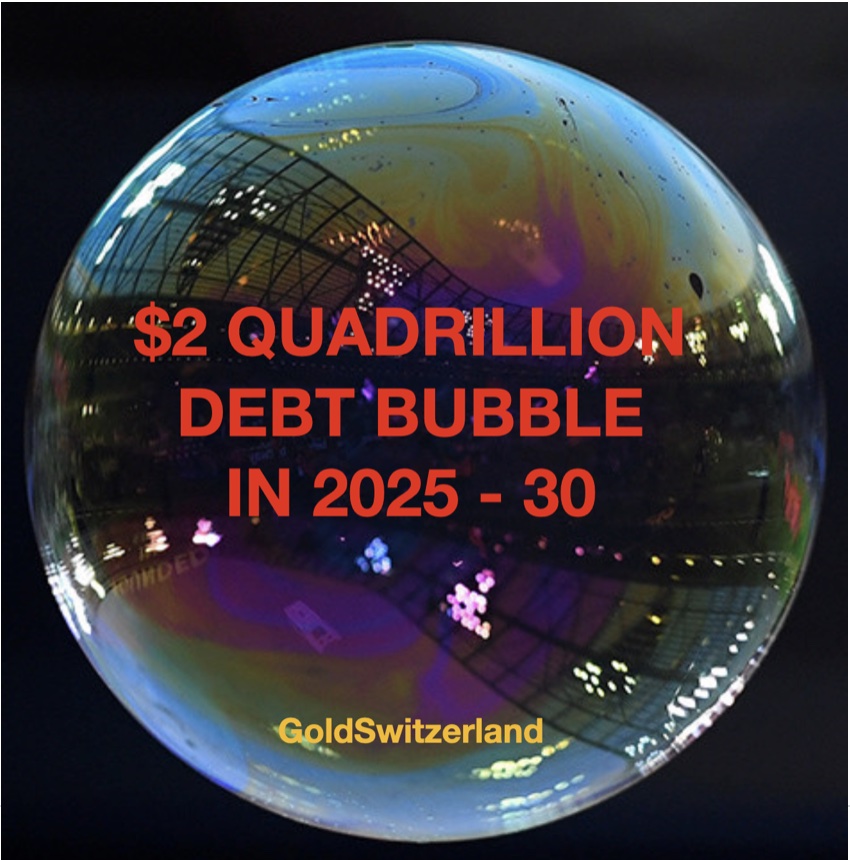 August 15, 1971 was the beginning of the End for the current economic era and currency system.

The Great Financial Crisis in 2006 was the start of the End of the End.

In August 2019, when central banks panicked and stated they would do whatever it takes, the final stage of End of the End started.

In the graph above I have indicated that this very final stage and end game of our current monetary system will terminate between 2025 and 2030. The end of a major economic era is of course impossible to forecast.

CONSEQUENCES – CONSEQUENCES
We have invested seriously in physical gold since 2002. We had the years leading up to this century studied global risk and carefully researched the best way to protect against this risk. Our conclusion was the financial and currency system was unlikely to survive based on our risk analysis which also included understanding history.

We are not gold bugs but see owning physical gold as the best protection against  the consequences of another failed financial and currency system.

As we discussed in our MAMChat last week discussing the gold flash crash, the attempt to depress the gold price by dumping $4 billion of paper gold was just the final part of a normal correction. 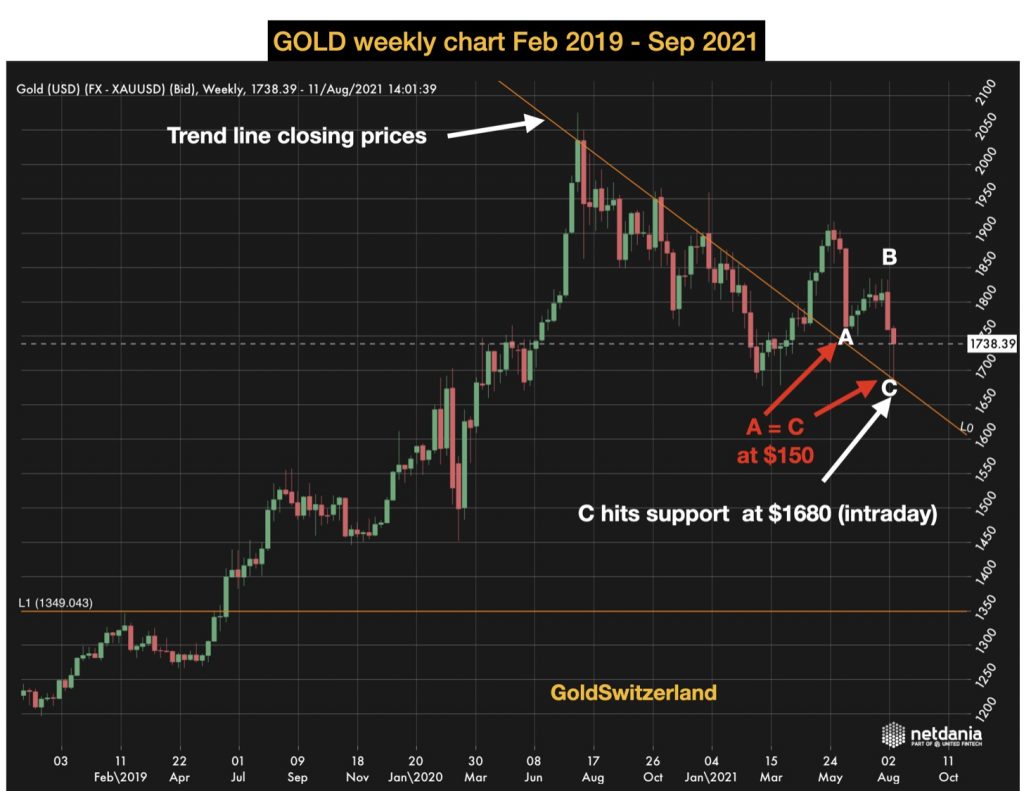 Our interest in gold is purely for fundamental reasons but sometimes it is interesting to look at technical patterns. The chart above shows that the corrective C-wave reached support at $1,680. That was probably the end of a minor correction and gold should soon start the move to the next target of $3,000. Rising above $1,900 will be confirmation of the resumed uptrend.

Gold has been in a secular uptrend since 1999 and no action by central banks can stop the move to levels that are unthinkable today.

But investors should not focus on what price gold could reach but instead how far their assets (stocks, bonds, property) measured in dollars or euros can fall.  In my view the falls will be much more than 50% and probably more than 90%.

Physical gold has always been the best protection against a failed currency and financial system. This time will not be different…This will link you directly to more fantastic articles from Egon von Greyerz CLICK HERE.