As we continue kicking off trading in the back half of 2020, more all-time records are being set and these are absolutely stunning charts!

ANOTHER RECORD: Now Exceeds 2000 Peak
July 14 (King World News) – Peter Boockvar:  As a long suffering value investor I didn’t know whether to laugh or cry when I saw this chart from my good buddy David Rosenberg yesterday in his daily Breakfast With Dave research. It’s the relationship between growth and value where the ratio now exceeds the 2000 peak. 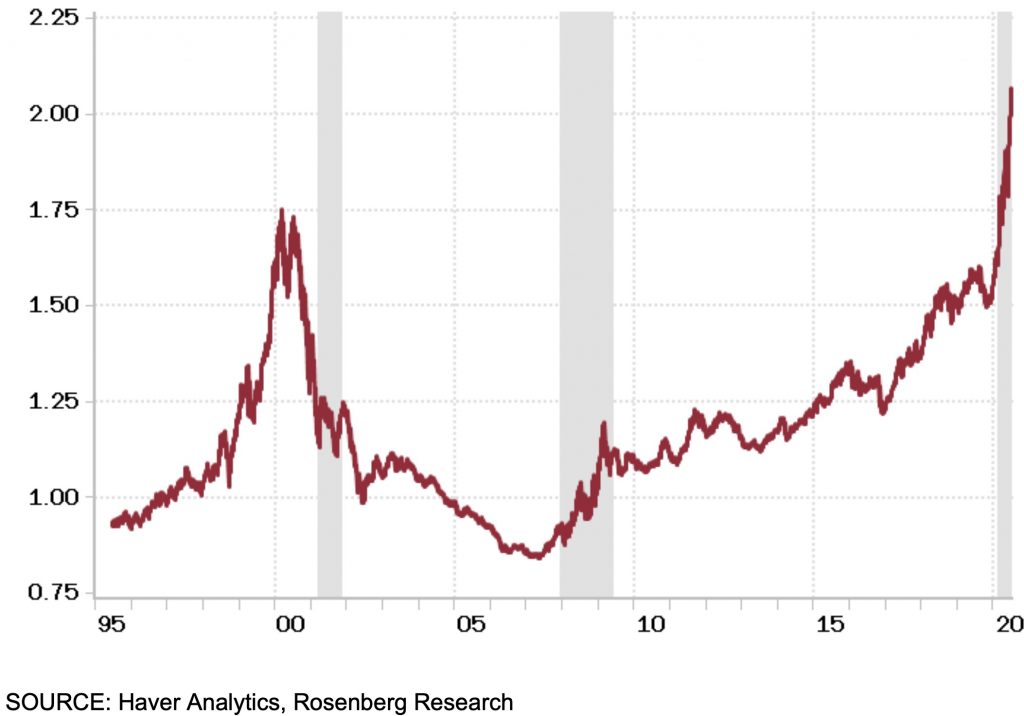 Parabolic
Yes, the California news yesterday afternoon about initiating reclosings (I was hoping to never have to use that word when I spent months saying reopenings) was certainly a catalyst for selling but it started before that at around 11:30am when Tesla, the current poster boy for parabolic tech moves higher, started to roll over. You don’t need to have an opinion on Tesla either way (the Twitter world is so entertaining to read on Tesla between bulls and bears) to know a parabolic chart when you see one. They typically all end in the same way, giving back the parabola move. We’ll see here. With respect to the reclosings, if we don’t get better with mask wearing, one can only imagine what the colder weather will mean come fall and its back inside we have to go. How much will have to reclose then? Also, just the prospect of having to reclose doesn’t bode well for business visibility.

Small Business Optimism
The June NFIB small business optimism index improved to 100.6 from 94.4 and that is the best since February when it printed 104.5. The economic reopening (before some of the reclosings we’re now seeing) was all over this report. Plans to Hire doubled to 16, Plans to Increase Inventory went to 7 from 2 and those that Increased Capital Spending was higher by 2 pts. Those that Expect a Better Economy, Higher Sales and said it’s a Good Time to Expand all rose m/o/m…

With many still collecting generous unemployment benefits, Positions Not Able to Fill jumped by 9 pts. Current Compensation though was unchanged but future plans rose by 3 pts. Those expecting Higher Selling Prices were up by 9 pts but still at -5. Lastly, and the lone but important negative within the report, Earnings Trends fell a further 9 pts to -35. This was -3 in January and it’s the lowest since 2010. Profit margins are getting squeezed at the same time revenues are still under pressure.

“Small businesses are navigating the various federal and state policies in order to reopen their business and they are doing their best to adjust their business decisions accordingly. We’re starting to see positive signs of increased consumer spending, but there is still much work to be done to get back to pre-crisis levels.”

China
China reported its trade data for June and both exports and imports and they were better than expected. Exports were up a slight .5% y/o/y but that was above the estimate of down 2%. Reopenings and the continued increase in exports in medical equipment and pharma helped. Imports grew by 2.7% y/o/y, well more than the forecast of down 9% and helped by a rise in commodity imports. Notwithstanding the beat in trade, Chinese stocks took a breather as did the rest of Asia following the US stock market reversal.

Europe
Shifting to Europe, the July ZEW investor confidence index in the German economy slipped to 59.3 from 63.4 but was about as expected. Current Conditions were up slightly but worse than expected at -80.9 vs the estimate of -65. Bottom line from ZEW: “The outlook for the German economy largely remains unchanged compared to the previous month. After a very poor 2nd quarter, the experts expect to see a gradual increase in GDP in the 2nd half of the year and in early 2021.” The more relevant IFO business confidence index is out next week. The euro continues to trade well vs the US dollar and is just below the best level since March.

Regarding The US Dollar
With respect to the dollar, it’s hard not to look at the alarming budget deficit number yesterday of $3 Trillion and not think how come the US dollar just keeps on weakening.

ANOTHER ALL-TIME RECORD:
US Budget Deficit As % Of GDP!

THE FED IS LYING TO YOU: “It’s Not Transient Inflation And They Damn Well Know It!”