As the world edges closer to the next crisis, today the man who has become legendary for his predictions on QE and historic moves in currencies, told King World News that the price of gold is about to skyrocket as we enter the “Dark Years.”

A World Living On Borrowed Time
August 26 (King World News) – Egon von Greyerz:  “This is it! The autumn of 2018 will be momentous in the world economy, markets and politics. We are now seeing the ‘Last Hurrah’ for stocks, bonds, the dollar and most asset markets.

The world economy has been living on borrowed time since the 2006-9 crisis. The financial system should have collapsed at that time. But the massive life support that central banks orchestrated managed to keep the dying patient alive for another decade. Lowering interest rates to zero or negative and printing enough money to double global debt seems to have solved the problem. But rather than saving the world from an economic collapse, the growth of debt and asset bubbles have created a system with exponentially higher risk…

Egon von Greyerz continues:  “So here we are on the “Eve of Destruction” when the fake measures that governments and central banks have taken have not saved the world, as the Keynesians believe, but instead created an even bigger bubble that is now about to burst. Curing a sick world by the same means that created the disease in the first place was always bound to fail.

Global problems of the magnitude that the world will experience in coming years normally start in the periphery. We are seeing multiple examples of local wildfires that will soon spread to the core of the world economy.

Take for example the VAT countries. Not Value Added Tax, but Venezuela, Argentina, and Turkey. Deficits, debts and currency collapse are the normal warning signals and these are certainly present at varying degrees in the VAT countries. As always, the best single indicator which reveals these problems is, of course. gold. As the chart below shows, gold in Venezuelan Bolivars is going up exponentially. Since May 2018, gold has gone up 23,000x or 2.3 million percent.

Since May Gold Has Risen 2.3 Milllion Percent In Venezuelan Bolivars! 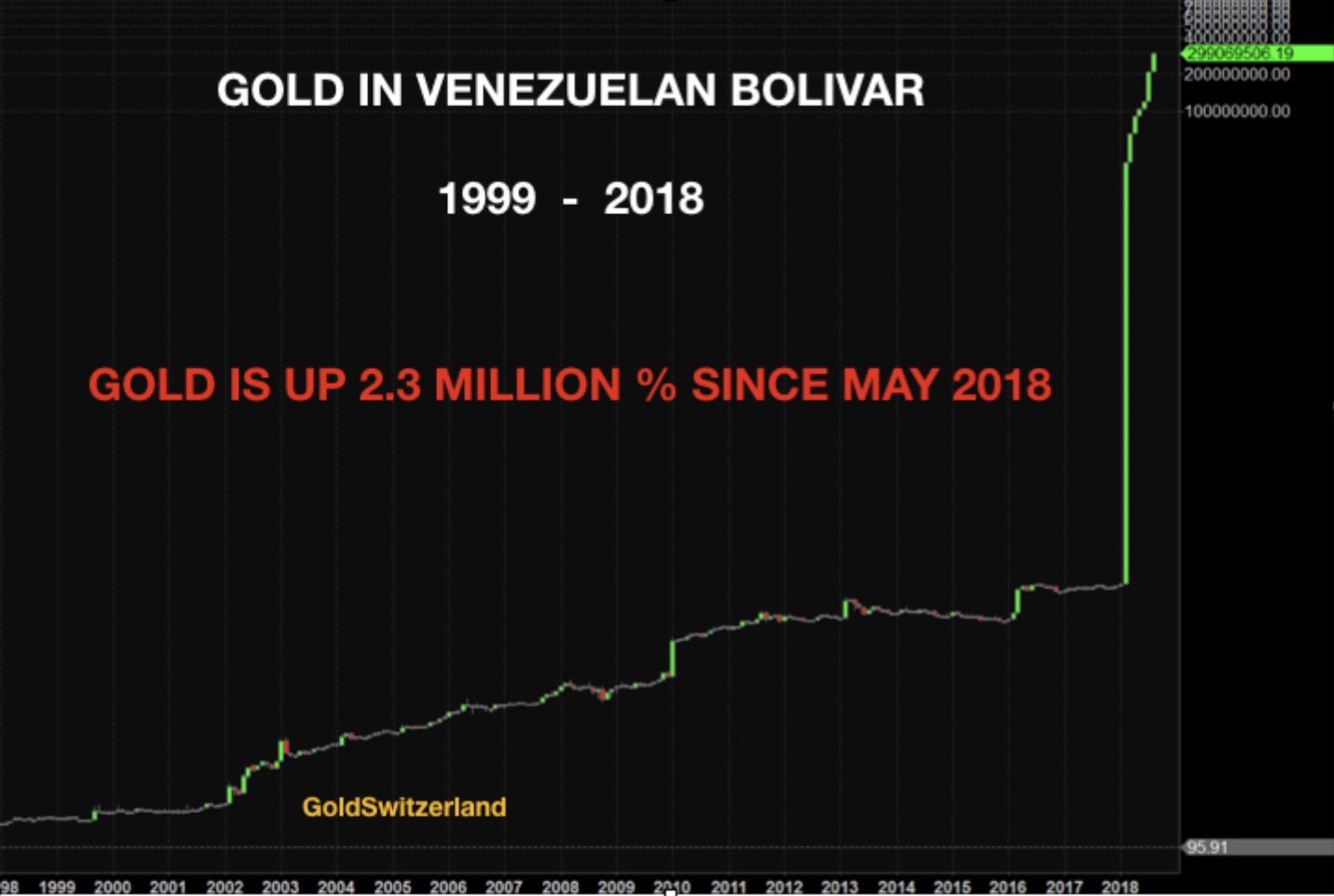 Argentina goes from one crisis to the next and gold is up 14,500% this century. Only since December of 2017, gold is up 74% in Pesos. Finally in Turkey gold is up 26% since May of this year and 3,500% since 2000. No wonder governments around the world hate gold. Because gold reveals their deceitful actions in destroying the economy and the currency.

The Real VAT Problem
There is blatant manipulation in so many areas including fake money, fake paper gold, fake news, fake politics and fake governments. The VAT countries are just one example but a very important one because they are giving us the signal that a global crisis has started. Most emerging market countries are in the same situation. In the next few months, emerging markets will drop one after the next.

The situation is the same in the West too. Europe is totally bankrupt. The EU is desperately trying to keep a collection of disparate nations together by coercion combined with forcing debt onto any nation that threatens to exit the EU or Euro. Greece and Italy should have left the EU long ago, introduced their own devalued currency and reneged on the debt to the EU. But they were stopped by Brussels. Now they will fall with the rest of the EU. The UK people voted to leave the EU but Brussels are using any means to stop that from happening.

An artificial collection of nations with very different people, cultures, history, ambitions, financial systems, growth rates, etc, was always doomed to fail. To have this hotchpotch of countries governed by an unelected and unaccountable elite in Brussels makes it even worse. The Swiss system with direct democracy and people power together with distribution of power to the Cantons (local States) is a much more efficient system.

The world could possibly cope with the major problems in Emerging Markets and Europe if the world’s biggest economy, the US, was sound. But, sadly, that is far from the case. The biggest economy is also the sickest. Federal debt has doubled every 8 years, which puts the US on target for a $40 trillion debt by 2025. I am well aware that this is substantially above the official forecasts but why pay any attention to these since they have always been wrong.

And the Federal debt seems to be $42 trillion rather than $21 trillion if the $21 trillion “lost” dollars are accurate based on Catherine Austin-Fitts’ findings. More likely is that problems in the economy combined with a financial crisis will lead to unlimited money printing and surging interest rates. So a US Federal debt in 2025 of $100 trillion or in the quadrillions is not impossible, especially when the derivatives bubble blows up.

$5 Trillion Will Have To Be Spent
Having personally crossed the collapsed Genoa bridge three days before the accident, one is reminded of the major underinvestment in infrastructure worldwide (and also how ephemeral life is). Italy will now spend EUR 80 billion, that they don’t have, to improve the country’s infrastructure. Driving around Italy you realize that this will be a drop in the ocean. Most countries have neglected infrastructure investments for a very long time. In USA for example, it is estimated by the American Association of Civil Engineers that $5 trillion needs to be invested by 2025 to fix roads, bridges, dams and other infrastructure. That is another $5 trillion that will be printed out of nowhere.

Since the global crisis has already started, we might see a collapse of markets, bubble assets and currencies at any time. Before that, it is possible that the final minor leg up or the ‘Last Hurrah’ will take place. That would involve a final move up in some stock markets and a temporarily stronger dollar. 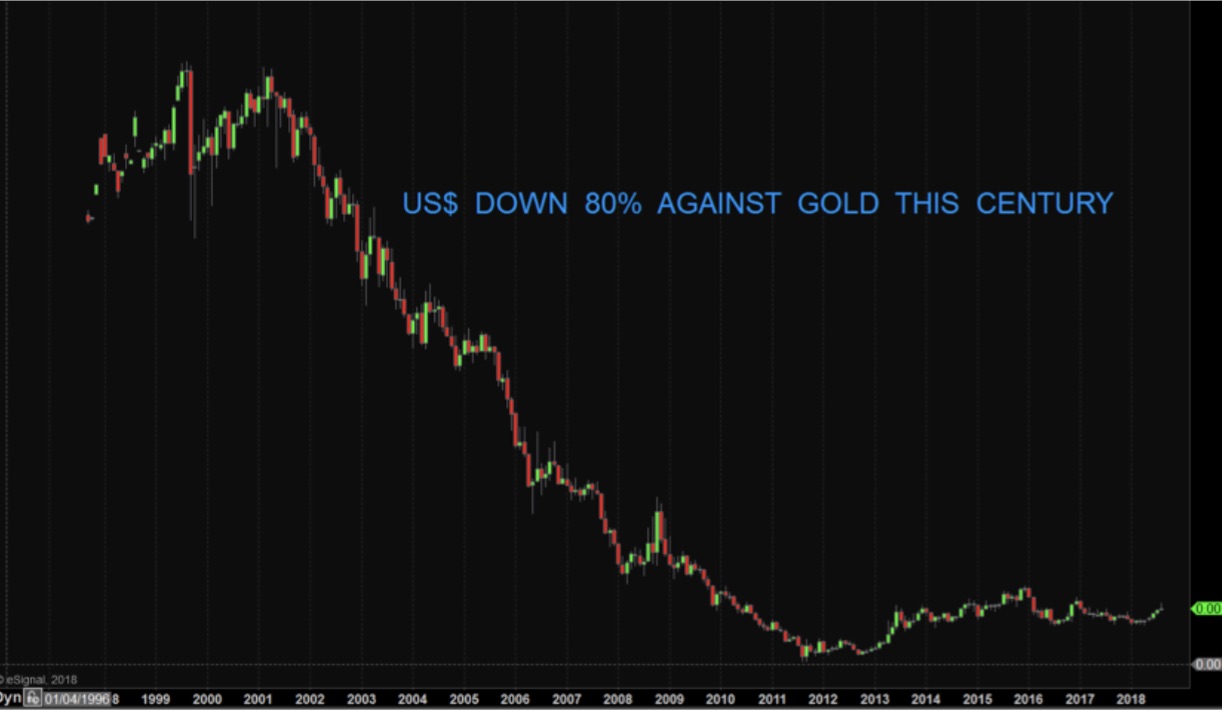 “Time to get rid of the US dollar” said the Russian Deputy Foreign Minister recently. He added “Thank god this is happening …. We will speed up this work.”

Russia, China, Turkey, Iran and many more countries, are also determined to trade in their own currencies in gold. This will precipitate the fall of the dollar. But the major reason why the dollar will soon conclude its 100 year move to ZERO is the dire state of the US economy as mentioned above.

Entering The Dark Years
As we end a long and totally engineered bull market in the world economy, we will be entering the Dark Years that I wrote about a few years ago. Hard to imagine that the powers that be have managed to fool the world for a decade. But this next time, their panic actions, using the same medicine of massive money printing and lower interest rates, won’t work. The world will recognize that printed money is not even worth the paper it is written on, or that electronic entries called money can disappear as quickly as they are created.

As the West has overtly and covertly reduced its gold holdings, the East is continuing to add as much as they can at these bargain prices. Most central banks have either sold or leased a major part of their gold to the market. This gold is then bought by China, India or Russia, through the bullion banks. These Eastern countries obviously take physical delivery rather than leaving the gold in London or New York. When you own gold, you must have direct control. 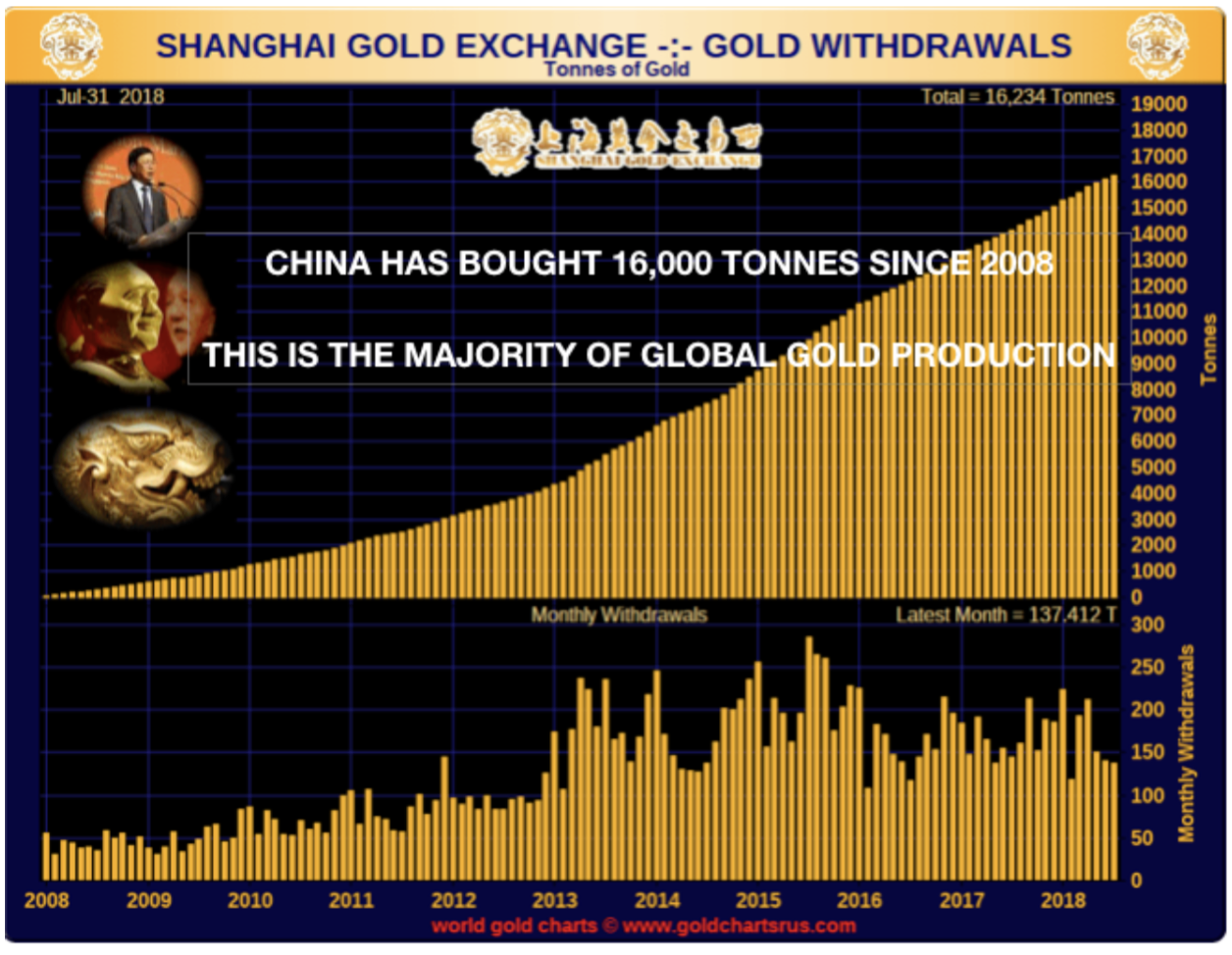 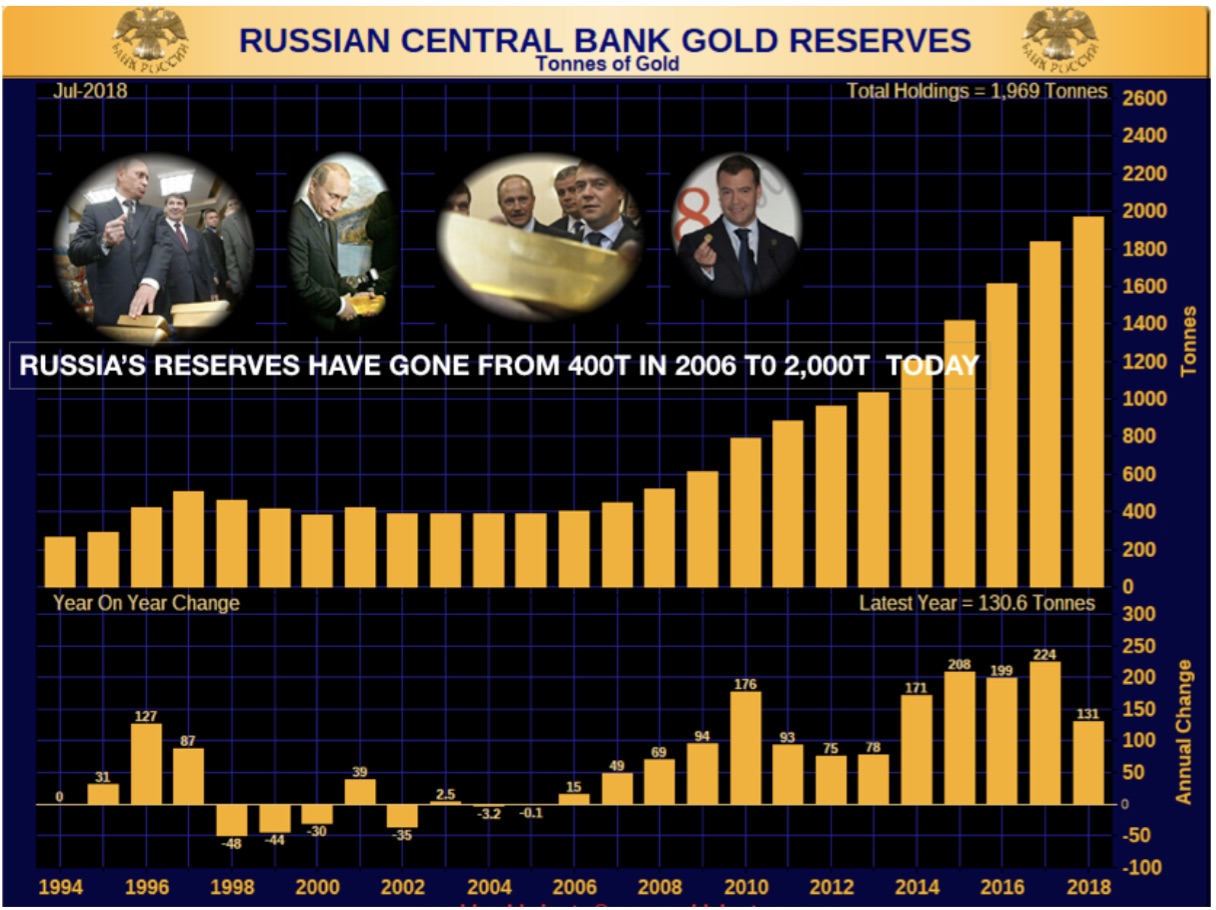 The chart below shows how central banks and bullion banks are losing their gold. The Swiss refiners produce around 70% of the gold bars in the world. As the chart shows, they import their gold from a number of different sources. Surprisingly, to many, in July 2018, by far the biggest purchase was from the UK totaling 67 tonnes. The UK is not a gold producing country. Instead these are 400oz bars from Western central banks that have been bought by China, India or Russia. The bars are sent to the Swiss refines to be broken down to 1kg bars and then shipped on to the Eastern buyers. The Swiss import statistics often show that the UK is a major exporter. This is very clear evidence that Central Banks are continuously reducing their holdings. 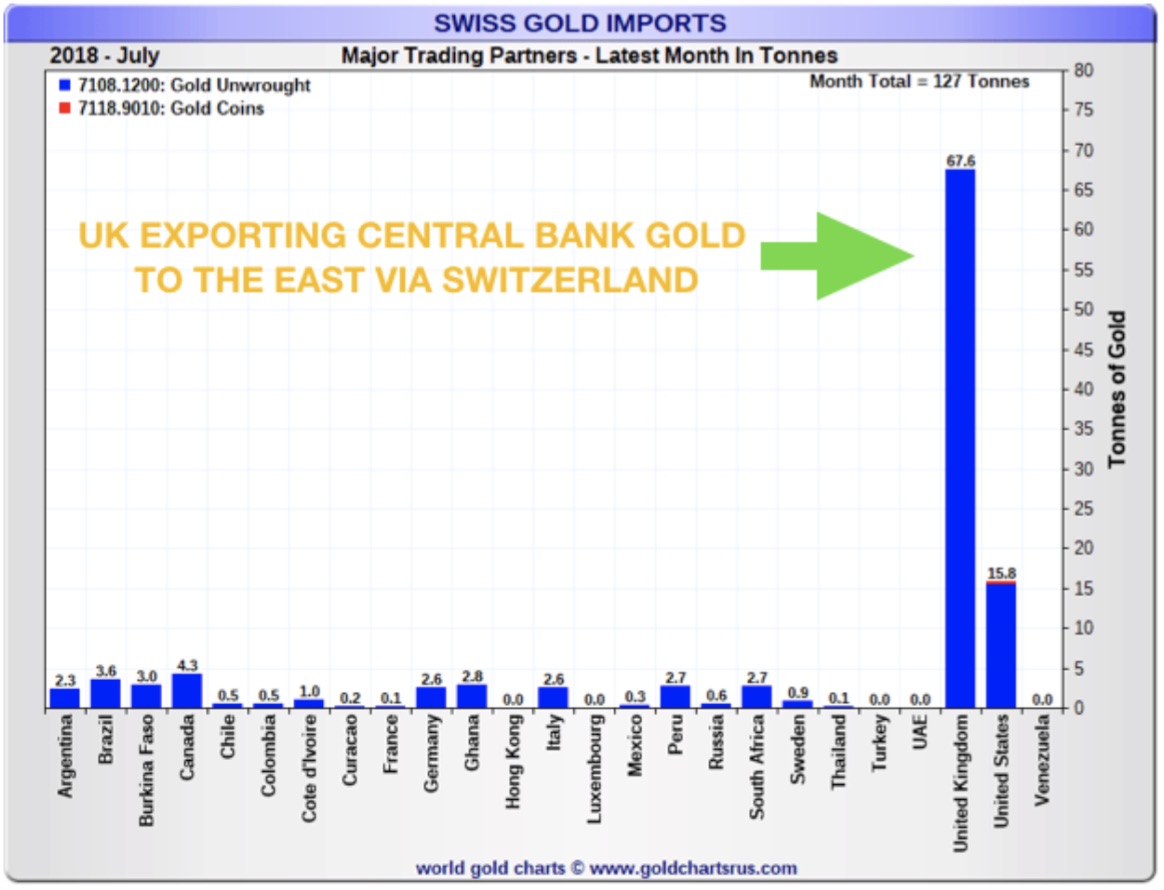 Thus, it is likely that the real holdings of USA (8k Tonnes) Germany (3.3k T) or the IMF (2.8k T) are less than half to their declared holdings. And whatever they have leased to the market, they will never get back. All they have is an IOU for gold from a bullion bank. That IOU can never be honored since there will be no physical gold available. And if it was available, it would be a price that is 10, 20 or 100 times the current price.

In the next phase of the gold and silver markets, the LBMA banks and Comex will blow up and be unable to honor their paper commitments, which are at least 500 times the available physical gold.

These prices might seem like fantasy, but what we must understand is that when the fake and manipulated gold and silver paper markets blow up, there will be no price or no gold or silver offered by the dealers since they don’t have any physical metals to settle their commitments. Regardless of what price gold and silver will reach, the current prices of $1,200 and $14.80 are totally ridiculous.

The Biggest Secret In The World
This is the biggest secret in the world that virtually nobody understands. Just like a Venezuelan would have saved his and his family’s life, so will people who buy gold today in the West. Still. nobody is buying. And even the ones who are aware are waiting to see if gold and silver will go lower.

Take my word for it, to wait for the precious metals to go lower will be the most costly mistake that anyone can make. Because when prices turn up, most people will miss the boat. And they will be totally without the protection they so badly need. Physical gold and silver at current prices is the cheapest life insurance premium that anyone can ever pay.

Remember, precious metals is not an investment, it is the ultimate form of wealth preservation. But this time gold and silver will not just be wealth preservation, it could save your life, just as it would have done for the poor Venezuelans. For those who would like to read more of Egon von Greyerz’s fantastic articles CLICK HERE.

ALSO JUST RELEASED: Was This The Real Reason For Friday’s Huge Move In The Metals? CLICK HERE TO READ