With continued uncertainty around the globe, today the man who has become legendary for his predictions on QE, historic moves in currencies, spoke with King World News about the Panama & Paradise papers, global meltdown and the road to $80,000 gold.

Panama & Paradise Papers
November 12 (King World News) – Egon von Greyerz:  “What will happen between now and 2025?  Nobody knows of course, but later in this article I will give a little peek into the next 4-8 years.

The concentration of wealth in the world has now reached dangerous proportions. The three richest people in the world have a greater wealth than the bottom 50%… 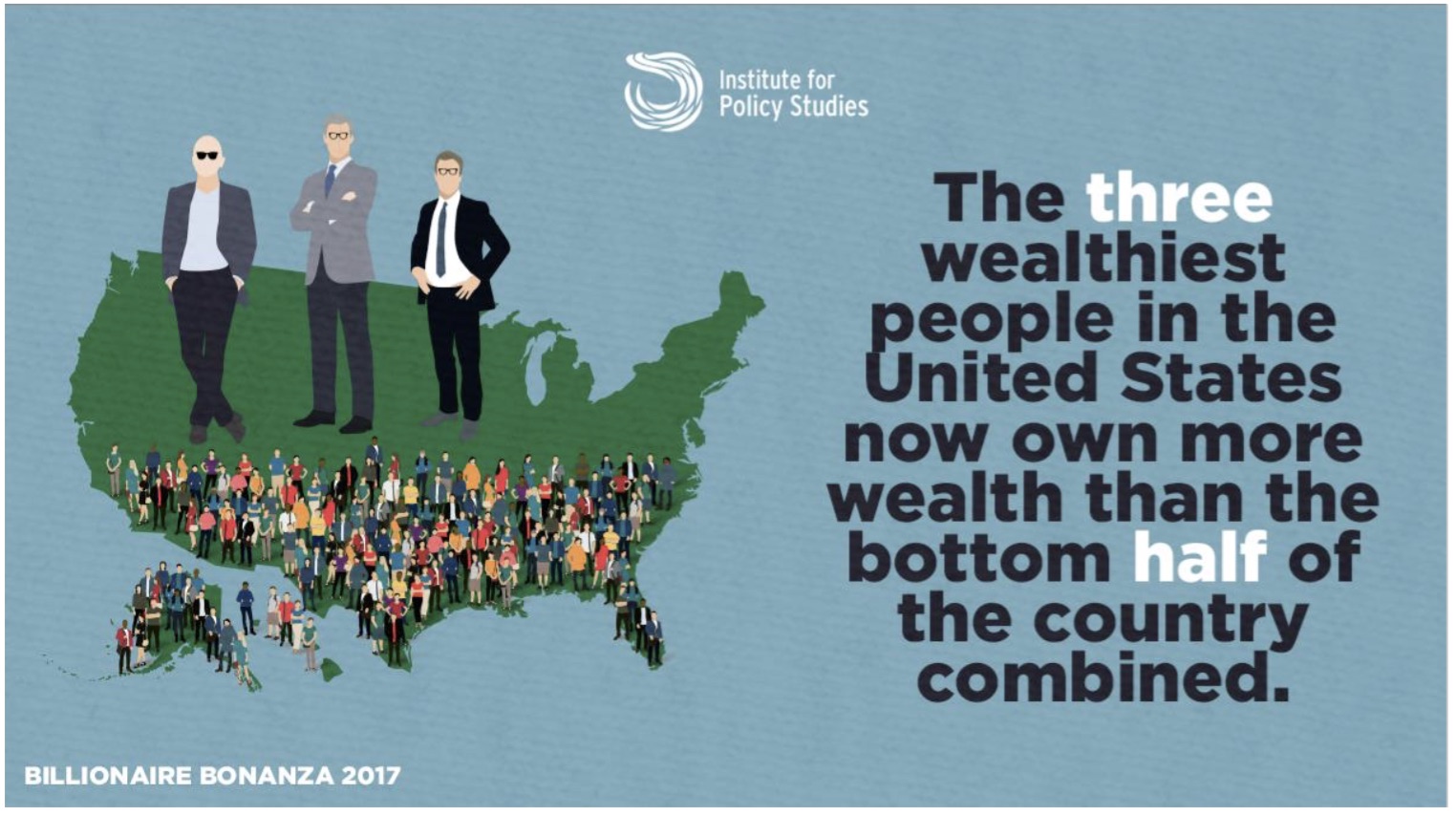 The interesting point is not just that the rich are getting richer and the poor poorer. More interesting is to understand: How did we get there and what will be the consequences? 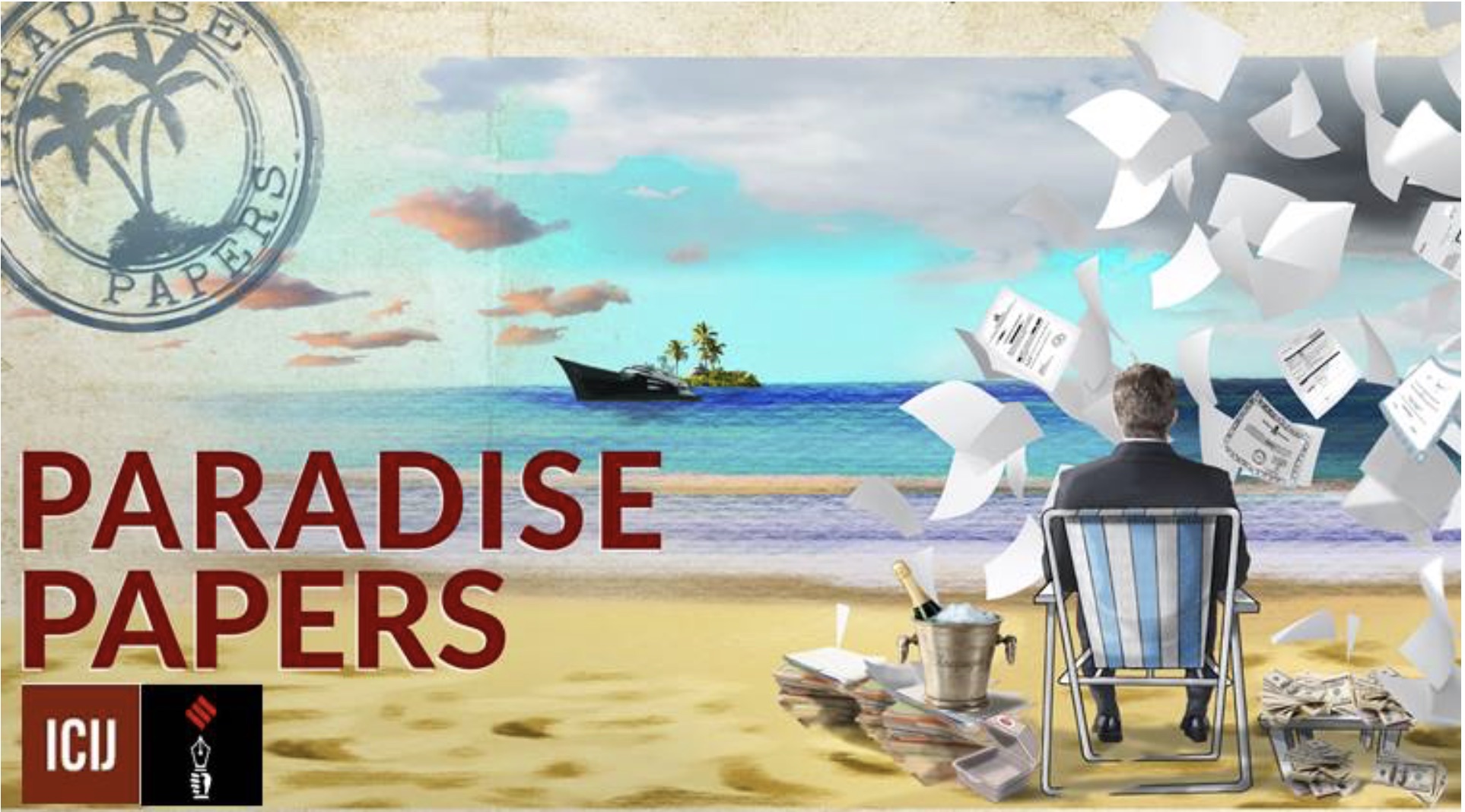 As the socialist dominated media dig into the Panama Papers and now recently the Paradise Papers to attack the rich and tell governments to tackle the unacceptable face of capitalism, nobody understands the real reasons for this enormous concentration of wealth. Sadly no journalist does any serious analysis of any issue, whether it is fake economic figures or the state of the world economy. Instead, all news is accepted as the truth, when in fact a lot of news is fake or propaganda.

Let me first put the facts right. It is not capitalism in its traditional sense which has created this enormous concentration. One definition of capitalism is:

“An economic and political system in which a country’s trade and industry are controlled by private owners for profit, rather than by the state.”

The “controlled by private owners” part of the definition fits our current Western system. But what is missing is that the current economic system could not function without complete state sponsorship and interference. This is the clever construction that a group of top bankers devised on Jekyll Island in the US, in November 1910. This was the meeting that led to the creation of the Fed in 1913. The Central Bank of the US was set up as a private bank, and thus controlled by private bankers for their own benefit.

The bankers devised what one of their forefathers, Mayer Amstel Rothschild, had preached:

From the bankers’ point of view, this was a brilliant idea. They now had total control of the money without having to risk more than a smaller part of their own capital. And the government found this system perfect for buying the people’s votes. By issuing more and more debt and allowing banks to leverage their balance sheets, the US saw its standard of living increase significantly. More cars, televisions, holidays, iPhones etc. Little did the people realize that their improved standards were all at the expense of massive increases in government debt and personal debt.

In 1913 US debt to GDP was 150%. Today, including unfunded liabilities, the figure becomes almost 1,000%. This is the burden that ordinary Americans are responsible for, a burden that will break the US people and the US economy as well as the dollar.

While ordinary people have been landed with liabilities that they can never repay, the bankers and the 1% elite have profitably (ab)used the leverage that the debt expansion has created and thus amassed massive fortunes.

That is why we are seeing this enormous inequality in wealth. Ordinary people have not yet realized that they are liable for this debt. They will of course never repay it, nor will anyone else. Governments will try to solve the problem by printing even more money, thus exacerbating the problem. Eventually this will lead to high inflation turning to hyperinflation, with interest rates going to at least 15-20% and probably higher. At that point central banks have lost total control of their interest rate manipulation.

The world will then discover that the money printing will have no effect at that point, as manufactured money can never create wealth. 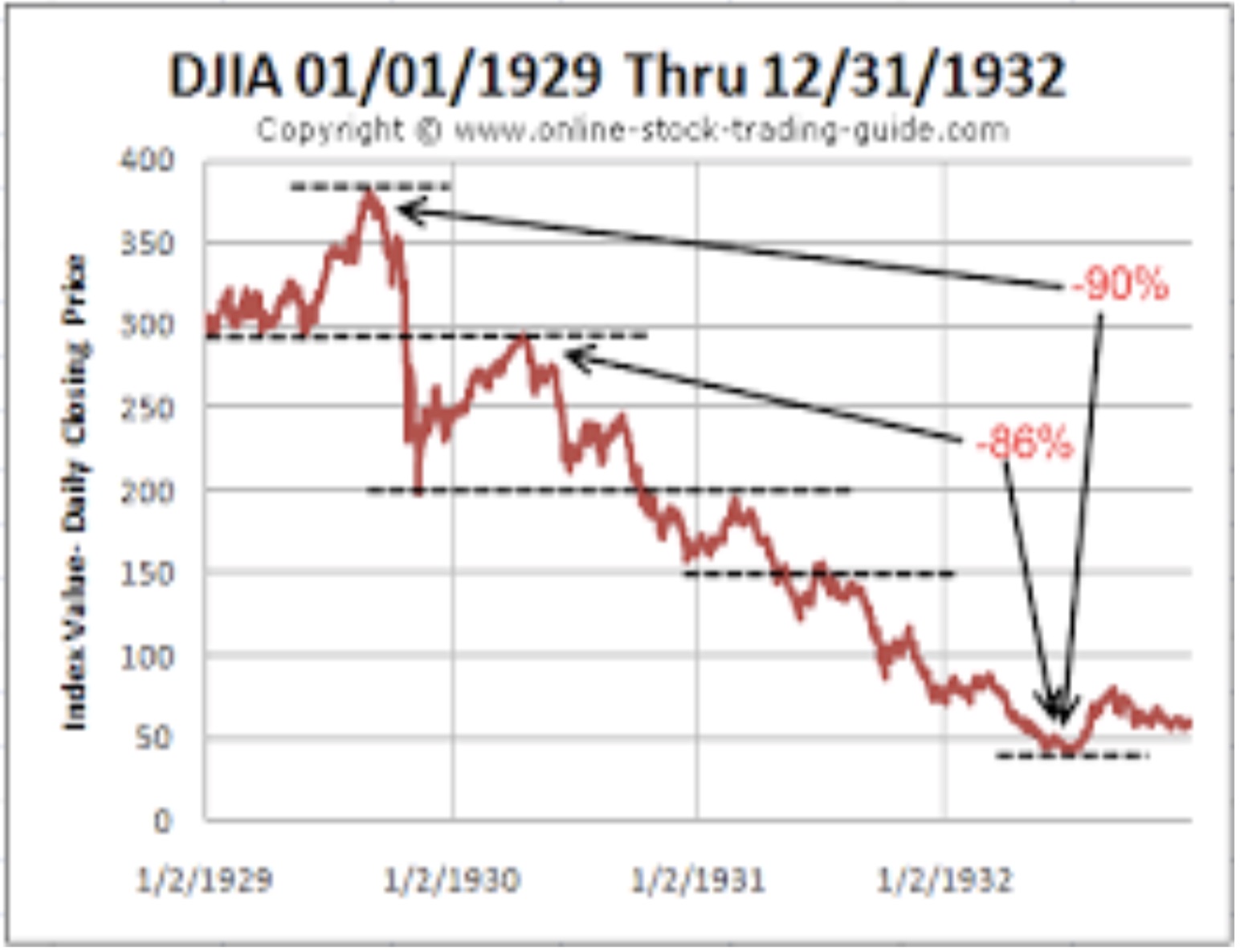 Global Chaos And The Greatest Wealth Transfer
The consequences of the implosion of debt and assets will lead to the biggest transfer of wealth in history. As debt implodes, so will all the bubble assets. Stocks, bonds and property will decline between 80% and 100%. This is difficult for most people to accept but just remember that the Dow declined by 90% between 1929 and 1932. And 2000 to 2002, the Nasdaq declined by 80%.

Neither of these examples involved a global debt situation or asset bubbles like the ones we are experiencing now. This time the world must unwind $2 quadrillion of debt, unfunded liabilities and derivatives. That is 29X the global GDP of $70 trillion, and therefore of a magnitude that will lead to a collapse of the financial system.

Governments as well as members of the media are discussing taxing the wealthy to create more equality. Since the wealthy, especially in the US, control the system, higher taxation will be difficult to achieve. In Europe the socialists will most likely increase taxes for the wealthy. But higher taxes are not going to be required to solve the problem. The coming asset implosion will tax the rich much more than any politician could ever achieve. On average the wealthy are likely to lose up to 90% of their wealth. At the same time the debt, either personal or public, that the average person is responsible for will also implode. Thus the wealthy could lose 90% or more of their wealth and the poor will lose their debt.

This will be the biggest wealth transfer in history, but it won’t happen without strife. There will be social unrest and possible civil war before all this is over. This was not the case during the 1930s depression, except in Germany. Today, population in the US or most European countries is not as homogenous as it was in the 1930s. The great number of immigrants in many Western countries will lead to much greater conflict and unrest than in the 1930s.

Except for the average person, who is likely to become debt free after the implosion of the financial system, the major beneficiaries will be the investors who have no debt and hold hard assets such as agricultural land, commodity investments, including precious metals and also certain food sector investments which will benefit from food shortages and food price inflation.

If we look at levels that various markets could reach in coming years, they might seem totally unrealistic in today’s euphoric and exponential phase. The Dow is today around 23,400. We are now in a melt-up phase that could see markets continue to go up substantially before they top. But the risk is very high, and any surprise will be to the downside.

Once the top is in we are likely to see a long and sustained secular bear market lasting many years.  In the early 1980s, the Dow broke out from the 800 to 1,000 level where it had been for over 10 years. This is such a major long term support level that it seems likely to be reached in coming years. That is a 95% fall from here which is just slightly more than the fall in the 1930s. 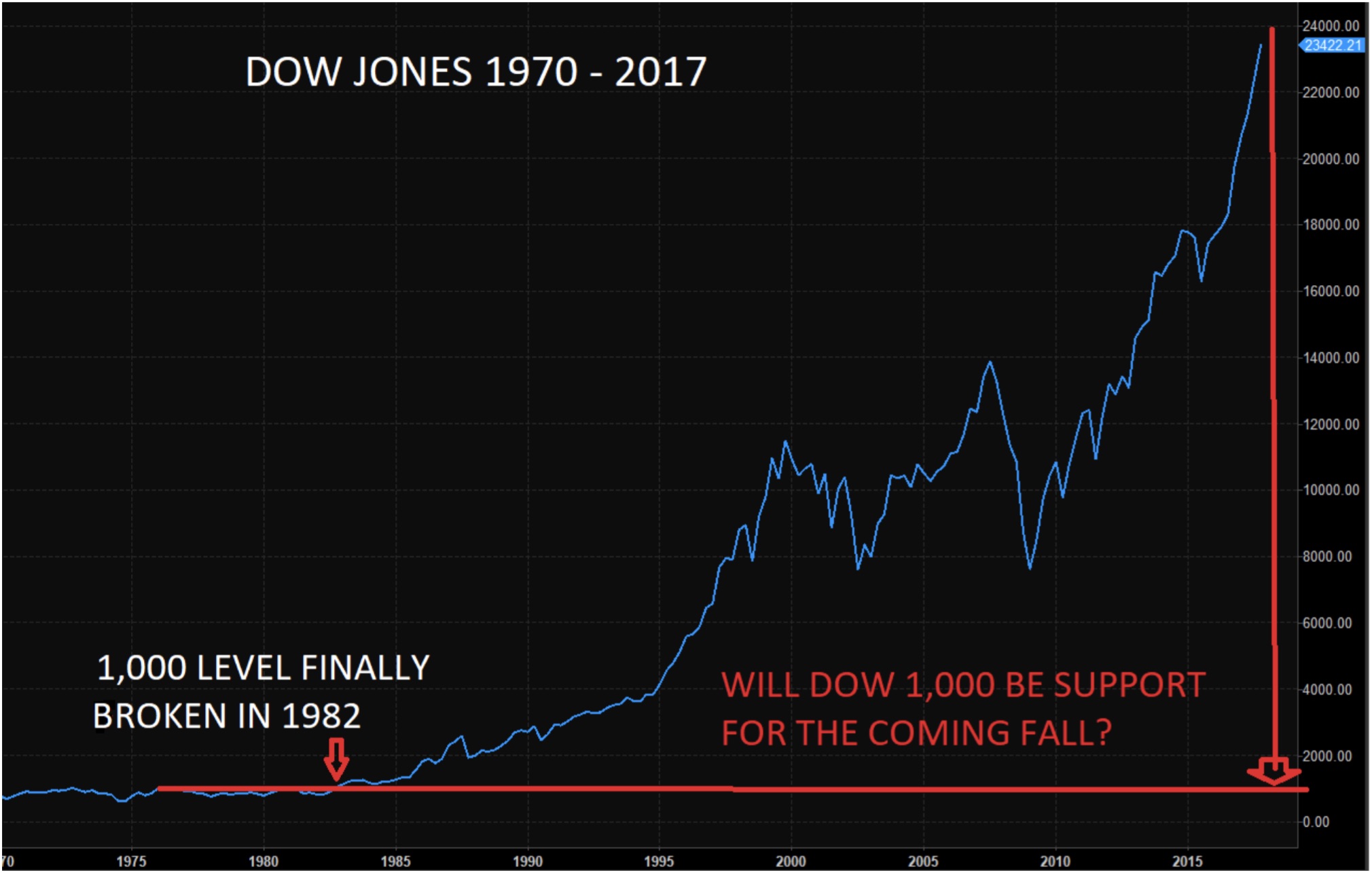 Interest rates have come from the high teens in the 1970s and early 1980s, in the UK and US. It is probable that we will see those levels again and much higher if sovereign and private borrowers default which is highly likely. Unlimited money printing, which will certainly take place, is also a form of default since it makes the currency worthless.

Currencies will soon start their final move to the bottom. It is not easy to forecast which country’s currency will win this race, but it could very well be the dollar since it is the most overvalued of all currencies. But it serves no purpose to measure one fiat (paper) currency against another. They are all likely to reach their intrinsic value of zero.

The Road To $80,000 Gold
The current era’s currency debasement started in 1913 and is now in its final stage. Measured in gold, the dollar has lost 98.3% since 1913. Let’s say that the dollar now starts an inverted exponential move of the same magnitude as the move in the last 114 years. As I explained in my KWN piece discussing exponential moves, these are final moves and they normally happen very fast. Another 98.3% move down in the dollar would mean $80,000 for one ounce of gold. Part of that price increase is likely to be inflation although I believe that gold should reach at least $10,000 – $15,000 in today’s money. $15,000 would be a 91% fall from here of the dollar. With hyperinflation we can add many zeros. 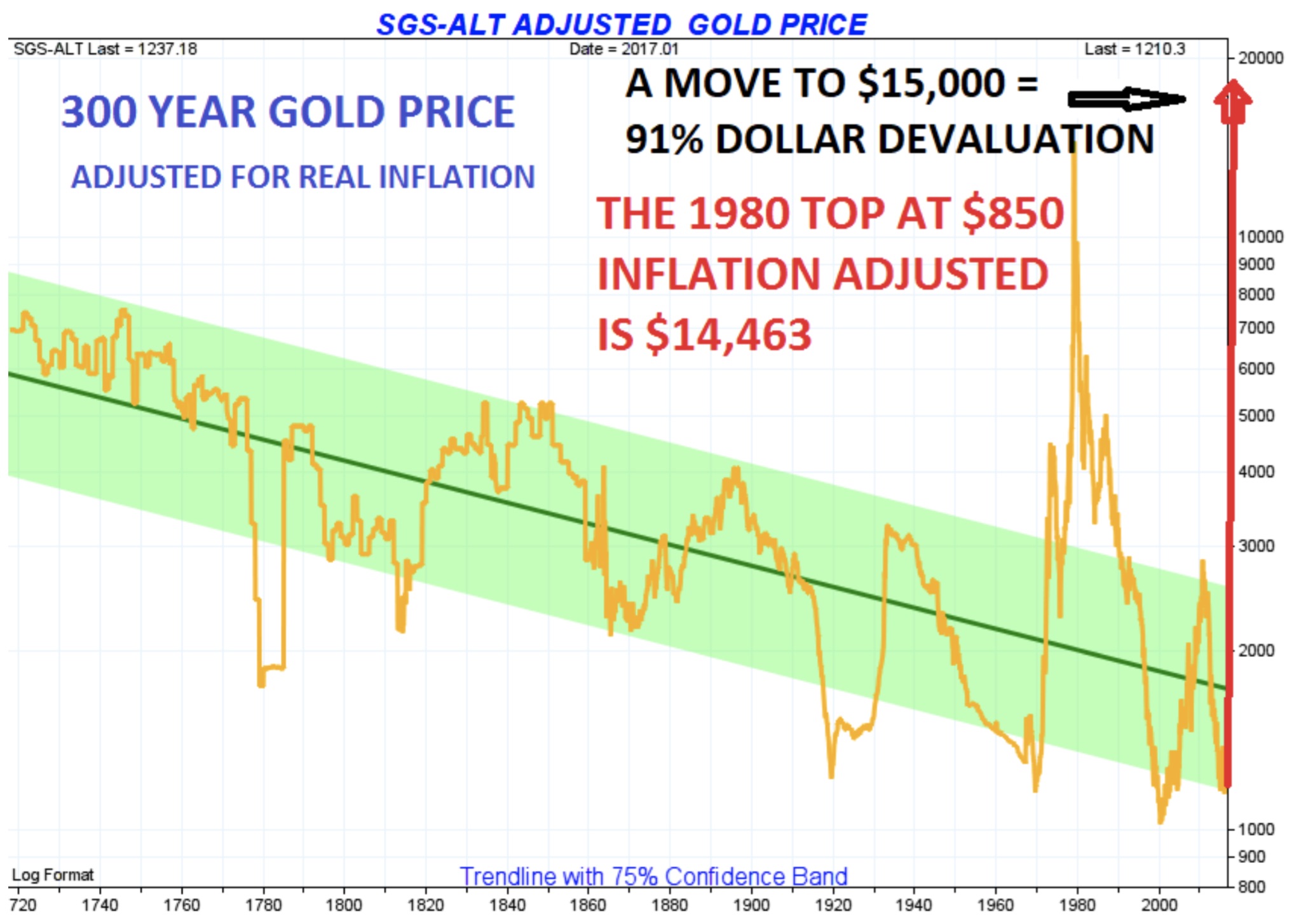 Back in early 2002 when our company invested heavily into physical gold for our investors and ourselves, gold was $300. We have obviously held on to the positions. We certainly have been right on the direction of the move, but did expect that the final move up would happen quicker than the almost 16 years up to now. Nevertheless, we are convinced that this move is still to come, and it is likely to be exponential as I explained in my KWN piece.

How long this will take is obviously impossible to forecast. There are a number of factors which indicate that these major moves and changes will have happened by 2025. Cycles also point to gold having a major move into 2021. So the moves could happen within 4 years but it could take as long as 8. Forecasting exact time and price is a mug’s (British for fool’s) game, and therefore likely to be wrong. However, what is indisputable is that global risk is currently greater than any time in history. What is also certain is also that gold is the best insurance against these risks, just as it has been for thousands of years.”