As the world edges closer to the next crisis, today the man who has become legendary for his predictions on QE and historic moves in currencies spoke with King World News about his $1 million wager and the Gold Maginot Line.

$1 Million Wager And The Gold Maginot Line
June 9 (King World News) – Egon von Greyerz:  “I just won a $1 million wager on gold! At the beginning of the week, I was challenged with a wager on the gold price. The individual, who called me a “gold pumper”, wanted to bet $1 million on the gold price going below $1,000 before it reached the Maginot Line at $1,350. Since the gold price was $1,325 when I received the challenge, the odds looked pretty good to me. Gold only needed to go up $25 for me to win $1 million but down $325 for the challenger to cash in. Thus, a no-brainer really, especially since I was totally convinced that gold would break the Maginot Line…

I suggested that we both place $1 million in a vault in Zurich, held in escrow by a Swiss notary and I also set out the detailed rules for the wager. The challenger came back and wanted to deposit $1million with his lawyer in the US instead. Obviously not acceptable since being Swiss, I would neither trust the US legal system, nor the other party’s lawyer or the US dollar. 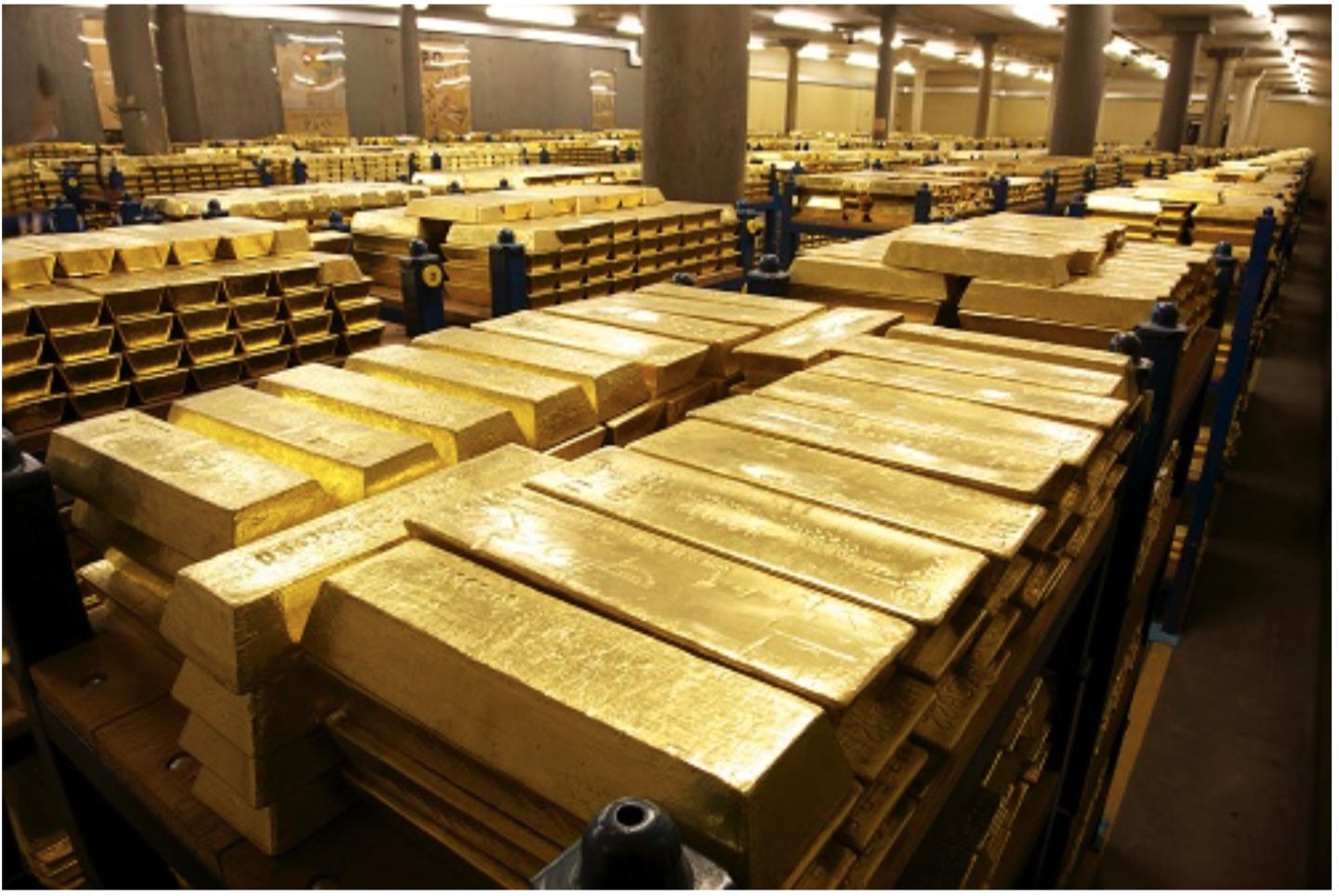 To make a long story short, the challenger started to procrastinate and then as the price was rising, the challenger pulled out because Paul Tudor Jones was bullish on gold. So not much conviction there in his big bet! And then last Friday, gold broke above the $1,350 Maginot Line and went to $1,358. So I didn’t actually win $1 million in fiat money or gold, but morally I did of course and that felt just as good.

The Ignorance Of People Who Hate Gold
People who hate gold obviously don’t understand its purpose nor the history of gold as the only money that has survived throughout the ages. Also, I have found that many gold haters have lost money speculating on gold mining stocks. The gold haters always use the same fallacious arguments, like you can’t eat gold. True, it is slightly harder to digest than paper money, which you can’t eat either. Gold haters, including lazy and tendentious journalists, also choose a price level that suits their argument. They take the gold price in 1980 at $850 and then argue what a poor investment is was as gold went to $250 in 1999. The fact that gold went up 24x from $35 in 1971 to $850 in 1980 is totally ignored by the gold ignoramus. And then they pick the top in 2011 at $1,920 as an example of what a bad investment gold is.

It is of course true that if you buy at the top and get out at the bottom, you will lose money. Also, investors who buy high and sell low will quickly run out of money.

What most investors fail to understand is that governments are their best friend when it comes to gold because governments always underwrite the gold price by constantly printing money and expanding credit. That is why all currencies have fallen 97-99% against gold in the last 100 years. Thus, there is only 1-3% left for paper money to lose all their value. 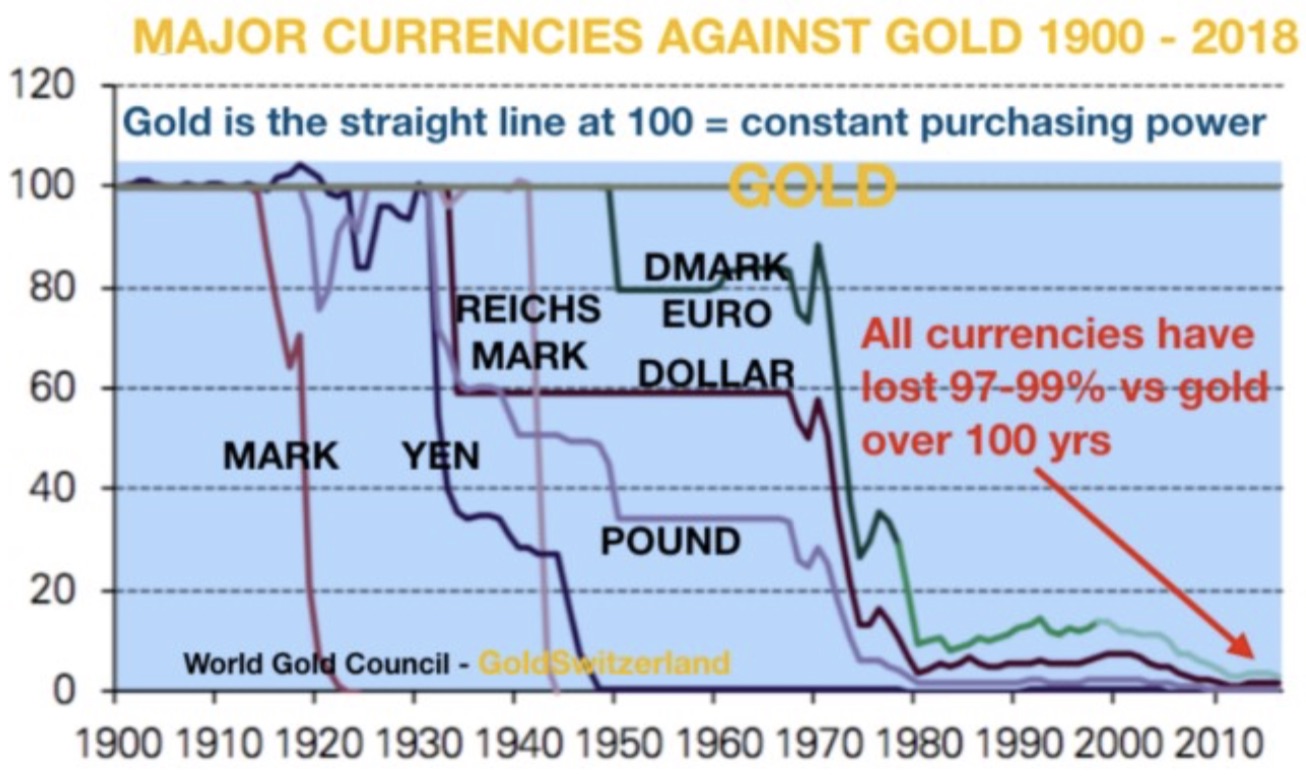 And we must remember that today the next move down involves a 100% loss in value of currencies. This is what the world can expect in the next 5-7 years as the financial system fails and governments, in a desperate attempt to save the system, print unlimited amounts of money. Remember that 2006-9 was a rehearsal. Nothing was solved at that time. The can was just temporarily kicked down the road with $10s of trillions of printed money, loans and guarantees. Since 2006, global debt has doubled from $125 trillion to $250 trillion.

Most governments can hardly service their debt even with interest rates around the world negative to just over 2%. Deficits and debts are continuing to grow globally. Only in the US, eight months into the current fiscal year, debt has grown by $1 trillion to $22.4t. On average US debt has doubled every 8 years since Reagan became President. There is every reason to believe that this trend will continue. This means that by the end of 2024, the US will have a debt of $40 trillion. That might seem unrealistic today but with rising deficits and a new financial crisis in the next 5 years, $40t debt seems quite feasible. 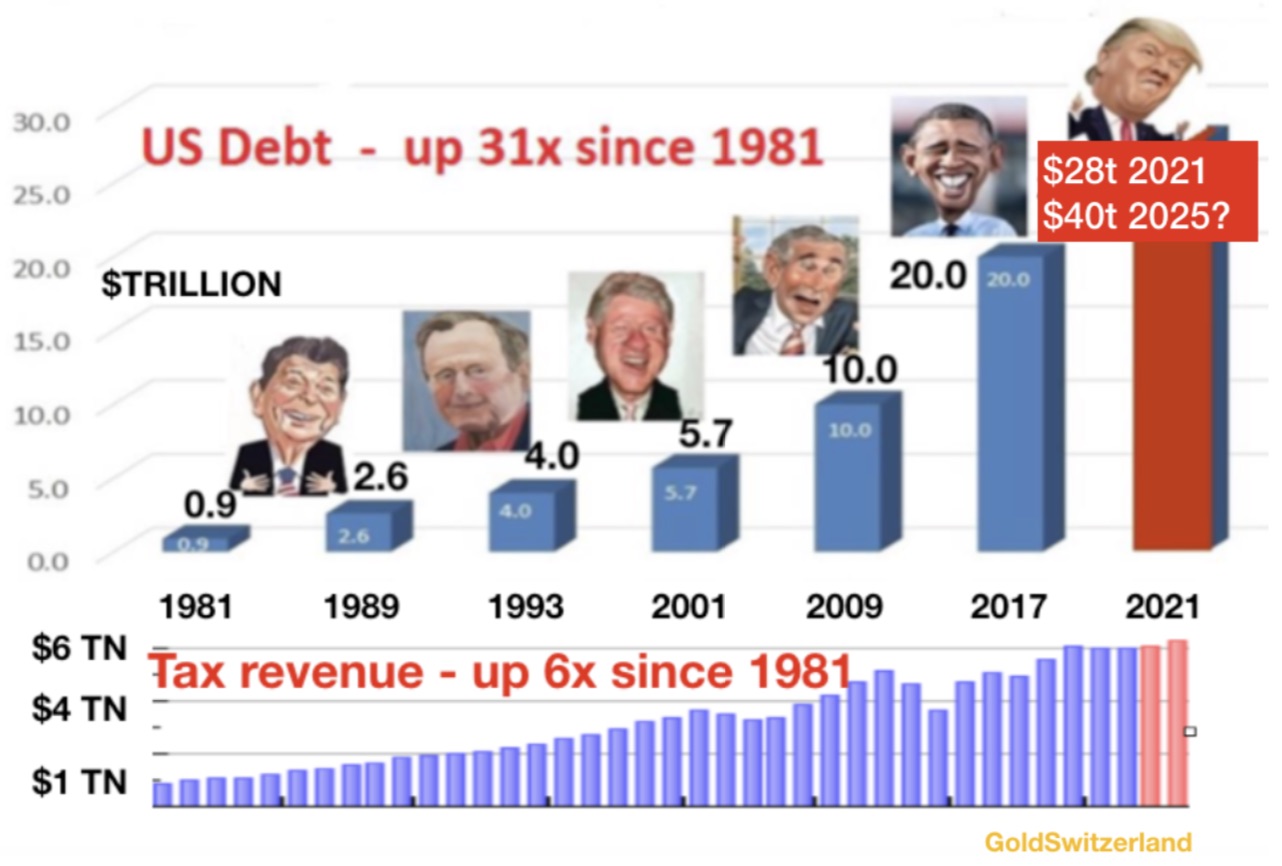 With a crash in the bond market and high inflation, or hyperinflation, interest rates are likely to reach the teens by then just like in the late 1970s and early 1980s. By that time the Fed will have lost control of rates as market pressure will prevail with panic in bond markets globally. With US debt at $40t in 2025 and interest rates at say 15%, total interest cost would be $6t. Tax revenues are unlikely to rise from current levels and will thus be maximum $3.5t. Thus, just interest costs will be $2.5t above tax revenues. And so the vicious circle begins with falling tax revenues and rising costs, more deficits, corporate and bank defaults, debt levels exploding and interest rates surging. With risk levels at extremes, any lender would demand extremely high returns.

The Perfect Scenario For Hyperinflation
The above course of events is the perfect scenario for hyperinflation, which is virtually guaranteed. Paper money will reach its intrinsic value of zero and gold will go up substantially in real terms and exponentially in inflationary terms. The above scenario is inevitable and it is only a question of how long it takes to develop. As usual, the world at large will believe that governments and central banks will again come to the rescue. Very few people understand that with $250t in global debt, plus another $250t in unfunded liabilities and $1.5 quadrillion in derivatives, the world is staring at total debts and liabilities of over $2 quadrillion, which will all default.

Printing worthless money or issuing crypto tokens will not make one iota of difference. An insoluble debt problem cannot be solved with more debt. If you add worthless printed money to a debt which is also worthless, you have the perfect concoction for a global disaster of colossal proportions.

With the above scenario guaranteed to happen, anyone who thinks that the Gold Maginot Line at $1,350 will hold will need to think again. Whether gold goes through that level in the next week or so, or if it takes longer, it will definitely happen. Remember that gold in most other currencies is already past this level. It is only because the dollar is temporarily strong that gold in dollars has held up . But the dollar will soon start its journey to zero.

The Real Reason We Created GoldSwitzerland
I hear people who don’t understand gold sometimes saying that our views on the economy are linked to the fact that we assist people to preserve wealth in the form of physical gold and silver. What most people don’t know is that when we at GoldSwitzerland created the safest system for acquiring and storing precious metals outside the banking system, it was for the purpose of our own private use and for a few wealthy investors that we advised. Several years later we opened it up to outside investors due to demand.

Thus, what we created was not set up for commercial reasons but to protect our own wealth. That later developed into a passion to assist other investors to preserve wealth in the form of physical precious metals. What makes our activities especially rewarding is that we deal with people who are not masters of the universe but humble. They are interesting, free-thinking individuals who can see what is happening in the world and understand that it is essential to protect their assets by applying stringent wealth preservation criteria. We are very privileged to meet these people and we know that our collective thinking and planning with them will be critical in withstanding the economic and personal pressures in coming years…For those who would like to read more of Egon von Greyerz’s fantastic articles CLICK HERE.

***Also just released: James Turk On Friday’s Intense Trading As The War In The Gold Market Heats Up CLICK HERE TO READ.