As the world edges closer to the next crisis, today the man who has become legendary for his predictions on QE and historic moves in currencies and metals told King World News that the world is now facing the gravest crisis in modern history.

This Is It!
March 1 (King World News) – Egon von Greyerz:  This is it! The party is over. The world is now facing the gravest economic and social downturn in Modern Times (18th century). We are now entering a period of global crisis that will change the world for a very long time to come. This should come as no surprise to the people who have studied history and also read my articles for the last few years. Many others have also warned, but since mainstream media never talks about the excesses in the world or the risks, 99.9% of people are totally unprepared for what is coming next.

THE 4,000 POINT FALL IN THE DOW IS THE MERE BEGINNING
The 14% fall in the Dow last week and similar plunge in many markets around the world is only the mere beginning. I warned investors about this stock collapse in recent weeks. In my article on Jan 26, I wrote “Stock Collapse and Gold Surge Imminent” and again on Feb 9, I said “The Crisis will Propel Gold and Sink Stocks”. We have, last week, seen the beginning of the stock collapse with a 4,000 point fall in the Dow. The gold surge is still to come. We are likely to see further strong falls in stocks next week again, before a small correction.

Fundamentally, it has been clear for quite some time that stocks and the world economy are at the end of a secular bull market. The falls in the last week have confirmed that the party is over and that we are now starting a secular bear market that will affect the world for years and maybe decades.

THE DOW UP 40X IN 40 YEARS
The era of printed money and unlimited credit driving asset prices to ever dizzier heights is now over. If we take the Dow as one example, it has gone up 40x in the last 40 years. The average annual return has been 11.53% including reinvested dividends. This means that an investor in the Dow has doubled his money every 6 years, on average, over a 40 year period! So $25,000 invested in 1980 would be $2 million today.

The coming downturn will not take 40 years. When bubbles burst, everything unravels very quickly. It could take 3-7 years for the Dow to come down 90% or more. In 1929-32 it took less than 3 years for the Dow to fall 90%. And the situation today is much more serious when it comes to overvaluations, debts, deficits etc.

STOCKS BONDS AND PROPERTY DOWN >90%
So the coming economic downturn will see all bubble assets like stocks, bonds and property decline at least 90% in real terms. But although markets might bottom within the next 5 years, the world economy might go along the bottom for a very long time, possibly decades. Historians will let the world know afterwards the extent of the coming downturn. 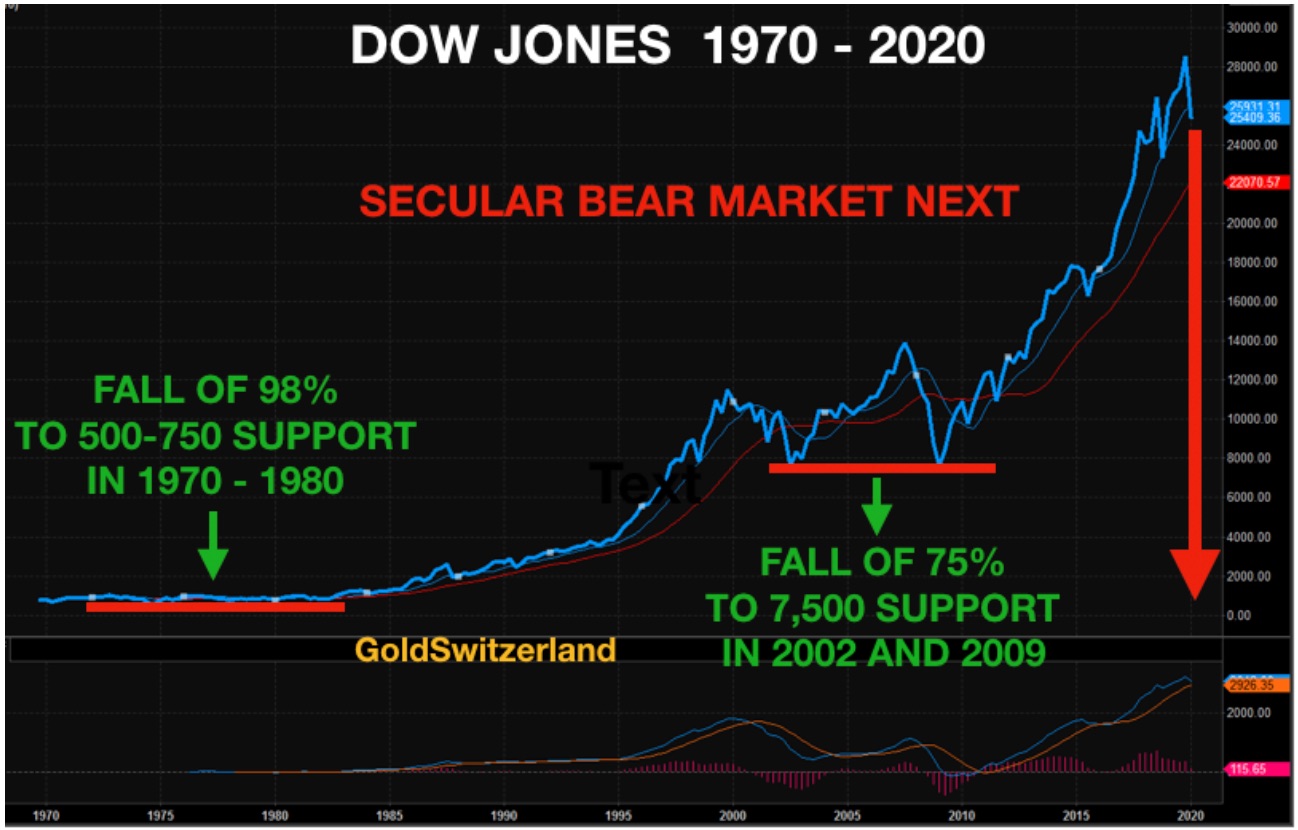 CORONAVIRUS IS NOT THE CAUSE BUT THE CATALYST
Investors are obviously linking the stock market crashes to the Coronavirus but we must remember that the virus is not the cause of the falls but only the catalyst. Stocks around the world have been overvalued on many criteria for quite some time.

The majority of people today are not worried about stocks but instead about the Coronavirus. Most of us don’t understand it since authorities around the world suppress the truth when it comes to numbers of infected and fatalities. China seems never to have told the truth about the virus and many countries have followed suit.

The pandemic is spreading exponentially and it can take 3-4 weeks before it breaks out from the time you are infected. In that time every infected person can meet many hundreds of people. In Italy for example, there were no cases a few days ago and it jumped to 150 in a couple of days and now 900 are reported to have caught the disease.

In Switzerland only 12 cases are reported but that will multiply quickly. All public events in Switzerland with more than 1,000 people have been banned. The Geneva International Motor Show due to start on Monday has been cancelled…

I am certainly no expert but it seems to me that it will be impossible to stop the spread of Coronavirus. Closing all factories, offices, schools, shops, railways, cinemas etc will paralyse the countries and the world economy. I would not be surprised if in the end governments tell people to continue as normal rather than to quarantine everyone. If the mortality rate is on average not more than 2%, this is a calculated risk that the authorities are likely to take.

To totally close down countries and production, leading to shortages of food and medicine, will probably kill more people over time than the virus itself.

FOR INVESTORS BAD NEWS IS GOOD NEWS – UNTIL NOW
So whilst ordinary people around the world are concerned with the Coronavirus, investors are focusing on crashing stock markets. Most people are blissfully unaware of the Dow’s  biggest point fall ever last week of 4,000 points (14%) or similar falls in other world markets.

Investors love bad news like lower earnings or poor economic figures since this leads to more economic stimulus.  So until a week ago, markets loved the fact that central banks around the world have embarked on what will be the biggest money printing exercise in history. Investors are not concerned about  the reasons for the massive liquidity injections which are due to problems in the world’s financial system. Instead, more money printing means more credit and more cash availability for stock market investors. So bad news for the economy has created ever higher stocks reaching the sky.

Clearly, central banks will soon accelerate money printing and the ones that can, like the US, will lower rates. This might create a bounce in stocks down the line, sucking everyone in. But this time money printing will only have a very brief effect. Because any bounce will be short lived and the subsequent big fall will be devastating. So this is definitely not the time to buy the dips. For anyone in the stock market, much better to get out on the bounces.

GOLD CORRECTION IS TEMPORARY
Precious metal investors are nervous because we are seeing a small setback. This is similar to 2008 when precious metals and the miners initially sold off strongly before they continued the rally. It is likely that the metals will correct further before they resume their uptrend. But the correction will be much smaller than in 2008. There should be no doubt that gold and silver will reflect the coming problems in the world economy and especially  the guaranteed currency debasement that will take place due to unlimited money printing. 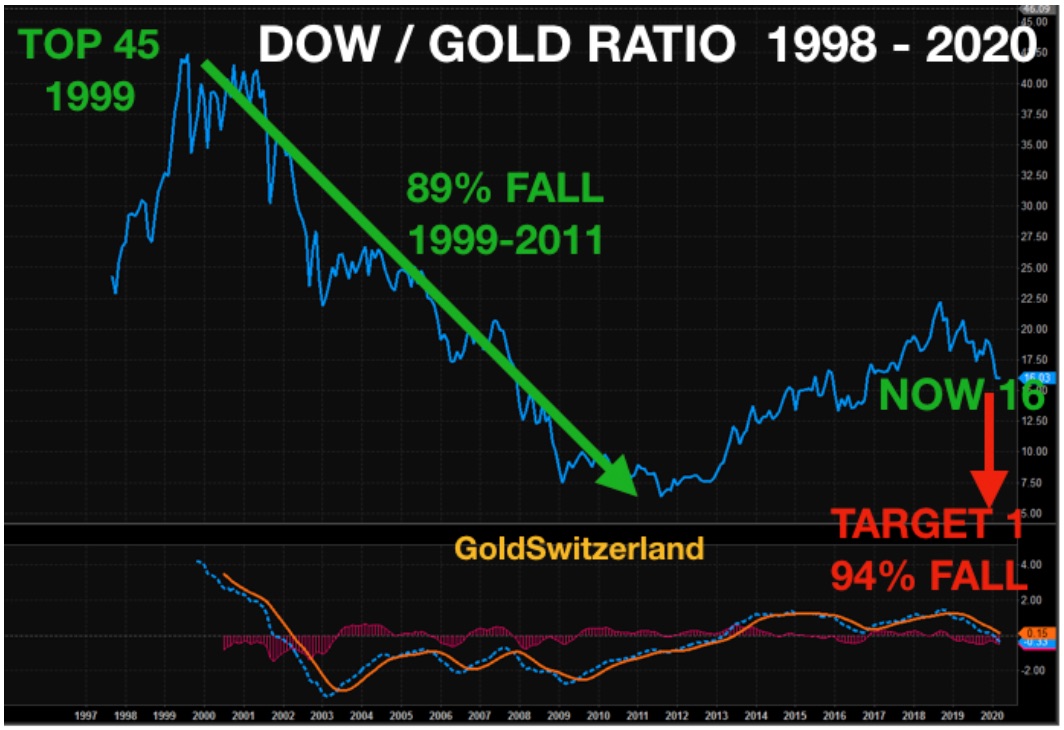 But even if the ratio fell to 1 only, it would involve stocks losing 94% against gold.

So quite a simple decision. Get out of all stocks as well as other bubble assets and buy  physical gold as the best form of wealth preservation and insurance against the worst economic downturn in Modern Times (since the 18th century)…For those who would like to read more of Egon von Greyerz’s fantastic articles CLICK HERE.