More Inflation & QE To Be Launched By Bankrupt West

Today one of the greats in the business warned King World News that more inflation and QE will be launched by bankrupt West.

Banana Republics in Western Clothing
More Inflation & More Clueless QE “Guidance”
July 4 (King World News) – Matthew Piepenburg, Partner at Matterhorn Asset Management (based in Switzerland):  What the U.S. in particular, and the West in general, are failing to confess is that today’s so-called “Developed Economies” are in fact more like yesterday’s debt-straddled Emerging Market economies, and like all banana republics, the only option ahead for our clueless elites is inflationary.

Titanic Ignorance
I’ve often cryptically joked that listening to investors, mainstream financial pundits or downstream politicians debating about near-term asset class direction, inflation “management” or central bank miracle solutions is like listening to First Class passengers on the Titanic debating about desert choices on the menu in their hands rather than the debt iceberg off their bow.

In short: The real issues are right in front of us, yet ignored until the economic ship is already dipping beneath the waves.

Rising Debt + Declining Income = Uh-Oh.
As for such hard facts (i.e., icebergs), the most obvious are fatal global and national debt levels rising at levels which can never be repaid…. 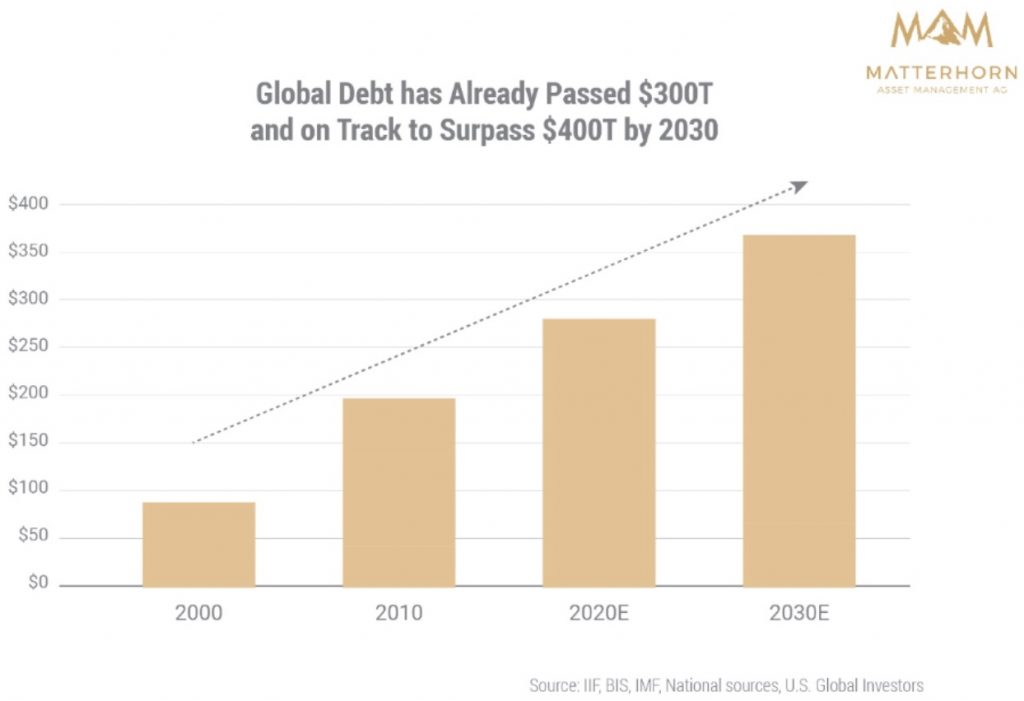 Meanwhile, income from GDP and tax receipts are falling, which means debts are grossly outpacing revenues, which any kitchen-table, boardroom or even cabinet meeting conversation should know is a bad thing…

Toward this end, it’s worth lifting our eyes above the A-deck menu and taking a hard look at the following iceberg scraping the bow, namely: Tanking US tax receipts: 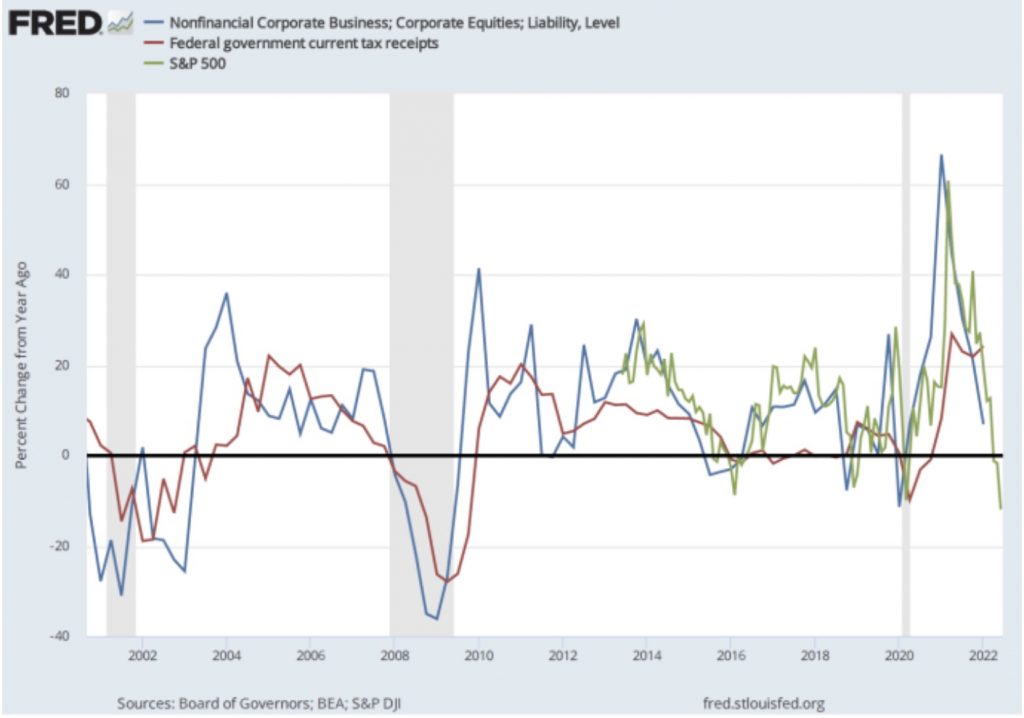 What Biden and Powell might wish to remind themselves is that U.S. tax receipts have fallen YoY by 16%, and are likely to fall even further as markets continue their trend south at the same time the US steers toward a recessionary block of ice.

No Love for Uncle Sam’s IOUs
What’s even more alarming is that as U.S. Federal deficits are rising, foreign interest in Uncle Sam’s IOU’s (i.e., U.S. Treasuries) are tanking.

China’s interest in U.S. Treasuries, for example, has hit a 12-year low, and Japan, as I’ve warned elsewhere, is too broke (and too busy buying its own JGB’s with mouse-klick Yen) to afford bailing out Uncle Sam.

The level of magical Yen creation (reminiscent of the Weimar era) coming out of Japan to “support” its pathetic bond market is simply mind-blowing: 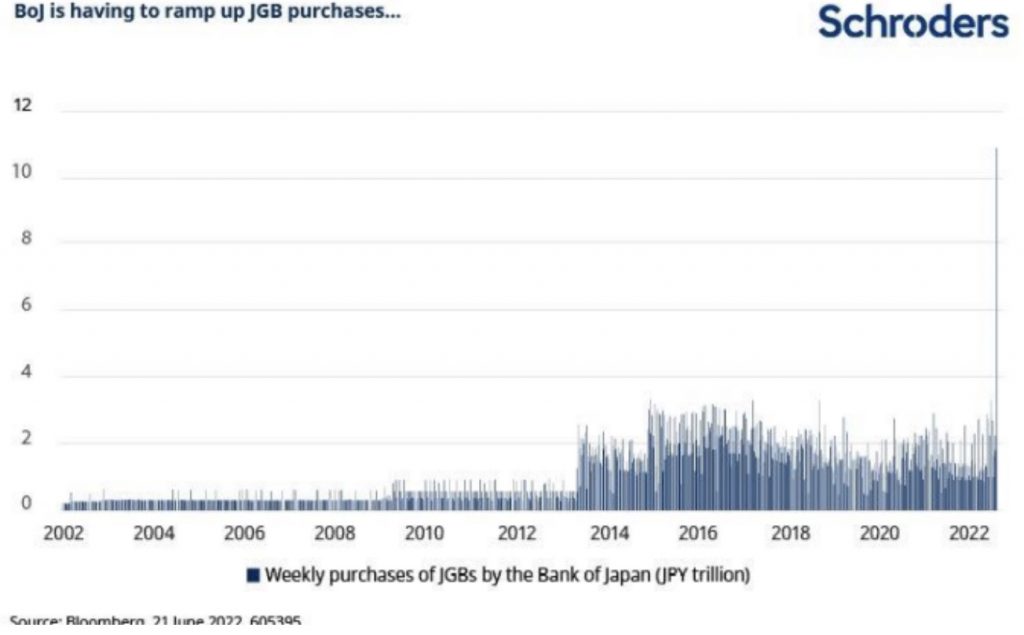 Given the artificial and relative current strength of the USD and the fact that FX-hedged US Treasury yields are negative in EUR, it’s fairly safe to conclude that there will be more sellers than buyers of UST’s. That means rising yields and rates near-term.

That’s a bad sign for Uncle Sam’s bloated and unloved bar tab. Who but the Fed (and hence more QE) will buy his IOUs by end of August? 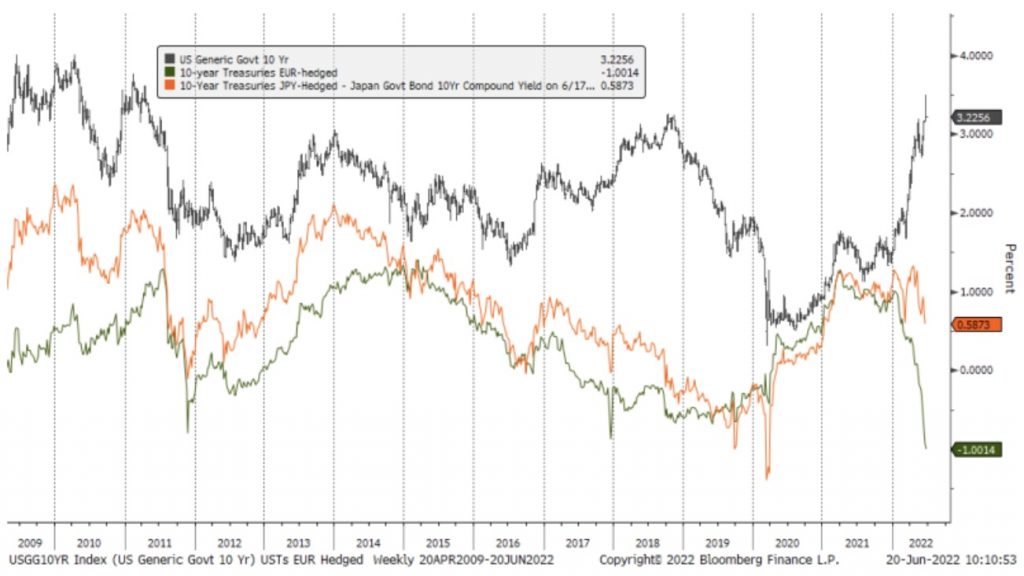 Filling the Deficit Gap: Print or Default?
In the past, the spread between rising debts and declining faith in U.S. IOUs was filled by a magical money printer at the not-so-federal “Federal” Reserve.

But with a cornered Fed still tilting toward QT rather than QE, where will this magical money come from as it sure as heck ain’t coming from tax receipts, the Japanese, China or Europe?

As I see it, the Fed has only two pathetic options left if it wants to fill the widening gap between its growing deficits and declining faith from foreign bond buyers (or even US banks, see below).

It can 1) default on its embarrassing IOU’s and send markets over a cliff or 2) pivot from QT to QE and create more magical (i.e., inflationary and toxic) money.

When it comes between embarrassment or toxicity, my bet is on option #2, which means expect more rather than less QE and inflationary currency debasement ahead.

Saving the Politico’s, Drowning the Citizen
Because neutering one’s currency is the classic/desperate policy taken by all debt-soaked regimes to create a negative-real rate lifeboat for themselves while leaving the average Joe Citizen shivering in an inflationary ocean of pain.

As I’ve said countless times, the Fed WANTS INFLATION to inflate away its debt nightmare and only pretends to fight it.

YoY interest payments alone on Uncle Sam’s bar tab were already at $666B by end of May. If one tacks on the extra interest owed on Treasury Bills and maturing notes, that interest expense climbs to just under $900B.

Again, that’s just the interest expense. Do you really think Uncle Sam wants to (or can afford) to charge himself more (i.e., by raising rates) for his own (and otherwise unpayable) debt?

I Could Be Wrong?
But one must hedge even one’s own highest convictions, and I suppose the Fed could try to increase demand for UST’s (as a so-called “Safe-Haven”?) by lifting rates and crashing the stock market rather than re-heating its money printer.

Anything is possible is a world bereft of good options and riddled with bad financial leaders.

But such an equally pathetic option (i.e., an induced market implosion) just means less capital gains tax receipts from the stock-rich and hence places the Fed right back where it started — staring down the barrel of even less incoming cash, even less consumer spending and hence even less GDP.

In short: I just don’t see any way around the pathetic QE and pro-inflation end-game ahead, which the Fed pretends to ignore and the feckless corporate media can’t even fathom.

Seeking Rather than Fighting Inflation
And so, I’ll say it again and again: The Fed is not fighting inflation, it wants inflation.

Or in plainer English, and as no surprise to Fed-watchers like me: The Fed is, once again, simply lying to the public.

The West: Just Another Banana Republic
Today, whether we wish to admit it or not, the so-called “Developed Economies” in the U.S., Europe and Japan are really nothing more than debt-broke economies, veritable banana republics.

This means their economic profiles, and hence economic policies, more resemble those of “Emerging Markets” rather than “Developed Markets.”

And what have we learned of the EM policies from Argentina to Yugoslavia and every other debt-strapped nation in history?

It’s simple: INFLATION MUST BE KEPT ABOVE INTEREST RATES TO REDUCE DEBT BY “INFLATING IT AWAY.”

The Volcker Option is Dead
This means inflation levels in the West can eventually reach a base-case similar to that of the 1970’s, but unlike that Volcker era, today’s drunk central bankers can’t induce a recession (i.e., raise rates above the inflation rate) when the public debt is above $30T rather than $900B level of the Volcker era.

Stated simply: Short of outright default, the US is in too much debt to conduct anything but an inflationary policy.

The Endless Larry Summers
Meanwhile, an increasingly tired (and let’s be honest, failing) President Biden stands on a Delaware beach and pretends we are good hands, telling reporters he has just been on the phone with none other than Larry Summers to create a plan to fight inflation.

Oh, how the ironies do abound.

Larry Summers, the de-regulating patient-zero of the 2008 derivatives debacle and co-signer to the two most destructive pieces of financial madness since World War II (i.e., the repeal of Glass-Steagall and the 2000 Commodities Modernization Act—aka: Enron “loophole”), is gonna save us?

From what most know of Larry, he’s always looking for an angle to appear like an expert and be at the center of power, while forgetting to remind anyone, including Ray Dalio, that he has been at the very eye of more than one financial hurricane.

In fact, there’s no one I’d trust less to “solve” any financial problem, including the Harvard endowment, which former University President Summers helped crush in 2008 by filling it with the very same toxic derivatives which he had “de-regulated” a decade prior when I was limping around Harvard Yard.

For now, the endless Larry Summers somehow feels a stronger USD and rising bond yields will give foreigners positive real returns and hence attract badly needed foreign interest in U.S. credit markets, when such a plan is likely to have the opposite effect (as per usual with effectively all of Larry’s “plans”).

Big names like China, and broke names like Japan, as noted above, are selling, not buying our debt.

Instead, by raising rates/yields and tightening rather than easing, the “Summers Solution,” like the Powell policy, will merely hasten the demise of the U.S. economy while simultaneously increasing the risk of a U.S. default.

Because Larry seems to have forgotten that current US debt levels can’t endure rising yields/rates.

Simple History Lesson: Gold Rises as Currencies Debase
Again, the only option left for a debt-soaked banana republic like the U.S. is to look in the mirror and act like the banana republic that it truly is—which just means more QE will re-appear, and more inflation and more currency debasement lies ahead.

Without central bank “support” for these toxic bonds, no one wants to touch them—not even the big boys. When liquidity dries up, QE will have to replace current QT.

See why gold’s golden era has yet to even begin?

Eventually, the rising tide of more debased fiat currencies will be impossible to hide and gold’s openly repressed and manipulated pricing levels will rise from the ashes of a broken financial system and an increasingly neutered/debased US dollar…This will link you directly to more fantastic articles from Egon von Greyerz CLICK HERE.

***To listen to Matthew Piepenburg discuss why the coming collapse will be far worse than anything we’ve witnessed this century and much more CLICK HERE OR ON THE IMAGE BELOW.