With investors concerned about the recent gyrations in global stock markets, plans to unleash QE4 have already begun.

Plans To Unleash QE4 Have Already Begun
May 22 (King World News) – Here is what Peter Boockvar wrote today as the world awaits the next round of monetary madness:  One has to go back to 2011 to see commercial and industrial loan growth this slow according to the Fed’s weekly data released late Friday. The y/o/y gain moderated to 2%. It was growing at an 8% y/o/y pace around the time of the US election and the y/o/y increase was almost 11% one year ago. This weakness is not new and has been highlighted multiple times over the past few months. On an absolute dollar basis, outstanding C&I loans are at the same level they stood at 7 months ago. See chart (below). 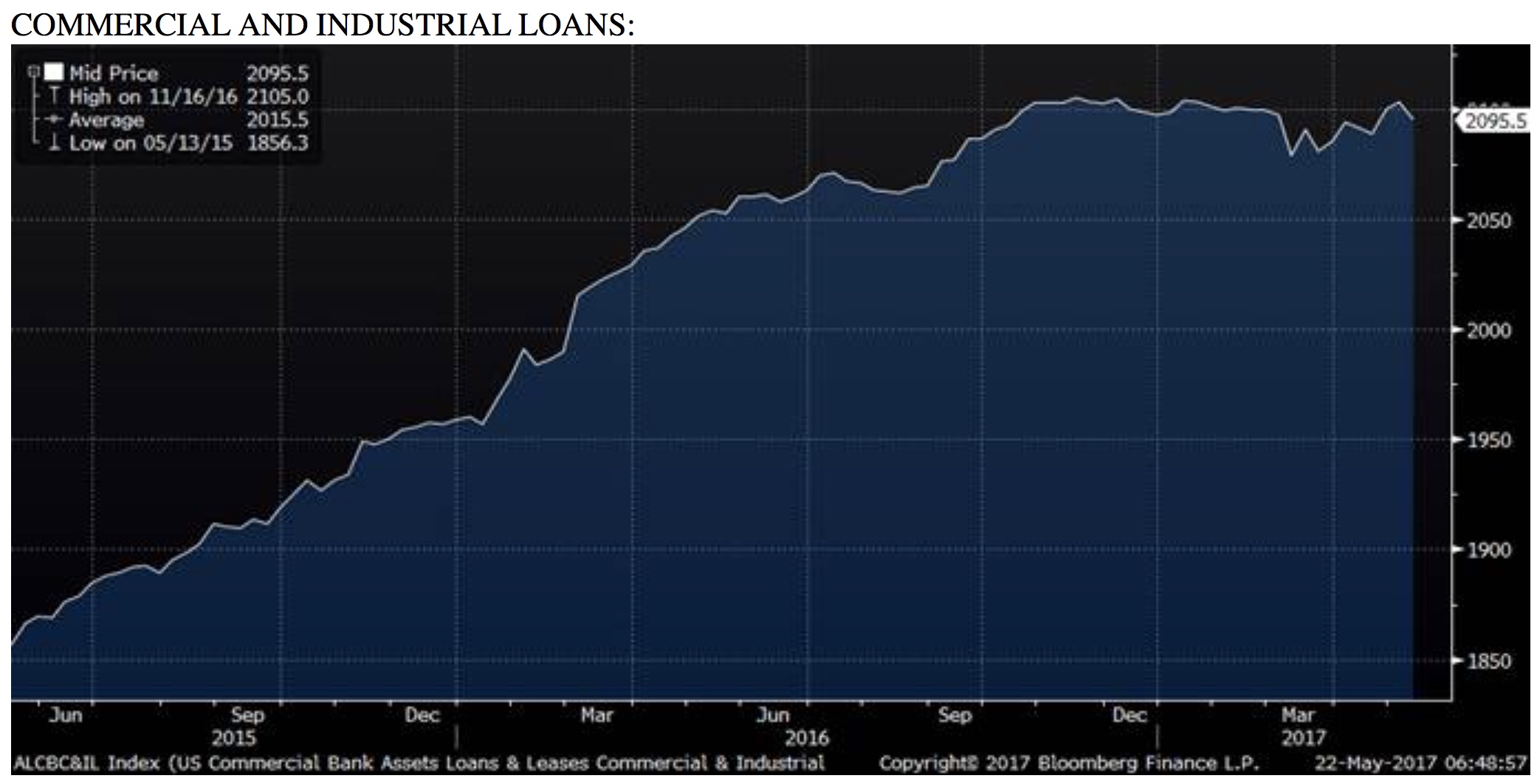 Total loan growth has slowed to a 3.8% y/o/y growth rate. This pace was 6.4% in 2016 and was growing at 7% y/o/y last November. Is it in response to higher interest rates as 3 month LIBOR has almost doubled over the past year? Is it is due to the unknown’s of the timing of tax, regulatory and healthcare reform? Is it just a natural exhaustion of economic growth as we’ve pulled forward a lot of economic activity already and thus there is no more pent up demand? Is it companies tapping the capital markets instead of banks? I’ll answer all of the above…

With respect to auto loans, in a replay of the mid 2000’s, Moody’s last week said that Santander Consumer USA Holdings, a large subprime auto finance company, checked the income on only 8% of individuals they lent to and whose loans ended up in ABS securities that Moody’s rated.

All this loan data release follows comments from non voting member James Bullard on Friday who said he would go along with a rate hike in June if voting but also said the case for a hike “is not looking that great” because of the mediocre economic data he’s seen of late. On the other hand he believes the Fed should get on with reducing the size of its balance sheet. Therein lies an inherent contradiction in Bullard’s comments. He and other Fed members, including Yellen, think that reducing its size will just be some benevolent process that won’t be a big deal. I strongly disagree, again considering the dramatic impact on markets when QE was full on.

Fed Already Planning To Unleash QE4
A smaller Fed balance sheet is quantitative tightening just as the enlargement of it was quantitative easing. The other thing that amazes me is Bullard and others are now arguing that QE should be used again if needed to ward off future downturns. They therefore have not looked at their own record that QE completely failed in generating sustainable economic growth with their own actions as evidence. They can argue that QE1 was to ‘save the financial system.’ I’ll give them that but the only reason we had QE3 was because QE2 and Operation Twist failed in its stated purpose. And QE3 failed in helping the economy as well. It only blew up more asset bubbles instead. I’ve always said that introspection and self criticism do not exist within the walls of the Federal Reserve.

***ALSO JUST RELEASED: This Is Exactly How China Plans To Send The Price Of Gold Skyrocketing CLICK HERE.