PANIC: We’re Seeing Panic-Like Selling On A Scale Rarely Seen During The Past 40-60 Years

Today one of the greats in the business said we’re seeing panic-like selling on a scale rarely seen during the past 40-60 years.

Emotional selling pressure
This is going to be a relatively quick post before the open. Once again, traders are re-pricing assets based on pre-market considerations, which is generally an emotional decision.

It is quite rare to see equity markets suffer more than a 2% decline overnight. Institutional investors try to avoid these times because of lower liquidity, especially in an already-illiquid market. But when people panic, they panic together…

Currently, the S&P 500 futures are indicated to open more than 2% below Wednesday’s close. With such volatile conditions, this could change quickly, so we’ll have to see how it pans out.

Since the inception of the futures market in 1982, such large negative gaps to a one-year low have only occurred during bear markets. 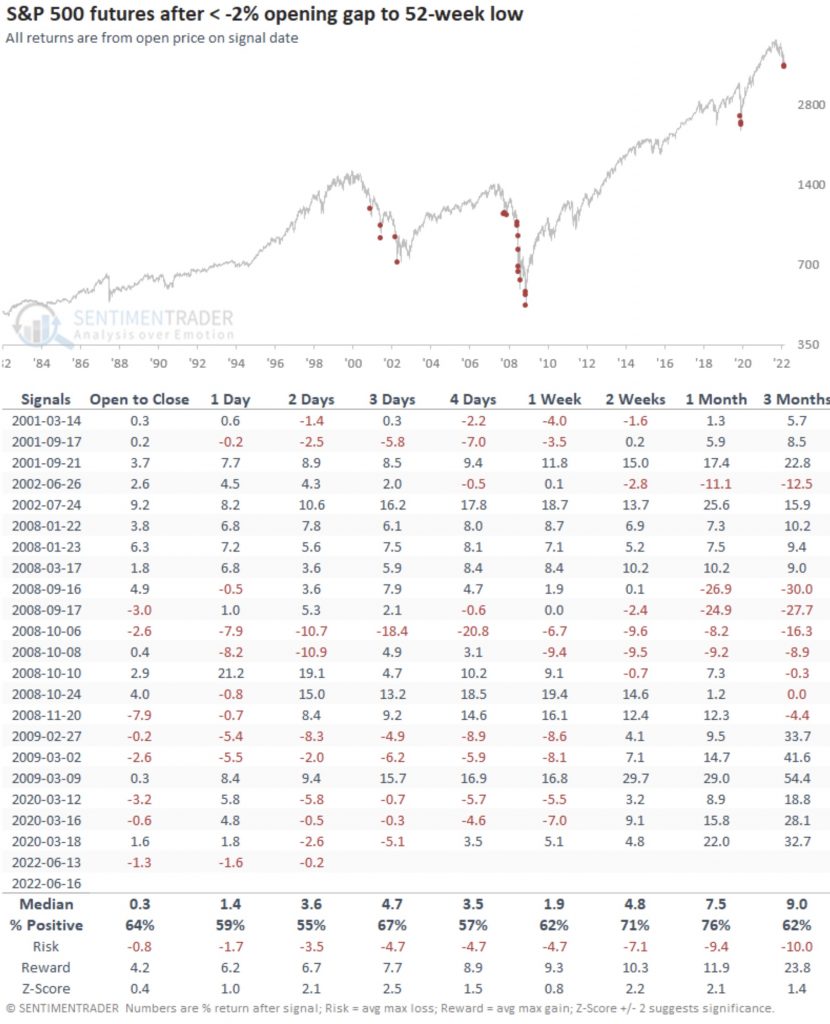 Here’s the kicker – it’s the 2nd time in a week that traders faced this kind of carnage. When we look at clusters, the market environments stand out. 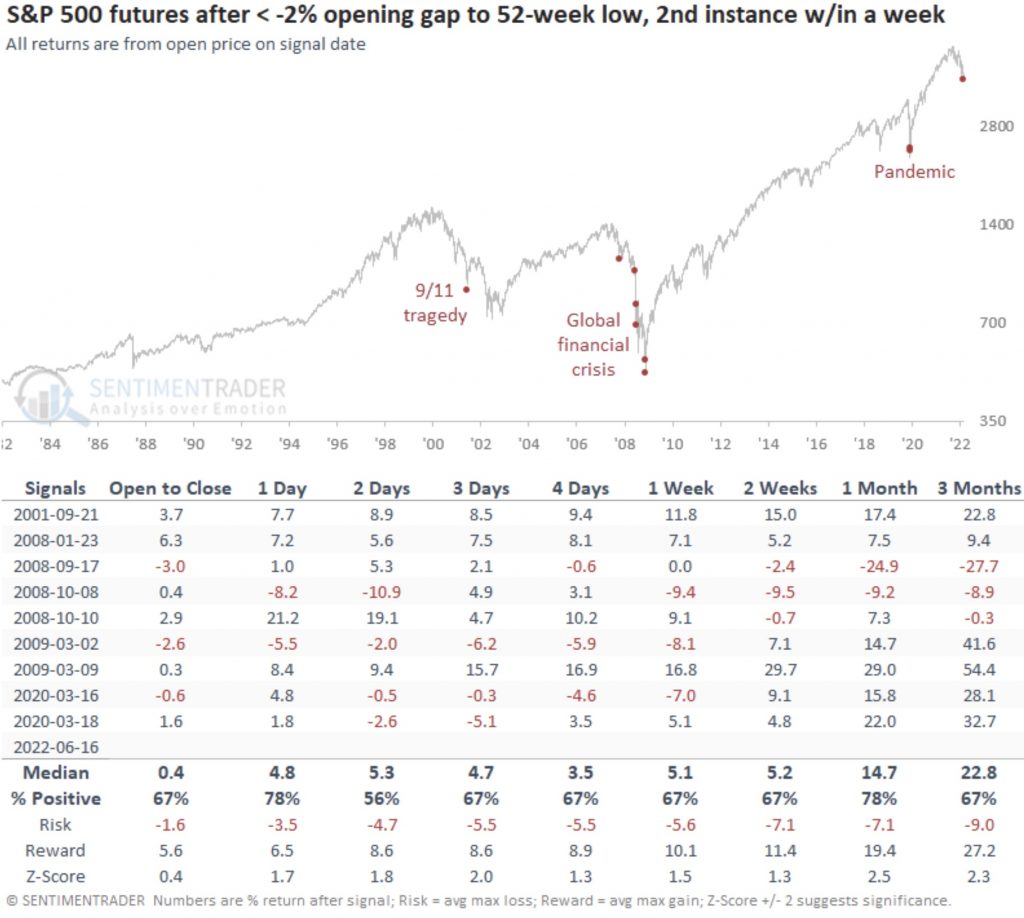 Similar bouts of get-me-out-now behavior have only occurred after 9/11, which marked a multi-month bottom. And it happened near the end of the pandemic panic. But it was also triggered relatively early during the financial crisis. The first instance preceded a nice rally; the subsequent ones did not until the end.

If we relax the gap to -1.5%, this would be the third within a week. When triggering at a 52-week low, the same instances pop up, though these were more focused near the end of the financial crisis. Either one or two weeks later, all of the signals showed a positive return. 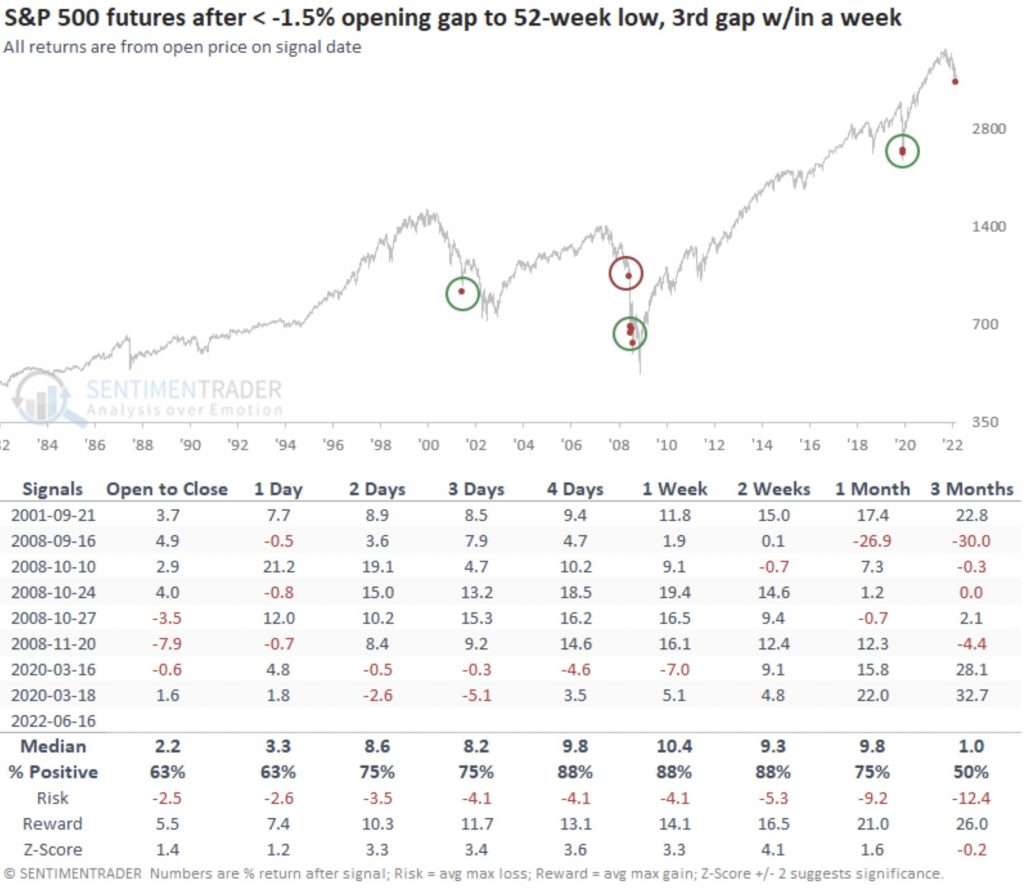 The key is whether it’s too late for existing investors to sell. In almost every case we’ve looked at, the answer is yes. The glaring exception, and it’s really the only one at this point, is 2008. For selling existing long positions to make sense now, over a multi-month time frame, we have to believe there is a systemic risk to the financial system and we’re only in the early innings of it. This is another example of why Jason Goepfert is the best in the world at what he does – providing actionable market data. To subscribe to the internationally acclaimed work Goepfert produces at SentimenTrader CLICK HERE.

ALERT: Look At What Just Hit An All-Time Record High