As the world edges closer to the next crisis, today the man who has become legendary for his predictions on QE and historic moves in currencies spoke with King World News about what will happen when the real panic begins to unfold.

Unlimited Credit Creation At Work
July 14 (King World News) – Egon von Greyerz:  “Investors today have Hobson’s Choice. But they don’t understand the options open to them. Thomas Hobson had a livery stable of 40 horses in Cambridge in the 16th-17th centuries. But customers only had a choice of one horse. They could either take the one nearest the door or none at all.

Below is the choice of asset classes investors have today and where 99% or more of global liquidity is invested. The problem is that these assets are massive bubbles as a result of unlimited credit creation and money printing in the last few decades.

So if we assume that the horses in the stable represent the asset classes below, they will all be a very poor choice:

The problem is that investors have been conditioned to put all their funds into one or several of the asset classes above and that is their Hobson’s choice. Very few will be overly concerned about the risks before them today and nobody can believe that all the horses can be lame or unfit.

Some investors might reallocate part of their assets to cash as market volatility increases. But they can’t earn any return on their cash with rates anywhere from negative to just positive. And then they have the bail-in risk as banks have major losses. Then, as all currencies finish their run to ZERO, the complete debasement of money will have completed its course. Remember that they all have already lost 97-99% since the Fed was founded in 1913.

Decades of investment gains which are virtually all due to credit expansion have led investors to believe that markets always go up in the long run and also that they have magical money making skills. Little do they understand that virtually no skills have been required to make money in markets in the last 70 odd years. See my article about Alfred, a stock market winner with zero talent.

A Devastating Event For The World
What few realize is that we are now in the final innings of an investment game that will end badly. Major stock markets in many countries, including the Dow and S&P, are now finishing their bull market moves, both short term and long term. The fundamental position has been indicating high risk for a while and the technical picture is now confirming that we are ending a major secular bull market that will turn into a catastrophic secular bear market which will be devastating for the world.

Markets are likely to top very soon. Whether the bear market will start with a crash or just an initial slow move down, we will soon see. In either case, the autumn of 2019 will be one that investors will not forget.That will be the time when sentiment will change course dramatically. Confidence and euphoria will turn to fear and despair. Once the market realizes that this time central banks have no weapons left in their armory and that money printing or lower rates have no effect, there will be real panic. When the last crisis started in 2006, US rates were above 5% and German rates over 3%. Today US rates are around 2% and German rates negative. In addition, 23% or $13 trillion of Sovereign debt now have negative rates. So there is virtually no margin to make meaningful interest rate cuts.

Yes, there will be massive money printing because that is the only thing central banks know. But we must remember that global debt has doubled since the last crisis. In 2006, global debt was $125 trillion and today it is $250 trillion. None of that money has benefitted the general economy. Instead, it has only inflated asset markets. When the next money printing round starts, no one will benefit. The world will realize that you cannot create wealth by printing worthless pieces of paper or adding zeros on a computer. And finally, this time central bankers will learn that they won’t be able to solve a debt problem by adding more debt.

Here Is What Will Happen When Real Panic Begins To Unfold
We will most likely see central banks lowering short term rates as they do every time they panic. But the long end of the market will most probably go the other way and long term rates will go higher. As the panic in the bond markets, both sovereign and corporate, leads to major liquidations of bonds, long term rates will rise. The 10 Year US Treasury, which has gone from 3.25% to under 2% in the last 8 months, has most likely bottomed and will in the next 2-4 years be back in the teens where it was in the early 1980s.

So let’s go back to Hobson. Investors will go for Hobson’s lame horses, which in their case will be  bubble assets like stocks or bonds and maybe some increase in liquidity. Virtually nobody will think of alternatives. Very few are aware that there is an asset class that has outperformed stock markets since the beginning of this century. As the chart below shows, global equities have lost 70% vs gold since 2000 and are likely to lose another 95% in the next 3-6 years. 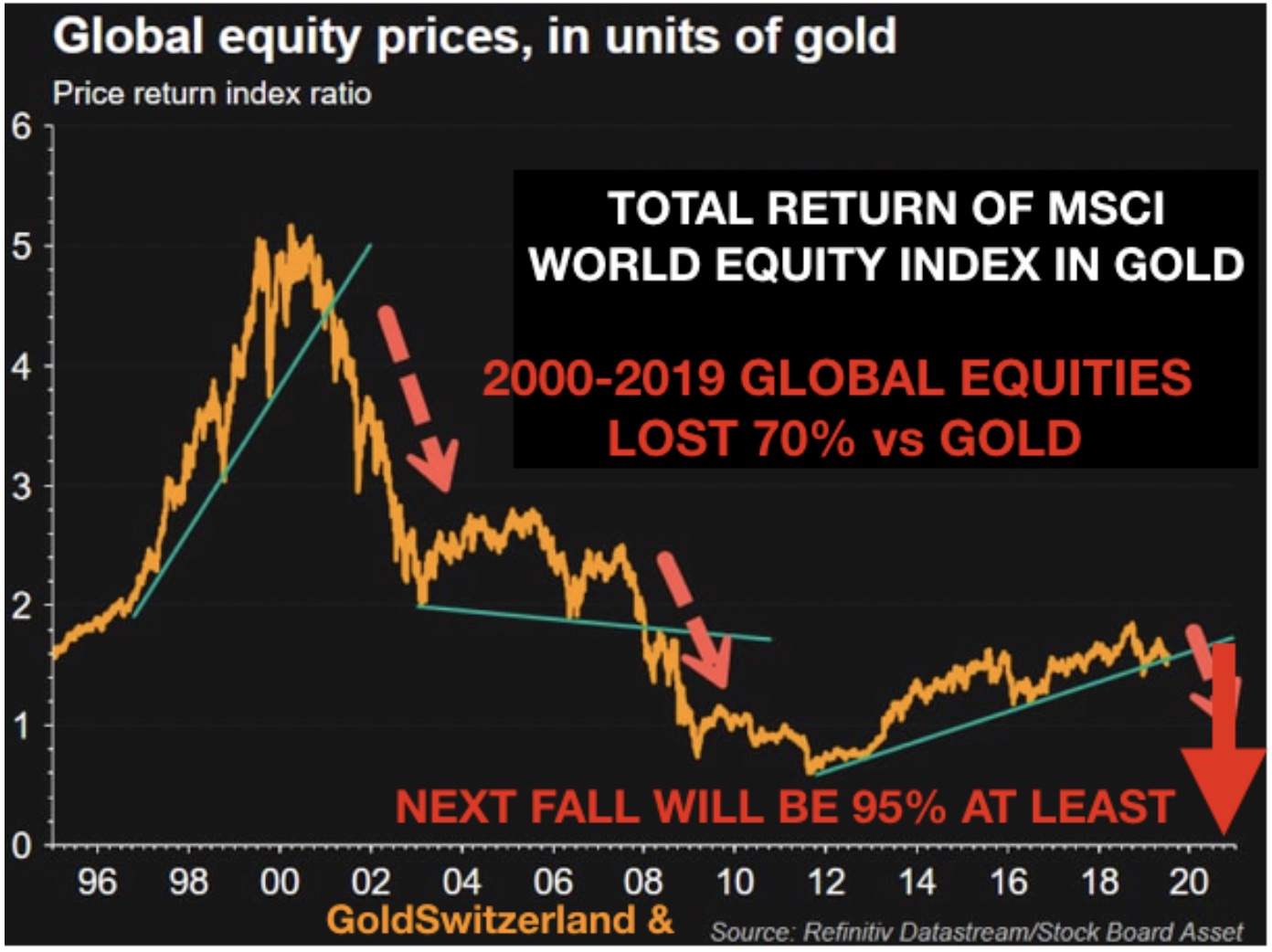 So instead of protecting against the total wealth destruction that the world will experience in the next few years as all the bubble assets implode, investors will take Hobson’s choice of lame assets that will be virtually worthless by 2025.

Why not follow the Silk Road countries that continue to buy the annual mine production of gold. As the chart below shows, since the finical crisis started in 2006, these countries have bought almost 30,000 tonnes of gold. 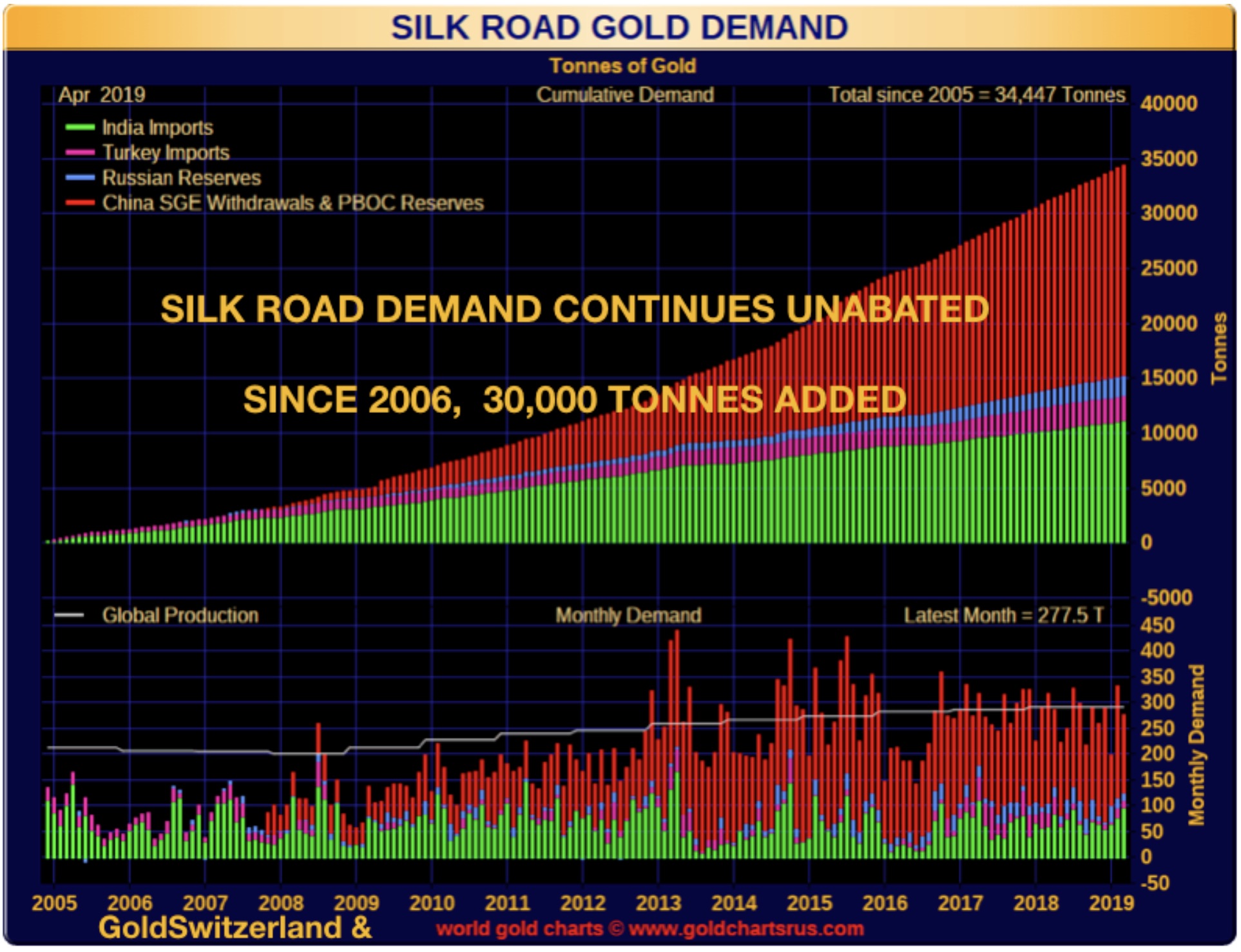 The Biggest Gold Bull Market In History
The $1,350 level is now extremely strong support, and as I have already stated, the price is unlikely to go below that level more than momentarily. The risk is now to be left behind in the coming biggest gold bull market in history. All the surprises will be on the upside.

Gold will reach multiples of the current price, but we are not invested in gold for the coming major price move. Instead, gold is for protection against the massive risks in all financial markets and in the financial system. Gold is insurance and gold is wealth preservation.

Silver
Finally, a word about silver. Silver is much more volatile than gold and therefore not the same degree of wealth preservation. Still, we are likely to see a most spectacular move in silver starting shortly. Silver is incredibly undervalued and depressed and once it breaks out, is likely to explode. Below is a chart of silver adjusted for real inflation. 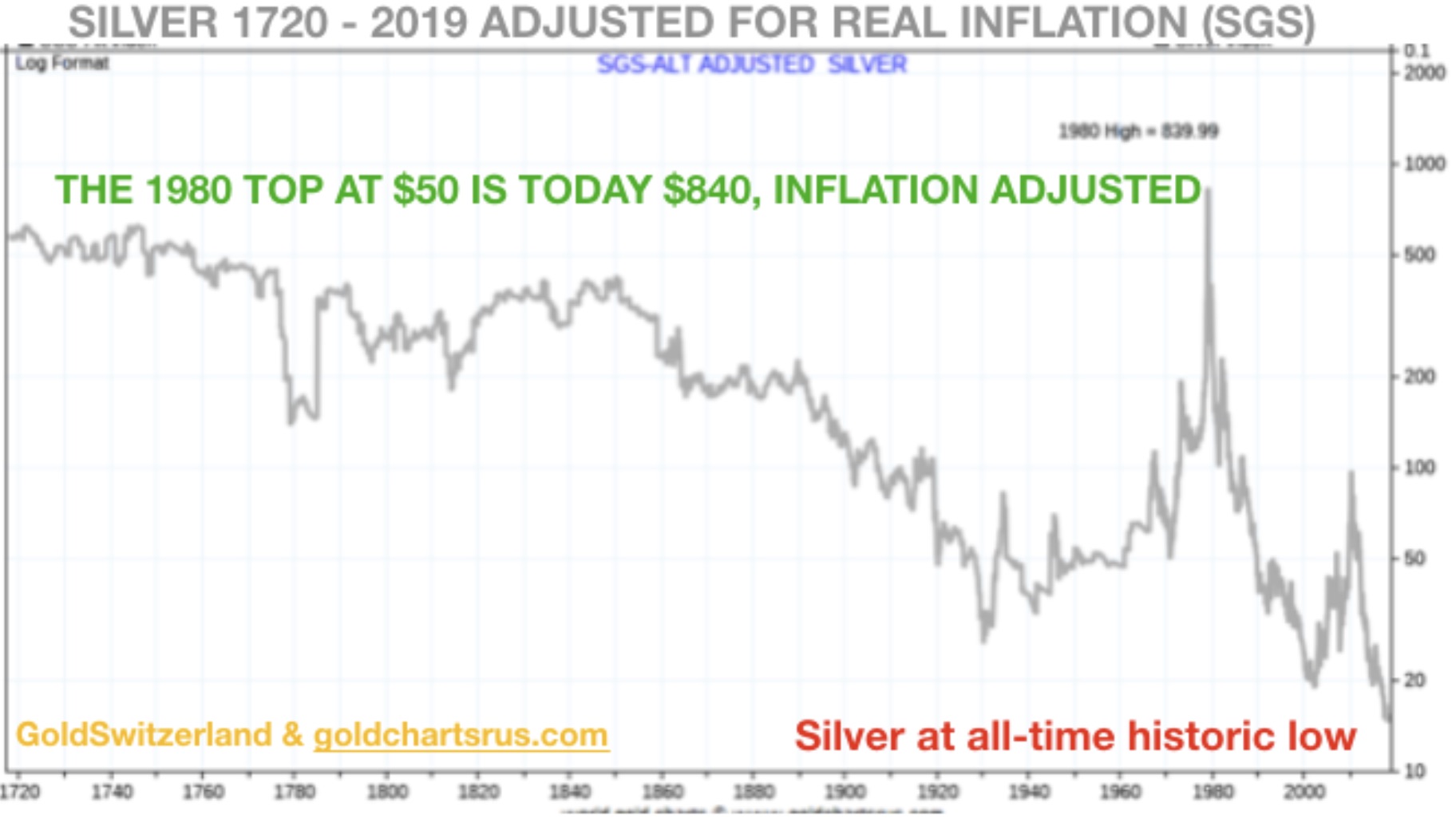 Holders of physical gold and some silver will not only protect their assets but are also likely to see the price of both metals reach levels that are difficult to fathom today…For those who would like to read more of Egon von Greyerz’s fantastic articles CLICK HERE.

AUDIO NOW RELEASED!
King World News note: There was a short delay in the release of the latest audio interview with the man who helps to oversee more than $200 billion and you can now listen to it by CLICKING HERE OR ON THE IMAGE BELOW.

Big Picture Bullish For Gold But Look At What Hedge Funds Are Up To, Plus Chart Of The Week And Many Other Surprises CLICK HERE TO READ

Silver Preparing To Break Out, Fed & Its Bubbles, Deja Vu Summer Of 2007, Euro vs Dollar, Plus Miners vs Gold CLICK HERE TO READ