The man who has become legendary for his predictions on QE and historic moves in currencies and metals told King World News that people need to prepare for the greatest crisis in history that is about to be unleashed.

One current Central Bank head and two former ones have recently spoken words that make no sense.

Let’s start with the Head of the Fed Powell:

“We need to watch and watch carefully and see if the economy is evolving consistent with our expectations and adapt policy accordingly.”

Hmmm!!! The Fed’s official expectations have consistently been wrong for at least 34 years since Greenspan became chairman. They have never forecast any major event and not even minor ones. They have never seen a crash coming and have always waited with any action until well after the event.

And once they take action, they will always overreact and stimulate the economy with free  money and low interest rates even though it has no effect in the end. But it will have consequences, and dramatic ones since the explosion of the massive bubble they now create will lead to an implosion for the world economy…

“I don’t think we are about to lose control of inflation. I expect improvement by the middle to end of next year.”

Hmmm!  The Fed’s favourite inflation indicator, the PCE Deflator (GRAPH) is at a 30 year high. Since the Treasury or the Fed have not been correct in any prediction, how can they now believe that with inflation tuning to the highest in 30 years that this is transitory.

How can they totally disregard the $10s of trillions of money creation, plus the energy inflation plus the food inflation etc, etc.

The Fed and Treasury are masters at both ignoring and not understanding the consequences of their heinous actions. 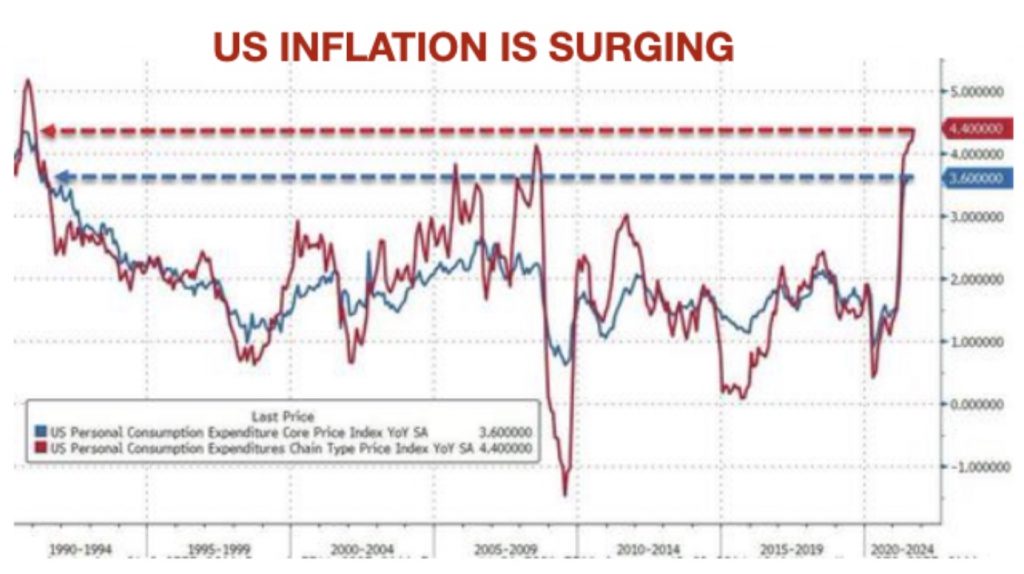 Finally, the former Head of the Bank of England is putting fuel on the inflation fire:

Carney has suggested that private banks in the financial sector must produce a change in the plumbing of the financial system in order to push liquidity into green energy and not lend to nuclear and fossil fuel expansion. “Climate change must become the fundamental driver of every investment decision or lending decision.”

This is of course already happening. Investment in carbon fuel is falling rapidly whilst wind, solar and other alternative energy sources are being starved of capital.

AND THIS IS WHY ENERGY PRICES WILL GO UP DRAMATICALLY.

Even if technology gradually will make these alternative energy sources more efficient, they are unlikely to anywhere near compensate for the falloff in carbon fuel energy by 2050 which is the COP26 target.

IS COP26 JUST COSTLY POLITICAL POSTURING?
Right now, 200 countries and up to 30,000 people are involved in the COP26 conference in Glasgow. COP stands for Conference Of Parties. The Parties have signed up to the UN framework Convention of Climate Change. COP is a convenient and totally non distinct name that could involve anything from 2 parties to 200 countries. To be both PC (Politically Correct) and Woke today, you must closely follow and agree with this group led by bureaucrats who have little regard for the economic consequences of their actions.

The main purpose of COP is to halve global emissions by 2030 and reach net-zero by 2050. President Xi of China will not be present although his country is responsible for almost 30% of global emissions. The US is a good second with 15% of the world’s carbon emissions.

So in Glasgow we can see a motley mixture of bureaucrats and members of the elite flying in by private jets and jumbos in order to preach to the world the elimination of the carbon footprint by 2050. They should have followed the example of Greta Thunberg when she sailed from Europe to the US in a catamaran. The problem with these ultramodern boats is that the carbon footprint to produce them is probably a lot higher than you ever save by using them for transport. It is the same with electric cars. The carbon footprint of the battery (including replacement and scrapping) is today not much smaller than for a fossil fuel car.

COP26 BUREAUCRATS CAN REGULATE THE CLIMATE
So these “climate COPS” currently meeting in Glasgow are telling the world that carbon emissions will be neutral by 2050 and temperatures not more than 1.5 degrees Celsius higher. Well, mankind has never had the power to permanently change global temperatures before and the current alternative energy sources are unlikely to be a sufficiently big magic wand to achieve this.

But since climate cycles are likely to make temperaturs lower anyway in coming decades the COPS might just claim that they were the ones who did it and take all the credit. We could even see much lower temperatures rather than a mere 1.5 degrees increase which would make them into Super-COPS.

WE SHOULD FOCUS ON ECONOMIC CYCLES RATHER THAN WEATHER CYCLES
Politicians, businessmen and the woke crowd are now focusing on the climate and the environment. Clearly this is an extremely important area, especially when it comes to pollution.

But in my humble view, mankind’s influence on global climate is virtually nil. I know this is a controversial view and many will write in to argue with me. Since I am not likely to be around in 2050, I will not go into this argument so don’t expect any answers. Future historians and scientists will know in 29 years time, so you’d better wait until then!

But where politicians and the elite could have had a bigger influence on is the world economy. However, we have probably already reached the point of no return.

Global debt has grown exponentially since 1971 when all monetary discipline in the world was thrown out of the window by taking away the gold backing of the dollar and of all global currencies. In 1970 global debt was under $5 trillion and 30 years later it was $87 trillion. The global risk increased dramatically with the Great Financial Crisis in 2006-9, leading to an explosive growth of global debt which at $300 trillion is now a staggering 60x greater than 50 years ago.

And this dear COP26 attendees in Glasgow is what will affect your lives to a much greater extent in the next 10 to 30 years rather than the climate.

But it is of course much easier to focus on something “nebulous” in the far distance of 2050 rather than worry about the financial and economic  global collapse which is imminent.

Politicians love grand fuzzy ideas that cannot be measured until they themselves are far gone and happily forgotten.

Although the world’s debt problems are no longer soluble and it won’t be possible to put Humpty back together again, at least politicians and other bureaucrats could focus on   cushioning the fall. But they won’t do that either because their masters, the elite and the bankers have more exciting things to focus on. With all asset prices exploding, the elite is not interested in solving the problem. Instead they want more fuel on the global fire. And the bankers are in the same position. They are currently making more money than ever on bigger and bigger deals and higher asset prices.

And no one with a vested interest will stop this bubble from expanding. And nobody else has a chance of influencing this massive problem.

PREPARE FOR THE GREATEST CRISIS EVER
So instead, we normal mortals need to focus on our own survival of the “Greatest Financial Crisis Ever”.

The solution is of course easy.

Finally, the graph below proves that gold in relation to US money supply is as cheap as in 1970 and in 2000. Please don’t ignore the opportunity of a lifetime to both preserve  your wealth and own an asset with a substantial wealth enhancement opportunity. 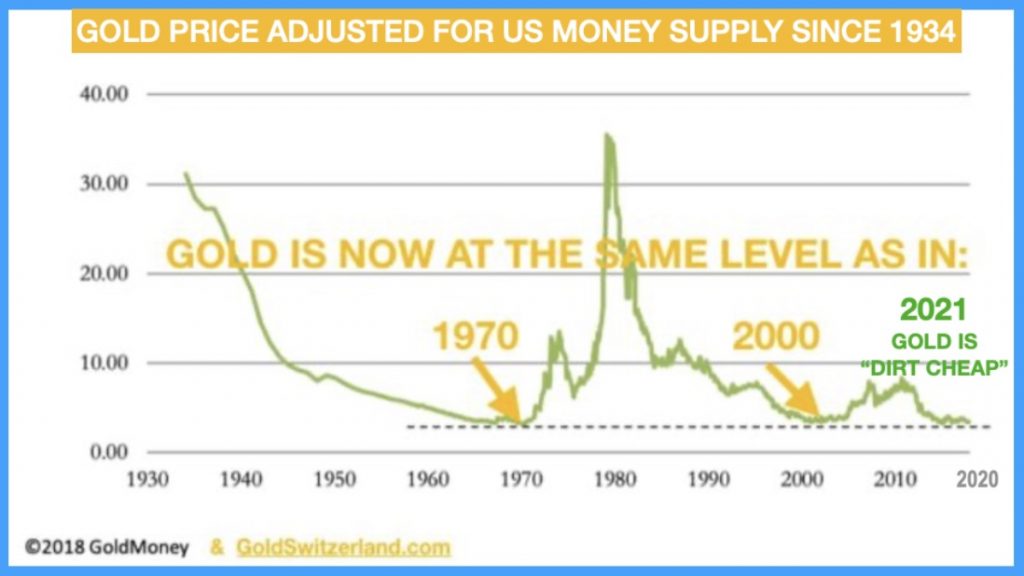 Greyerz Just Warned Investors To Prepare For A Hyperinflationary Collapse

The Greatest Disconnect, Plus Expect Even More Physical Gold Demand