As we get ready to kickoff trading at the start of a new week, today the man who has become legendary for his predictions on QE and historic moves in currencies, told King World News that this ticking time bomb that represents a staggering 1,070-times all central bank gold will unleash the next global crisis.

Doing “God’s Work”
March 12 (King World News) – Egon von Greyerz:  “According to Wikipedia, gambling is the wagering of money (or something of value) on an event with an uncertain outcome. Three elements are required for gambling, consideration, chance, and prize. Thus, you make a bet and if you are lucky you win a prize but you can also lose it all. Gambling has been around for thousands of years and maybe longer. The first 6-sided dice dates back 3000 years. Eventually gambling became more organized as casinos were established. The first well known casino was set up in Venice in the early 1600s…

Egon von Greyerz continues:  “Casino means a small house and the house was the banker. The odds were naturally always in favor of the house and that has not changed for centuries. In the last 100 years, the bankers, or the House, have made fortunes, and especially in the last 25 years as market manipulation has taken massive proportions.

Over the last 100 years, governments and central bankers have made the investment markets into a casino, where the banker is the winner every time. First, the banker issues the money with the help of infinite leverage. Then he sets the conditions – interest rates, fees, terms, etc. To further improve his odds, the banker also manipulates markets so that they are always in his favor.

Doing “God’s Work” Using Derivatives
The most perfect market from the bankers’ point of view is the derivative market. This is the biggest financial market in the world. It consists primarily of unregulated Over the Counter (OTC) instruments. A derivative is an instrument which derives its value from underlying assets such as stocks, stock indices, bonds, foreign exchange, gold, silver etc. 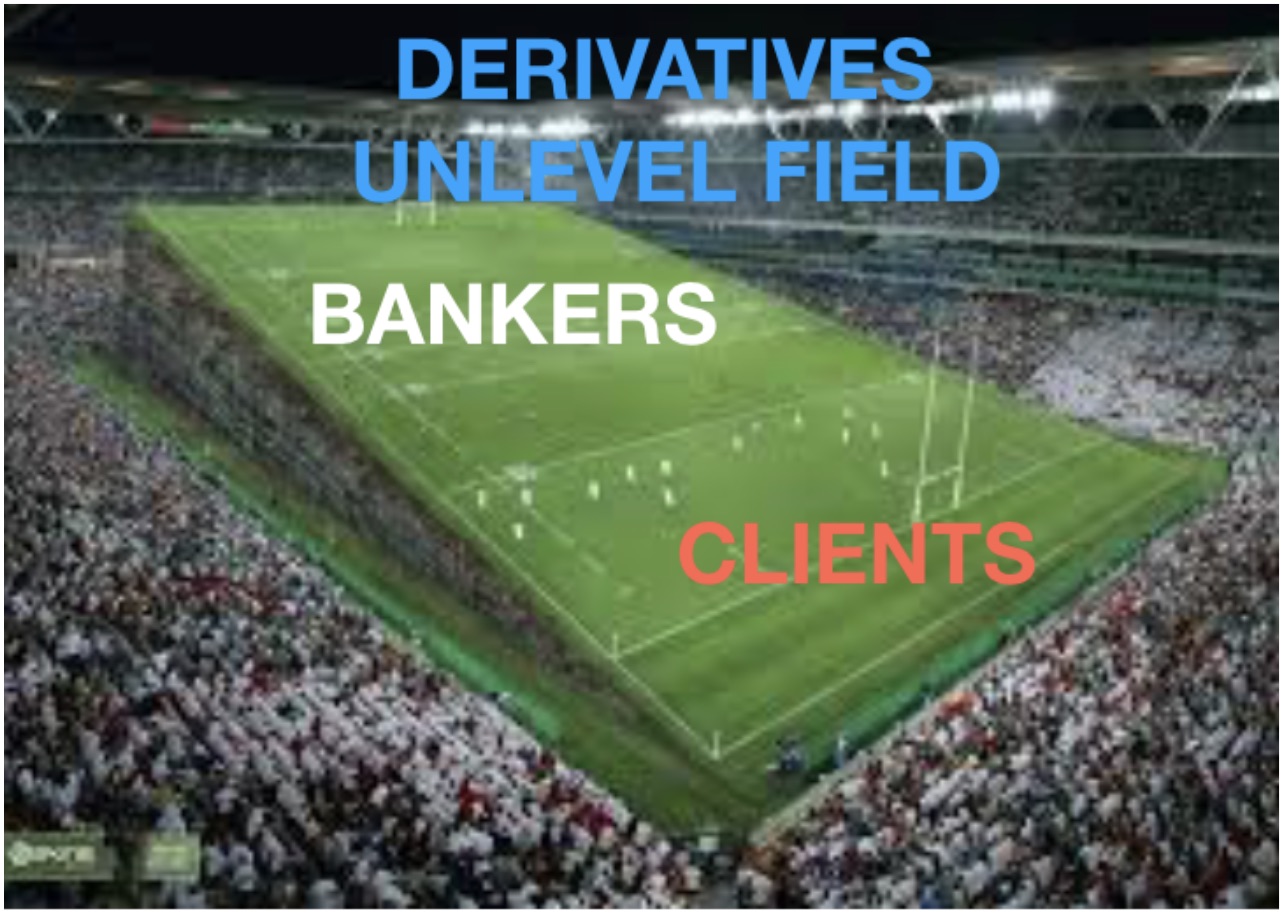 Derivatives are the biggest money spinner of the financial system and have made many bankers very wealthy. The system is totally skewed against the buyers of the derivatives. Prices are set so that the issuer of the derivative cashes in virtually every time. Prices are always set for the bank to collect 100% of the premium and never pay out. As maturity of a derivative in the money approaches, the bank will do its utmost to manipulate the price to make the derivative worthless. And it is important to understand that the value of a derivative is derived from underlying assets but there is absolutely nothing backing a derivative except for the credit standing of the issuer.

Derivatives Equal 1,070-Times All The Central Bank Gold
Total derivatives outstanding are around $1.5 quadrillion. The Bank of International Settlements (BIS) reports a figure of $500 trillion. But that figure is not credible since it was adjusted some years ago after netting off a major part of the gross exposure. The gross derivative exposure is 1,070-times central bank gold. So if central banks needed to cover an implosion of the derivative market with gold, the gold price would increase over 1,000 fold form here to $1.4 million. This might not seem a credible price but we must remember that gold reached 100 trillion Marks during the Weimar Republic and is now 53 million Bolivars in Venezuela (the black market price is 370 million bolivars). As global credit markets implode and money printing starts in earnest, a $1.4 million gold price might be much too low. 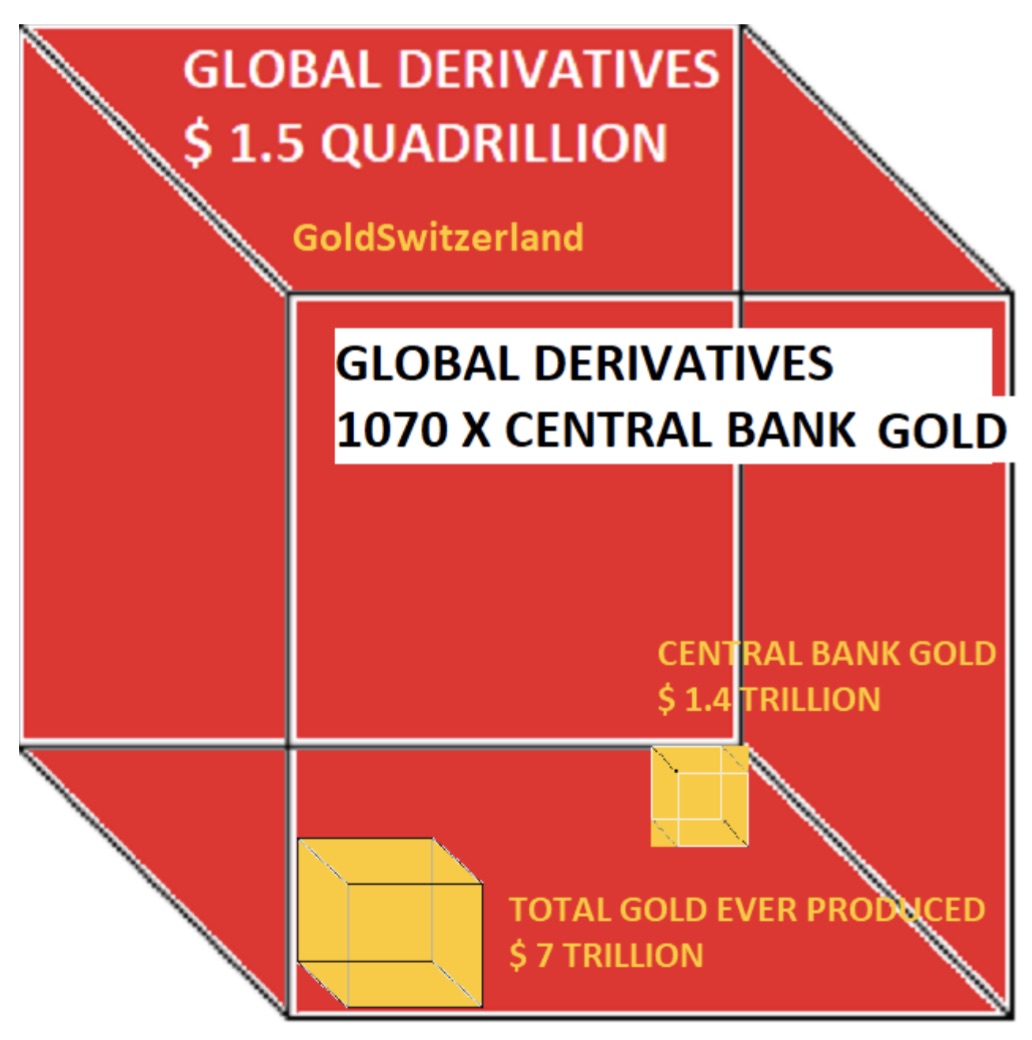 If we look at look at the derivative exposure of some of the major banks, it also reveals a very dire picture:

Unlikely To Survive
With equity of 0.15% to 0.5% of total exposure, these banks are unlikely to survive the next crisis.

The exposure shown is most likely well below the real exposure since it is based on the BIS calculation. The real figure is probably twice as high. Still, it shows the massive risk that these banks are exposed to. Central planners will argue that this is the gross exposure and that the net position is a fraction of the gross. That argument is valid in an orderly market when counterparty pays. In 2007-9, we saw what can happen when counterparty fails such as Lehman. The global financial system was then saved at the last minute. But with global debt having doubled since then and risk up manifold, next time we have a global crisis, counterparty is very likely to fail.

The risk in the derivative market is not recognized by the banks, central banks or the market. In the 2007-9 financial crisis, it was mortgage linked derivatives that brought the world to the brink. Next time around it will also be the derivatives market that will bring the financial system down. But this time the system is unlikely to be saved. Interest rates are already low and money printing will have no real effect.

A 1,000-Fold Increase In Gold & Silver Prices?
As the cube shows above, there is too little gold in the world to save the system when fiat money becomes worthless. Or to look at gold in a different way, gold and silver will need to appreciate at least 1,000-fold and probably a lot more, to reflect the losses in the system and the debasement of money.

Gold at $1,320 and silver at $16.50 represents incredible value in a financial system that is unlikely to survive in its present form. Precious metals are the only asset class which will maintain purchasing power in the coming financial crisis. But most likely gold and silver will do a lot better than just maintaining value. What is guaranteed is that paper money will become worthless in the coming crisis and that most bubble asset classes will decline 75-95% in real terms. Gold is nature’s money and, as such, will be the only money that will survive the coming crisis just as it has for over 5,000 years.”

On The Road To Currency Destruction