After a rough day in the markets, this is how bad things have become but buckle up because it will get even worse.

BUCKLE UP: Hints Of Second Wave Of Demand Destruction
April 15 (King World News) – Jeff Snider at Alhambra Partners:  What’s going on right now in the global economy is mostly the first of two pieces. Waves, if you like. The economic shutdown is an artificial dislocation, a non-economic factor that is interrupting regular activity and business for non-economic reasons. Because it is near-total in most places, this first piece is going to produce ridiculous numbers across all the economic accounts.

Far more important is the second piece, or second wave. That’s the true demand shock when we find out by just how much, and for how long, those massive declines stick around. The initial collapse hurts, like it did from October 2008 onward, but it was the permanent loss of demand which was the real economic killer.

For the moment, what is being revealed to us is the contours of the downdraft. Today, Retail Sales and Industrial Production both from the US. And both these series had previously displayed how the American section of the global economy was in rough shape entering the first wave of GFC2.

What that proposes is how what we’re already seeing might not be exclusively non-economic. The vast majority of the contraction is, obviously, but when the data keeps coming in worse than every expectation this suggests “something” might have amplified the negativity of the initial wave a little extra.

A pre-existing downturn would fit the circumstance, already weakened businesses and consumers heading right for the economic bunker at the first signal of shutdown.

According to the latest estimates from the Census Bureau, Retail Sales in March 2020 were down 7.02% (unadjusted) from March 2019. On a seasonally-adjusted basis, sales last month were 8.73% less than they had been in February, by far the greatest single month decline in the modern series (which dates back to 1992). 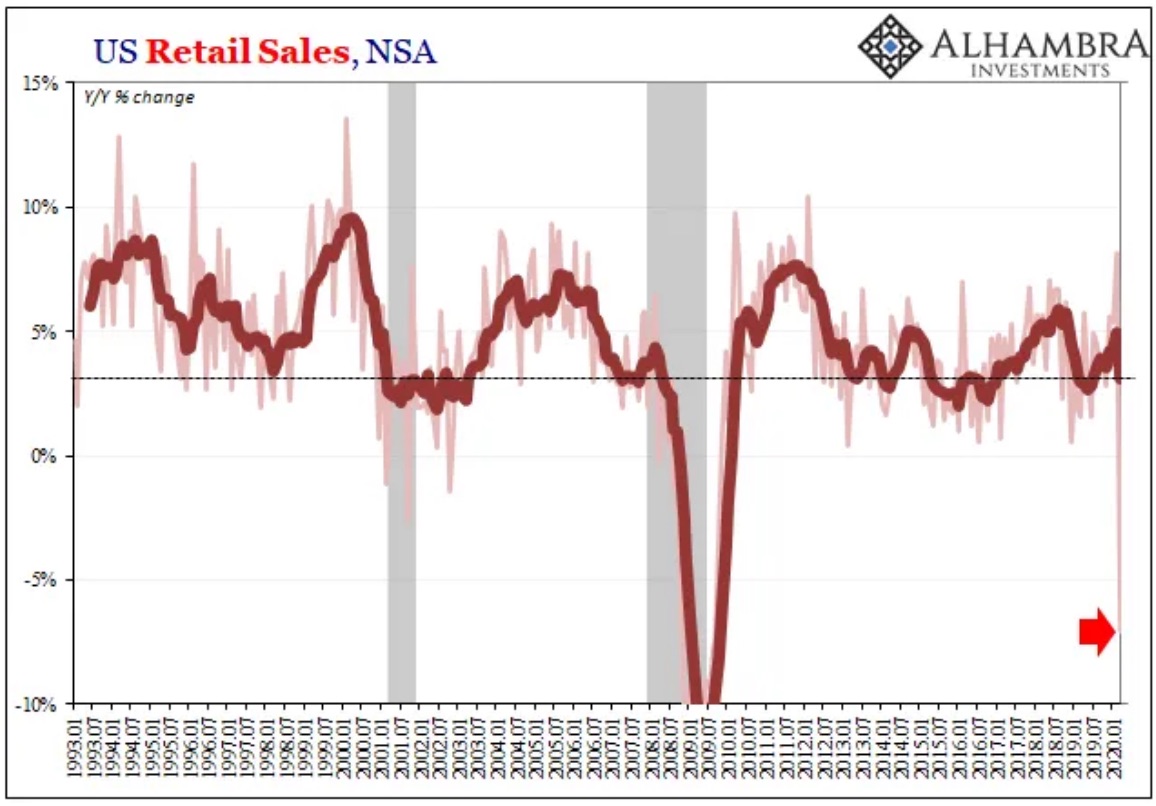 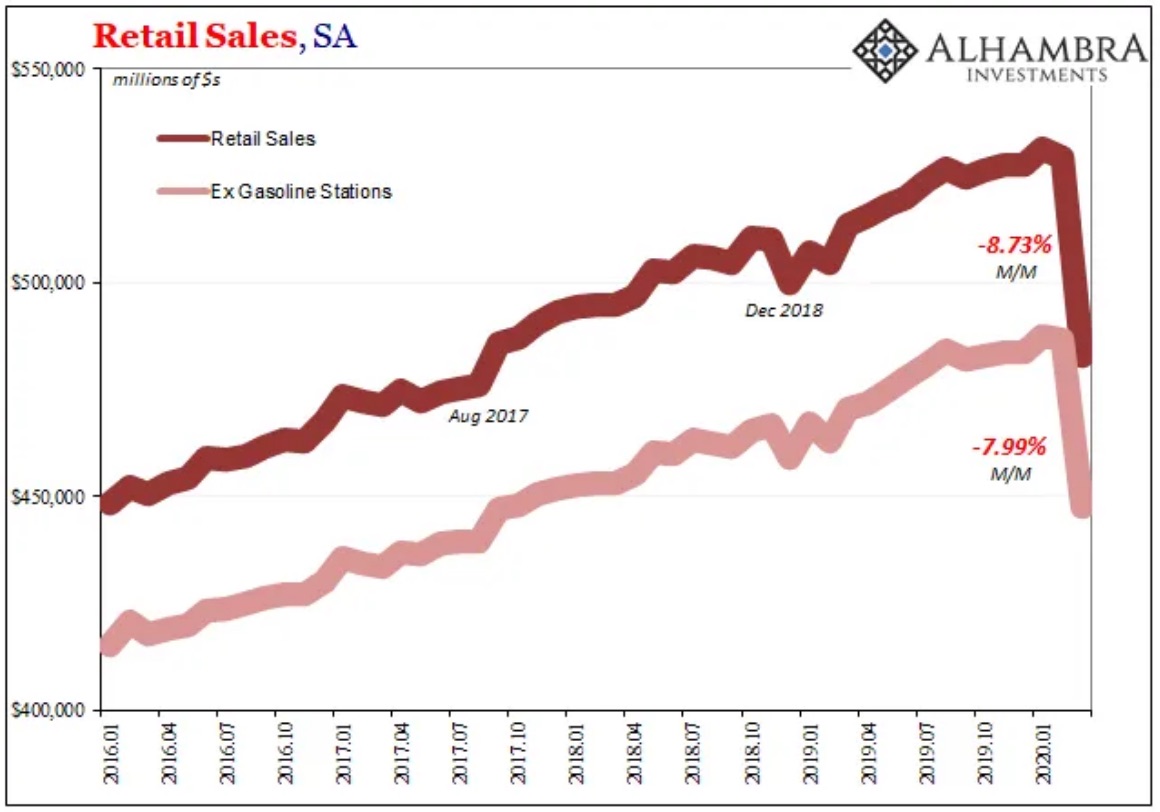 The underlying shock was actually worse. Much worse. Embedded within March’s figures was the fearful consumer unleashed upon the grocery department. Retail sales recorded at grocery stores didn’t just surge, they exploded upward.

The Census Bureau estimates that total purchases at these places reached $74.2 billion last month. This compared to $58.4 billion in February, an increase of 26.9% month-over-month. It is so far out of any historical let alone living experience, as you can plainly see here: 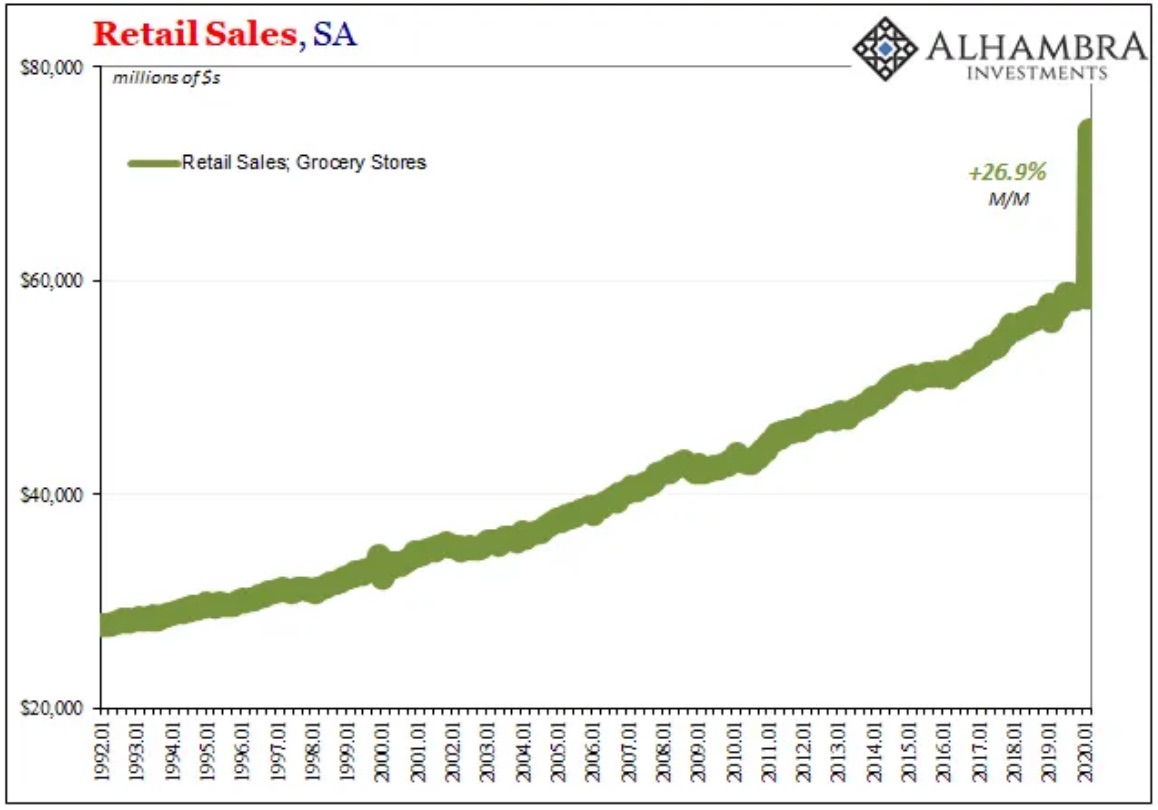 If we factor the Great TP Rush into our analysis by looking at Retail Sales excluding grocery stores, the shock rings up as near-total. Way beyond the worst of the worst of 2008-09.

Ex-groceries, retail sales plummeted by more than 13% in the one month alone. In all of the Great “Recession”, from November 2007 to the bottom in March 2009, the level of retail sales (ex groceries) declined by about 14.6%. It has taken just the first month of GFC2 to reduce what had taken 16 months during GFC1. 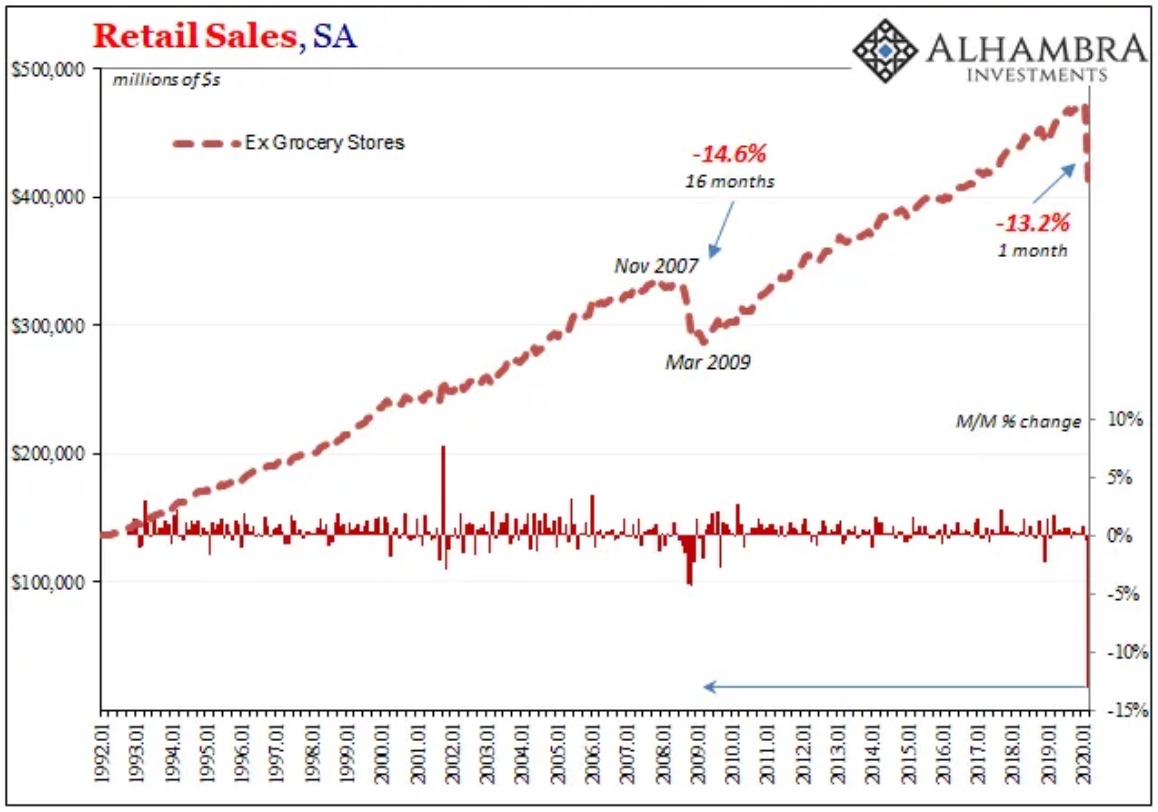 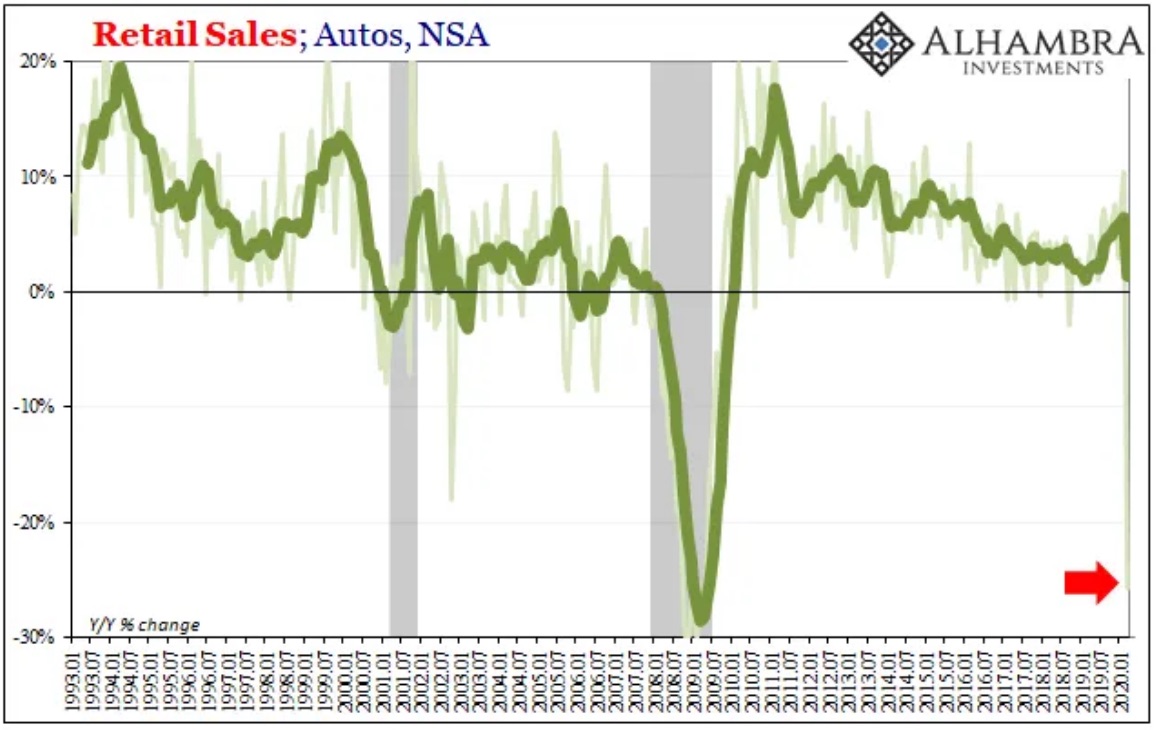 One big reason for this was retail sales in the auto sector, as one-quarter of them vanished in March (compared to the prior March). A decline of just over 25% year-over-year spells big trouble for an already beleaguered sector.

While the Census Bureau had retail sales rebounding in the latter half of 2019, the Bureau of Economic Analysis had total auto sales falling. The former counts the dollar value of everything sold while the latter only figures the number of units. Thus, Americans had been paying more for vehicles – almost certainly because of lower rates which lowered payments – and therefore buying fewer of them.

That may have pleased Jay Powell and his group at the FOMC, though in reality it was another one of these troubling indications of a weak fundamental starting economic case. Industrial Production estimates also released today, this one from the Federal Reserve, match the view from consumer spending and retail sales. 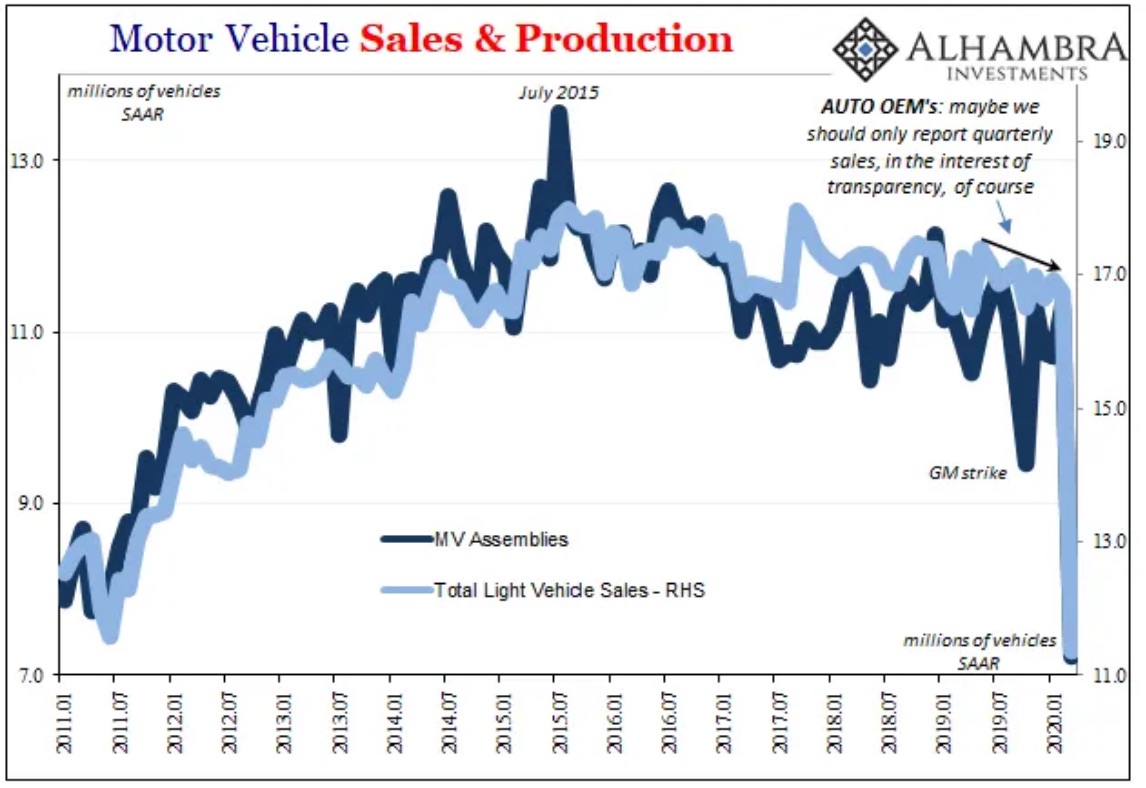 Motor Vehicle Assemblies, the Fed’s accounting of domestic auto production within the IP series, crashed by 33% year-over-year in March. This was pretty near equal to the BEA’s estimate of light vehicle sales dropping by 34%. Shutdown, yes, but a little something more to the downside. Maybe a lot.

It is big ticket items like these which are hardest hit in the worst economic contractions -for intuitive reasons. Americans fearful about their jobs are going to put off, perhaps indefinitely, such purchases that impact their longer-term situation. Another or larger vehicle payment, no matter the interest rate, isn’t high on anyone’s list who’s thinking about pay cuts, hour cuts, or the unemployment line (which, as noted yesterday, is at least six in ten Americans, and maybe nine out of ten).

So, it is a combination of not being able to go to the dealer to buy a vehicle that many want, but also, I believe, the beginning of demand destruction; those who would’ve purchased a car/truck but now won’t even when the stay-at-home guidance is lifted.

In large part because of autos, total IP fell 5.5% month-over-month in March; manufacturing was down 6.4%. 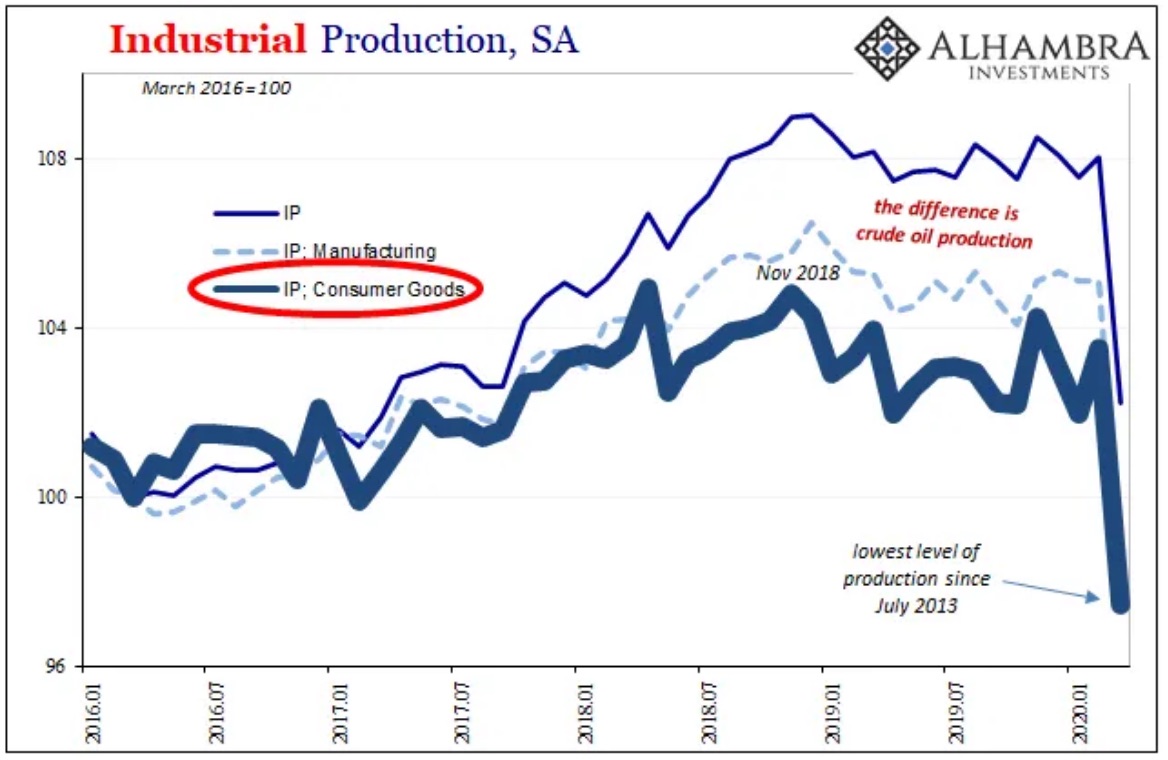 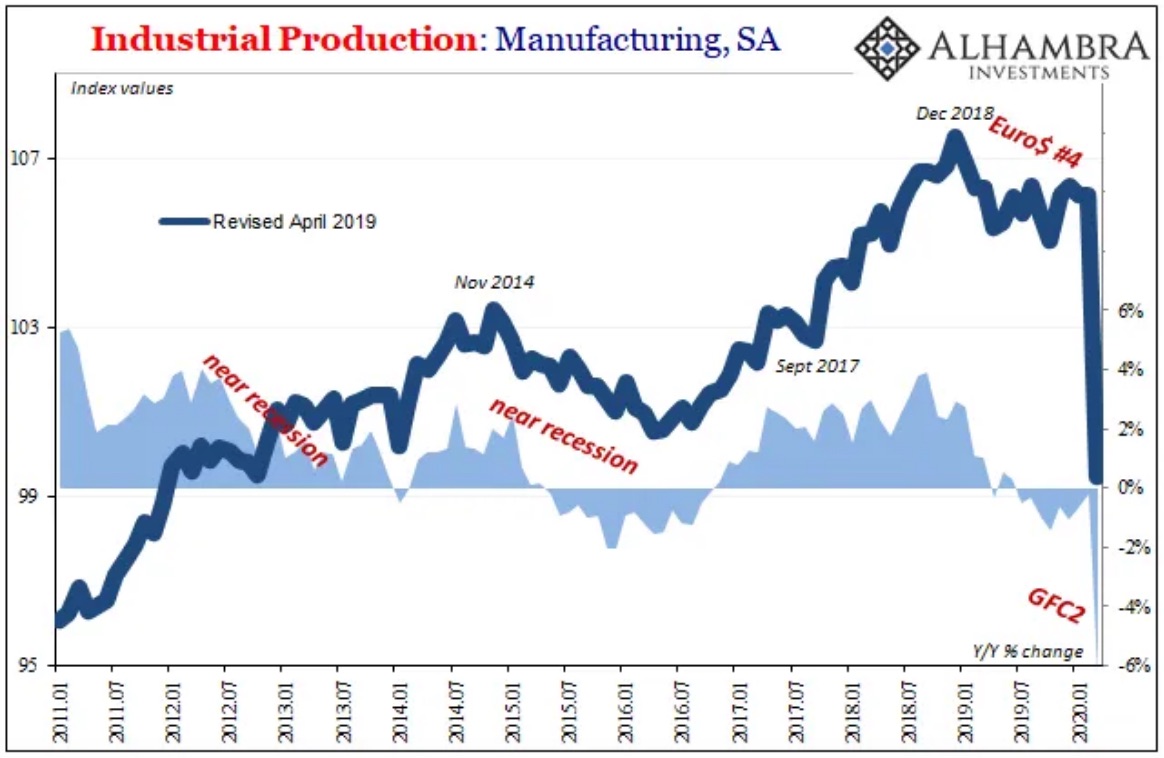 You can see here how at the very least a manufacturing recession had been underway for over a year before this current shock. Total manufacturing, despite what must be tremendous demand from grocery retailers (and department stores) to restock empty shelves, cratered to a level not seen since 2011.

And there are only indications it gets worse from here – beginning with oil production. According to the Fed’s IP estimates, the level of crude oil “mining” might still be at or just near its peak. This had accounted for the extra upside in overall IP as compared to manufacturing or the production of consumer goods.

Given the state of the energy sector and not just in the short run, long run curves pointing to sub-$40 oil far into the future, the shale patch isn’t going to be contributing to either IP or the overall economic situation going forward. It is about to subtract and likely a whole lot, probably substantially more than taken out by Euro$ #3. 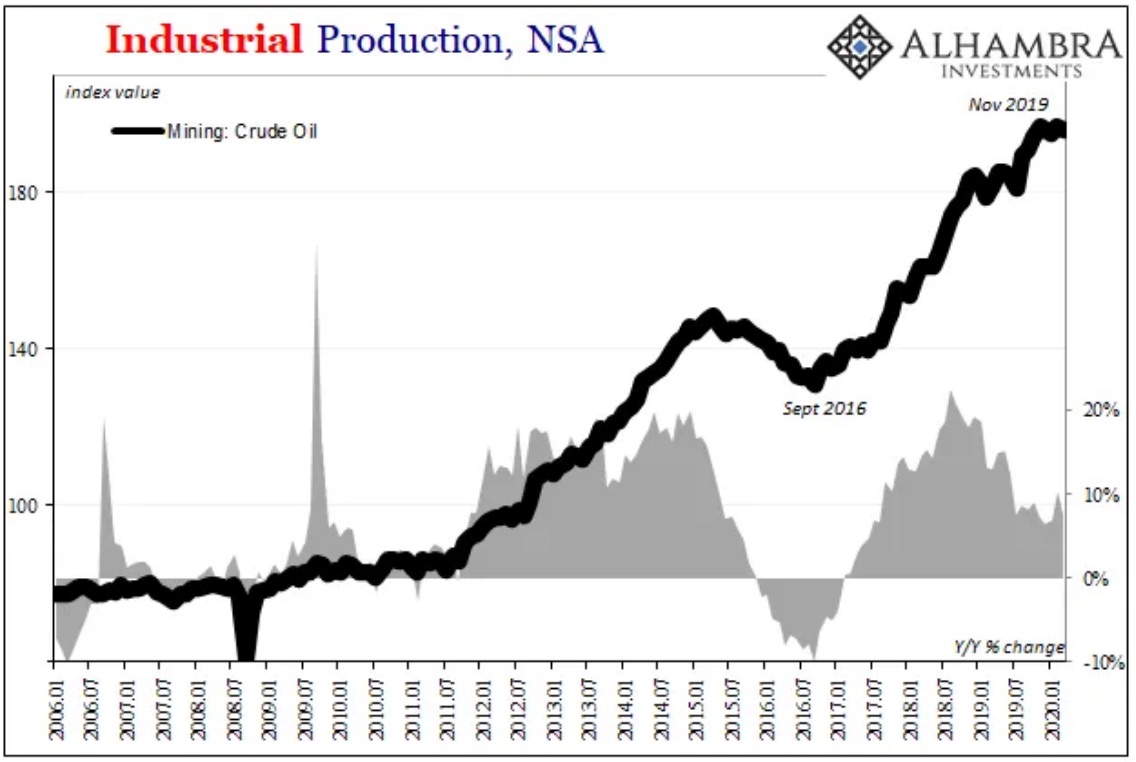 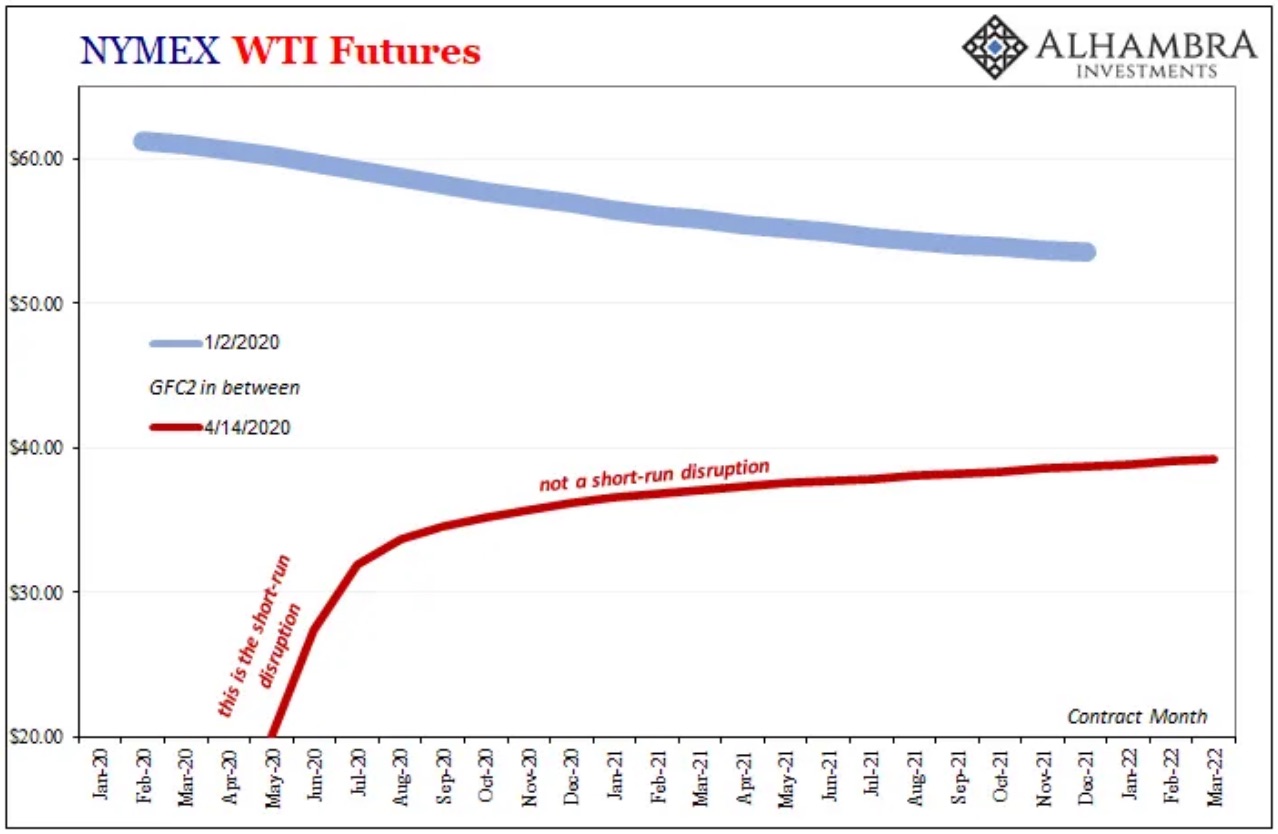 A lot people, especially those dip buyers at the NYSE, seem to be thinking sharp but short; as in, the non-economic shock of the shutdown produces a massive dislocation though one which dissipates quickly. Because it is non-economic in nature, short means right back to normal as quickly if not more so.

Every penny that would’ve been spent outside the grocery store in March (and April) it is assumed will get spent eventually. Thus, while factories are shutdown during it, they open back up and have to run at full steam or greater just to make up for what would be only lost time.

It’s wishful thinking rather than rational analysis. There are already signs of demand destruction in just the first month of data; the worst short run case with more short run destruction still be unveiled (how many more millions of jobless claims just this week?)

Therefore, when the dislocation ends there definitely will be a surge, a rush of spending as consumers who put off purchases make up for them. But it won’t be completely made up, and, from where I sit, it’s not likely to get back to anything like the near-recession level that we started from. We’d be lucky to get back to something like a near-recession.

And we haven’t even gotten through April. 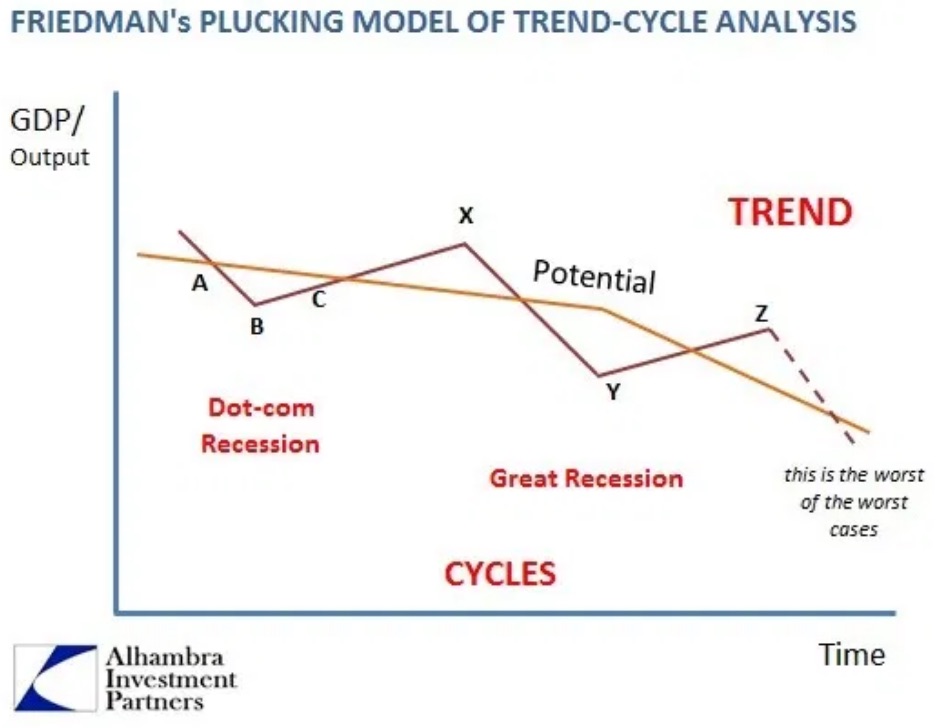 To listen to Egon von Greyerz discuss the market chaos and what to expect next click here or on the image below.