Today the man who has become legendary for his predictions on QE and historic moves in currencies and metals said that as the US election looms, the real price people are paying for gold is shocking.

November 1 (King World News) – Egon von Greyerz:  The US election is only days away. Both candidates have totally avoided the critical issue that will bring the US down in the next four years. The election campaign has been ugly but totally avoided the monumental problem facing the American people.

Clearly neither of them wanted to tell the voters that he will take over the running of a totally bankrupt country that is likely to collapse economically, financially and morally in the next four years.

At the end of this article I have set out the winning election manifesto.

A PRESIDENTIAL CANDIDATE NEVER TELLS THE TRUTH
Neither Trump, nor Biden is telling the American people that the US is a totally bankrupt country that has been running deficits for 90 years. (Four small exceptions in the 1940s and 50s. The Clinton surpluses were fake.)

What an unenviable task to preside over an insolvent nation and be hated by everyone as the country falls into perdition.

How can anyone be willing to run a nation that needs to borrow half of its budget expenditure. The clear facts are on the table. You cannot erase 90 years of mismanagement…

The figures tell us the truth. In fiscal 2020 spending was $6.6 trillion and tax revenue $3.4t. So the deficit was a staggering $3.2t. And as history shows us, it can only get worse. The state of the financial system, exacerbated by Covid, guarantees galloping deficits from here.

US DEBT – MORE THAN $40 TRILLION IN JAN 2025
The US federal debt by the time the new president takes over will be at least $28t. This was totally predictable based on a simple extrapolation as in my article from Feb 2018. In the  same article I predicted that the debt when the next president takes over in Jan 2025 would be $40 trillion. See graph below. I was probably much too cautious since the way things are going now $40 trillion seems too low. 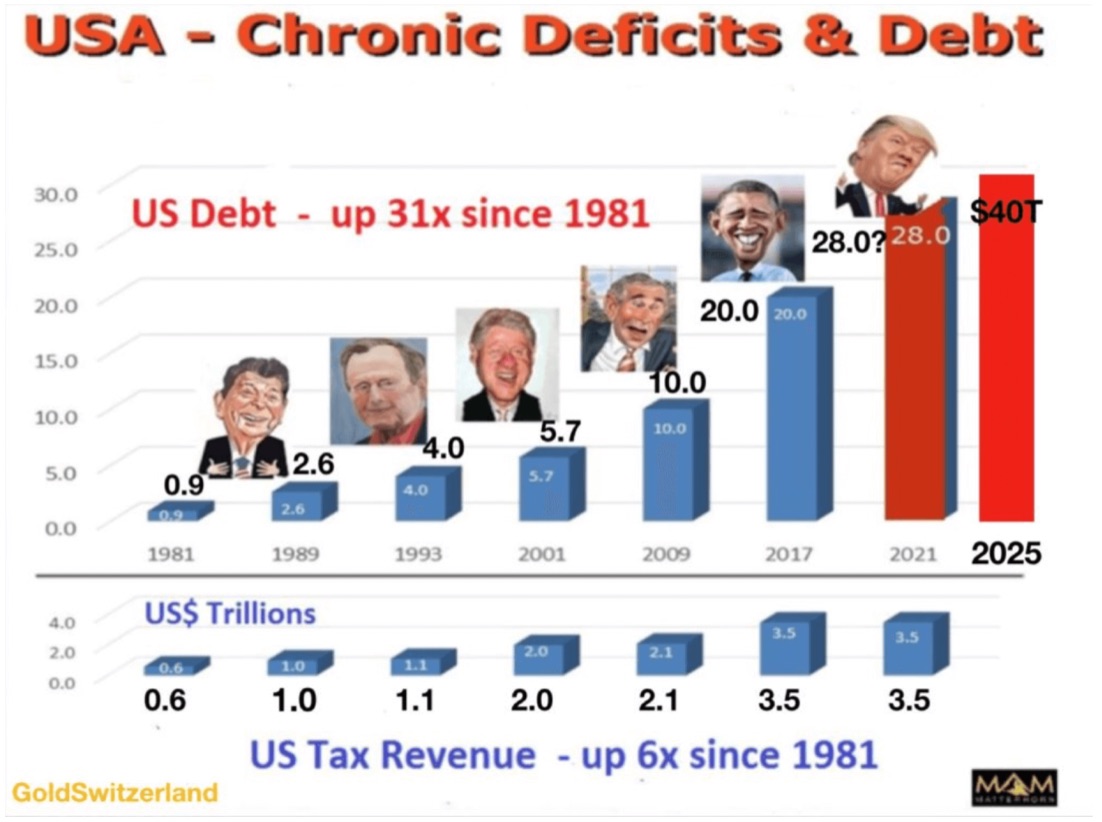 So why hasn’t either candidate told the truth and laid out the facts that the US will need to borrow more than the total tax revenue to pay trillions in Medicare, Social Security, Defence, etc.

DOLLAR HAS FALLEN 98%
And why is neither candidate telling the people that the consequences of a 90 year deficit policy has led to a 98% fall in the value of the dollar, in real terms, which is against gold.

Virtually every president in history has boasted about the strong dollar but no one has told the American people that the dollar is hardly worth the paper it is written on. And neither candidate has told the voters that in the next few years unlimited money printing will be required in a futile attempt to save the US economy and the nation from total destruction.

Whatever the Keynesians or the MMT crowd say, you can NEVER reach prosperity by printing worthless pieces of paper or pressing a computer button. If these theories were valid, the world could stop working and just print, print, print.

GOLD TELLS THE TRUTH
Only gold reveals what is happing to the value of fiat money. But not even gold shows the true situation since the massive amount of paper gold outstanding disguises the true price of gold. But the paper gold market is likely to fail within the next few years as debt explodes and the value of fiat money implodes. Because it is the accelerated money printing that will lead to the destruction of the dollar and all paper currencies.

The current gold price is not even reflecting the money printing and credit creation that we have seen so far. The graph below shows that in relation to US money supply, gold today is as cheap as it was in 1970 when the gold price was $35 or in 2000 when gold was $288.

SHOCKING: The Real Price Investors
Are Paying For Gold 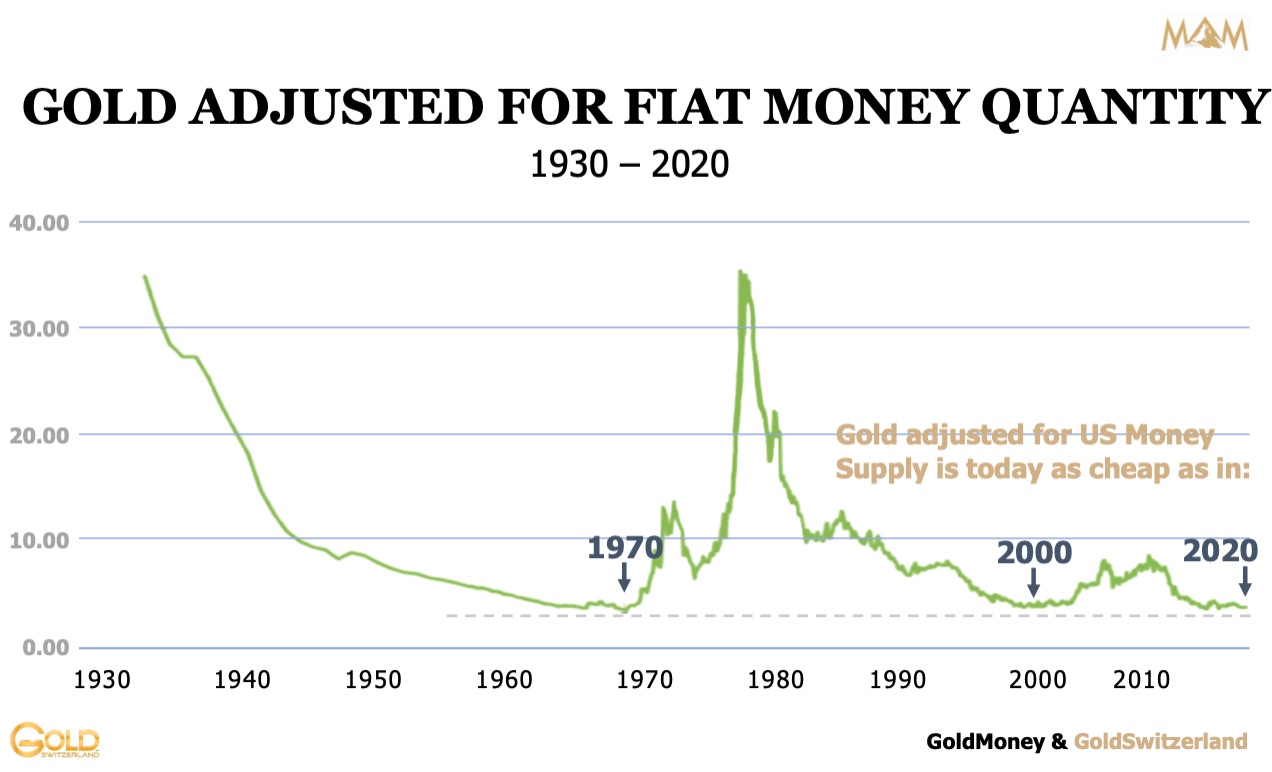 With the expected and required explosion in money supply in the next four years, gold will rise exponentially from here.

IMPORTANT BUT NOT URGENT
In his 7 Habits book, Steven Covey told us to focus on the square prioritising matters which are IMPORTANT but NOT URGENT. Sadly most of people and especially the politicians and the media focus on the wrong square which says URGENT but NOT IMPORTANT.

It is in this latter square that today’s instant gratification world spends most of its energy and time. That includes answering a Text message when you are in an important conversation with someone or always giving a mobile phone incoming call priority over whoever you are with.

Many business leaders tend to fight short term emergencies instead of planning for the long term strategy and prosperity of the business.

UK SPENT 3 1/2 YEARS SQUABBLING OVER BREXIT
Politicians are of course the worst. They seem to go from one crisis to another in their fight for survival. In the UK, the people decided in 2016 to exit the EU. Parliament, big business and the media could not accept the outcome. Nor could the Remainers who lost the vote. Not until Boris Johnson became Prime Minister in July 2019 and subsequently won an unassailable majority in Parliament, could Brexit finally be implemented.

Before that, the UK spent 3 1/2 years debating Brexit and nothing else. The fact that the UK economy was quickly deteriorating, the government did not have time to focus on. Nor did the media which tried everything to sabotage Brexit.

So the UK spent all this time in the wrong square, just squabbling about Brexit as the walls of Jericho were tumbling around them.

FOUR YEARS OF SABOTAGING TRUMP
And exactly the same is happening in the biggest economy in the world. Since Trump was elected 4 years ago, the opposition and the media have totally focused on getting him out of office with any kind of dirty tricks including Russian connections and impeachment.

So for Trump, there have been 4 years of fighting all kinds of imaginary windmills (Don Quijote). These were windmills erected by his enemies to prevent him to deal with the important and urgent matters like a faltering economy that can only survive on printed money and debt.

But a politician who is elected for only 4 years must, in any case, after the first 18 months, focus on how to buy votes for the coming election. And the people demands instant gratification and not the hardship necessary to put the economy right.

A DESPERATE PLEA FROM THE PRESIDENTIAL CANDIDATE
And that is why neither candidate has ever dared to conduct a serious discussion about the fact that the US is bankrupt. Who would vote for a candidate with the following manifesto:

“Our nation is bankrupt. We cannot make ends meet and we need to eliminate Medicare/Medicaid, Social Security and Defence totally to balance the budget. That will save us $3 trillion which almost covers the 2020 deficit.

The problem is that we expect a bigger deficit next year. Covid is paralysing major parts of the country and will be very costly. It will also have permanent negative effects. In addition, we expect major problems in the insolvent financial system. This will necessitate the printing of further trillions of dollars or even tens of trillions.

But as we print these dollars, we get an ever bigger problem. The value of the dollar will fall precipitously and we will need to print and borrow even more. That will create a vicious circle with a lower dollar, bigger deficits and bigger debts plus inflation.

So these are the facts. I am obviously very sorry to present these to you but I am certain that there can be no other outcome.

I sincerely hope that you will elect me on this platform. After all, I am the only presidential candidate in history who has told his people the truth and the real state of the nation.

And please don’t believe the fake promises of the other candidate. A liar doesn’t deserve to be president.

Finally, I promise to do my best to manage the coming disorderly collapse of the USA to the best of my ability.”

INTERNATIONAL PRECIOUS METALS SHOW
Gerald Celente, Marc Faber,  Rick Rule and Egon von Greyerz will all be speaking at this Show in Munich on November 6 & 7. This is a virtual event with recorded presentations.  https://www.edelmetallmesse.com/en/

HIS GREATEST INTERVIEW EVER: Sean Boyd predicts $3,000 gold and shares with KWN listeners around the world the big game-changer in the gold market in his greatest interview ever. To listen CLICK HERE OR ON THE IMAGE BELOW.

Silver Breaking Out As Gold And Silver Have Seen Their Bottom