Today the man who has become legendary for his predictions on QE and historic moves in currencies and metals told King World News that a global financial fire is coming and investors must get prepared now.

May 16 (King World News) – Egon von Greyerz at Matterhorn Asset Management (based in Switzerland):  What Heraclitus meant was that the world is in a constant state of flux. He explained it further by stating that “No man ever steps in the same river twice, for it is not the same river and he is not the same man.”

So even though the world is in a constant state of change, history still rhymes even though it doesn’t repeat itself.

I have, in many articles and interviews, pointed out how predictable events are (and people). This is particularly true in the world economy. Empires come and go, economies boom and bust and new currencies come and without fail always go. All this happens with regularity.

A GLOBAL FIRE IS COMING
But at certain times in history, everything really needs to catch fire. And that is where the world is now.

Explosive fires have started everywhere already. Stock markets are on fire and so are property markets, as well as bond and debt markets. On fire in this case means that these markets are all going parabolically exponential or should it be exponentially parabolic!

We are now at the end of the secular bull market in the world economy which on a global level has reached extremes never seen before in history. Never before has the world seen an explosive fire of this magnitude, fuelled by uber-profligate money printing and credit expansion by central and commercial banks…

We have talked about inflation running wild and it is not just happening in stocks. Property markets are literarily exploding, especially the high end. We see this all over the world and not just in the US. In the UK for example, HSBC stated that March saw the highest number of mortgages EVER issued. In Sweden properties sell for up to 40% above asking price in a frenzied bidding war and second hand leisure boats are in such demand that they cost virtually the same as a new boat. And if you want a new boat, there is none available until 2022. It also seems that people are desperate for company after the lockdowns as prices for puppies in the UK are 50-100% higher than last year.

Yes, everything is really on fire as people are desperate to just spend, spend, spend after a year of lockdowns and restrictions.

AN ECONOMIC BUBBLE OF AIR
But explosive fires always end in everything burning down or imploding eventually. And this is just what is going to happen in the next few years. A massive forest fire is not just totally inevitable but is also an absolute necessity. Because economic bubbles consist primarily of air and lots of it.

When empires or countries run out of money, all they have to replace it is air to keep the economy going. The air consists of false promises combined with lots of air in the form of fake money.

Since air is free, governments can produce unlimited amounts of it. And without exception, gullible people want to believe that it is actually real money and not just empty air.  The beauty for the government is that they can just produce and borrow trillions of dollars at ZERO cost. And by manipulating interest rates they can borrow this money also at virtually ZERO cost.

Just look at how for example the Dow has gone up exponentially and parabolically in the last year in an historically unprecedented straight line. 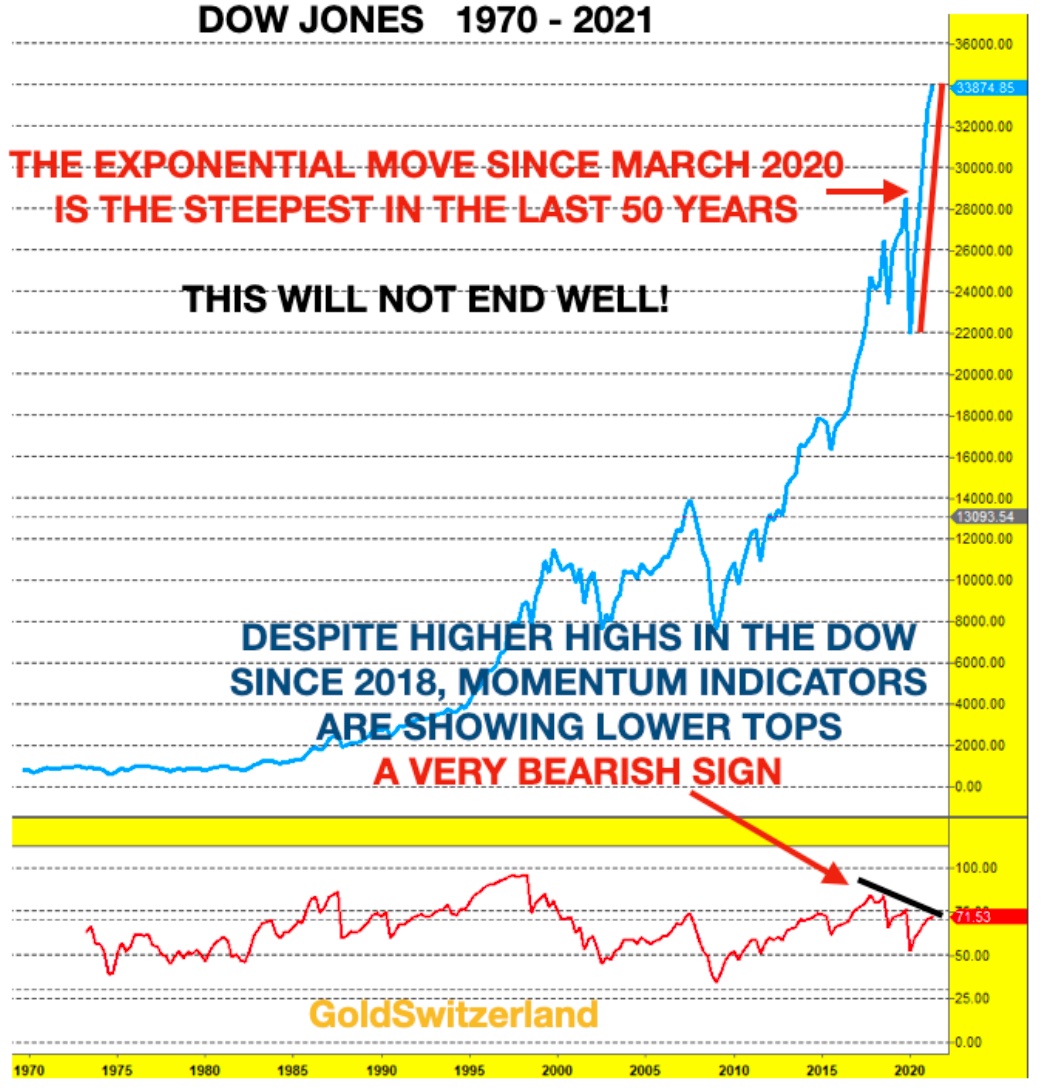 THE US IS BANKRUPT
But let’s face it, the US is totally bankrupt. With less than a handfull of annual exceptions, US federal debt has gone up every year since the early 1930s. So here we have the biggest economy in the world which can only hold on to this position by printing itself to a false prosperity at an ever faster pace.

Just look at the chart further down the article to understand what a government can create out of thin air.

After the Gold window was closed in 1971, US federal and total debt as well as money supply has gone Exponentially Parabolic and the dollar, the world’s reserve currency, has lost 98%.

US Federal Debt up 74X

But like all exponential curves of a big sample, this one will end in tears. Bubbles are called bubbles because they consist of air. And when bubbles become too big, they ALWAYS and without fail burst and implode. And this is what the US economy as well as the rest of the world can expect next.

Fundamentally, US and global stocks are massively overvalued. But we know that overvaluations can last longer than we expect, especially when you are talking about the end of a very long super-cycle which could be 300 years old or even 2,000 years.

Technically markets are giving very clear signals that THE END IS NIGH. Whether that means days, weeks, or a few months, is totally irrelevant. We know that we are at the end of the most remarkable period in history in regards to money, investments and the economy.

Also socially, morally and politically we are reaching a low point in history.

THE WORLD NEEDS A BIG FIRE
So back to the fire. We really need a proper and very big forest fire that gets rid of all the excesses, be they financial or social. Only then will the world again create new green shoots, free from debt and false values, both moral and financial.

But before that, the implosion of most debt and asset values will create a very difficult period of transition for the world. It could last one decade or several. How long it will actually last, only future historians can tell us.

There will be major suffering around the world which will not just be financial but also social. We will see wars, civil wars, famine, disease and migration. But there will be virtually no money for social security or aid of any kind. Nor will there be any pensions and very limited Medicare.

We know that cycles are part of life. And some cycles are more extreme than others. What has made this one worse than the world has ever experienced is that governments and central banks have interfered with the natural cycle of ebb and flow.

Gordon Brown, the UK Chancellor of the Exchequer (Finance Minister) famously stated in 1999 that he had abolished “Boom and Bust”. A few months later, stocks and the economy crashed.

This fatal interference in the natural cycles, especially by the US, will be very costly for the world as I have outlined above. By foolishly trying to abolish cycles, governments have exacerbated the problem to a degree that will create unnecessary suffering for the world.

The most important remedy in a crisis is family and friends. That is one of the advantages of difficult times that people support each other rather than just chase material values. And in addition to family and close friends, there are so many wonderful things in life that are virtually free like nature, music and books. We will find that past times are much more fulfilling than our iPads or Netflix.

GOLD, SILVER AND WEALTH PRESERVATION
With regards to securing your finances in periods of crisis, gold and silver have always been critical to hold.

Everyone can afford some gold or silver. An ounce of silver is $30 and one gramme of gold is $60. So saving in precious metals will not be very useful but essential at whatever level you can afford.

For bigger investors, physical gold and silver will be one of the few ways to avoid a total destruction of your wealth. As I have shown many times, gold is currently as cheap as it was in 1970 at $35, and 2000 at $290 in relation to US money supply.

THE DOW TO FALL 97% AGAINST GOLD
Stock investors have already seen a major destruction of their wealth since 2000 although most people are unaware. The Dow has lost 60% against gold since the year 2000. That trend will accelerate in the next few years and I expect the Dow/Gold ratio to reach the long term trend line as shown on the chart below. This means that the Dow will lose another 97% from here against gold. 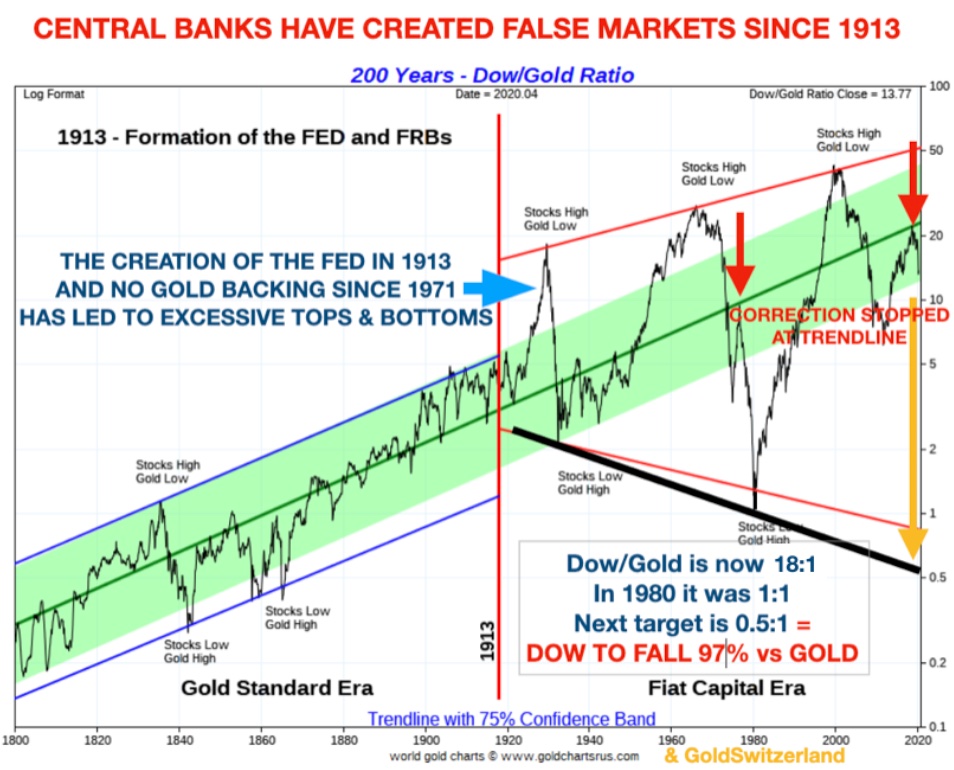 Gold and silver have not at all reflected the massive creation of money in the last 50 years. That catchup phase is likely to start very soon based on both fundamentals and technicals. The upside potential for gold and silver is multiples of the current prices that is at today’s price levels. Hyperinflation could take the metals to unfathomable heights.

But holding physical gold should not be seen as a speculative investment. Instead, it should be seen as the best protection against the coming destruction of paper assets and the imminent disorder in the financial system…This will link you directly to more fantastic articles from Egon von Greyerz CLICK HERE.

***To listen to James Turk discuss the key breakout numbers for gold, silver and the mining stocks as well as where the prices of gold and silver are headed long-term CLICK HERE OR ON THE IMAGE BELOW.

Gold Mining Stocks Are About To Skyrocket