Sentiment Indicates Gold Very Close To Major Bottom
August 10 (King World News) – Fred Hickey:  Tonight’s gold Daily Sentiment Index (DSI) of 8 is lower than the early March 2021 DSI low (12) and just a smidge above the MAJOR August 2018 low of 6 (when gold was just $1,180). Theoretically, this extreme negative sentiment means we could be very close to putting in a bottom…

XAU vs Gold
Graddhy out of Sweden:  During volatile times we should not forget this long standing, ultimate long term chart showing pm miners vs gold. It is backtesting blue line. This ratio chart is rising in a pm bull and I am expecting it to make new ATHs during this pm bull market.

US Households
The Daily Shot:  US households’ financial distress is at record lows due to increased cash balances, mortgage forbearance programs, and perpetual student-debt freeze. 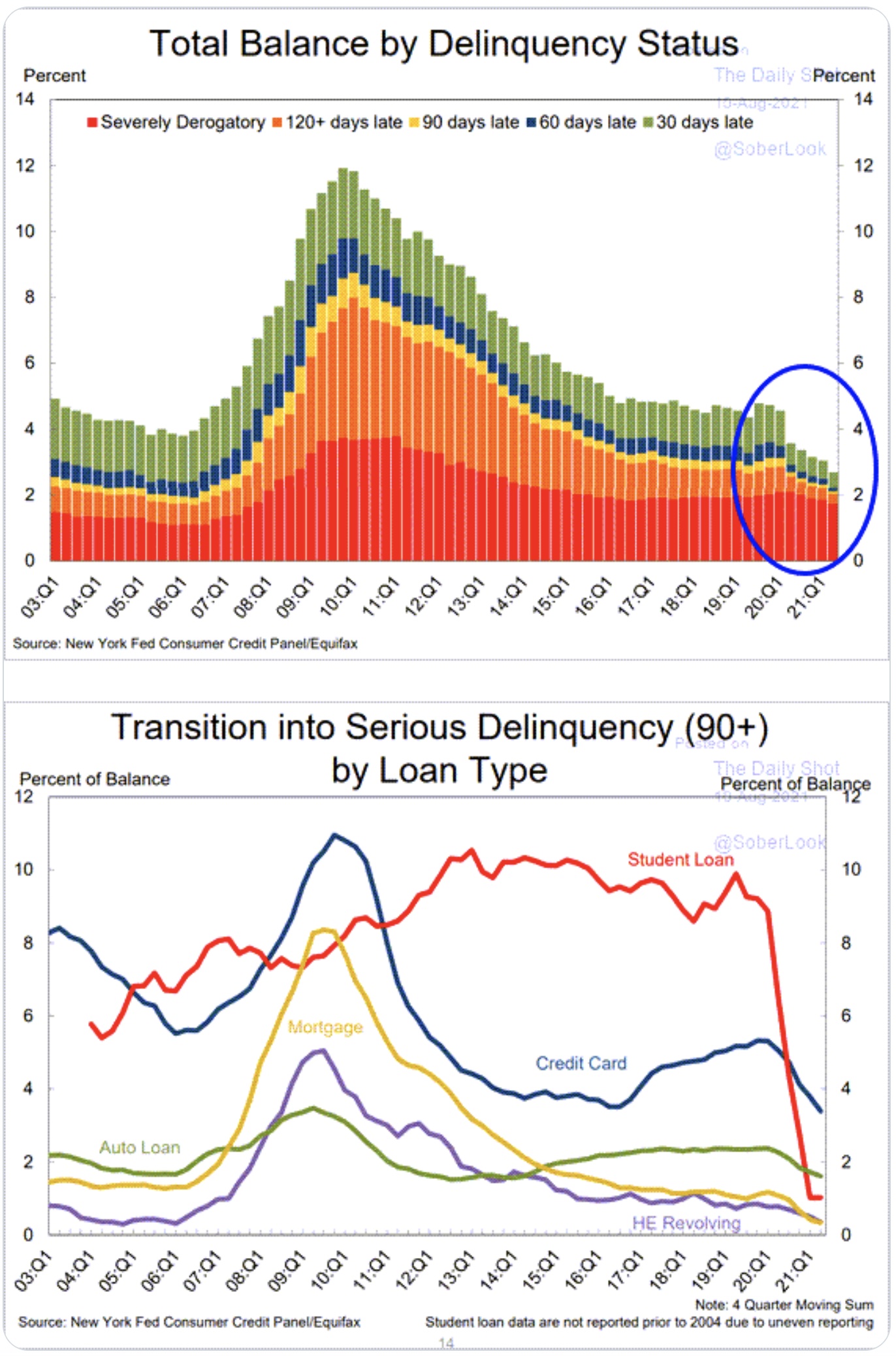 Inflation
Peter Boockvar:  Yesterday the NY Fed released its July monthly consumer expectations survey. The median one year inflation prediction held at 4.8%, the highest in the 8 yr history of this survey and the 3 yr viewpoint rose one tenth to 3.7%, the highest since August 2013. The longer the former stays elevated, the more the latter will rise. Expectations for home price gains remains aggressive at 6% but that is down slightly from 6.2% in June. Rent will be an important component of tomorrow’s CPI and rent expectations were up by 9.8%.

Worse Off Than A Year Ago
With respect to income, the median growth expectation fell by .1% to 2.9%, “but remains elevated at pre-pandemic levels seen during late 2018 and early 2019.” So, unfortunately, we have expectations for inflation higher than those for income. It is why I say again that we won’t have healthy growth and maximum employment UNLESS we have stable prices because falling real wages is a growth depressant. To this, the NY Fed said “Perceptions about households’ current financial situations compared to a year ago deteriorated slightly in July, with more respondents reporting being financially worse off than they were a year ago. Respondents were also more pessimistic about their households’ financial situations in the year ahead, with fewer respondents expecting their financial situation to improve a year from now.”

Lastly, because of the large amount of job openings, “The mean perceived probability of finding a job (if one’s current job was lost) rose sharply to 57% from 54.2% in June, the 4th consecutive m/o/m increase and the highest level since February 2020. The increase was broad based across income groups and most pronounced among respondents with no more than a high school degree.”

The NFIB July small business optimism index fell to 99.7 from 102.5 and basically gave back the 2.9 pt increase in June. The average year to date is now 98.7. I mentioned yesterday the record high number of Positions Not Able to Fill and future Compensation Plans. Plans to Hire fell 1 pt but off the June record high dating back to 1974. The current Compensation Index was down 1 pt too but also off a record high. Expectations for Higher Selling Prices fell 1 pt but off the highest level in 40 years. “Of those who raised compensation (41%), 62% raised average selling prices. Among those who raised compensation ‘at lot’ (5%), 13% raised prices by 10% or more. That is a considerable amount of price pressure” said NFIB.

After falling by 2 pts last month, Increased Capital Spending plans rose 1 pt. Highlighting the shortages of just about everything, “A net 12% of owners view current inventory stocks as ‘too low’ in July, up one pt from June and a 48 yr record high reading.” Plans to increase inventory gave back last month’s 5 pt gain likely because they can’t get what they need.

Stagflation
… I’ll use the word ‘stagflation’ again to explain these data points. The NFIB chief economist said, “Small business owners are losing confidence in the strength of the economy and expect a slowdown in job creation.” Why? “As owners look for qualified workers, they are also reporting that supply chain disruptions are having an impact on their businesses. Ultimately, owners could sell more if they could acquire more supplies and inventories from their supply chains.” Covid worries too can’t be ignored. “The virus continues to create uncertainty about its impact on people and the response of government regulators.”

A stagflationary environment just makes the job of a central banker, the author of it, that much more challenging.