With interest rates spiking and the dollar surging, a major warning signal was just triggered that preceded the last collapse.

Major Danger Signal Just Triggered
From Jason Goepfert at SentimenTrader:  “Homebuilders are giddy. While their stocks have been flat for several years, company officials are the most optimistic since the housing bubble years. In the past 30 years, they have been this positive on their industry only three times, and two of those coincided with peaks in their stocks…

According to the National Association of Home Builders, a heavy majority of builders now consider broad-based conditions in their industry to be good. The current reading of 70 is the highest since 2005 and among the highest overall in survey’s 30-year history (see chart below). 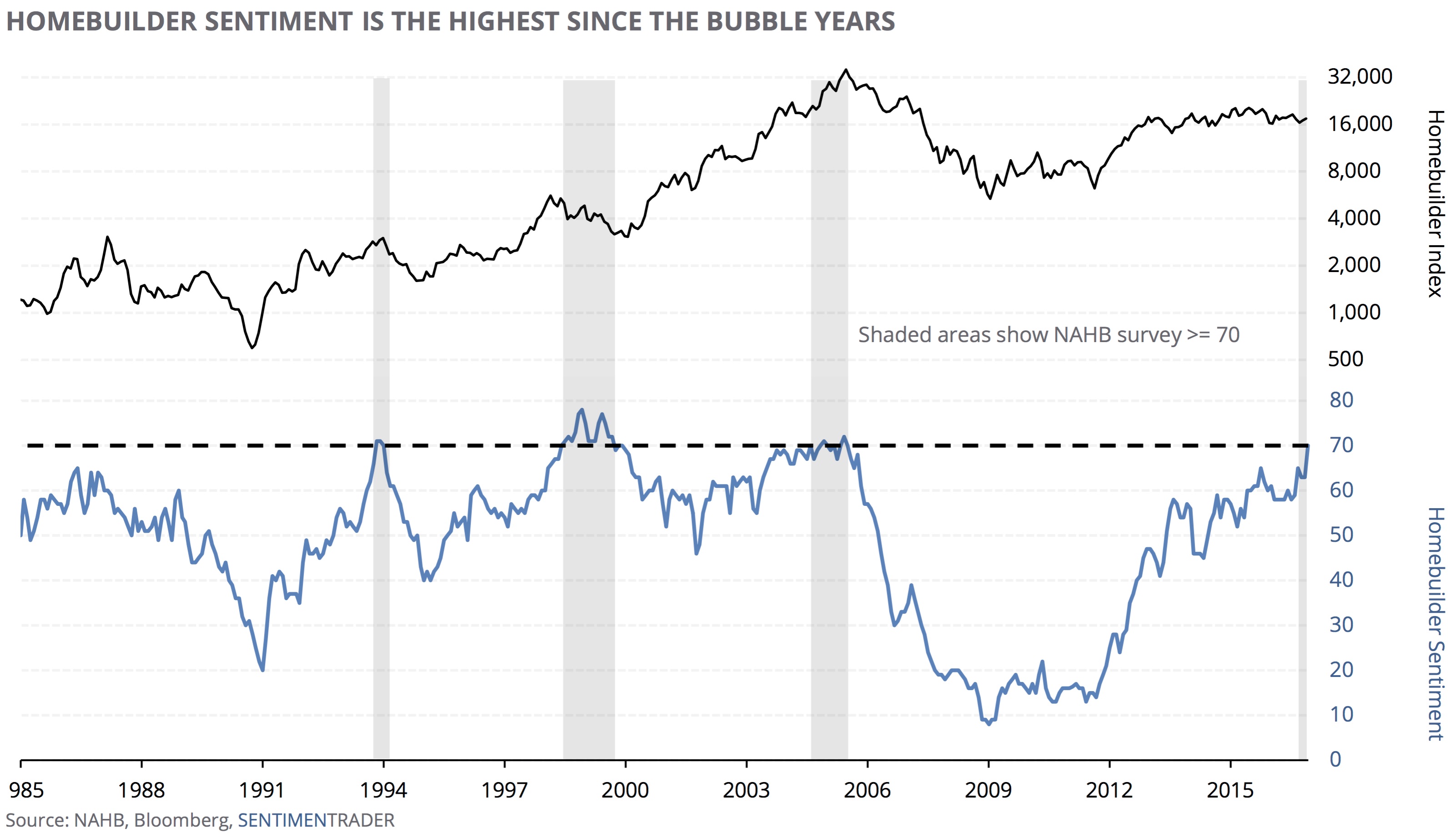 Sentiment has closely tracked builders’ stock prices. Below we show an equal-weighted index of 8 of the largest public homebuilders along with the NAHB survey. The table below shows the performance in the index after the survey first reached 70, and the tables on the next page show returns in the individual builders (see table showing large historic losses below following sentiment readings of 70).

When homebuilder sentiment had reached this extreme in 1993 and 1998, it coincided with a peak in most builders’ stocks. They declined about 25% over the next 9 months after those instances.

In the lead-up to the bursting of the housing bubble, such optimism among builders didn’t lead to a correction, like the two precedents at the time. Instead, builders went into hyperdrive as investors piled in, which proved to be the last gasp of the building bubble. If we would have waited to sell until the building stocks dropped below their 12-month moving average, it would have kept us in until the bubble burst.

On average, over the next two years, the builders added about 11% at their best point but lost more than 40% at their worst point, a highly negatively skewed risk/reward ratio.

The odd thing about the current bout of optimism is that most of the homebuilding stocks have been flat for the past three years, until the prior dates when the stocks had rallied strongly. That could be seen as either a good sign (they have room to run) or a bad sign (the optimism is unwarranted) depending on your preconceived notions.

We’d stick with the typical reaction following such optimism – declining prices, especially if the builders’ stocks drop and remain below their long-term averages.

King World News note:  Jason Goepfert is the best in the world at what he does, which is delivering actionable data.  The charts and commentary above are from SentimenTrader. To try a free 14-day trial of the internationally acclaimed work that Jason Goepfert produces at SentimenTrader simply CLICK HERE.