Today one of the greats in the business noted, “When sentiment gets this bad, we are very close to a turning point.”

January 28 (King World News) – Alasdair MaCleod:  Gold and silver fell sharply this week in the wake of the release of the FOMC minutes, which were a wakeup call for financial markets. Gold fell $45 from last Friday’s close to trade at $1789 in Europe this morning, after touching $1854. Silver fell $1.80 over the same period to $22.55, and the gold/silver ratio is back up at 79.3 having been as low as 74.7 last week. 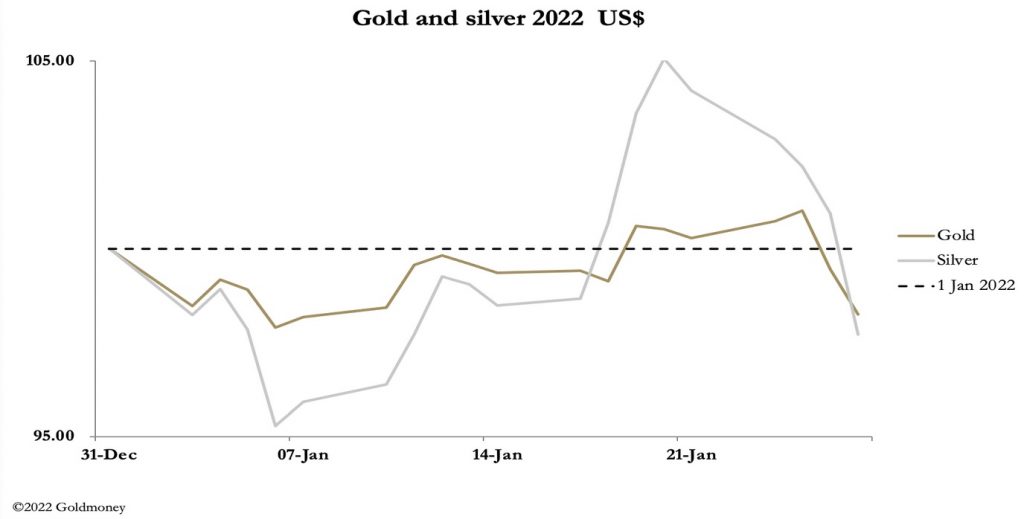 Our next chart, of the gold price, puts this move into context. 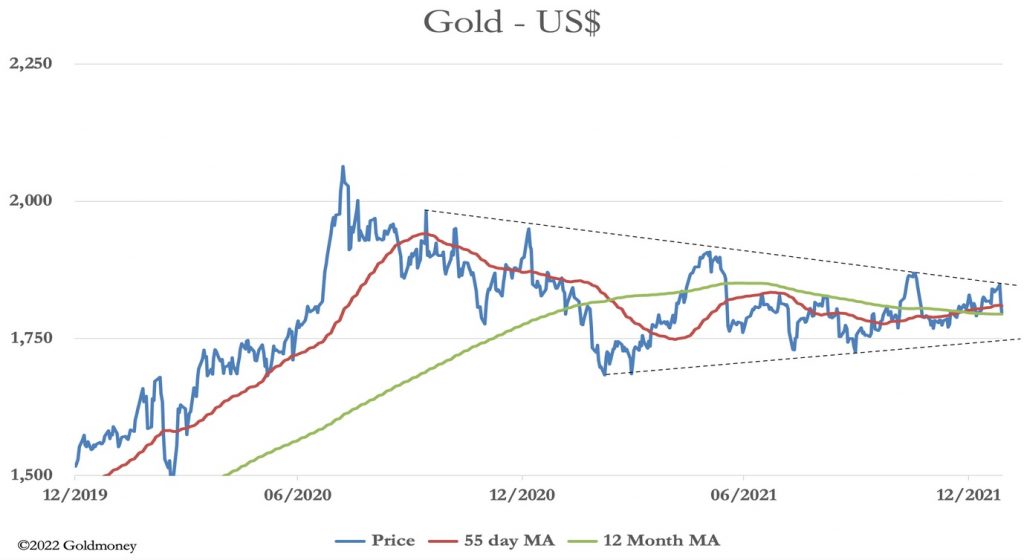 The price has been consolidating the previous bull run in a contracting triangle, whose upper boundary has been intact since November 2020, and the lower support since last March. The fall in price this week has respected the upper trendline.

Very Close To A Turning Point
It is the nature of these contracting triangles that the longer they persist the greater the move out of them. We must be getting close to that time, with the moving averages and the price all converging together. Sentiment seems to confirm the position, with weaker hands giving up on gold and silver, even accusing experienced commentators of misleading them. We know from experience that when sentiment gets this bad, we are very close to a turning point…

But technicals and sentiment do not make a complete argument. Fundamental factors also matter, and here we must turn to the FOMC minutes. It confirmed that “indicators of economic activity and employment continued to strengthen”, and Chairman Powell commented that “the economy no longer needed sustained levels of monetary policy support”. The following day, it was announced that fourth-quarter GDP increased at a 6.9% rate (admittedly on the back of inventory restocking) exceeding market expectations. Powell would have known this before the FOMC statement.

It has been a shock to complacent markets. The next chart is of the benchmark 10-year US Treasury yield. 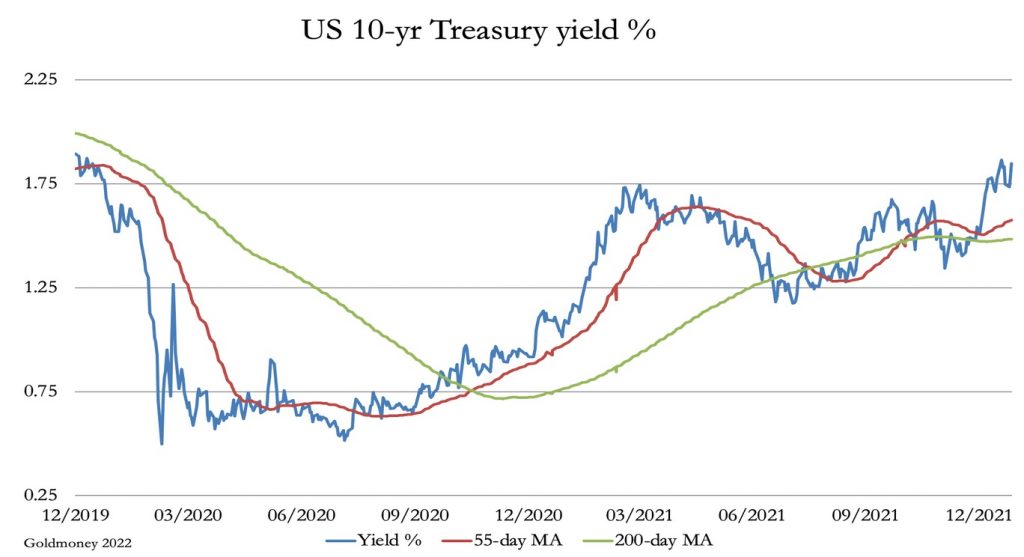 This chart is bearish for financial asset values, indicating further sharp rises in bond yields. And with the Fed funds rate anchored at 5 basis points, the yield on the 13-year T-bill has risen to 18.5 bp, another wake-up call for bullish investors. Being overwhelmingly Keynesian, these investors also believe that rising interest rates are bad for gold, which helps explain the fall in gold and silver prices. And appearing to back the argument, the dollar’s trade-weighted index is also rising. This is our next chart. 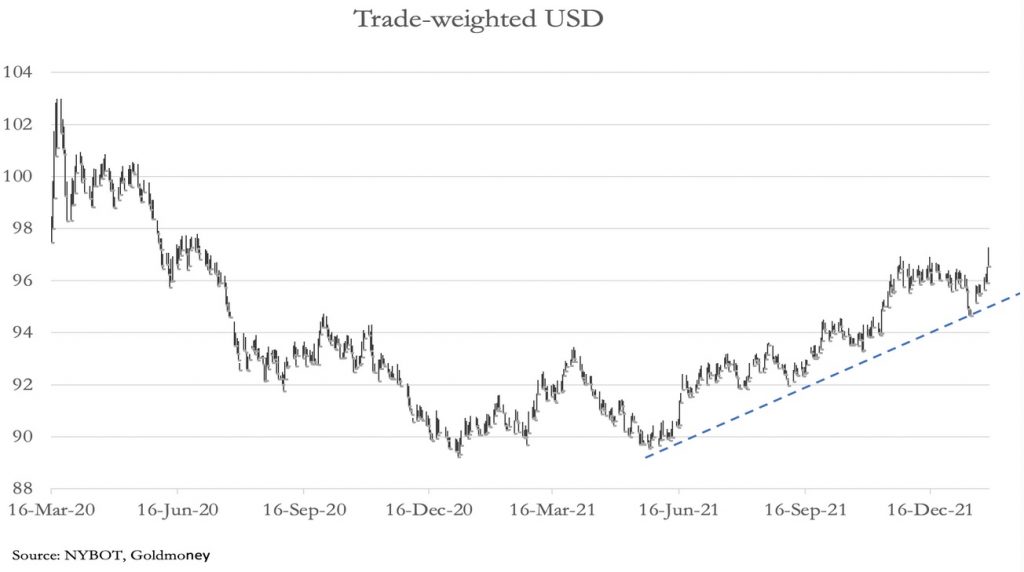 Fiat Money, Including The Dollar, Is Being Destroyed
Bad for gold? Well, no — because rather than dollar strength they reflect euro and yen weakness, two currencies whose interest rates remain trapped below the zero bound and whose central banks have not indicated an intention of raising rates. The dollar’s weakness is better reflected in a basket of commodities, next up. 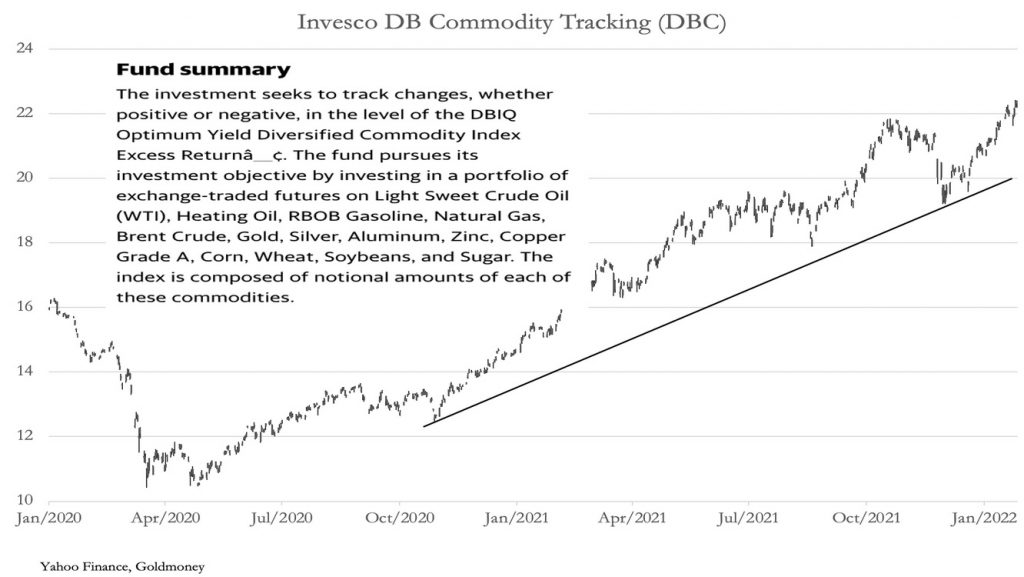 With the help of soaring energy prices, the dollar’s purchasing power continues to decline, which is underappreciated by the financial establishment, misunderstanding the purpose of interest rates. They are not the “cost” of money; they reflect the loss of a currency’s purchasing power. Understand that and the fact that historically both interest rates and the price of gold rise together is explained.