As we continue trading in what promises to be a wild October, here is a surprising look at the US dollar, commodities and gold.

Dollar Rebounds From Severe Selling Pressure
From Jason Goepfert at SentimenTrader:  The dollar has recovered. The U.S. dollar has rebounded strongly from severely oversold conditions, jumping more than 2.5% over the past month. This comes on the heels of a severe oversold condition over multiple time frames. Other times it showed a strong 1-month return following a 5% triple-time-frame decline, it led to more losses and was not a good signal that momentum had shifted. Commodities did better, though gold was about in line with random…

• The U.S. dollar has rebounded strongly from severely oversold conditions

• Other times it showed a strong 1-month return following a 5% triple-time-frame decline, it led to more losses

• Commodities did better, though gold was about in line with random

One of the markets that has received the most attention in recent weeks is the U.S. dollar. Analyst and money manager opinions vary wildly about the reasons for the dollar’s recent rise, or its potential impact on other markets like stocks and bonds.

The strongest and most consistent (but still far from perfect) correlation between the dollar and another market is commodities, so the buck’s rally has been a modest headwind for many of those contracts.

In a July report, we looked at the dollar’s decline over three different time frames. At the time, this triple-time-frame return had declined to -5%, which was the most extreme since 2010. For most markets, this would equate to a severely oversold reading and a higher probability of a rising market going forward. But currencies are a different beast and don’t react to factors like other markets. As we saw in that report, after other times the dollar had become so-called oversold, it suffered further losses over the next 1-3 months almost every time.

We can add this summer to the list of declines. But now it has started to turn up, thanks to a 2.6% rally over the past month. 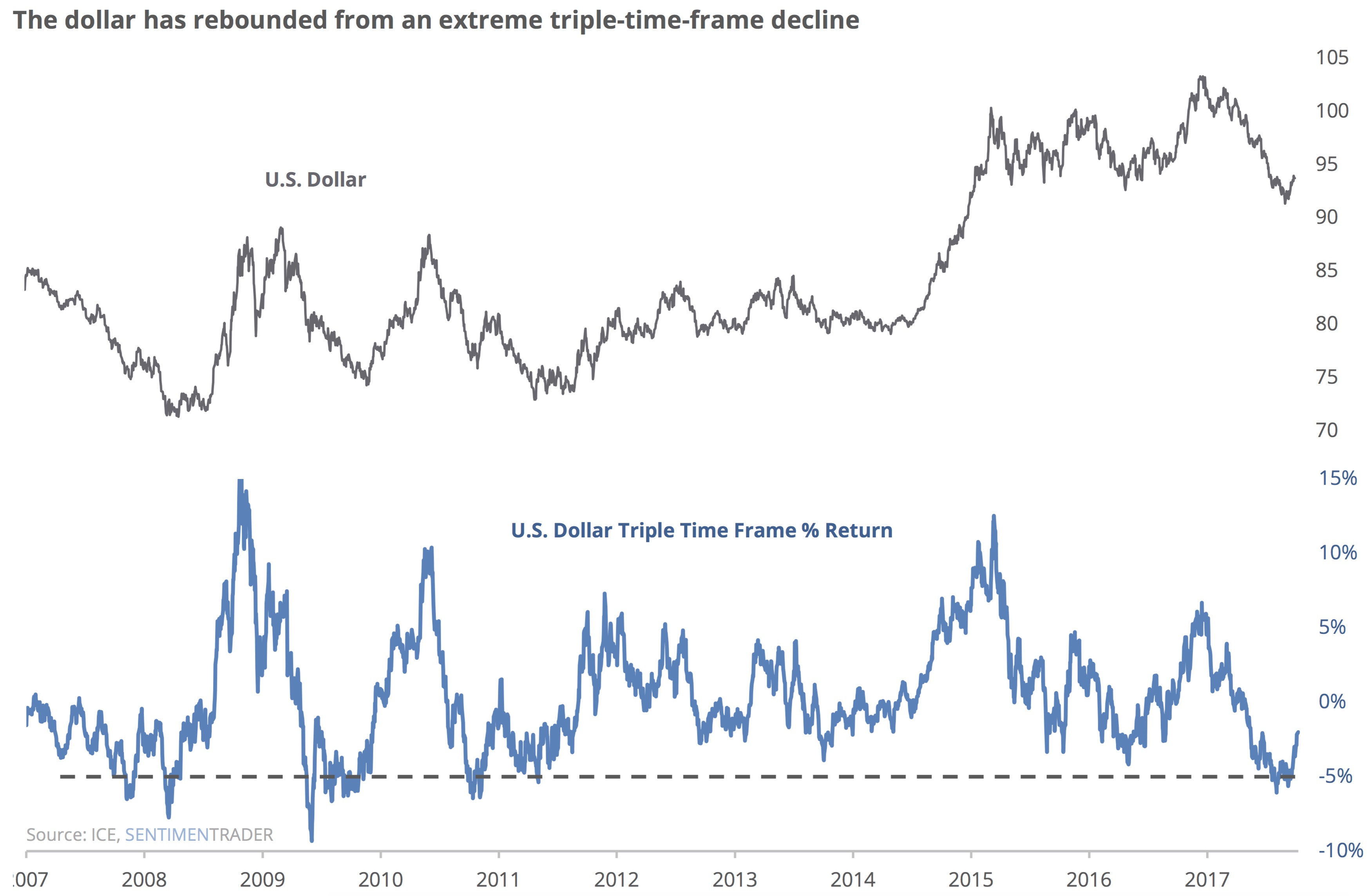 Impact On Commodities
Since the dollar didn’t tend to rally, let’s see if the CRB Commodity Index showed any interest in rewarding investors:

There was a modest bullish bias over the next 2-3 months, with a better-than-average return and risk/reward ratio. It was a little less impressive than we’d usually like to see, and it’s a bit suspect when an edge is confined to a relatively narrow time frame.

It turns out that gold did worse than commodities in general. While its average return across most time frames was better than average, the standard deviation was wide enough that the “relevance” was low. Same goes for the longer-term time frames of 6 months and longer – gold’s return was good after these signals, but they varied so much that it would be a stretch to suggest it’s a bullish edge for the metal.

Overall, there just isn’t a lot here to suggest that the dollar’s rebound is a good sign, for pretty much anything. Not for the dollar, maybe for commodities, and not really for gold.

King World News note: It will be very interesting to see how the COT reports look in the coming weeks, especially if the dollar continues to weaken and gold remains near current levels. KWN will keep a close eye on what commercial traders do with their short positions in the event that scenario unfolds.