Look Out Below
March 8 (King World News) – Otavio Costa:  This is how absurd stocks’ valuations are today: US market cap to GDP needs to fall another 15% just to reach the peak of the Tech Bubble levels.

US Market Cap To GDP Needs To Fall Another 15%
Just To Reach Peak Of Tech Bubble Level! 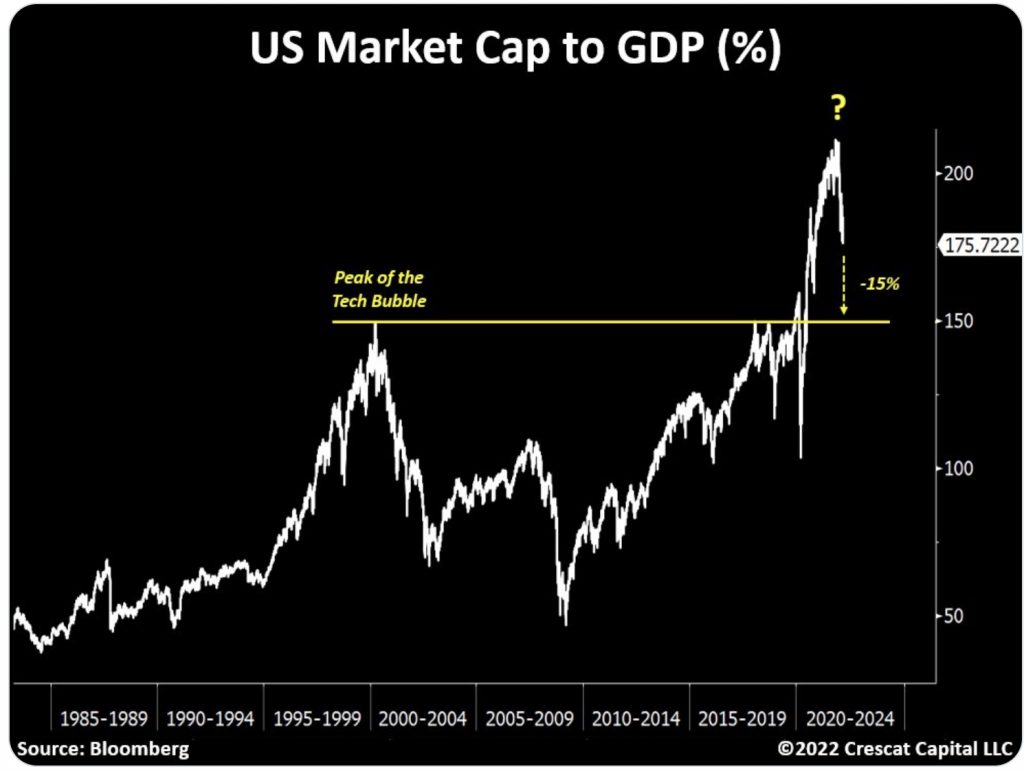 Just Getting Started
Otavio Costa:  The great unwind is just getting started. Out of tech and into natural resources.

THE GREAT UNWIND:
Out Of Tech Into Natural Resources 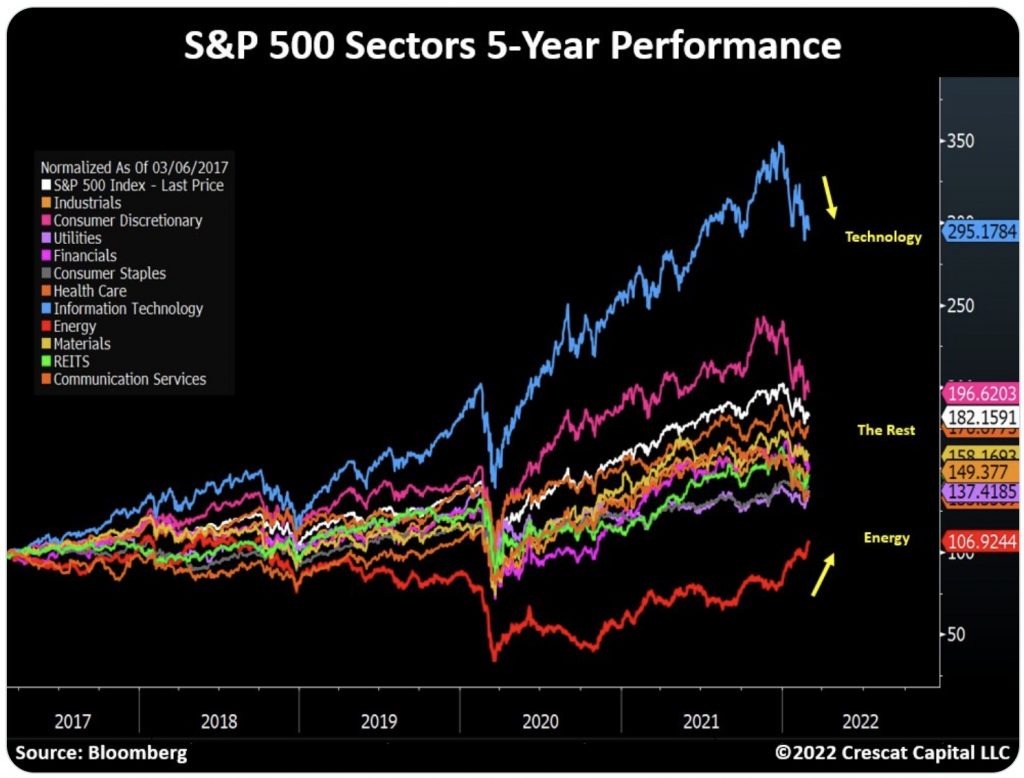 Massive Gold & Silver Volume…Yes, Again
Graddhy out of Sweden:  Once again the volume for spot Gold is absolutely massive very early in the day. Today though, spot Silver has an even more insane volume. That is impressive.

Metal Of Kings Hits New Record
Graddhy out of Sweden:  As said, very clear clues/weight of evidence here during the past weeks and months for what was coming. Also saw early that we could get a parabola to all-time highs. We caught this move from the start. Hoping you all did too. 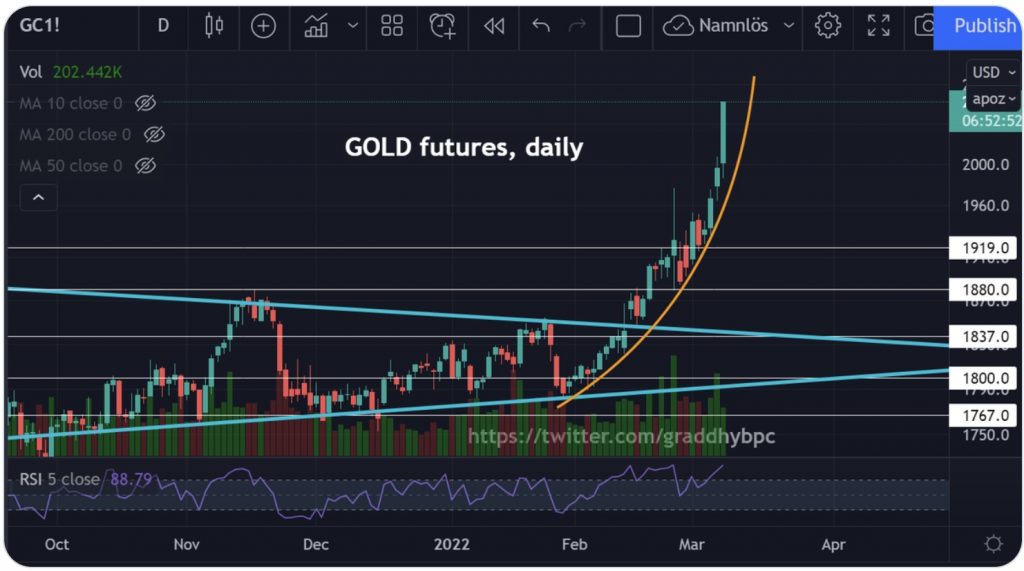 Sell Agricultural Commodities That Are On A Tear
Peter Boockvar:  Over the past few years you’ve heard me be bullish (and long) on ag stocks, particularly fertilizers but I’m a seller now after this vertical spike. The fundamentals have rarely been better but when something enters a parabolic phase, it’s time to get nervous. Speaking of a parabola, nickel is the notable one now. Yesterday morning when I mentioned nickel it was up 35% on the day, it ended the day up 64% to $48,211 per ton and today it traded above $100,000 and was halted when it came back to $80,000 a ton.

Worries about supply from Norilsk Nickel, who also produces palladium, platinum and copper, is the main reason as they produce 5% of the world’s supply. Before the invasion it was at about $23-24k a ton and pre covid around $14k. According to the Nickel Institute, nickel is “essential in hundreds of thousands of products. Its biggest use is in alloying – particularly with chromium and other metals to produce stainless and heat resisting steels.” Nickel is also a key component in electric vehicles, construction and electronics. This is of course now going to dramatically raise the price of building a car and anything else using steel. This all said, as NorNickel is just 5% of the global market, $80,000 a ton is just not sustainable and some shorts must have gotten shredded.

NICKEL SHORT SQUEEZE IS EPIC:
“Are You Not Entertained?” 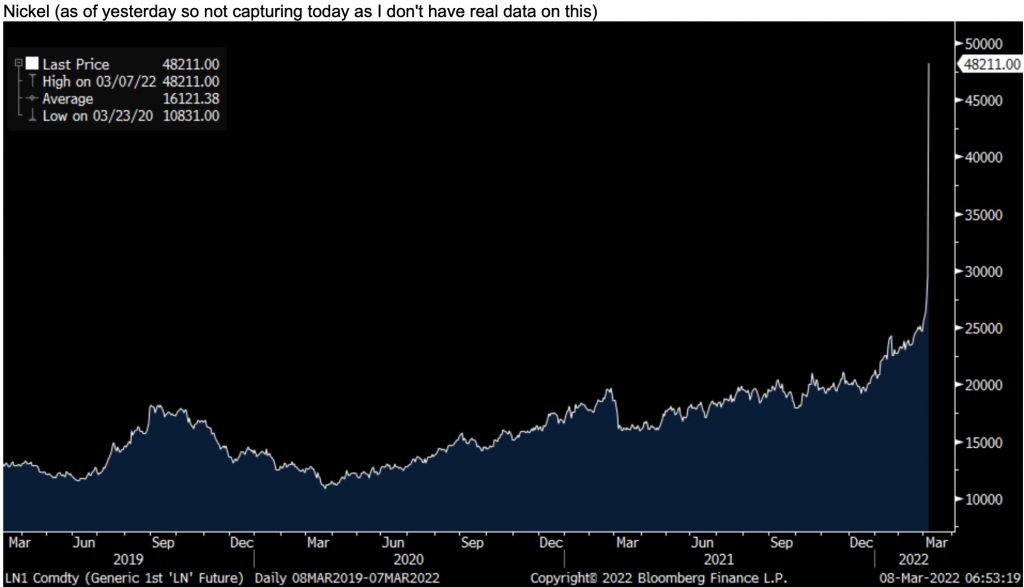 The chaos on the London Metals Exchange has resulted in the exchange to announce that they will allow short sellers to delay delivering on their obligations on their expiring contracts for not just nickel but for tin, zinc, aluminum, cobalt, and lead.

Buy Silver
You want to buy a depressed industrial metal that also has monetary investment demand as well as jewelry? Buy silver that is almost 50% below its record high.

With respect to those electric vehicles that the world is moving towards, that are now getting even more expensive to build, and governments that are pushing us all to buy them over the next decade we are reminded too by what has happened with the energy transition and the problems of when it is force feed by political mandate rather than market realities.

Used Car Prices
With regards to used car prices that we know have skyrocketed, Manheim yesterday said they fell by 2.1% in February from January though still up 37% y/o/y. Hopefully in this sector the law of high prices curing high prices is now about to kick in, but you’ve heard me argue that we’re still going to see reduced used car supply in the coming years (less supply from 3 yr lease expirations and less from rental fleets because of years of subdued new car sales) and for reasons stated above, the cost of new vehicles might only get more expensive.

The February NFIB small business optimism index got less optimistic as it fell to 95.7 from 97.1. That is the lowest since January 2021 just as the jabs started to roll out. 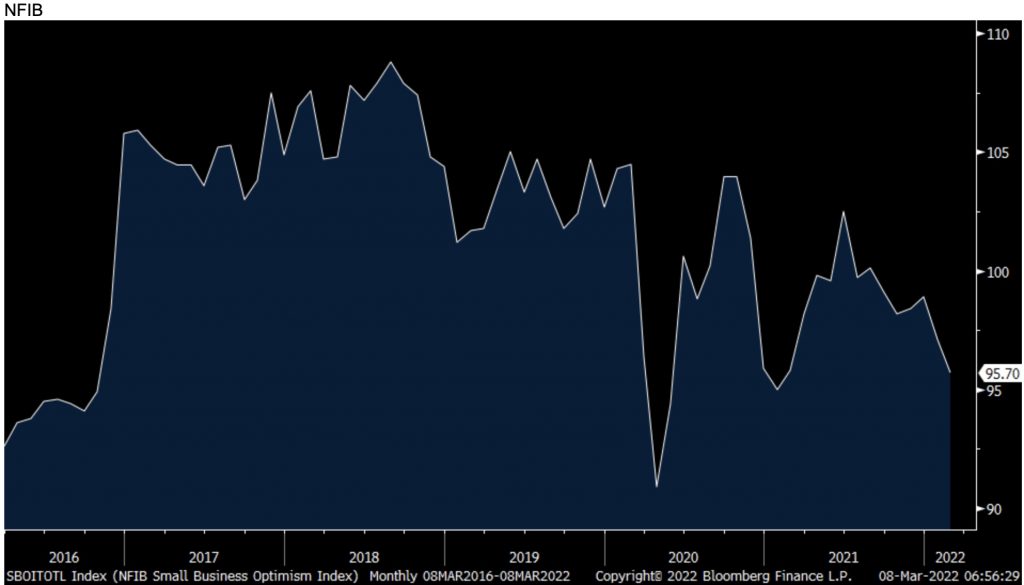 Of particular note was the 7 pt drop in Plans to Hire to 19%, the weakest in a year as it’s still tough to find people with a 1 pt rise in Positions Not Able to Fill.

Plans To Hire Weakest In A Year 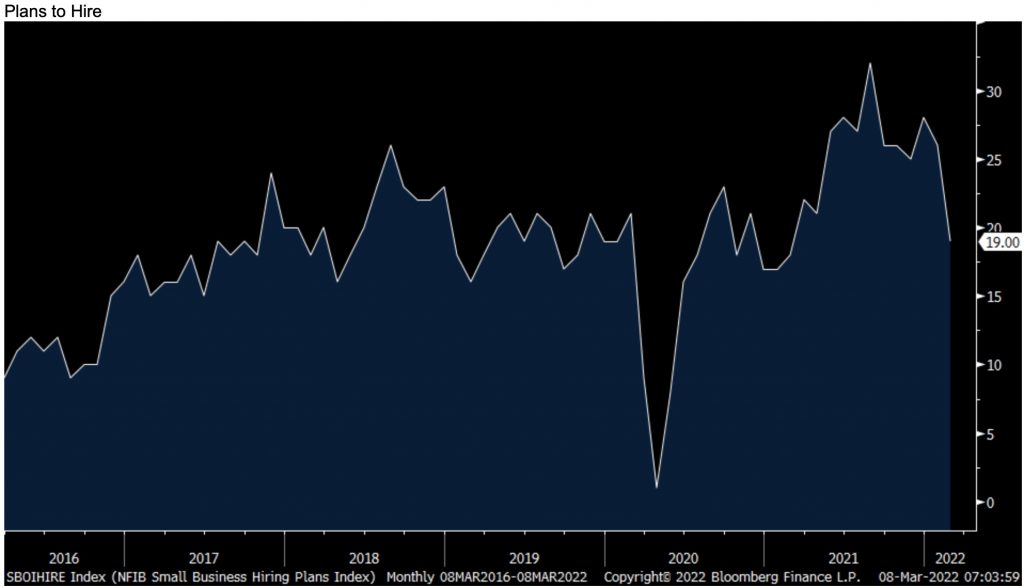 Off a record high, current compensation fell 5 pts and compensation plans was down by 1 pt. Capital spending plans softened by 2 pts and is also 2 pts below its 6 month average. And the outlook is not looking good either as those that Expect a Better Economy, Expect Better Sales and said it’s a Good Time to Expand all fell. Inventory accumulation was down 1 pt. Earnings trends remained firmly negative at -17, though unchanged with January. On pricing Higher Selling Prices rose to a fresh record high going back to 1974, higher by 7 pts to 68%. 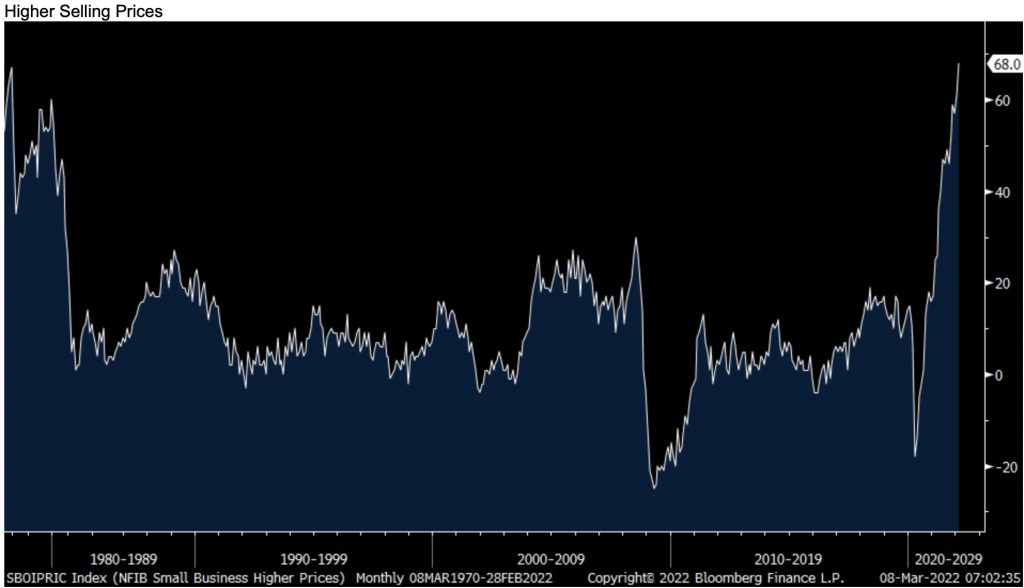