The gold and silver takedown continued for a second day, but here is a ray of hope.

November 30 (King World News) – A portion of today’s note from legend Art Cashin:  Two Long Christmas Traditions Converge – Last night saw the lightening of the 84th annual official Rockefeller Center Christmas Tree. We say “official” because while the Rockefeller folks put up the first official tree in 1933, a tree at the center was first seen in 1931. Here’s how I described it a few years back:

On this day in 1931, America was spiraling into the depths of the Depression. Thousands of banks had closed and there was a national panic that more closings might be imminent. And, large corporations announced huge layoff programs, stunning many who thought they were safe. Those who had a job were grateful just to be employed.

Among those were a group of construction workers in New York City. As they stood amidst the rubble of demolished buildings in midtown Manhattan, they talked of how lucky they were that some rich guy had hired them for a new but risky development. And, since it was near Christmas, they decided to celebrate the fact that they had a job.

They got a Christmas tree from a guy in a lot on the corner who apparently had discovered that folks with apartments suitable for 18 foot trees were not too free with the green pictures of dead presidents in 1931. So the workers stood the big tree up in the rubble and decorated it with tin cans and other items in the lot. A photographer saw it as a perfect symbol of 1931. It caught on immediately and each Christmas as the project proceeded a new tree was put up. And even after the project (Rockefeller Center) was completed two years later, management put up a new (and much bigger) tree each year.

Tonight the NYSE Christmas Tree on Broad Street will be lit. The NYSE tree tradition goes back to 1923 pre- dating the Rockefeller Center tree by nearly ten years.

This year’s Rockefeller tree is 75 feet high. The NYSE tree is 65 feet tall. Reasonably close. The City Hall tree is about 25 feet, we hear.

Overnight And Overseas – In Asia, markets diverged significantly. Tokyo rallied moderately, while Hong Kong and India got slammed. Shanghai was lower but not crushed.

Europe was unfazed. London was up modestly but markets on the continent are solidly higher.

Among other assets, crude is higher, while gold is off slightly. The euro is a touch softer and yields are down a tick or two.

Consensus – A mini-flash crash in Bitcoin late yesterday is dominating much of the chatter. Traders will focus on the Senate tax bill.

Also of importance, this was sent to KWN by top Citi analyst Tom Fitzpatrick…

Top Citi analyst Tom Fitzpatrick says the euro may head higher:  “Looks like a reverse head and shoulders. It would give a target of 1.2167.” (see chart below). 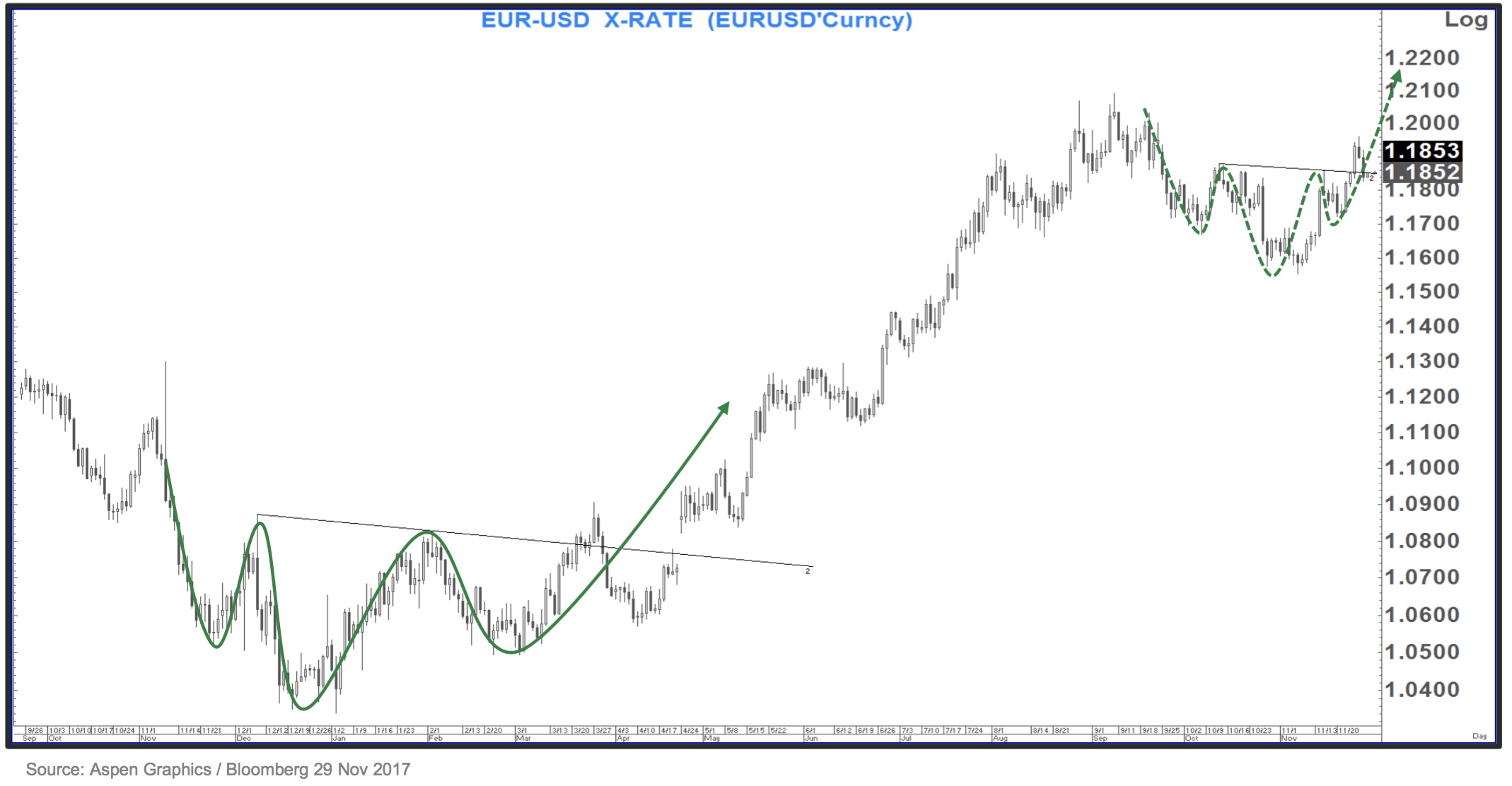 This would, of course, translate into weakness for the US dollar.  Fitzpatrick noted:  “Support levels (on the US dollar) are still in focus in the 91.52-92.63 area This includes the 55 month moving average and horizontal levels that come from the early 2000s. (see chart below).

US Dollar set for further losses?

That market has turned in this zone on many occasions. Should we see a firm breach of this area it would lead the way for further losses towards 88.7 (and possibly lower over time).

***ALSO JUST RELEASED:  BITCOIN WARNING:  “If we let things continue, I feel that it will lead to some serious distorted or pathological phenomenon.” CLICK HERE.

This Shocker Will Cause Gold To Vault To $5,000 Virtually Overnight