As the world edges closer to the next crisis, today the man who has become legendary for his predictions on QE and historic moves in currencies and metals just warned investors that they must own gold as the global financial system unwinds because cryptocurrencies and ETFs are dangerous.

This Would Have Been Unthinkable
September 28 (King World News) – Egon von Greyerz:  “There is something vaguely troubling when the unthinkable becomes routine.” This is what Claudio Borio of the BIS (Bank for International Settlement) commented on the $17 trillion of debt with negative interest. He went on to say: “Even at the height of the Great Financial Crisis this would have been unthinkable.”

But this is where the world is today, unthinkable debt, unthinkable markets, unthinkable risk and unthinkable leaders who have totally lost control and by their actions are increasing risk exponentially. Yes, I am of course totally aware of the theory that this is all part of a plot by the globalists to take control of the world. Chaos is one way of achieving control, but the risk is that if the plot fails, we will see a total collapse of the financial system and uncontrollable chaos. In my view, this is the more likely scenario…

King Croesus
It was very different in the days of King Croesus of Lydia (now Turkey), who died 547 BC. It is from him we have the expression “Rich as Croesus.” One of Croesus ancestors was King Midas, who was given the gift that everything he touched turned to gold. This was a wonderful gift until he realized that absolutely everything he touched turned to gold, even his food. So he was given the chance of getting rid of his gift by washing it off in the river Pactolus. 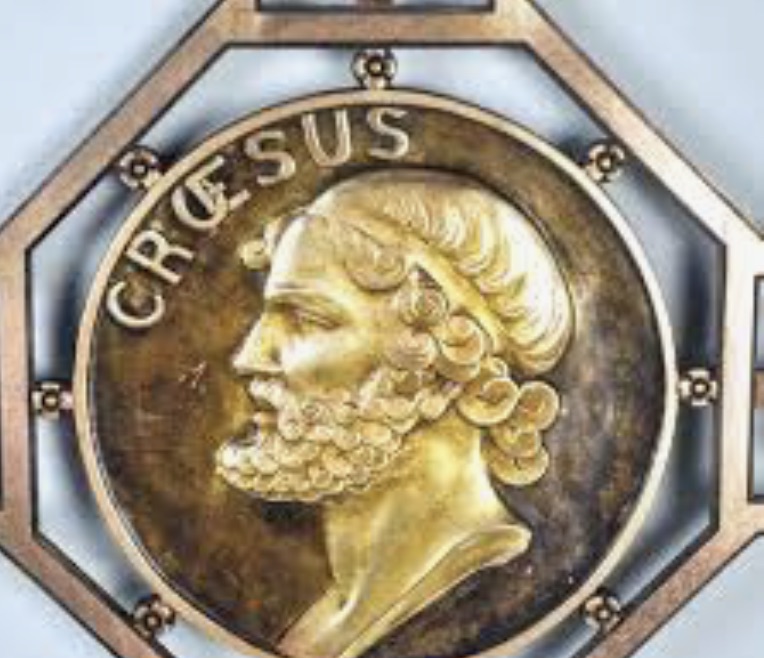 From that point on the river was full of gold. It is from this river that Croesus derived most of his gold and also from gold mines. The Lydians are said to be the first to have minted gold coins.

Sadly, Croesus soon discovered that wealth is ephemeral. Persia conquered Lydia and Croesus lost his wealth including the gold. But as long as you can hold on to it, gold is eternal wealth and nature’s currency.

Gold held for wealth preservation purposes must be held in physical form and outside the banking system. The more counterparties between yourself and your gold, the higher the risk. But there must always be one counterparty. If you hide your gold in a hole in the ground, the hole is your counterparty. Someone might steal the gold or threaten your wife or children to find out where the gold is hidden.

When you hold gold to protect against all of the risks in the world, you clearly don’t want to hold it in a bank. We have seen so many examples of the bank not having the physical bars when clients intended to move the gold from the bank vault to private vaults. So even when the banks tell the client they have allocated physical gold, the gold is sometimes not there. Until now, the bank has rectified the situation by buying new bars. But one day when the system is under pressure, there might be no gold available or the bank will be under financial distress and not in a position to buy new gold.

Both institutions and wealthy individuals use gold ETFs to invest in gold. But since gold is the ultimate wealth preservation asset it should not be held in paper form.

Let me explain some of the drawbacks with gold ETFs:

It is extremely difficult to understand that major investors can accept to hold a wealth preservation asset and insurance against a rotten financial system in paper form. If there is a financial crisis they are unlikely to get their hands on either the gold or the cash that the gold represents. Why take this risk when you can hold physical gold outside the financial system in the safest vault in the world in the Swiss Alps? The holder of the gold holds it directly in his or her own name with direct access to the gold. Also, the cost is similar to GLD but it includes insurance and the investors own physical gold that he or she has direct access to.

Crypto Worries
Cryptos and Bitcoin are often mentioned as the new gold, especially by the younger generation today that often believes that cryptocurrencies are the safest money you can hold as well as the best way to avoid government control. A cryptocurrency can have some advantages as a method of payment, but there are so many drawbacks that makes it totally unsuitable as wealth preservation.

Here are some of the problems with cryptos:

Let’s go back to the present and look at the short term and the areas which we normal mortals can influence. I have made it clear that from a wealth preservation perspective, neither gold ETFs nor cryptos can function as a true insurance against the severe problems that the world will encounter in coming years.

Physical gold and silver, safely stored, is certainly not a panacea for all the problems which the world will encounter in the next few years, but it is the best economic and financial insurance that you can hold today in a world where most assets will crash.

As I have made clear in recent articles and interviews, gold and silver have started the next strong up-leg towards multiples of current prices. The small correction we are currently seeing will end shortly. Thereafter, we will see a fast move in the precious metals that will surprise most people. Investors must not focus on price, but instead on the importance of holding protection against a financial system which is unlikely to survive in its present form…For those who would like to read more of Egon von Greyerz’s fantastic articles CLICK HERE.

This Is A Big Warning Signal CLICK HERE TO READ

Two Different Paths Being Taken By Central Banks, Infrastructure Bill, And When It Comes To Inflation “Let’s Pray”