Gold & Silver Surge And Look At These Shocking Economic Indicators

On the heels of a continued surge in the price of gold and silver, one pro says it’s time for investors to get aggressive in this sector. Also look at these shocking economic indicators.

Time To Go On Offense
December 2 (King World News) – Otavio Costa:  Precious metals bottomed and it’s time to play offense. Gold is almost back to its 2011 monthly highs. If that is the play book for the miners, there is a 85% upside from here. Game on. 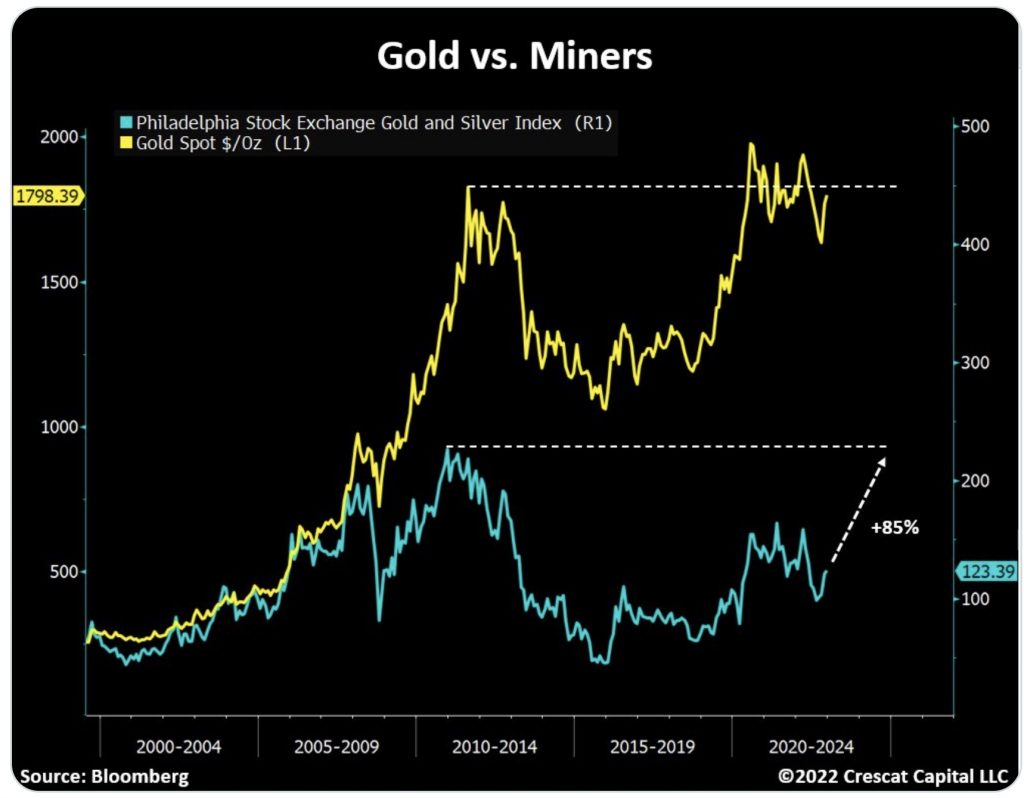 Unemployment Rising
Peter Boockvar:  Let’s be honest, Jay Powell said nothing new and only just reaffirmed what we’ve heard from all of his colleagues over the past few weeks. I believe the reaction was more due to ‘no news is good news’ and it being the last day of the month.

Quantifying the job losses in tech, Challenger’s labor report today said the sector announced 52,771 jobs cuts in November, “for a total of 80,978 this year. This is the highest monthly total for the sector since the firm began keeping detailed industry data in 2000. It is the highest YTD total for the sector since 2002, when 128,563 Tech sector cuts were recorded through November and 131,294 for the year. This year’s tech cuts are 535% higher than the 12,761 cuts announced through the same period in 2021.”

Job cuts of note were also seen in the auto sector as well as financial technology and the real estate industry with the latter well explainable.

With respect to initial jobless claims, for the week ended November 26th they totaled 225k, 10k below expectations and after last week’s 241k print (revised up by 1k). Keep in mind that the Thanksgiving holiday likely distorted this figure. The 4 week average was 229k, near a 3 month high. 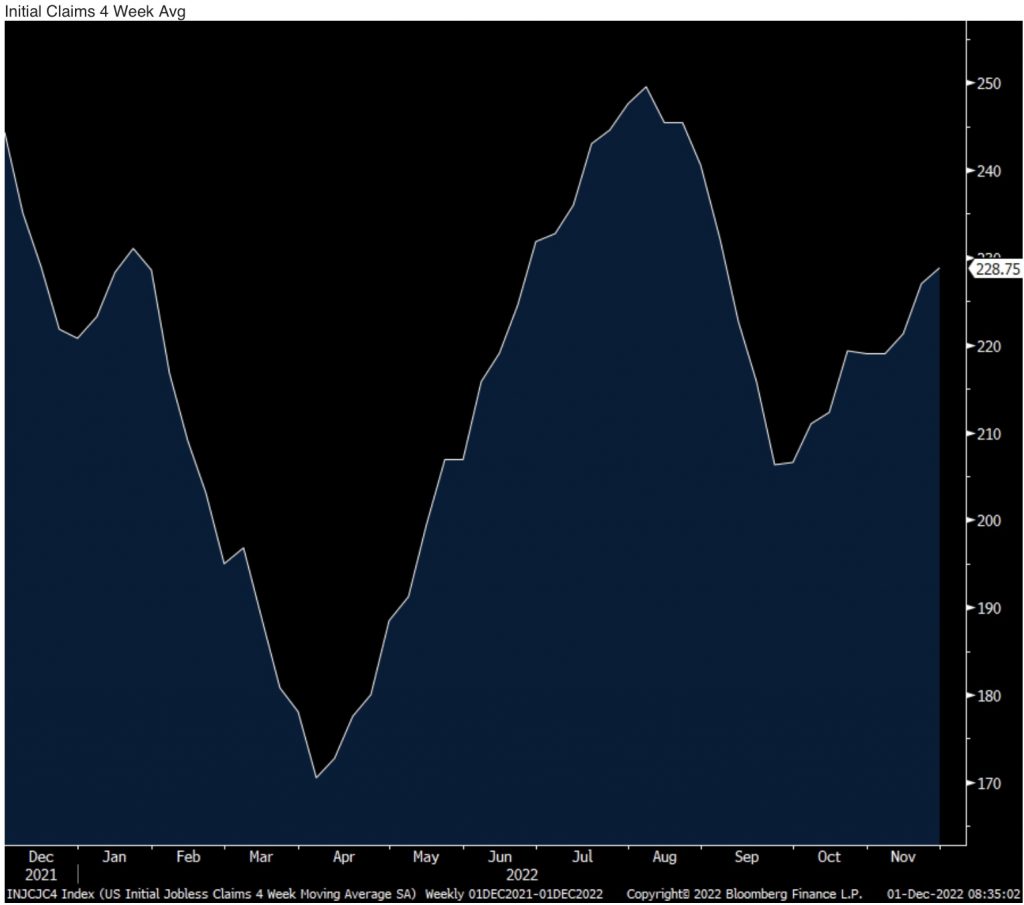 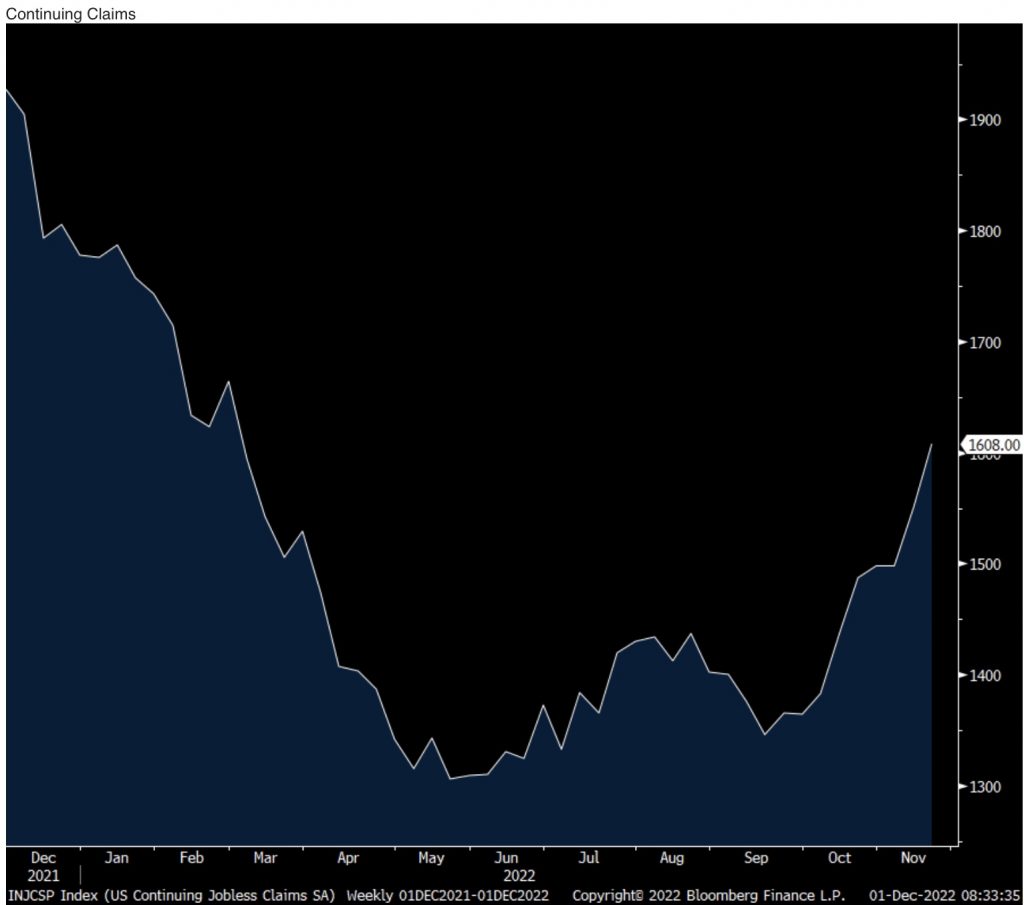 Inflation
The PCE October inflation deflator was up .3% m/o/m headline and .2% core, about as expected when you include the September slight upward revision (decimal points). The y/o/y gain was 6% headline and 5% core. As seen with CPI, goods prices continue to moderate in its rate of gain while services inflation keeps accelerating and it is the latter that Powell held on to in still talking tough yesterday about his fight against inflation. Again, PCE understates inflation relative to CPI because of how it over weights healthcare and underweights rents and because of how that healthcare figure is computed.

Gold Back Above $1,800
Inflation breakevens are little changed in response as the figures were about in line. The dollar though continues to weaken and is now at the lowest level since mid August and gold is back above $1,800…

Personal Spending
October personal spending was up .8% m/o/m as expected with a pickup in spending on goods (maybe in response to discounting going on) while income was higher by .7%, 3 tenths more than forecasted. On income, transfer payments led the way. Private sector wages and salaries rose .5% m/o/m. As the spending number was as expected, we won’t see any GDP changes today of note. I did see S&P Global lower its Q4 GDP estimate yesterday to zero.

Overseas
Quickly overseas, November manufacturing PMI’s in Asia that were below 50 was seen in Taiwan, South Korea, Japan, Vietnam and Malaysia. Those above were in India, Thailand, Indonesia and the Philippines. China’s private sector Caixin manufacturing index was 49.4 vs 49.2 in October.

The November Eurozone manufacturing PMI was revised slightly lower to a still weak 47.1 while the UK print was revised up to 46.5 from 46.2 but still below 50.

Rents In The US
Apartment List reported its National Rent report covering November and its index fell by 1% m/o/m, “marking the 3rd straight m/o/m decline, and the largest single month dip in the history of our index, going back to 2017. The timing of the recent cooldown in the rental market is consistent with the typical seasonal trend, but its magnitude has been notably sharper than what we’ve seen in the past, suggesting that the recent swings to falling rents is reflective of a broader shift in market conditions beyond seasonality alone. Going forward it is likely that rents will continue to dip further in the coming months as we move through the winter slow season for the rental market.”…

Year to date rent growth is 4.7%, closer to the pace seen in 2018 and 2019 and well off the red hot pace of 18% last year. The vacancy rate also is picking up to 5.7% after bottoming at 4.1% one year ago. “Today’s vacancy rate still remains below the pre-pandemic norm, but could get back to that benchmark as early as next spring, if the current rate of easing continues.”

Bottom Line
Bottom line, seeing inflation roll over and the soon to be peak in Fed rate hikes was the first mountain to climb for both the economy and markets in 2022. The next mountain needing to be conquered, and will be the 2023 focus I believe, is the economic consequences to such a sharp rise in interest rates, the higher cost of capital that both businesses and households have to deal with and the recession it creates.

US Personal Savings Rate Has Collapsed To One Of The Lowest Levels In History! 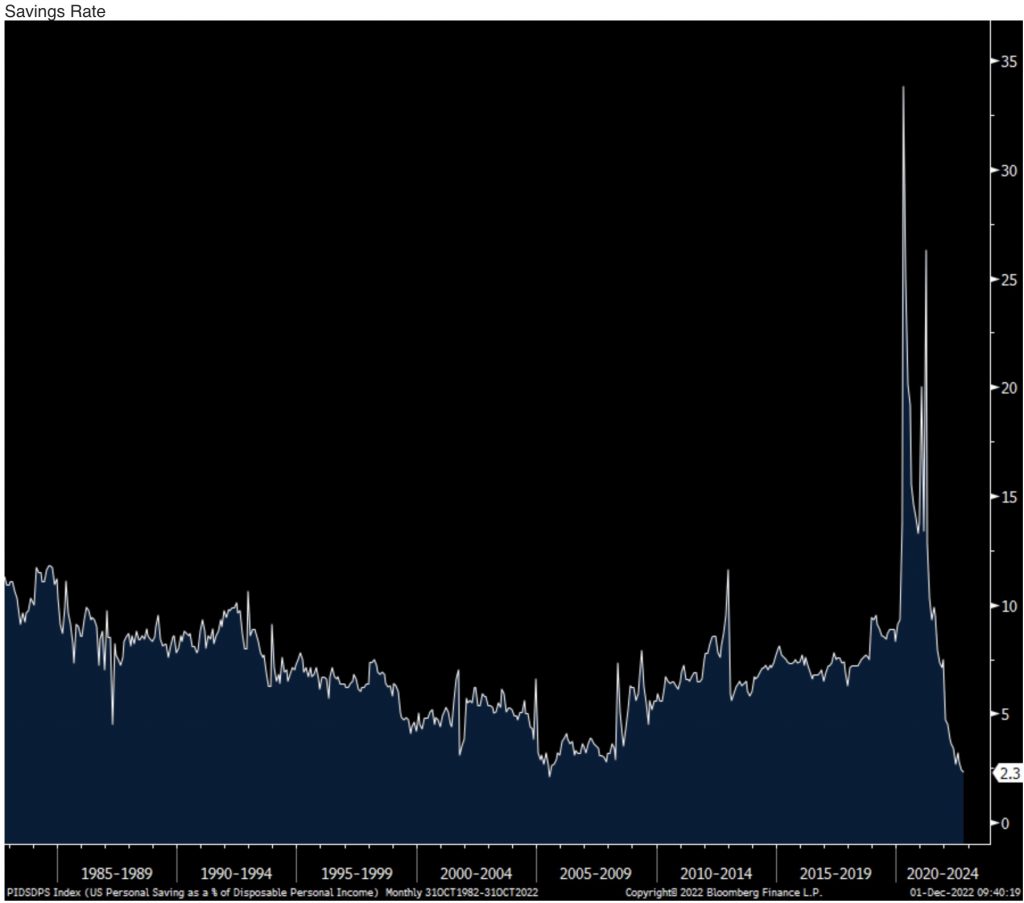 Bottom Line
The bottom line is easy but unfortunate here, the savings well is running dry and why credit card usage, as mentioned by a few retailers over the past few weeks, is picking up. And this gets to my whole repeated point that it is almost impossible to avoid a recession when the cost of credit goes higher. Just as we need food to live, the US economy for the past 20+ years has needed cheap capital to grow and without a large pool of savings, that was ever more so. Now that savings is depleting and interest rates go higher, how do we not have a recession?

Manufacturing Collapse
The November ISM manufacturing index fell into contraction at 49 vs 50.2 in October and below the estimate of 49.7. 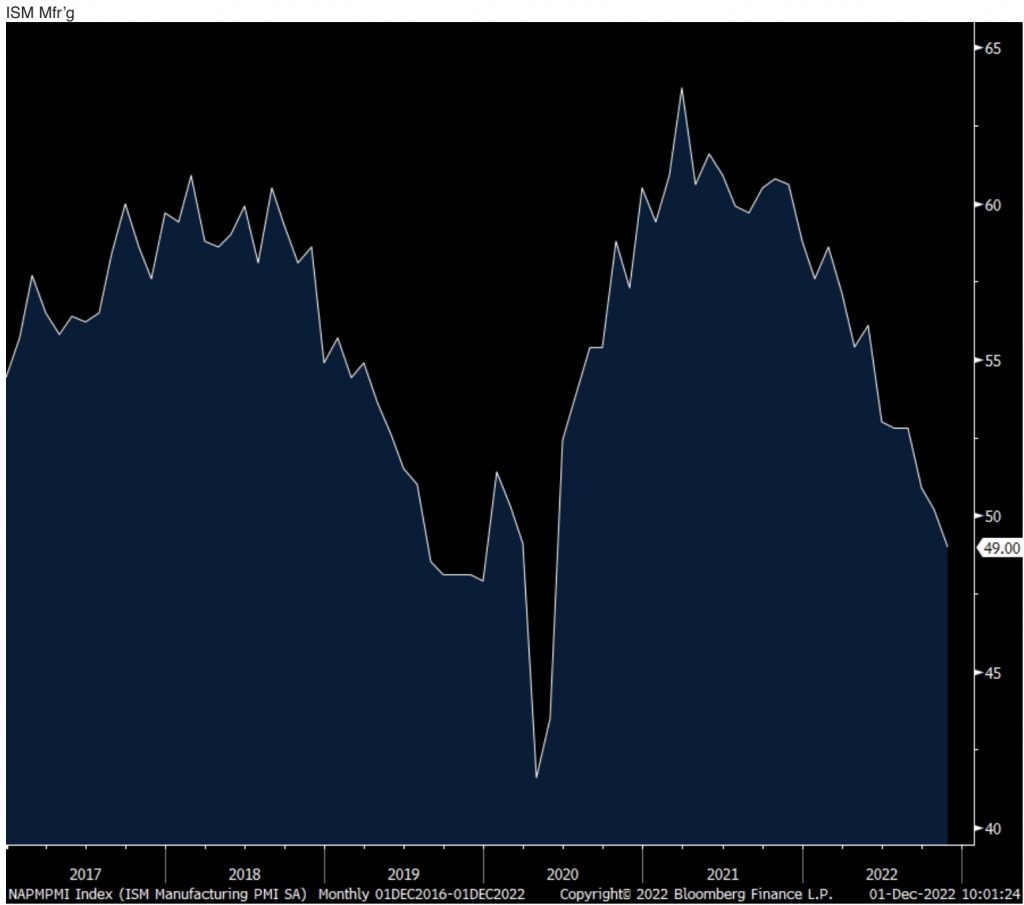 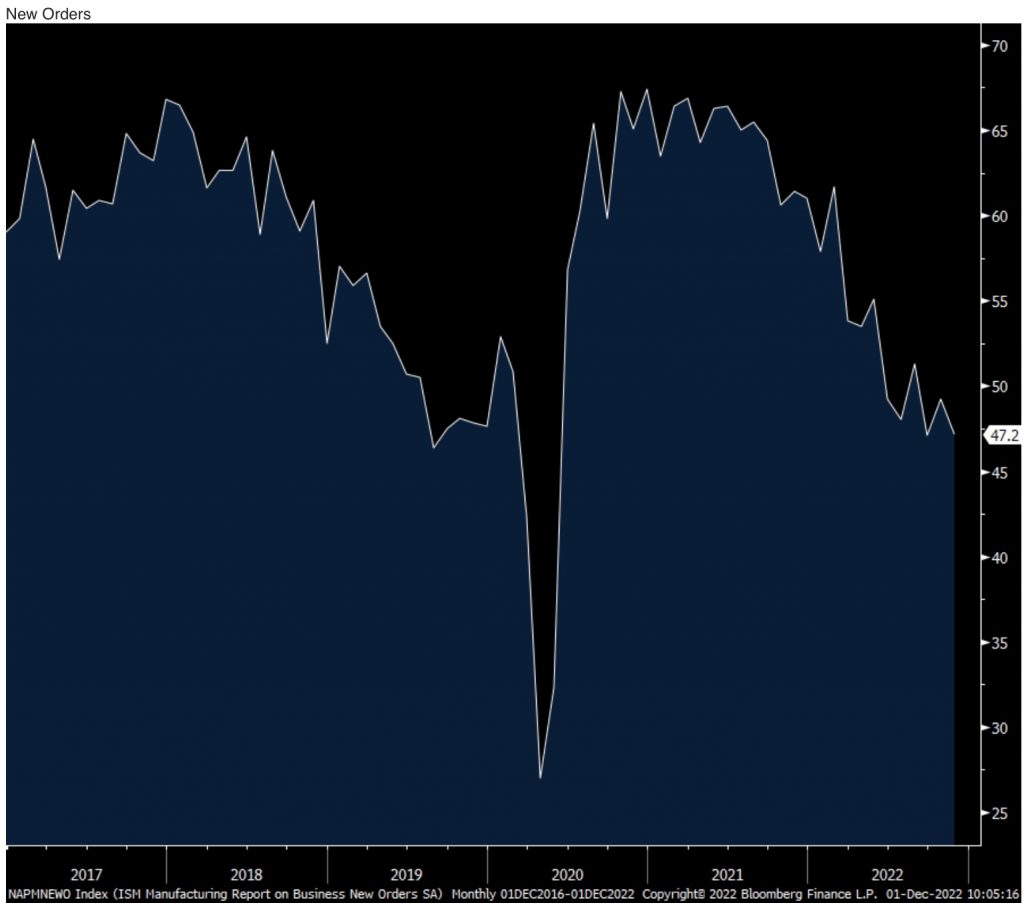 Of the 18 industries surveyed, only 6 saw growth vs 8 in the month before and 9 the month before that. Those seeing a contraction totaled 12 industries vs 10 in October. Chemicals in particular, a key building block to just about everything that is produced, contracted for a 4th straight month.

The ISM said this on hiring, “Labor management sentiment continued to shift, with a number of panelists’ companies reducing employment levels through hiring freezes, attrition, and now layoffs. In November, layoffs were mentioned in 14% of employment comments, up from 6% in October.”

Bottom line, I’ll repeat again what I said yesterday, add the manufacturing sector to the recession side of the economic ledger…

Here were some business quotes:

“Customer demand is softening, yet suppliers are maintaining high prices and record profits. Pushing for cost reductions based on market evidence has been surprisingly successful.”

“Future volumes are on a downward trend for the next 60 days.”

“Orders for transportation equipment remain strong. Supply chain issues persist, with minimal direct effect on output.” I’ll add, this sector is playing catch up to the dearth of trucks last year and the truck stocks have done amazing.

“Consumer goods are slowing down in several of our markets, although the US economy seems decent. Cannot say the same for the European economy.”

“General economic uncertainty has created a slowdown in orders as we approach the end of the year, and many of our key customers are reducing their capital expenditures spend.”

“Overall, things are worsening. Housing starts are down.”

“Looking into December and the first quarter of 2023, business is softening as uncertain economic conditions lie ahead.”

***To listen to Nomi Prins discuss her surprising predictions for 2023 as well as why 2023 will be a huge year for the gold, silver and mining share markets CLICK HERE OR ON THE IMAGE BELOW.