As we kickoff the first trading week in April, one of the greats in the business just warned that a perfect storm of events is going to ignite the gold price.

Busy Week
By Trey Reik, Senior Portfolio Manager, Sprott USA
April 1 (King World News) – This past week witnessed an unusually rich sequence of gold supportive events. Indeed, four successive developments came so fast and furious that we expect strong performance in the gold complex in coming weeks as investors have time to process the significance of this recent news.

1) The Fed Hits the Ejector Seat
First, Fed Chairman Powell’s press conference following the 3/20/19 Federal Open Market Committee (FOMC) meeting proved far more dovish than consensus expectations. Mr. Powell confirmed that additional rate hikes are now completely off the table for 2019, and he even seemed a touch pitiable in suggesting one hike might still be in the cards for 2020. As recently as 12/16/19, Chair Powell had defiantly asserted the Fed’s balance sheet runoff was, “working well,” “on autopilot,” and “not subject to review.” Just three months later, with the Fed’s balance sheet still measuring an absurd $4.0 trillion, the FOMC is now confirming that balance sheet runoff will cease this year.

Further, the Fed has determined that allowing scheduled balance sheet “normalization” to continue through year-end has become too risky, so the FOMC voted unanimously to abandon incremental QT this September (all maturing mortgage paper will be rolled into Treasury purchases beginning in October). But wait, there’s more! The Fed apparently considers the current rate of balance sheet runoff to be too dangerous to maintain for even two more months, so beginning in May, the Fed will halve the Treasury runoff rate from $30 billion to $15 billion per month. Woah!

Those adamant that Fed QT has never posed threats to global liquidity or financial asset valuations are unlikely to be swayed by the Fed’s sudden lurch from autopilot to ejector seat after pruning such a laughably tiny 15% of the $3.588 trillion in total QE-era asset purchases. We can only wonder whether ex-Vice Chair Dudley is any less “amazed and baffled” (Let’s Stop Worrying About the Fed’s Balance Sheet 2/15/19) about the “preoccupation of financial types” with balance sheet runoff, now that the FOMC has panicked and scheduled the entire program for shutdown.

2) Europe’s Economy Weakens
Second, on 3/22/19, with global interest rates already retreating from the FOMC’s surprisingly dovish communique, a bevy of soft European economic data hit the tape. March Eurozone PMI figures came in weak across the board, with the Eurozone Manufacturing PMI registering a 71-month low of 47.6. German Manufacturing PMI fell for the 14th time in the past 15 months to 44.7 in March, down from 47.6 in February, its steepest monthly decline since August 2012. German factory orders collapsed at the steepest rate since April 2009, and hiring slipped to a 34-month low. French Manufacturing PMI registered 49.8 (versus estimates for 51.5) and employment growth fell to near stagnation.

3) Treasury Yield Curve Inverts
Third, the mix of Fed dovishness and European economic weakness ignited a tidal wave of Treasury purchases on 3/22/19, driving 10-year yields to a 14-month low of 2.416%, and finally triggering dreaded inversion of the full Treasury yield curve (with 10-year yields falling below three-month yields) for the first time since 2007. Despite overwhelming historical linkage of Treasury curve inversion with impending recession, we now expect a steady stream of rationalizing from market strategists and equity bulls about how things really are different this time. 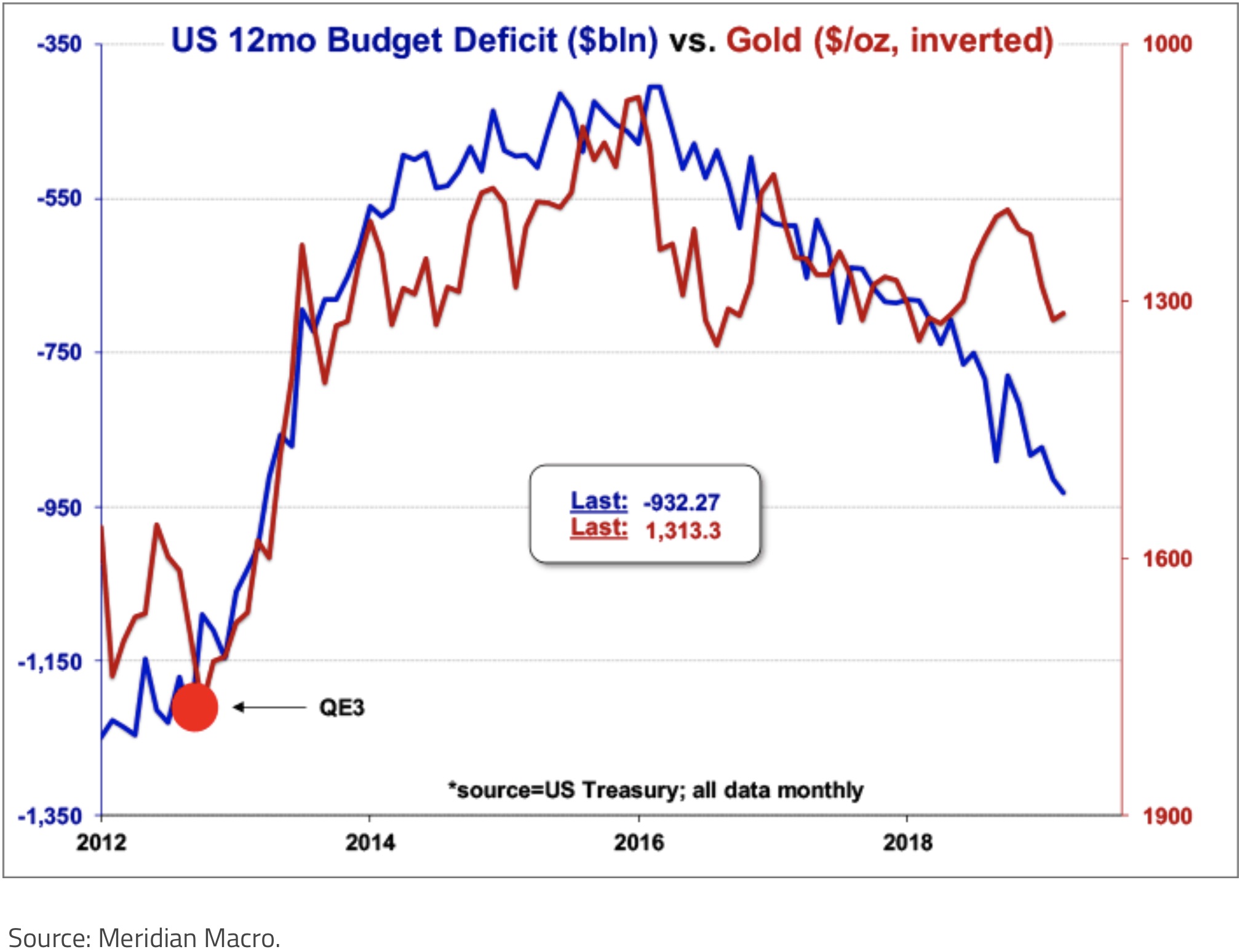 4) U.S. Budget Deficit Sets a Single-Month Record
Fourth, on Friday afternoon (3/22/19), the Treasury reported a $234 billion budget deficit for the month of February, some $7 billion higher than estimates, $20 billion higher year-over-year, and easily the highest single-month deficit on record. The trailing 12-month deficit soared to $932.3 billion and now threatens to crack the $1.0 trillion barrier long before September fiscal year-end. As shown in Figure 1, the gold price (inverted) has been closely linked to the trailing 12-month federal budget deficit ever since the launch of QE3. Should this tight correlation hold true in future months, the gold price will have a lot of “catching up” to do…

It would be difficult to exaggerate how rapidly global monetary conditions are deteriorating. We have long maintained that in context of current global debt levels, the Fed’s dual policy agenda of simultaneous rate hikes and balance sheet reduction has been far too aggressive. Investors are about to learn that once QE is employed, it can never stop. Neither the U.S. nor the global economy can return to “normal” liquidity conditions without massive debt rationalization. Because global central banks always do everything in their power to forestall episodes of debt deflation, they are now pivoting in unison back towards easing posture. 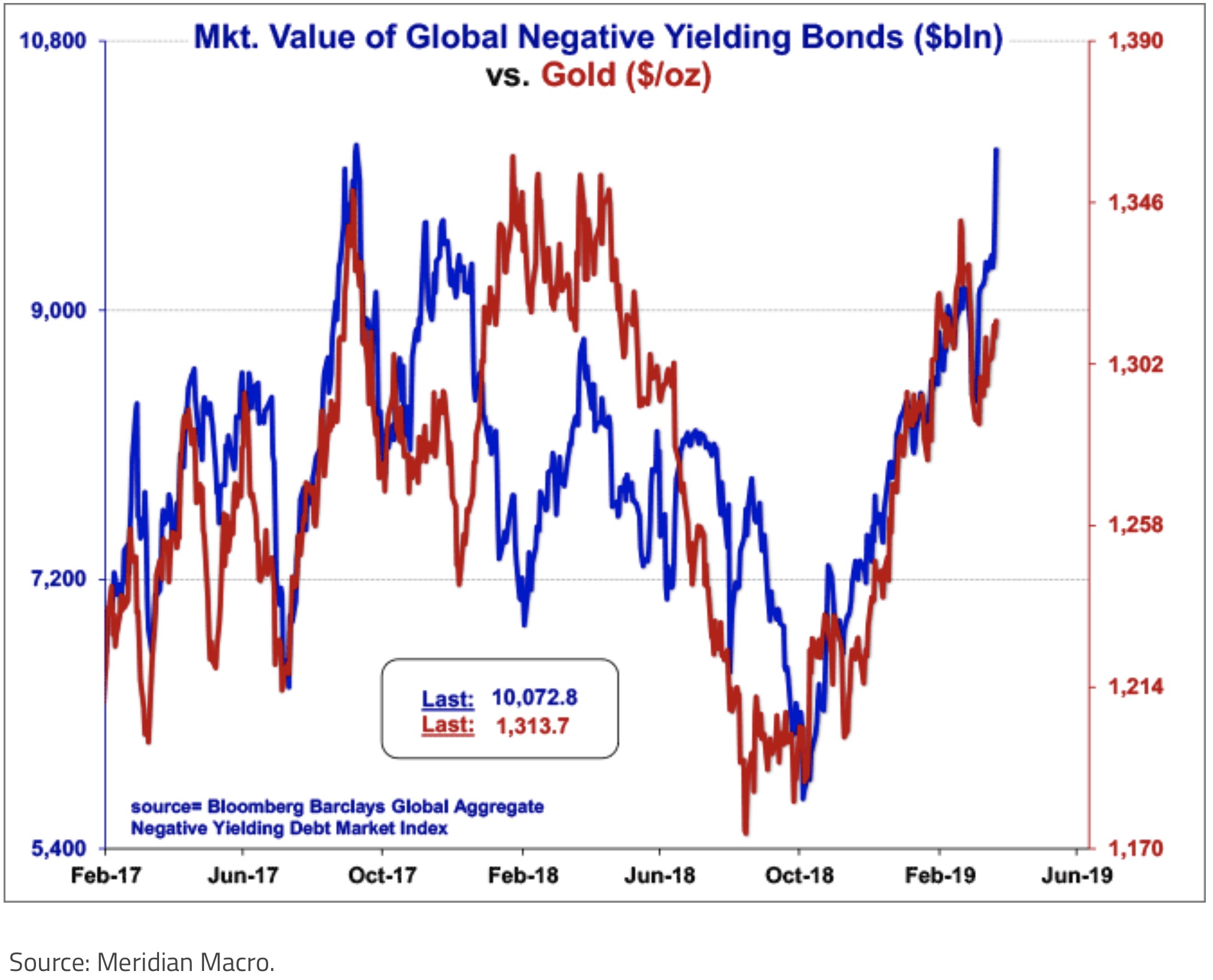 Recognizing the same scent of deflation now troubling central banks, global fixed-income investors are racing to lock in duration wherever it can be found. Because we have focused for so long on identifying signals of incipient monetary and financial stress, it seems patently clear to us that due to insufficient central bank liquidity, the global financial system is starting to freeze-up. A sign of rapidly deteriorating economic prospects now flashing red is the accelerating collapse in sovereign bond yields, with German and Japanese curves already negative out 10 years. As shown in Figure 2, the global total of negative-yielding sovereign bonds measured $10.07 trillion on 3/22/19, up $805 billion during the prior week, and up 76% since 10/4/18 (the day following Chair Powell’s “long way from neutral” comment).

As shown in Figure 2, gold has certainly taken notice.  At the risk of hyperbole, we would suggest that events of the past week serve as further evidence that a perfect storm of global fundamentals appears to be gathering in gold’s favor.