Here is a look at gold and silver bull catalysts, liquidity train, ice-age, plus the quote of the week. 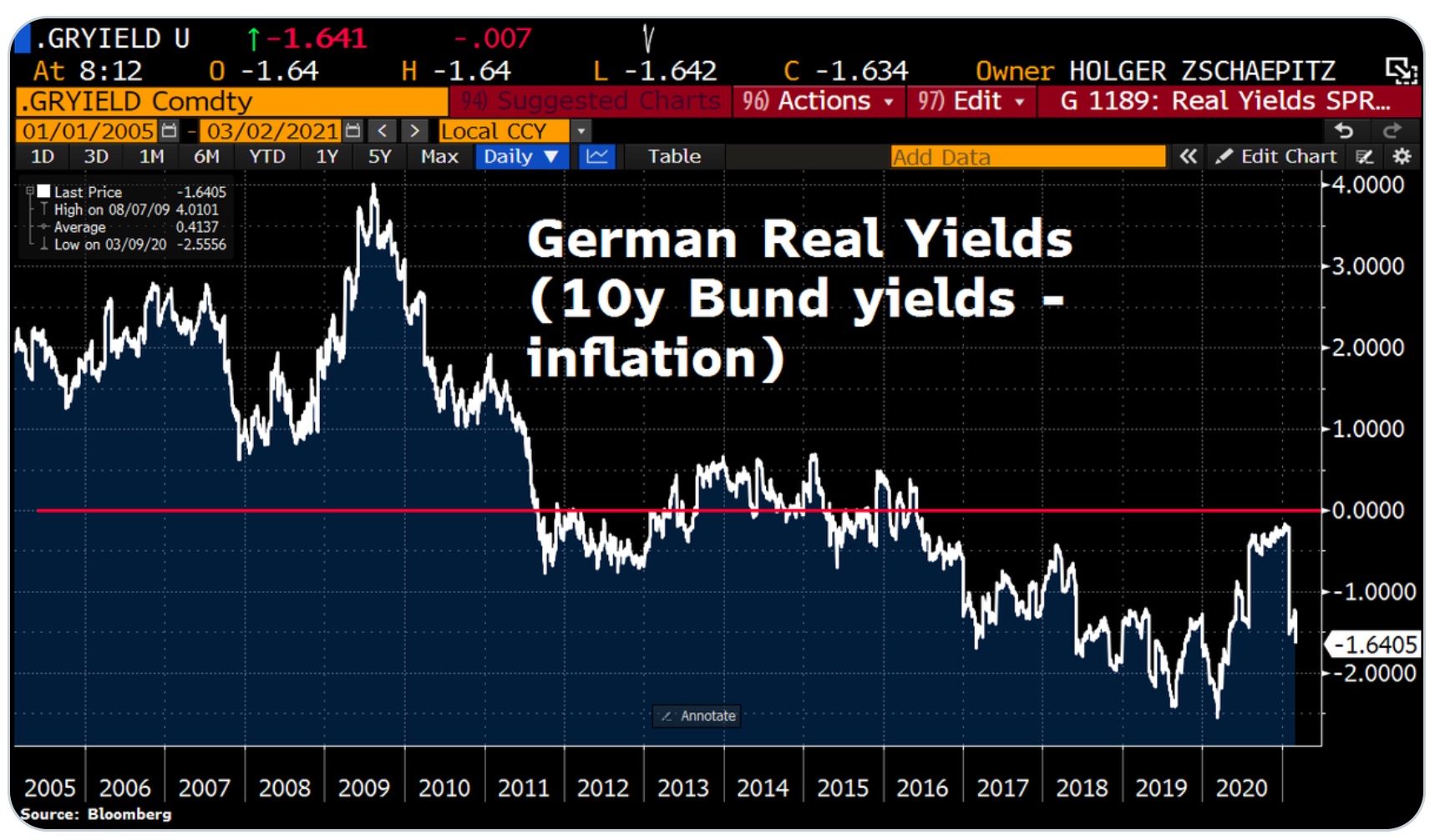 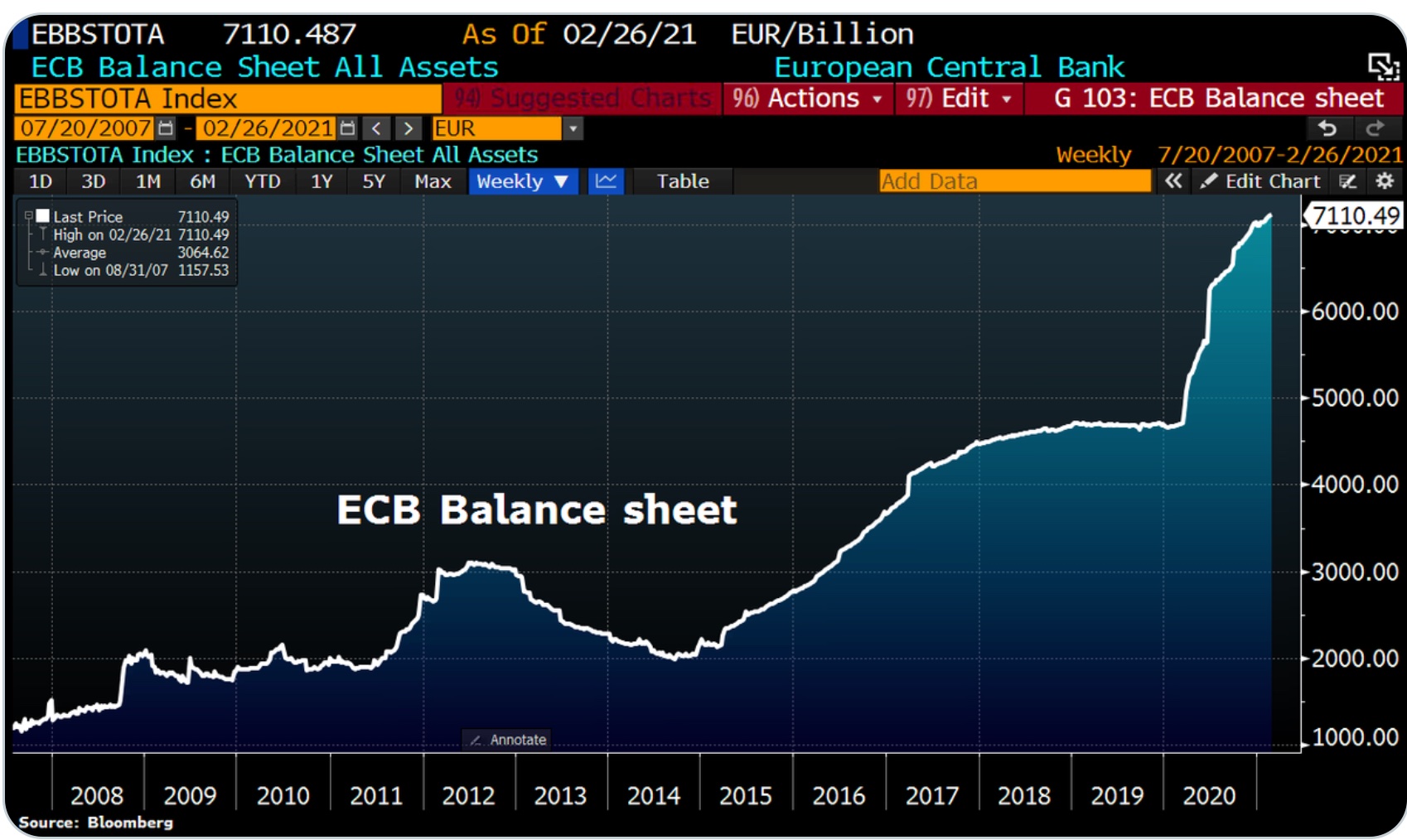 Hmmm
Holger Zschaepitz:  HMMM?! ECB’s Luis de Guindos says it’ll be key to understand whether bond yields have risen due to inflation trends or due to other factors, though in any case officials “have the flexibility that is needed in order to react.” Officials totally open to recalibrating PEPP envelope (see chart below).

INTEREST RATE INTERVENTION:
Officials “have the flexibility that is needed to react.” 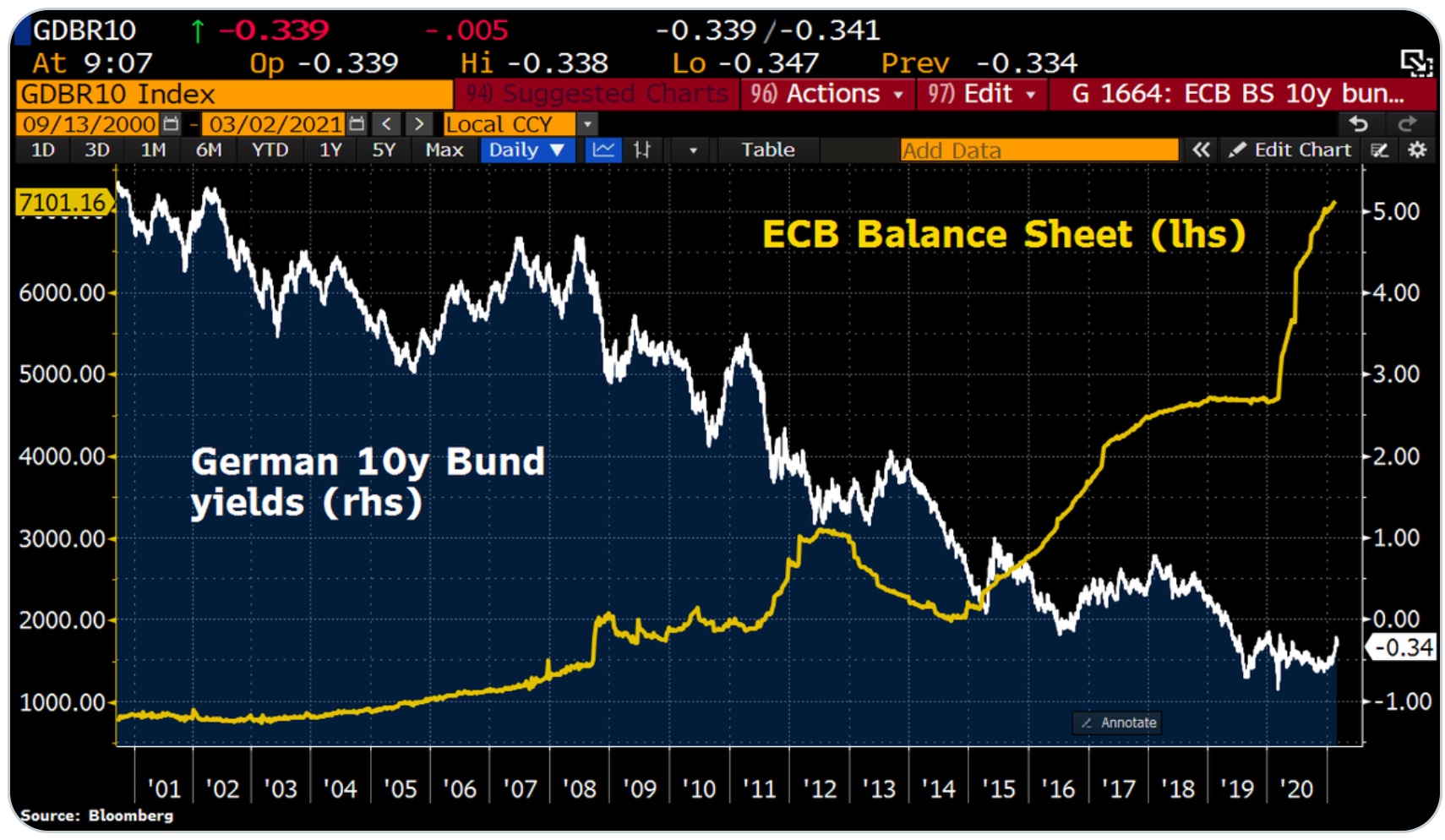 “The harder we push to close the output and inflation gaps, the better the outlook for the euro area economy. And the faster we get there, the stronger our growth potential will be.”

ICE-AGE: Expect Sub-Zero 10-Year US Treasury
Albert Edwards, Former Global Strategist Societe Generale:  “Although I think we will ultimately move away from the Ice Age deflationary quagmire, the reflation trade has gone too far, too soon. After a now fully discounted H1 GDP boom, a growth and Inflation slump towards the end of this year will likely trigger sub-zero US 10year (Treasury).”

Quote Of The Week
Luke Gromen:  “Selling gold on higher bond yields with sovereign debt levels this high is one of the most pronounced cases of “picking up nickels in front of a steamroller” I have seen in my 25-year career in finance.”

Zacatecas Silver starts trading today on the TSX Venture with the symbol ZAC. The company is unique as it had very strong funding as a private company, including from world-famous silver investor Eric Sprott, and there was no financing required concurrent with this go-public move. This bodes potentially extremely well for early buyers in the public market as the share structure has been kept very tight.

Top Tier Team
While Eric Sprott as an investor will put this new silver situation on the radar screen of many, the top tier management team behind Zacatecas Silver also carries some weight among serious silver investors. Some of these names are very familiar within the mining industry including CEO Bryan Slusarchuk, who is the co-founder and former President of K92 Mining, COO Dr. Chris Wilson who is a very successful geologist formerly with mining behemoth Ivanhoe Mines, Director John Lewins, the CEO of K92 who has turned K92 into one of the fastest growing gold companies on the planet, and Chairman James Hutton who was CEO of Canada Dominion Resources and President of CMP Resources Group that jointly completed in excess of $1.4 Billion in financings for the Canadian resource industry.

The Project that Brought Them all Together
To get this storied group of mine builders and exploration professionals together along with backing from Eric Sprott takes an amazing project and that is exactly what Zacatecas Silver has put together. As has been a hallmark of this group, the assets were acquired when silver was out of favor.

Resource Confirmation, Resource Expansion and Exploration Provides a Trifecta of Opportunity
Zacatecas Silver has a significant historic inferred silver resource in a world class silver mining region which is open along strike and at depth, with work starting immediately to target resource confirmation and expansion at the Panuco Silver Deposit. In addition, the company has excellent regional exploration potential including El Cristo, the northwest extension of the well-known Veta Grande Vein that has now been traced on the Zacatecas Silver properties for 3km at surface but has had very limited previous exploration.

The Zacatecas Silver property is located in Zacatecas State, Mexico, within the highly prospective Fresnillo Silver Belt, which has produced over 6.2 billion ounces of silver. The company holds a huge 19,338 acres of ground that is 25 km south-east of MAG Silver Corp.’s Juanicipio Mine and Fresnillo PLC’s Fresnillo Mine. The property shares common boundaries with Pan American Silver Corp. claims and El Orito which is owned by Endeavour Silver.

“We have been blessed to have some great exploration success around the world over the past several years. To acquire these silver assets when silver was disliked by most companies and now to launch publicly right when silver seems on the cusp of a breakout higher is great timing. We feel fortunate to have this silver land position and equally blessed to have attracted such great financial backing by such serious world class silver investors.”