Today the selloff in the gold market is accelerating as the price of gold has tumbled below $1,470 but here is the bright spot, plus we won’t see this again for a long time.

Gold Selloff Accelerates
November 7 (King World News) – Peter Schiff:  “Gold is selling off on the prospects of the trade war ending. But it’s not the trade war, but the war on savings waged by central banks that is behind gold’s rise. Future U.S. trade & budget deficits will now be larger than ever, making gold ownership more important than ever!”

BRIGHT SPOT: Mining Shares vs Gold
King World News note:  The mining shares have continued to remain relatively firm during this selloff in the gold market.  The XAU dips in price but not much in percentage terms.  This has to do with the fact that the XAU (Gold Mining Stock Index) vs Gold ratio remains near historic all-time lows (see below). 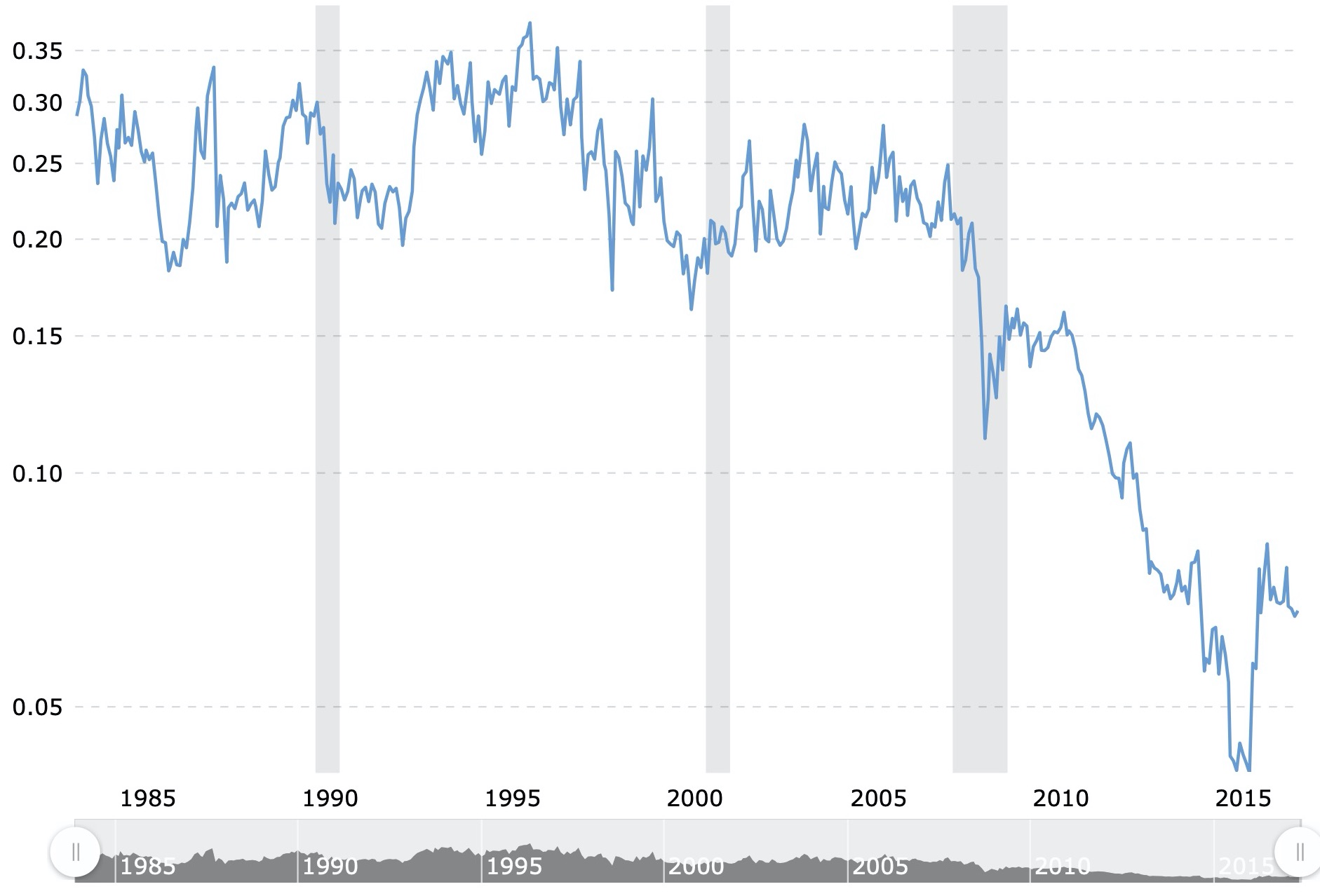 US/China Tariffs
Peter Boockvar:  “I’m encouraged to hear that the US/China have laid out a path to rolling back the existing tariffs in addition to not implementing the December 15th ones. But, all we’ve heard from on this is from the Chinese Ministry of Commerce, not any US official. Thus, details are scant on what the process and enforcement would be on eliminating in tranches the current tariffs on Chinese imports and no timetable was mentioned. Hopefully we’ll hear more today. I will say this, China seems to be digging in with its demands that without a rollback of tariffs, there is no deal.

Won’t See This Again For A Long Time
Yields are jumping in response around the world. The 10 yr JGB yield rose another 1.5 bps and is getting near zero again at -.06%. The French 10 yr yield is back above zero, up 5.5 bps to +.02%, the highest since July. The German 10 yr yield is up by 6 bps to -.27% and whose yield is up from a low of -.52% on the day the ECB announced even more NIRP and QE (thus, not working in keeping rates down) and way off the early September low of -.74%. The US 10 yr yield in sympathy is rising 5 bps to 1.88%, just below the highest since August 1st. A 2% yield seems to be where it’s going in the short term. I’ll emphasize again that the global rate environment has changed notably and I still believe we’ll look back on those August yields and the $17 Trillion of negative yielding securities at the time as something we won’t see for a long time…

European bank stocks are cheering the rise in rates with a 2.2% rise, the 5th straight day of gains. The index is at the highest since May. Many of these bank stocks are trading well below book value so there is further room to go here.

On the China story, also moving higher is the yuan where the offshore rate is jumping by .6% to the highest level vs the dollar since August 2nd. Copper is up by 1.3% to match the best level since late July. They’ve pretty much have moved hand in hand over the past year.

Sentiment
We’ve seen sentiment figures this week get very stretched to the bull side and today’s AAII is another indicator pointing to that. Bulls rose to 40.3, the highest since early May, up 6.3 pts w/o/w. Bears fell to 23.9, down 4.5 pts on the week and that is the least since early May. Thus, while we hopefully will get good trade deal news, there already is plenty of market giddiness.

Economic data wise was quiet overseas. After the upside seen in yesterday’s German factory orders number for September, today’s industrial production figure was about as expected. It was still down 4.3% y/o/y led lower by manufacturing. The Economy Ministry said “The weakness in industry is not yet overcome. But the recent slight improvement in orders and business expectations brightened the outlook for the fourth quarter somewhat.” The euro is up slightly and the DAX is outperforming other European bourses.

Brexit
The BoE left rates unchanged as expected but two members voted for a cut from the current rate of .75%. What they think that would accomplish is beyond me, especially now that a clean Brexit is upon us. The pound is lower on the dissents but I don’t expect a rate cut anytime soon because Brexit will likely be resolved soon.