On the heels of some wild trading to kickoff this week, expect big upside moves in the gold market to continue, plus here is a look at some of the insanity and the chart of the day.

The Objective Is Control
August 6 (King World News) – Daniel Lacalle, Chief Economist at Tressis:  “Why would a country pursue a currency war when its government knows it will disproportionately hurt the poor, savers, real salaries, and access to goods and services of its citizens? Because the objective is not growth or welfare, but control.”

Insanity
Holger Zschaepitz:  “For the first time ever, mortgage bonds are being sold at a negative rate. Average Danes and Germans will borrow at rates far lower than those at which the U.S. government can sell its debt. (See below). 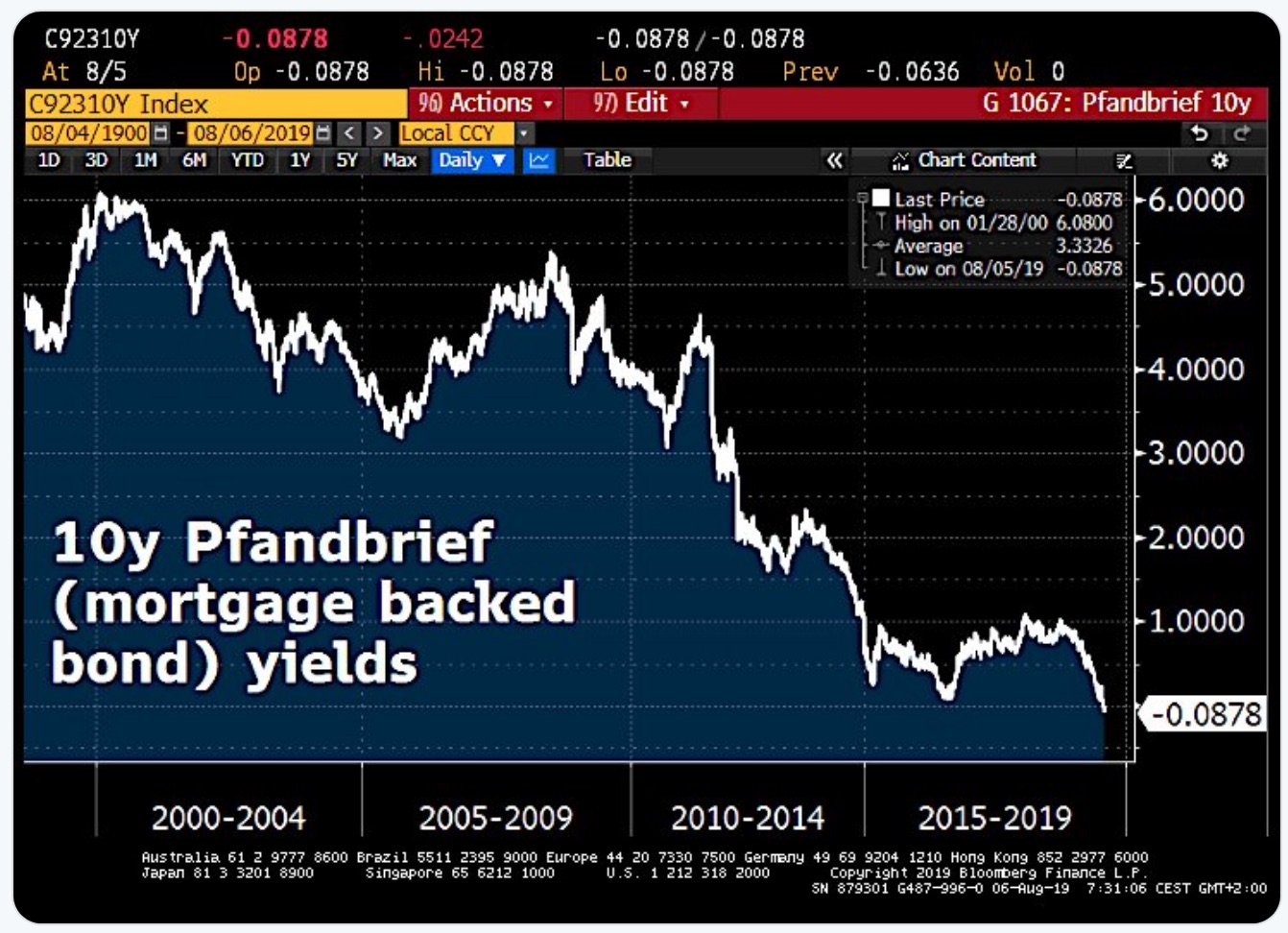 Interest Rates Falling Fast Everywhere
Jeff Snider at Alhambra Partners:  “What’s interesting is not that bond yields are falling here or there, but that they are falling everywhere. Fast. JGB 10s not far from record lows. German 10s already there, and then some. UST’s just a few dozen bps above theirs. All moving together. No one is impressed by rate cut. End of QT hasn’t made any difference, either. (See below).

Global Collapse In Interest Rates Is Happening Across The Board 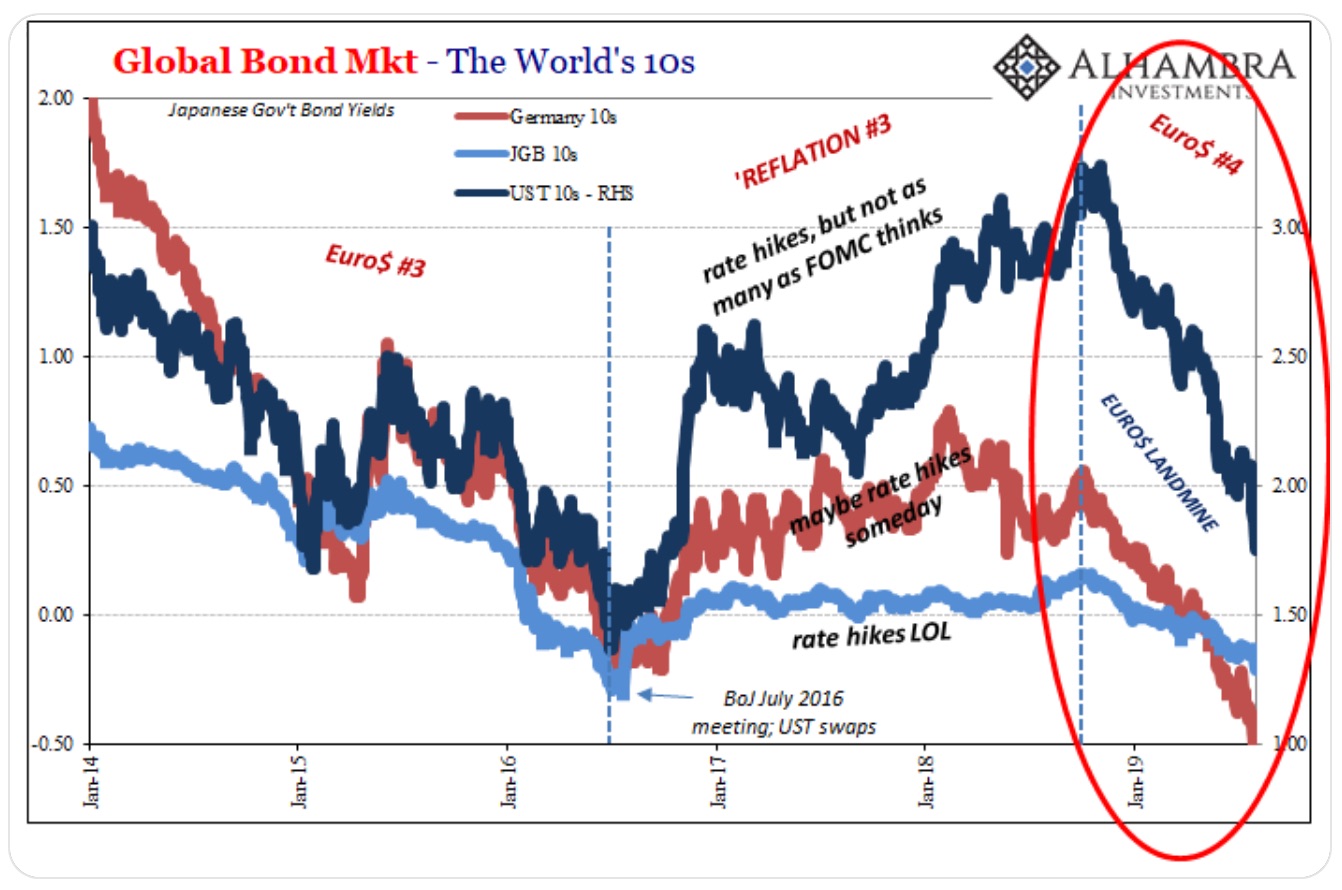 Interest Rates Are Going A Lot Lower In The Coming Year
Tom McClellan:  “Some on the FOMC think that one quarter point cut is all they are going to do. They are wrong. Eurodollar (interest rate) futures’ COT data say rates are going a lot lower over next 10 months. (See below).

Interest Rate Cuts Will Continue Over Next 10 Months 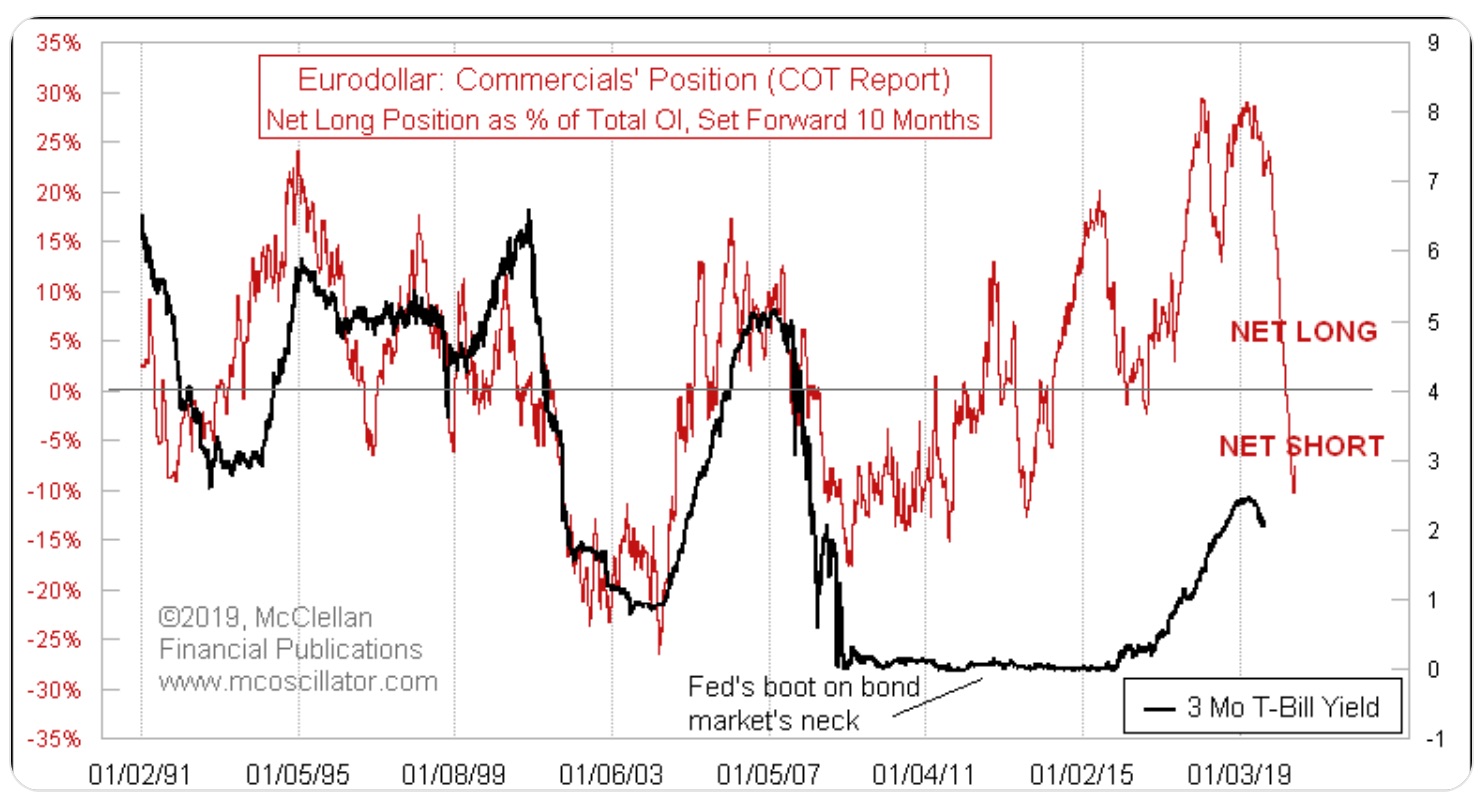 Going For The Gold
Graddhy out of Sweden:  “I suspected that consolidation formation was a bullish rising wedge and therefore also a running correction, and so it was. We are now well into my thin zone between 1400/20-1550/80. We are also on track with completing my long standing symmetry move on my weekly. (See charts below). 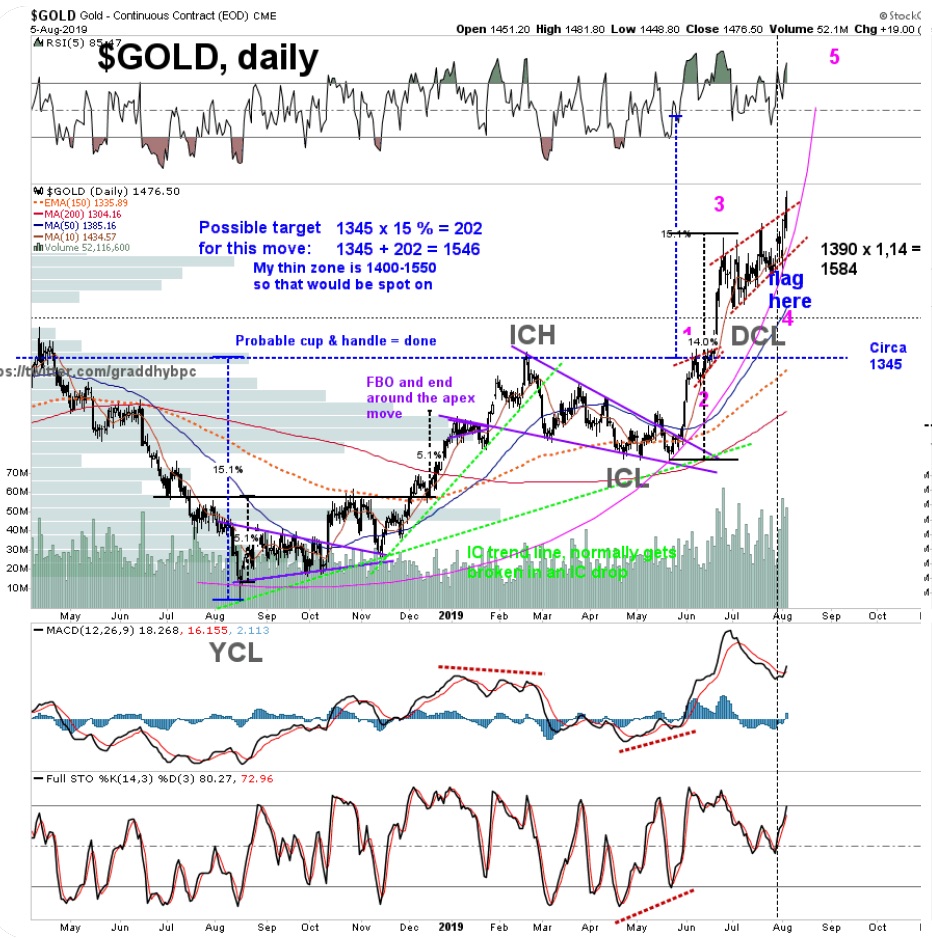 Massive Cup & Handle May Form In The Gold Market 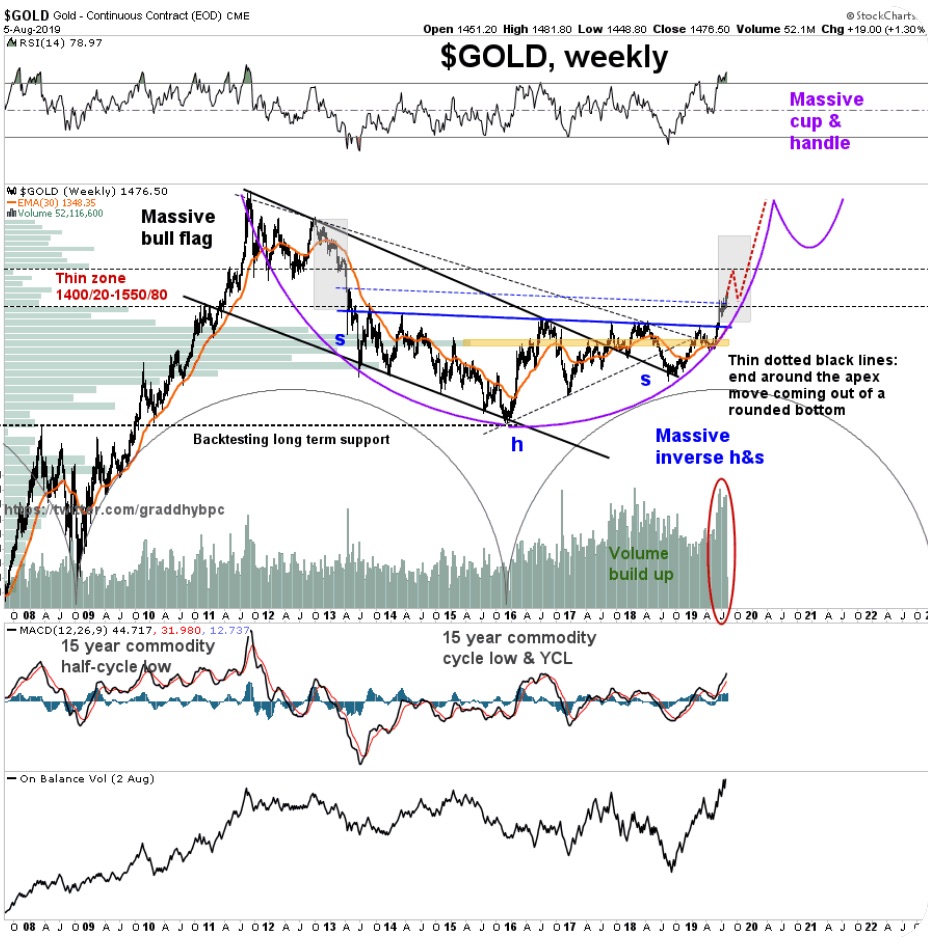 And finally, a chart of the performance of gold in global currencies. Check out 2019: 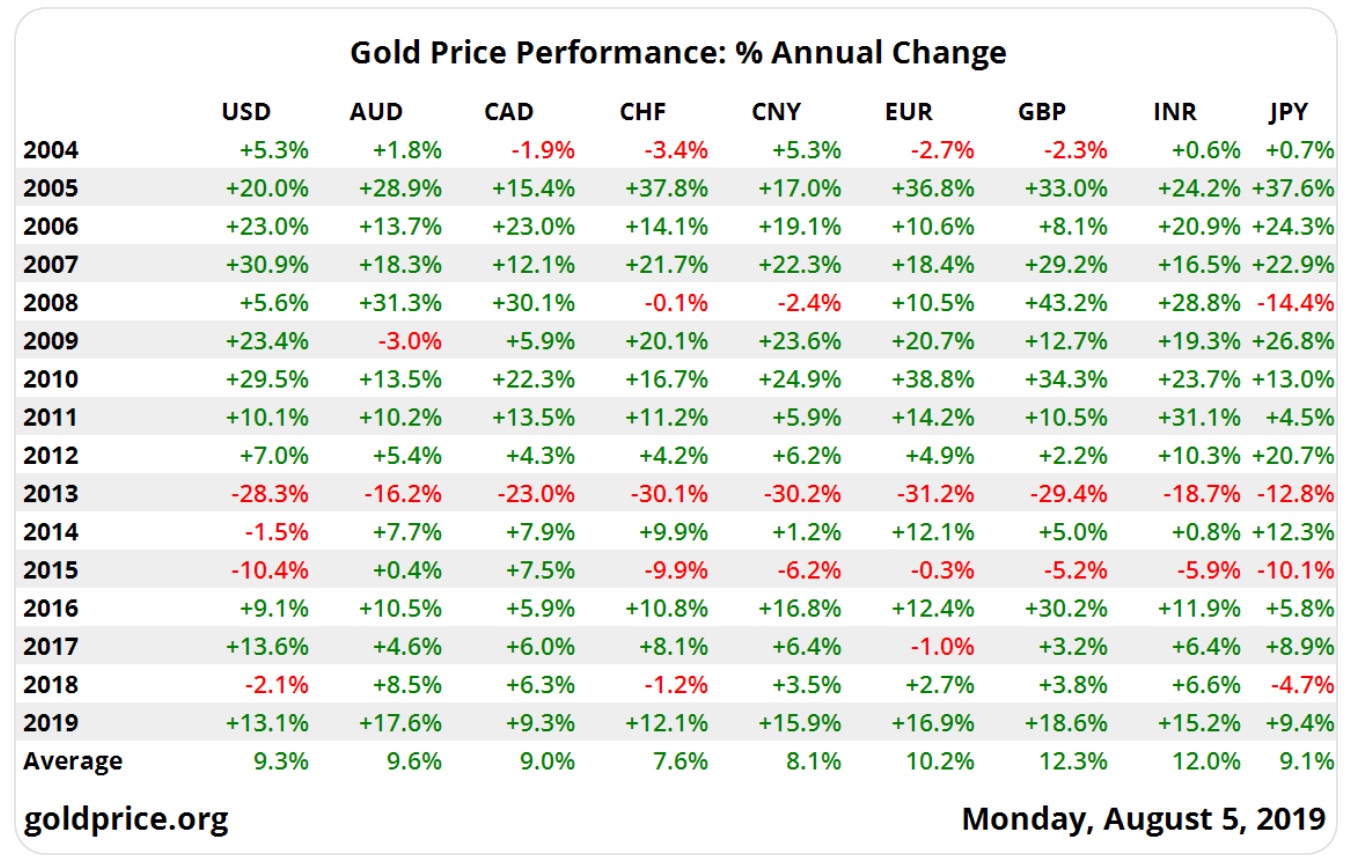 As Dow Plunges 600 And Gold Surges $30, This Is Truly Amazing CLICK HERE TO READ

Time For Some Good News, Uh-Oh, And Wrong Turn CLICK HERE TO READ