Gold is the only truly safe holding in this environment, plus this will be extremely bullish for silver.

Gold
March 16 (King World News) – Graddhy out of Sweden:  The Gold 8 year cycle is the largest, established long cycle for gold. Last 8 year cycle low was 2016, next will be around 2024. It has followed my expected route for a very long time now. The big picture … my gold 8 year cycle roadmap. 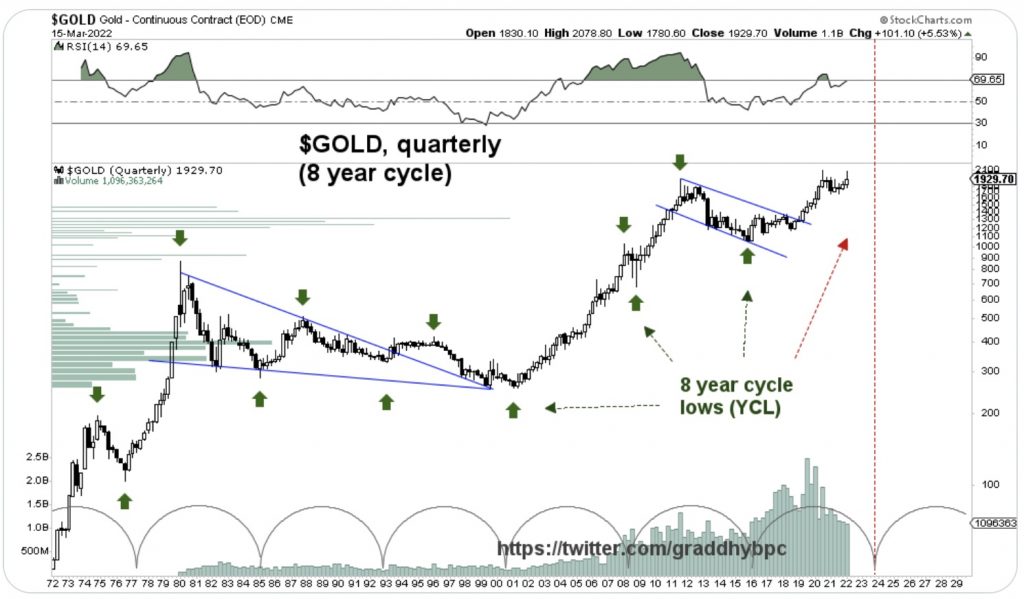 Again…Good Luck Solving That
Garic Moran:  As a reminder, the FED does not have a tool which fights inflation and supports financial assets at all costs. 10 years of extraordinary easy monetary policy has led to the biggest bubble in US history. The FED must pop the bubble or inflation will continue to rise: 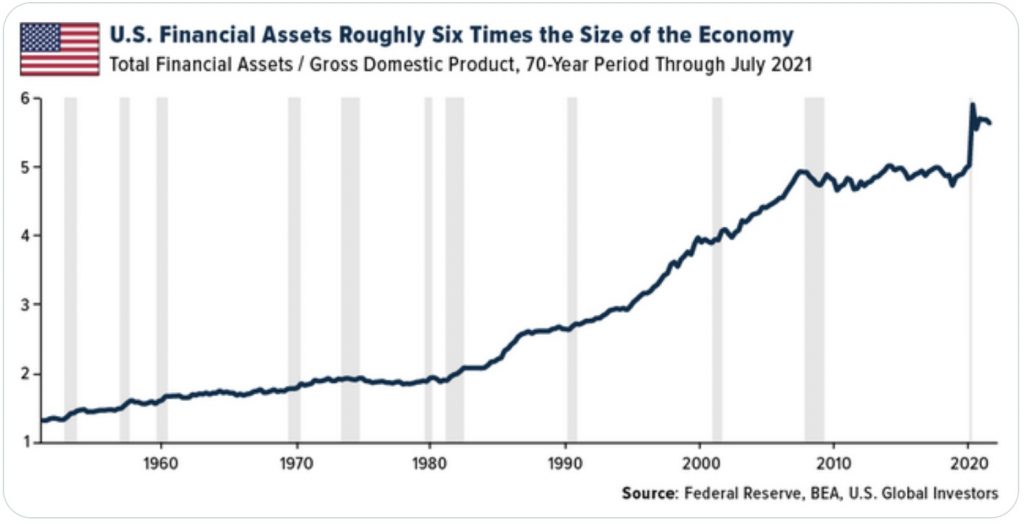 Silver
James Turk:  Chart shows why silver traders have been chopped up in this $28-$22 trading range. But it’s been a great time to accumulate physical metal. Has sub$24 closed for good & is sub$25 closing b/c of inflation? Is silver’s long-term uptrend ready to resume by hurdling $28? 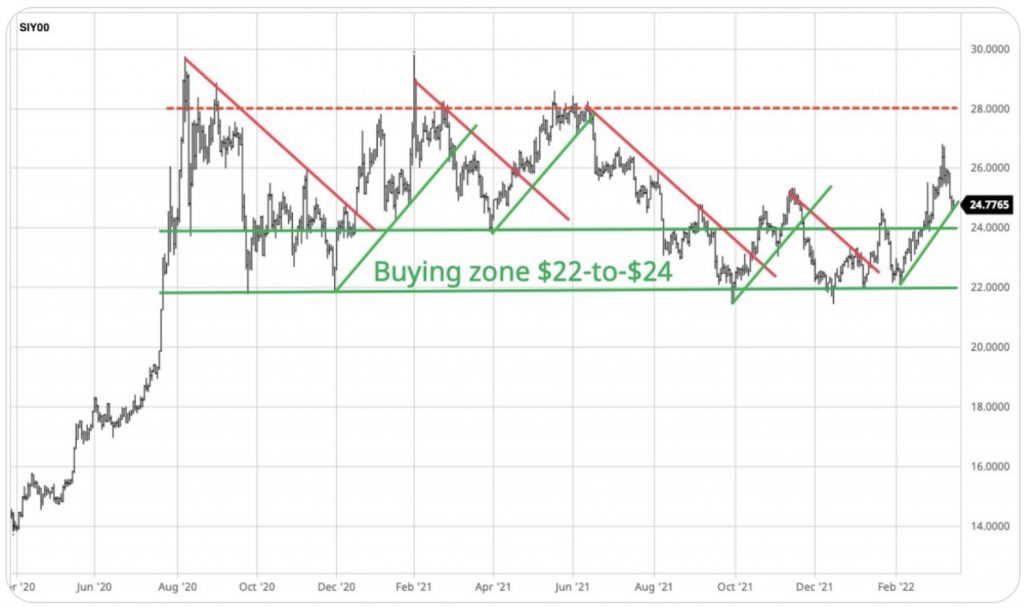 Gold Is The Only Truly Safe Holding
Peter Boockvar:  With no central bank FX reserve safe anymore when denominated in someone else’s currency and gold the only truly safe holding, the monthly US Treasury International Capital data will become ever more important to watch to see if foreigners start lightening up on US Treasuries and start parking some of this money elsewhere. When reported it is somewhat dated so we’ll have to be patient to see the post invasion stats. Last night the January numbers came out and foreigners bought a net $74.4b of US notes and bonds.

This follows buying of $81.2b in all of 2021 after six years of large net selling on balance. A lot of that money though might have come out of US stocks as the stock market selloff in January resulted in foreign net selling of US stocks of $50.1b. Japan and China, the two largest holders of US Treasuries added to their holdings. Europe in the aggregate too was a net buyer. Bottom line, the coming few months and quarters will be really important to watch, especially as the Fed is no longer adding to its balance sheet and soon will be shrinking it…

Thanks for the reminder from my friend David Rosenberg who posted this yesterday, it is the updated Fed’s flow of funds chart highlighting household net worth as a percent of disposable income. It is the ultimate visual of the asset price inflation the Fed helped to stoke relative to the actual economy, with disposable income the proxy. At the end of Q4 it reached 825% vs 650% in Q4 2006 at the peak of the housing bubble and was at 615% in Q1 2000 as tech stocks reached its epic top. 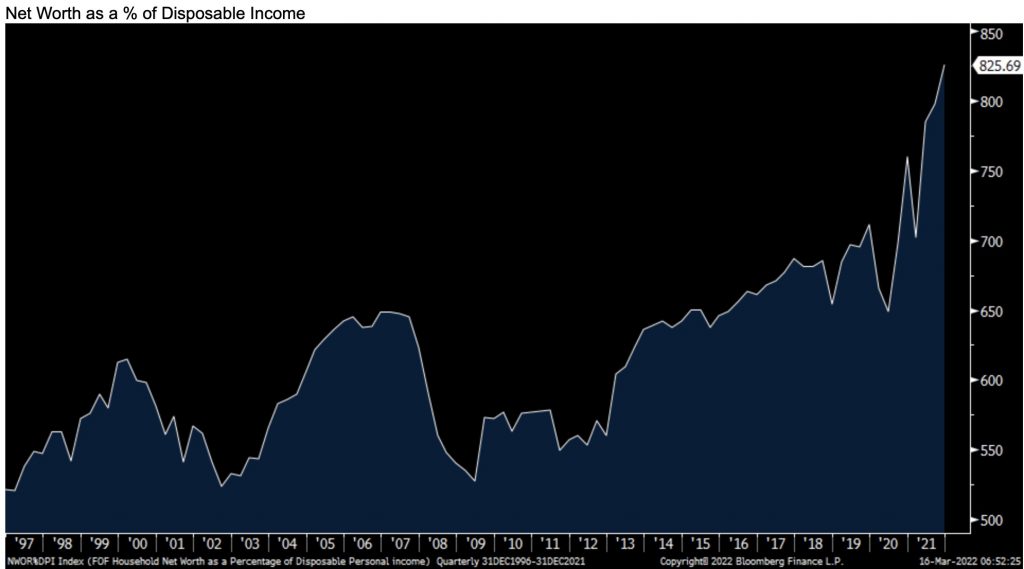 True Bear Market
I said yesterday that the waterfall decline in the Hang Seng index usually typifies the end of a bear market fall and we’ll see if that’s right after a meeting of China’s financial policy committee led by Vice Premier Liu He that resulted in some conciliatory comments in a statement about markets and the regulatory quagmire they’ve put big tech through. The Hang Seng rallied by 9% and the H share index spiked by 12.5%. The Hang Seng tech index was up by 22% and got back the selling of the prior two days. When looking out in coming years, I remain very bullish on many Asian markets and plenty of babies in Hong Kong were thrown out with the bath water too.

Maybe this story from Reuters sharpened their minds on the regulatory nightmare that they’ve put their most successful tech companies through. According to sources, “Alibaba and Tencent Holdings are preparing to cut tens of thousands of jobs combined this year in one of their biggest layoff rounds as the internet firms try to cope with China’s sweeping regulatory crackdown.” In that policy statement it did say that this crackdown should be done “as soon as possible” and that regulation “should be standardized, transparent and predictable.” Predictable it certainly hasn’t been. It also said they are working towards an agreement with US authorities and meeting the US listing rules. We’ll see.

Also helping the mood, Foxconn was allowed to reopen its Shenzhen facilities as long as they create a bubble type environment.

Real Estate
The average 30 yr mortgage rate jumped to 4.27% according to the Mortgage Bankers Association, up from 4.09% last week and 4.15% in the week prior. Refi’s fell 2.8% w/o/w and are down 49% y/o/y in response. Purchases though hung in there as they were up a touch, by .7%, though are still down 8.4% y/o/y. With sharp home price gains and now the jump in mortgage rates, affordable challenges become ever more a problem.

But, if you want to go rent a single family home instead, you’ll have to pay up by 12.6% y/o/y according to CoreLogic’s Single Family Rent Index which was out yesterday. Rent growth in Orlando was 20% and in Phoenix prices jumped by 19%.