Today the man who has become legendary for his predictions on QE, historic moves in currencies, and major global events warned KWN that the world is now on the edge of massive financial destruction and total chaos.

Secular bull markets are tough old beasts to kill, especially when the bull is stuffed full of paper. This bull paper feed is a novel idea and such a simple method for keeping a bull happy. What the producers of the feed (the Federal Reserve and other central banks) don’t realize is that the paper might make the bull fat and thus content temporarily, but eventually a bull full of paper will burst and collapse…

A final hyperinflationary top in stocks

So that will be the final destiny of all stock markets that are fueled by the central bank printing presses. They will die of indigestion from all the paper money that has been created to prop up the markets in the most unhealthy and artificial manner. Of course it is always possible that a last and desperate attempt of global money printing to save a debt infested world will lead to a hyperinflationary final top of stock markets. But as in all cases of hyperinflation, that would be a temporary move up of markets that will soon reverse into a collapse.

If we would see a last push up of markets due to money printing, gold would move a lot faster than stocks.

The Dow topped against gold in 1999. Since then we have seen a big move down to August 2011 when gold had a temporary peak of $1,920. Gold has since moved down to around $1,070 today. But even with this major down move in gold, the Dow-gold ratio is still down 63 percent since 1999. The correction up in the ratio is a mere 25 percent of the whole move since 1999. This is a very small retracement following such a big fall.

As shown in the monthly chart below, the move since the 2009 and 2011 bottoms has been quite weak and corrective and shows bearish divergences on the momentum indicators. We might see a move up to the top of the channel or even to the 38 percent correction level. But in 2016 the Dow-gold ratio should resume its downtrend. 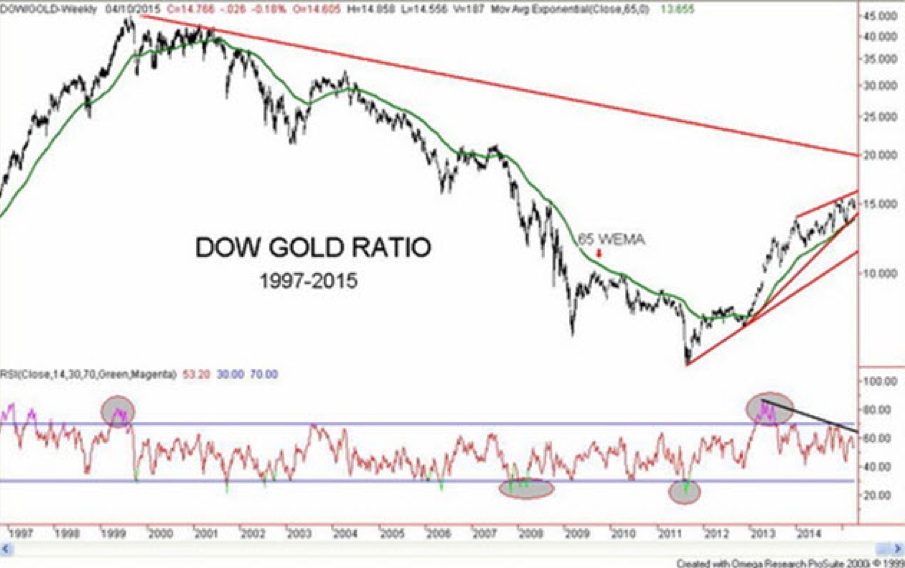 To get a better understanding of what will happen to the stock market in relation to gold in coming years, we must look at the 200-year chart of the Dow vs. gold.

What is certain is that gold will at least maintain purchasing power and probably much more than that. 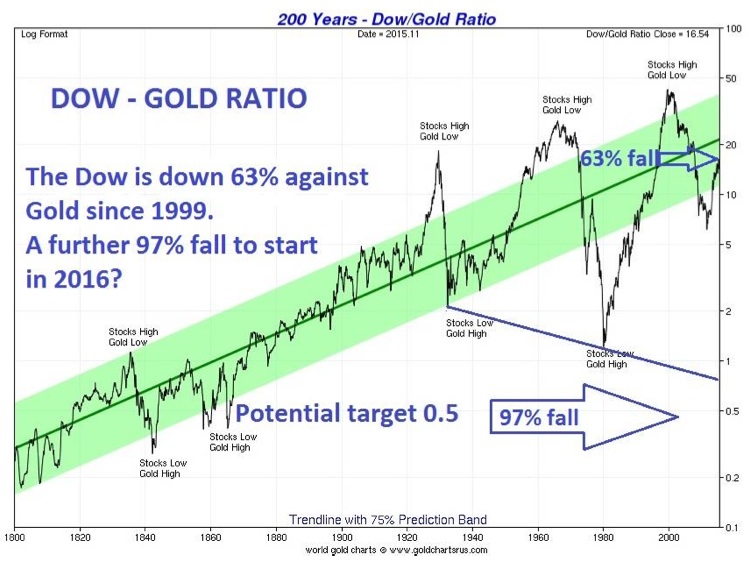 Unprecedented money printing by the Fed, European Central Bank, Bank of Japan, Bank of Canada, International Monetary Fund, and others is guaranteed. There are global debts of $225 trillion and derivatives of $1.5 quadrillion that can never be repaid with real money. With interest rates at zero or even negative, central banks have run out of tools to save the world economy. The only thing they have left is money printing, though they probably know that this will have no effect because you cannot create wealth with worthless pieces of paper. If that was the case we should all stop working and just print. But of course that would be excruciatingly boring.

Desperate people will nevertheless take desperate measures and this is why central bankers will print, hoping to kick the can down the road for a while. But this time they will fail.

In real terms I would not be surprised to see stocks worldwide lose at least 90 percent and gold go up by 1,000 percent, both in today’s money. I know that this sounds unrealistic to most people. But we must understand is that the last hundred years, since the creation of the Fed, have also been totally unreal. Unthinkable wealth has been created for an elite and debt that can never be repaid is the burden of the masses. Since unreal situations never last, even this one will come to an end too.

I do admit that central banks have kept the circus going a lot longer than many of us could have imagined. Secular bulls are not killed easily. They do go out with a bang. And that is what is happening right now.

The end of an era

Yes, this money-printing bonanza will soon come to a tragic end. Due to the massive bubbles created worldwide, there will be a lot of suffering as the world financial system and economy implode. We are also facing massive geopolitical problems that could lead to major wars, even a nuclear war. There will be wealth destruction never experienced before.

Just as in the last 5,000 years, physical gold will give protection against this. But there are many other things that are important to plan for besides the protection of assets. Most important is of course to help family and friends during the coming tumultuous times. ***To listen to the man who has become legendary for his predictions on QE, historic moves in currencies, and major global events, Egon von Greyerz CLICK HERE OR ON THE IMAGE BELOW.

***To listen to one of the most extraordinary interviews ever with Dr. Paul Craig Roberts CLICK HERE OR ON THE IMAGE BELOW.

One Of The Most Remarkable Silver Charts Of 2021!