Here is a look at gold in a paper storm as fear and inflation begin to grip the world.

Fear and Inflation—The Timeless Policy Tools of Discredited Systems
December 7 (King World News) – Matthew Piepenburg at Matterhorn Asset Management (based in Switzerland): If you’re wondering why the media, markets and mandates are making less sense despite a constant flow of hard facts contradicting their message, it’s critical to watch what is done rather than said by the policy makers behind the fear and inflation “new normal.”

Latest Fed-Speak Translation: From “Transitory” to “Persistent” Inflation
To the extent there’s anything exciting about Jerome Powell, he was at least able to drop some bombshells at his November 30th meeting before Congress, including a truly cutting-edge observation that inflation forces are “more persistent” and that it’s now time to retire the word “transitory” regarding the same.

Well, Jerome, we could have told you that long, long ago, but this, of course, is no shocker…

More Taper-Talk (Distraction)
Perhaps more “exciting” was his not-so-subtle announcement that the Fed plans to begin a discussion at its next meeting to accelerate the Fed taper by a few months.

Despite the fact that any Fed Taper will in substance be a “non-taper” given backdoor liquidity tricks from the Standing Rep Facility and FIMA swap lines, the optics of such continued taper-talk will be negative for almost all assets save for the USD, the VIX trade, so-called “safe-haven” Treasuries and possibly gold.

Bitcoin’s Troubles
Needless to say, BTC didn’t respond too well, dropping by 20% in the wake of Powell’s double-speak; as of this writing, it rose by 9% in less than 24 hours.

Such dramatic price swings, in our opinion, confirm that cryptos (despite “consolidation” and “adoption” pains) will never be stores of value but rather volatile (and yes, exciting) speculation assets—though we know the crypto circles (who will likely also ignore recent warnings [raised by David Goldman] of quantum hacker risks) will strongly disagree.

Luckily, physical gold can’t be clicked away by a quantum mouse click, but we have spoken elsewhere of why the Bitcoin/Gold debate is really no debate at all…

The Treasury Market’s Bigger Troubles
Longer term, however, there is very good reason to worry about the $22T Treasury market should the Fed begin reducing portions of its $80B per month of UST support in a backdrop of steady and now undeniably “persistent” inflation.

As we noted last week, the Treasury market, with less Fed “accommodation,” is not nearly as liquid as the Fed would otherwise wish you to believe.

In short, if stocks and bonds begin to fall in concert, as is likely, such malfunctioning of an otherwise rigged securities market will get harder to contain without a quick reversal of the “forward-guided” taper strategy signaled by Powell.

Even the best rated corporate bonds lost 2% in the last 60 days as sell-offs continue, pushing yields up as dollar liquidity in the C-suites gets harder to come by.

For now, of course, everything about the ever-supported (and hence ever-rising and rigged) stock market is a screaming indicator of record-high over-valuation by every metric.

As the chart below confirms, the S&P is in an historically record-breaking red-zone of risk, kept alive solely by favorable (green zone) Fed support and hence repressed yields (costs of debt).

Do you see how important the “accommodated” bond market is to the equity market farce? Do you see how debt, and debt alone, is what keeps this failed system running? 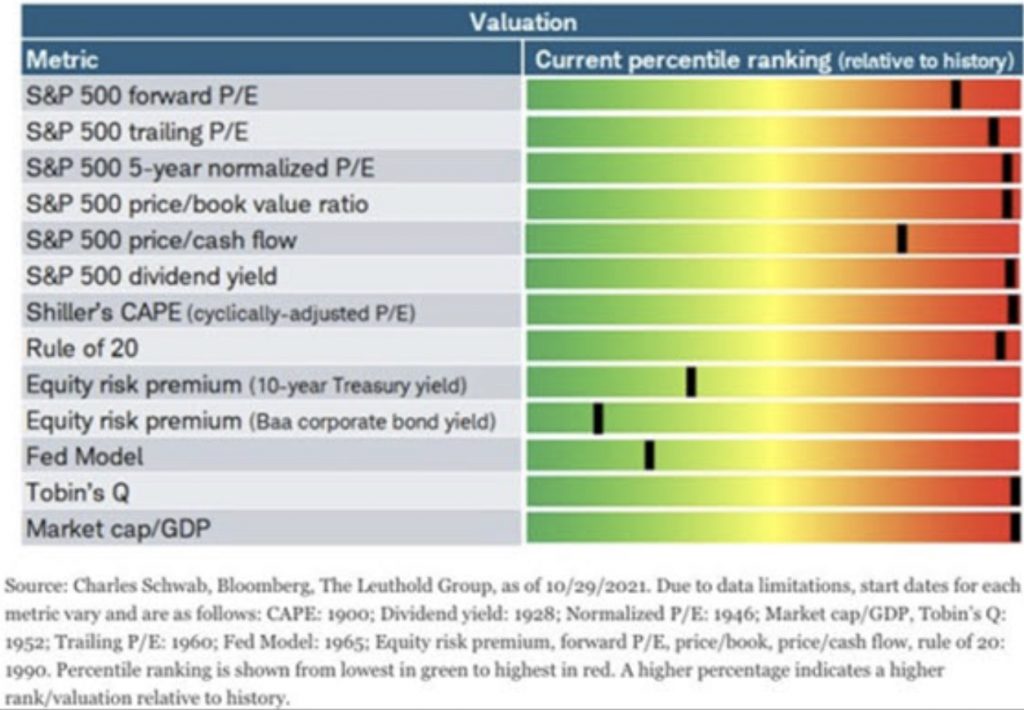 Debt Levels Make Failed Policy Forecasting Easy (and Desperate)
As we’ve warned for years, “The debt market is the thing,” and rising rates will create all kinds of painful ripple effects in a global financial system driven more by IOU’s than GDP’s.

Placing this stark reality into the context/example of the proxy U.S. economic narrative (with a debt to GDP ratio at 125%), the Fed will soon discover that the only way it can avoid default and pay interest expenses on Uncle Sam’s shameless bar tab is to eventually reverse course on the taper.

Far more importantly, however, is the unspoken fact that inflation is the Fed’s best friend, as it effectively de-levers public debt as the last desperate tool (and symptom) of a failed monetary experiment.

Again: Watch what policy makers do, not what they say.

In other words: They want inflation. They need inflation. Meanwhile, they pretend to vocally “combat” it…

This is because the only way to avoid Treasury or entitlement defaults (in a context where true interest expense on government debt is 111% of tax receipts) or to stimulate more GDP is via more inflation, which means higher infrastructure and commodity prices down the road.

A Warning to Dreamers Who Feel Debt Doesn’t Matter
Despite the lessons of both history and math which consistently confirm the deadly effects of debt on national survival and national currencies, the delusional faith in leadership, adjectives and political warm and fuzzy remains a human, all too human comfort.

Nearly every defense given by such delusional dreamers, of course, is the example of Japan, whose debt to GDP defies belief and yet whose inflation levels have been contained.

In other words, if Japan can do it, so can Uncle Sam, right?

What such dreamers ignore, is that when it comes to fiscal budgets and national debt, Japan and the U.S. could not be more different.

Unlike the U.S., Japan has a current account surplus and a Net International Investment Position (NIIP) of +66% of GDP, which means the value of its foreign assets against its foreign liabilities is highly positive.

The U.S., however, has a current account deficit and an NIIP that is highly negative at -70%.

Japan, moreover, funds its debt internally via citizen bond buyers, while the U.S. funds its debts externally by, who else: The Fed’s money printer.

Thus, based upon the hard math and stubborn history as to the lessons of nations under the boot of twin deficits, external funding and too much debt, the U.S. is far more reminiscent of Weimar Germany than modern Japan.

And so, we’ll say it again: The only way the land of the world’s reserve currency can avoid default is via the inflationary road of creating more fiat money (regardless of current taper talk) from an external source: namely from that parasitical monster (and private bank) otherwise known as the Federal Reserve.

Gold in a Paper Storm
Speaking of twin deficits, massive debt, external funding and inflation as policy rather than transitory myth (i.e., the Weimar/U.S. kinship), here’s another fun fact (and chart) compliments of Dan Oliver, who tracked the price of gold against Weimar’s paper Marks: 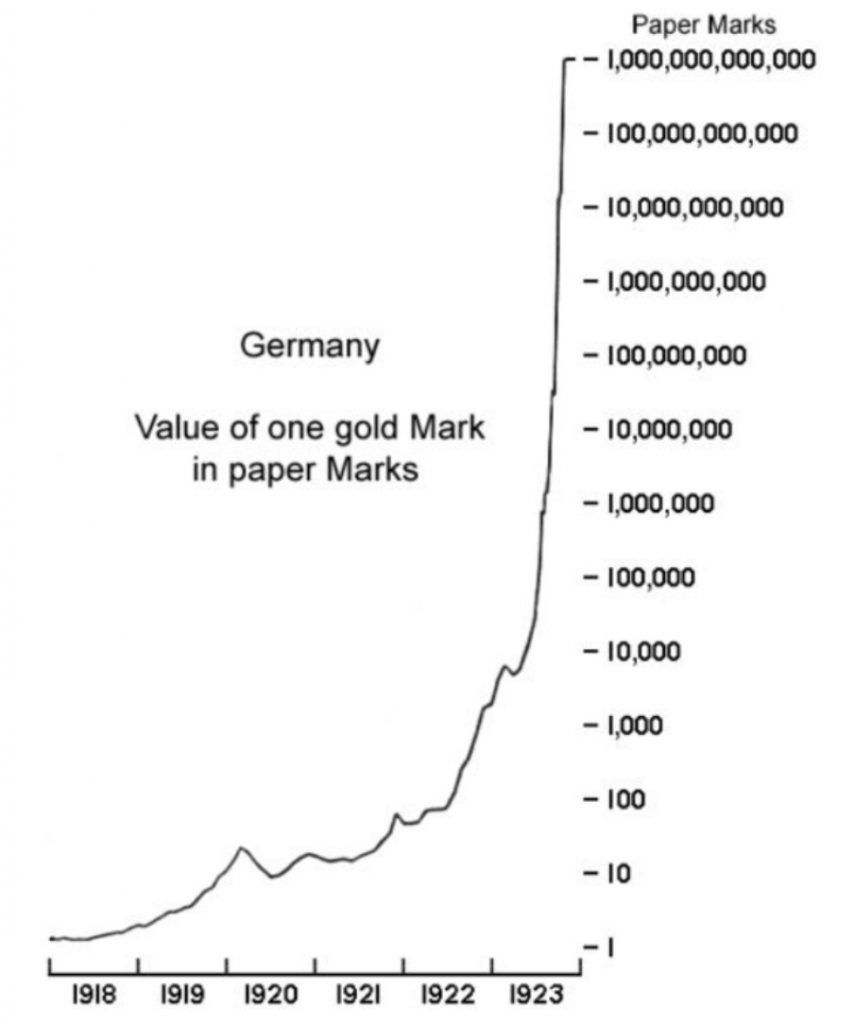 Ok, we know what everyone is saying and thinking: That could never happen again. Not now, and certainly not in the US of A.

Or even better, that’s just a fear-chart from gold bugs in Zurich.

We get it. The US of A is not Yugoslavia, Argentina or Venezuela, and it sure as heck isn’t Weimar, right? It’s also home of the world reserve currency, right?

And sure, we also know that today the Fed and other central and global banks have special magical powers as well as growing support, or talk of, a new Central Bank Digital Currency (CBDC) and a calm and orderly re-set down the road to prevent charts like the one above from every reoccurring, right?

We, in fact, have less faith in such an orderly reset or magical CBDC solution to paper currencies losing credibility by the second.

Perhaps we won’t see folks pushing wheelbarrows of cash down the street to buy butter and bread, but we do anticipate painful inflation and dramatic capital (as well as continued personal liberty) controls in the coming years (all, of course conveniently attributed to COVID yet due to profligate spending and central bank criminal negligence).

Same Symptoms, Different Disease
When systems break down throughout history, as the current systems clearly are, the powers-that-be have always preserved and exploited their comical reputations by employing two simple policies: 1) Inflate away their debt with crappy currencies and 2) control/distract their angry masses with fear and the threat of foreign or internal “enemies” rather than the criminals who lead them.

As we’ve said before, COVID has been a convenient narrative (as well as internal and external enemy) for the dark changes debated and endured by all of us, regardless of our individual political, viral or market views.

In Australia, for example, a few folks recently “escaped” from a COVID confinement camp and the net result was a media hysteria, police barricade and outlaw search reminiscent of the hunt for Jessie James (or for you Australians, Joseph B. Johns).

Meanwhile, the Omicron headlines, both inside and outside of Australia, continue to deliberately (and predictably) spread fear with the same political effect of the Bolshevik menace spreading through an otherwise broke and inflation-saturated Europe in the 1930’s.

In short, and when it comes to dying currencies and dying political credibility, be it from a parliament, White House or central bank, inflation, scape-goating and fear-mongering have always risen with eerie consistency and drastic results whenever the leaders who put their citizens in an economic hole are looking for an excuse to avoid accountability for the painful results.

Do you think the current moment in time is no different?

If not, prepare for more debased currencies and destroyed freedoms…This will link you directly to more fantastic articles from Egon von Greyerz and Matt Piepenburg CLICK HERE.