This is what really has gold and silver surging higher today.

May 14 (King World News) – Peter Boockvar:  What’s the definition of transitory? Well, in the just released UoM May consumer confidence number, one year inflation expectations jumped to 4.6% from 3.4% in April, matching the highest since 2008 and the 5-10 yr prediction (nonsense prediction that far out however), rose 4 tenths m/o/m to 3.1%, a 10 yr high. 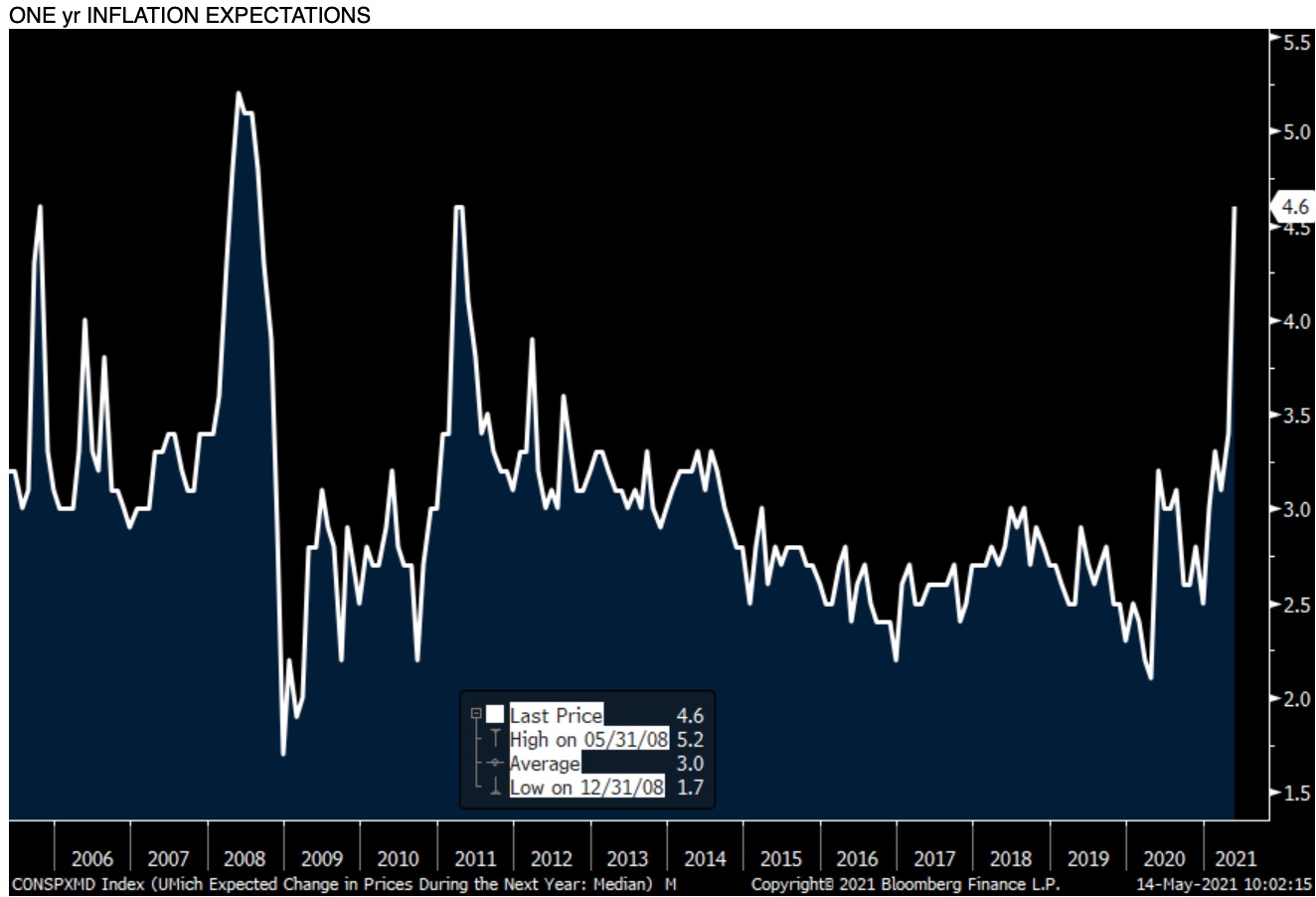 I don’t want to be premature here with the ‘stagflation’ word but it is the higher inflation expectations that we can cite as a reason for the drop in consumer confidence to 82.8 from 88.3 and below the estimate of 90. 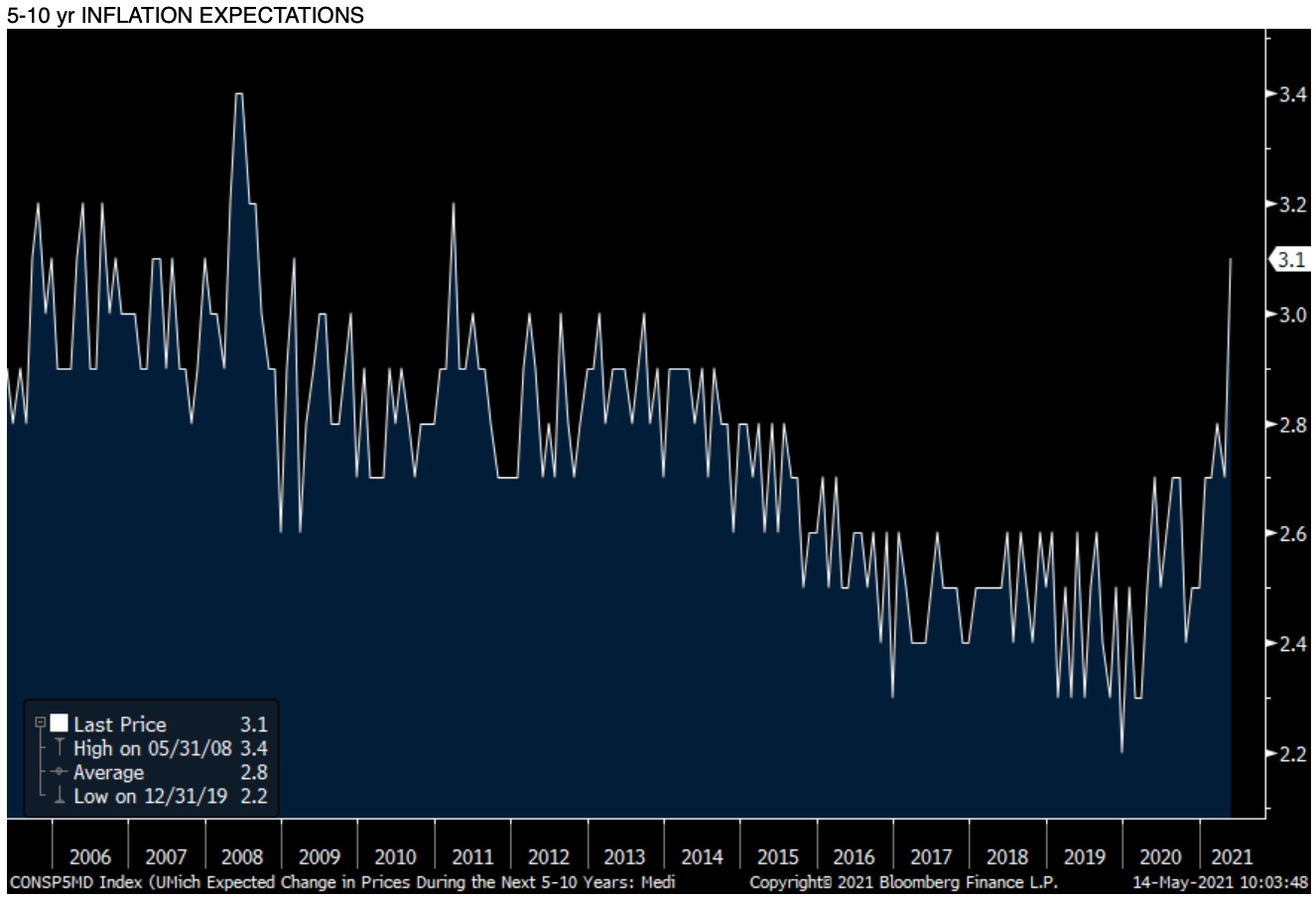 Last February the consumer index stood at 100 right before everything hit. Both Current Conditions and Expectation components were lower. The UoM specifically said:

“Consumer confidence in early May tumbled due to higher inflation…Rising inflation also meant that real income expectations were the weakest in five years. The average of net price mentions for buying conditions for homes, vehicles, and household durables were more negative than any time since the end of the last inflationary era in 1980.”

Also, expectations for higher gasoline prices rose to match the highest since 2011. Consumers are living rising inflation real time and no amount of economist talk about a wide output gap and citing a still high number of unemployed is going to change that. UoM did express confidence that consumer spending could overcome this but also said:

“This combination of persistent demand in the face of rising prices creates the potential for an inflationary psychology, fostering buy in advance rationales and cost of living increases in wages.”

They went on to say

“Policy commitments to establish full employment while allowing inflation to meaningfully rise have never been attempted with the additional micro goals of equity and fairness across of population subgroups.”

I say, there is nothing equitable and fair about rising inflation and a rising cost of living. As for the former, Arthur Burns and G. William Miller tried in the 1970’s to disastrous results.

Employment and income expectations were little changed, the latter in nominal terms as household finance expectations, as quoted above, fell.

On the inflation worries, expectations for rising ‘interest rates over the next 12 months’ jumped 6 pts m/o/m to the highest since January 2019.

To the quote above on how rising inflation expectations are impacting spending decisions, those that said it’s a good time to buy a car fell 16 pts m/o/m to the lowest since the recession in October 2008. 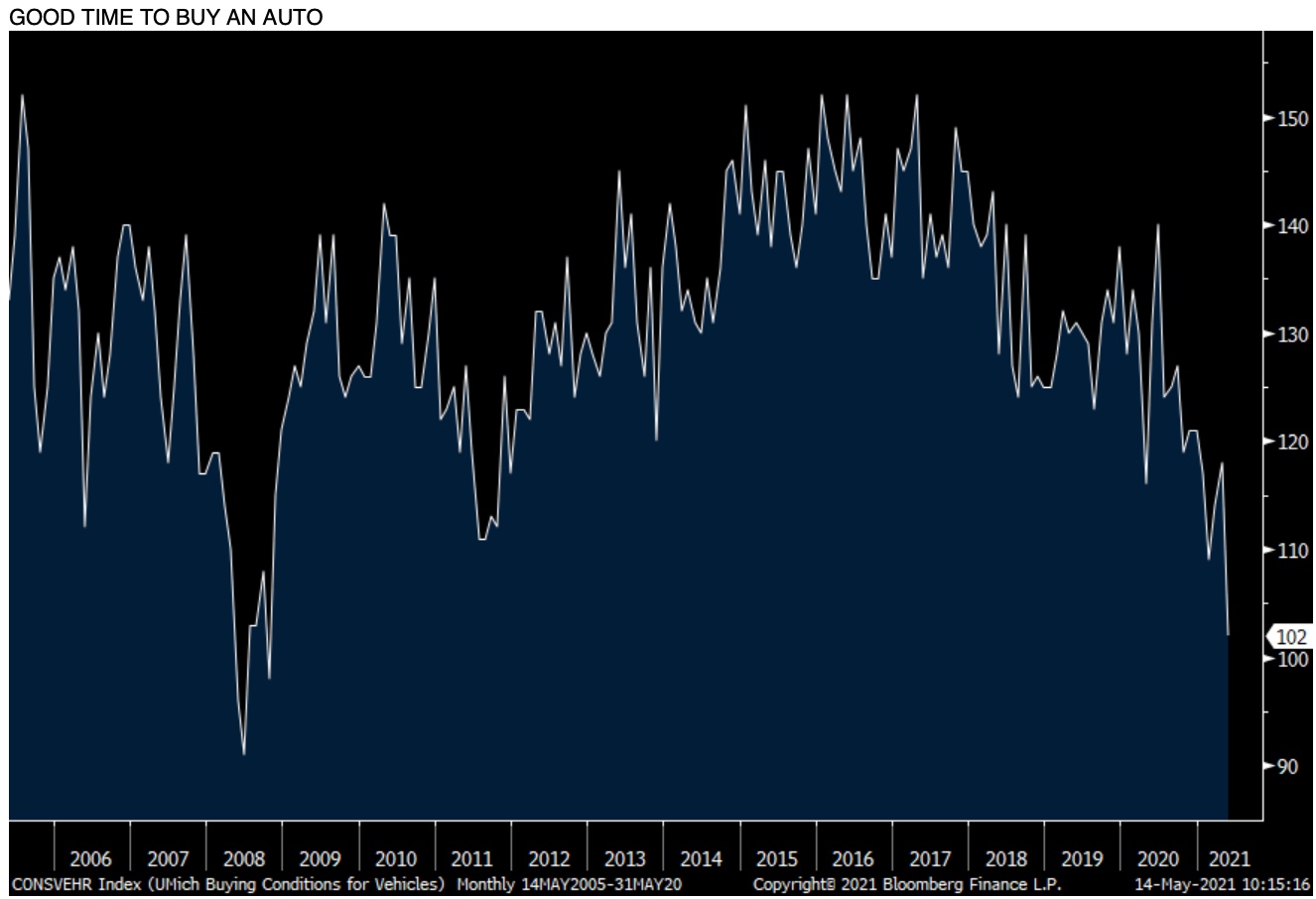 Go back to 1983 the last time this small amount of people that thought it was a good time to buy a home. Those that said it’s a good time to sell jumped 9 pts and by 26 over the past 3 months to the most on record since this question was 1st asked in 1992. 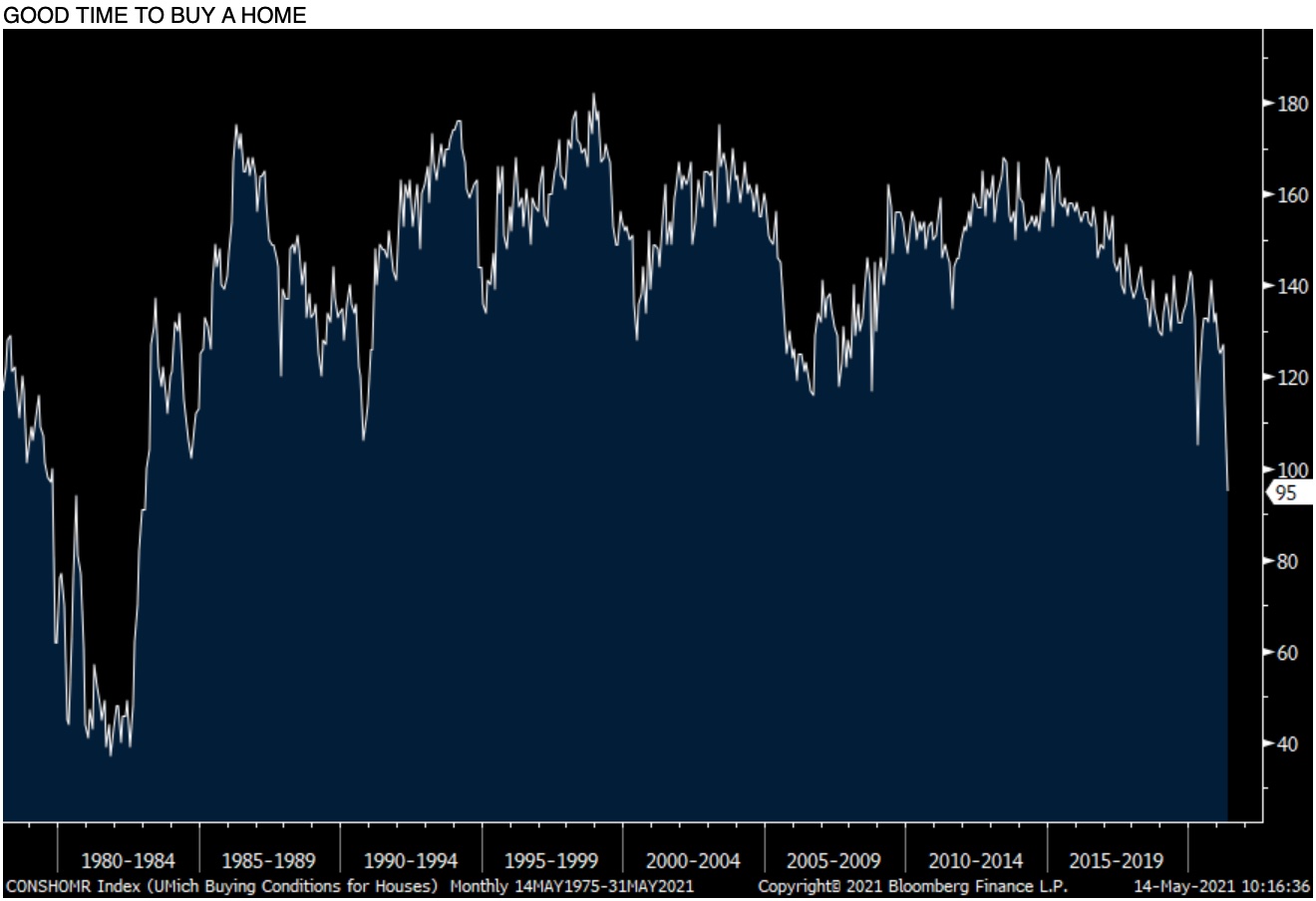 Finally, those that said it’s a good time to buy a major appliance fell 12 pts m/o/m.

Bottom line, the Wall Street inflation worries are now hitting Main Street and if one behaves based on how they feel here, it could have profound economic implications if it lasts.

Eric King:  “Joe, can you talk about these results and why they have shareholders so excited?”

Unparalleled Silver Grade
Joe Hebert:  “Eric, I think one of the things is no one sees 8+ kilo silver samples very often — almost never. It is also expanding one our shoots to the north where we will now be preparing to do deeper drilling in all of the shoots. But displaying that type of mineralization at higher grades has the stock surging on the upside…

We are also in a position where the tighter we drill it, generally we should be seeing an increase in thickness as well as grade. That is something we want to demonstrate with this round of drilling. This has such high grade that people are now simply counting the number of high grade shoots we are putting together, and the next wave of drilling should take the project to the next stage. Meaning, if we hit 10 or 12 shoots, these things are of such size that we would start hitting the magic number that everyone wants to see. And the grade, Eric, is just unparalleled in South America.” Outcrop Gold, symbol OCG in Canada and OCGSF in the US.