As the world edges closer to the next crisis, today the man who has become legendary for his predictions on QE and historic moves in currencies just issued a dire forecast as we approach panic in global markets.

Dire Forecast
July 21 (King World News) – Egon von Greyerz:  “It is not difficult to understand Cassandra’s enormous frustration. She was given the gift of accurately predicting important events and her curse was that no one would believe her. Some of us are certain that we can now see the biggest bubbles in economic history coming to an end with totally devastating effects for the world. But like Cassandra, we are also cursed since more than 99.9% of the world’s population would not believe our predictions.

The problem is that this time it will not only involve the biggest wealth destruction in history, but also lead to major problems in society with mass unemployment, no social security, no pensions, breakdown in law and order, social unrest, civil war and geopolitical conflict.

Reading these very dark predictions, I can understand that most people want to stick their head in the sand and ignore these dire forecasts. Obviously I would also hope that all these predictions are false and won’t come to pass. But as Winston Churchill said:

“THE TRUTH IS INCONTROVERTIBLE,
MALICE MAY ATTACK IT,
IGNORANCE MAY DERIDE IT,
BUT IN THE END THERE IT IS”

I wrote about Cassandra on KWN back in June of 2017, and have over a very long period tried to warn anyone who is willing to listen about the risks and the events that will affect us all. We are obviously not alone in worrying about the magnitude of the problems in the world. Virtually everyone following KWN has similar views so here we are talking to a converted audience. But even when we speak to family, friends, business friends, etc, we are met with the same degree of skepticism. This is, of course, understandable since we are facing an event that occurs once a generation or once every hundred years. And the magnitude this time might even be a multi-century cycle.

When the secular bull market turns down, the world will experience unprecedented market behavior as asset bubbles burst. Investors will find that there are no buyers at any price. And for gold, there will be no sellers at any price:

What this means is that at some point during the downturn stocks will fall precipitously with no buyers to be seen. Computer trading programs accounting for 70-80% of volumes will issue massive sell orders and the price will just drop into a black hole since there will be no bid. The general investment public will naturally panic and sell at any price. But the problem is that there will be no market because there will be no buyers. This is how stocks quickly can drop 50% or more in a couple of days due to a total lack of liquidity and buyers.

QE To Infinity And Beyond
It will be the same with the bond market. Investors will want to get out of government or corporate bonds, which are unlikely to pay the interest, and many will simply default. With no buyers, the bond market will collapse and bond rates will go to infinity. Rates above 50% might sound attractive, but it will be meaningless if neither interest nor capital will be paid. 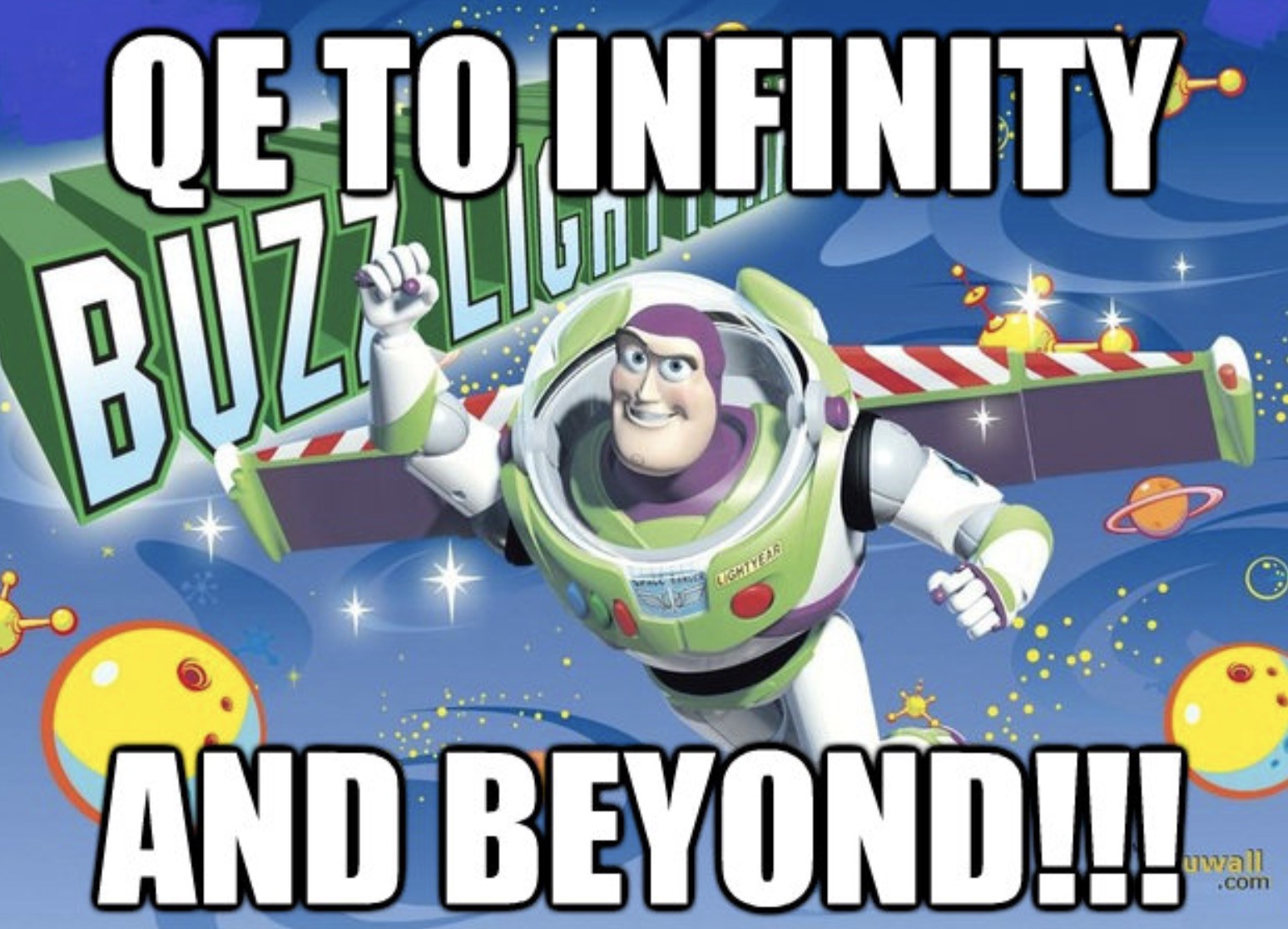 This will create total panic in credit markets as global debt of $250 trillion implodes. In the meantime, central banks around the world will print additional $100s of trillions in a futile attempt to save the world.

But it will be the $1.5 quadrillion derivatives market that will totally kill financial markets. This is a totally false market that only works in bull markets when there is liquidity and counterparties pay up. In the coming implosion of asset values, there will no liquidity and no buyers of worthless derivatives as counterparties default. In retrospect, this incredibly profitable activity for all the major investment banks will be judged as fraudulent with severe consequences for management and regulators as well as for the world.

Obviously, central banks will panic, print unlimited amounts of money, lower rates to zero or negative, halt trading in markets for extended periods, and manipulate markets in every possible fashion. But they will fail since they will be totally bankrupt, having issued unlimited amount of worthless bonds that they can never repay.

As The Panic in Global Markets Begins
As panic in markets begins and investors quickly turn from the stock market euphoria of the past to total fear, some investors will rush to buy wealth preservation assets. Some part of whatever liquidity they have left will go into precious metals — gold, silver and platinum. The only precious metal of size is gold and initially there will be gold available, albeit at much, much higher prices than what is being quoted today.

Initially there will be some willing sellers and gold will rise to multiples of the current price. But as the paper gold market collapses, there will be panic and at that point gold will go “no offer.” No offer means that there will be no gold offered at any price since there will be no physical gold available to be bought. Eventually there will probably be a price where some sellers are prepared to part with a small portion of their gold but that price is likely to be at such a high level that it will be difficult to fathom today. Due to high inflation or hyperinflation, no gold seller is likely to accept paper money as payment, but more likely other assets, whether it will be property or commercial assets such as businesses.

There are a number of people who believe that governments will confiscate gold or ban gold trading. This is clearly possible and one should avoid holding gold in certain countries like the US or even the EU. This means that it is not advisable to store gold in those regions, nor to deal through precious metal companies that are based in the EU or the US even if the vaults are in other countries.

Also, it is important to only deal with countries with a long tradition of democracy and rule of law.  Many off-shore locations, whether the vault or the arranging company is based there, should be avoided. Very recently we had a client who wanted to ship a small part of his gold holding from Switzerland to Panama where he lives. When the gold arrived there, the customs agent said there was a new rule and that our client had to pay a fee of $30,000 on the total amount transferred of $150,000. That was a penalty or duty of 20% of the value the gold. Whether this was a bribe or a proper duty was never made clear. Nevertheless, we managed to ship the gold back to Switzerland and avoid the fee.

Another argument I hear is that governments are not going to allow individuals to earn major profits as gold goes to multiples of the current price. But we must remember that in the next couple of years, institutions, pension funds, and investment funds, are going to buy all the gold they can get hold of, at whatever price, as an inflation hedge. Governments are very unlikely to confiscate gold assets of pensioners and other private investors. There is a much easier way for penalizing private investors who benefit from the coming increase in the gold price and that is of course taxation. The assets of the rich are likely to be heavily taxed in coming years and that is why tax planning is as important as investment planning.

If Cassandra is right and investment markets will implode in coming years, investors still have a very, very brief period to protect their wealth. Global stocks are all in a position from which a major fall or crash can start at any time. Whereas precious metals and precious metals stocks are on the cusp of a massive bull market. It is likely that these major market moves will start in the early autumn of 2019, at the latest, and possibly earlier.

We must remember that gold is primarily not an investment, although it will appreciate substantially in real terms. Gold is insurance, gold is money, gold is wealth preservation and gold is the only asset which is no one else’s liability. Unfortunately, very few are aware of these important facts and will not be prepared for what is coming very soon…For those who would like to read more of Egon von Greyerz’s fantastic articles CLICK HERE.

Bill Fleckenstein discusses in detail what investors should be doing now after the surge in gold, silver and the shares as well as the discussing the action in gold and silver and what to expect next in his KWN audio interview and you can listen to it by CLICKING HERE OR ON THE IMAGE BELOW.

Gold & Silver War Heats Up: Despite Pullback, This Is Truly Remarkable CLICK HERE TO READ

Peter Schiff Just Warned “QE Infinity Is Coming” Plus Silver Has Been On A Tear! CLICK HERE TO READ