Forget today’s pullback while the Fed meeting takes place because gold is beginning to shine as investors turn more defensive.

Gold Shines As Investors Turn More Defensive
January 26 (King World News) – Ole Hansen, Head of Commodity Strategy at Saxo Bank:  Gold’s ability to defy gravity amid rising US real yields continues and yesterday it reached a two-month high as investors continue to rediscover gold’s attractiveness amid elevated stock market volatility, inflation been anything but transitory and growth concerns. Gold’s small dip last year following an extraordinary rally of 48% during the previous two years was driven by long liquidation from asset managers amid strong equity markets and low volatility as well as the belief rising inflation would turn out to be transitory, and not pose a longer-term threat to growth and price stability…

Towards the end of last year, a major change occurred at the US Federal Reserve after President Biden’s team likely made it clear the if Team Powell wanted to lead the Fed, it needed to focus on the 150 million Americans at work seeing their pay reduced every month in real terms by the Fed’s inaction on inflation, rather than focusing on maximizing accommodation to support the remaining six million unemployed in finding work. Both Powell and Brainard (the incoming Vice-Chair) complied and forcefully so and the hawkish shift in language helped send US ten-year real yields sharply higher as the market began pricing in four rate hikes in 2022 followed by another three in 2023.

Gold traded lower in early January as real yields began to spike higher but since then an underlying bid has slowly been driving prices higher. The are several reasons for the recent change in focus, and apart from current geopolitical concerns supporting a small bid, there are other and bigger drivers emerging, some of which are highlighted below. 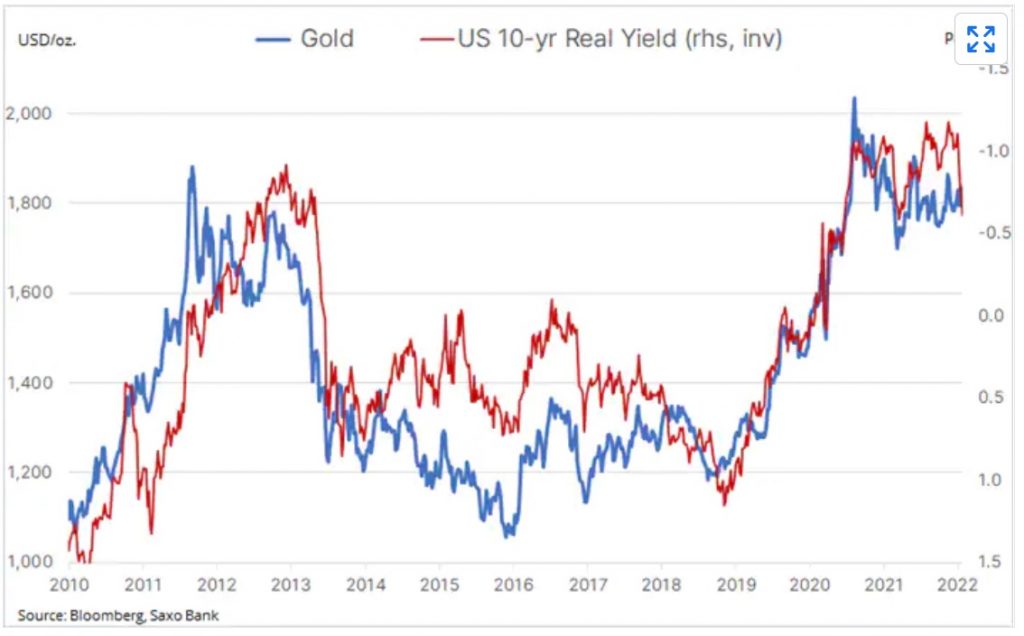 2) Gold has during the past month been exhibiting rising immunity towards rising real yields (chart above) with investors instead focusing on hedging their portfolios against the risk of slowing growth and with that falling stock market valuations. Even more aggressive rate hikes may end up being positive for gold as it will further raise the risk of a policy mistake from the Federal Reserve as it increases recessionary risks. During the past week total holdings in ETF’s backed by bullion jumped the most since September 2020 to a three-month high at 3083 tons. 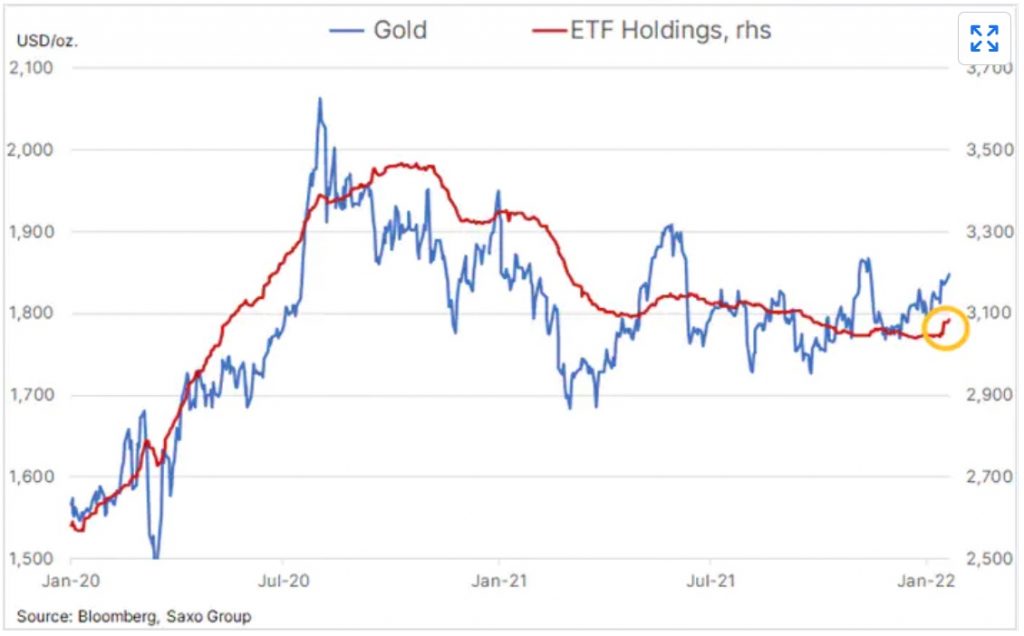 3) During the past month, the commodity sector has continued to show strength with the risk off across other asset classes having a limited impact. This highlights the strong fundamentals underpinning many individual commodities where several will be facing a prolonged period of a mismatch between rising demand and inelastic supply. With some of the worlds most tracked commodity indexes holding between 5 and 15% of their exposure in gold, any demand for these will automatically generate additional demand for gold.

4) While asset managers as seen in the ETF chart above are showing signs of renewed appetite, the price action has yet to trigger any increased interest from leveraged money managers who often focus more on momentum than fundamentals. In the week to January 18, they held a net long in COMEX gold futures of just 84,539 lots, some 71% below the record peak from 2019. In order to attract demand from this investor segment, gold as a minimum need to break above the 50% retracement of the 2020 to 2021 correction at $1877 which is also the 2021 high. For the bullish outlook to be maintained gold needs to hold above its 200-day moving average, currently at $1805, while a break below $1790 may signal a deeper correction. 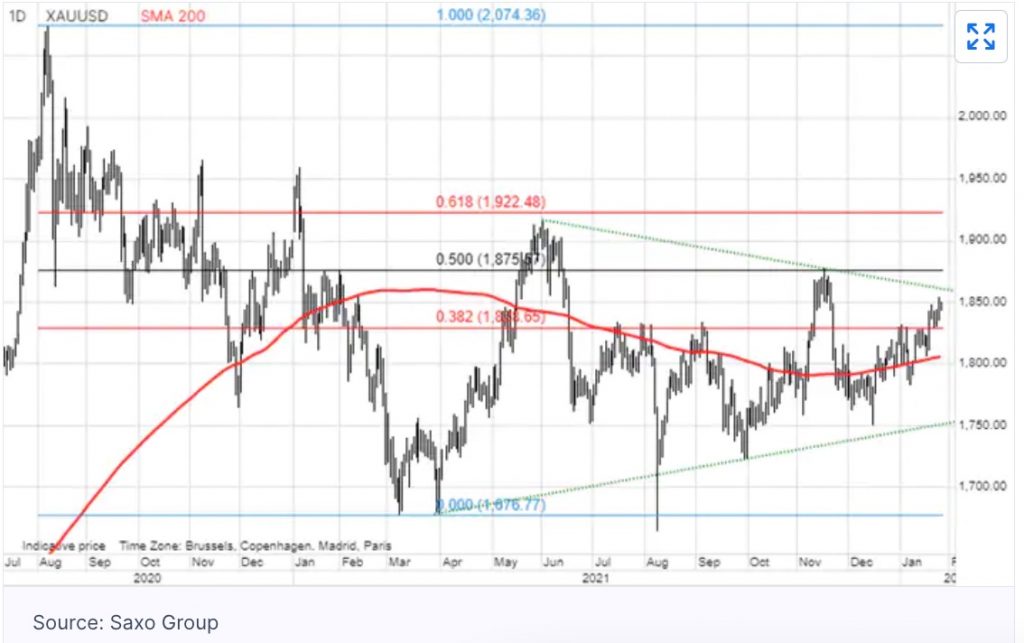 Summary:
Gold’s ability to defy gravity amid rising US real yields continues and yesterday it reached a two-month high on signs investors are rediscovering gold’s attractiveness as a shield against elevated stock market volatility and risks that the emerging rate hike cycle may drive down growth expectations without having the desired impact on inflation which increasingly looks anything but transitory.

Also of importance, Eric, is that our South Bullfrog project’s strategic land position recently expanded in the Beatty District that is ripe for consolidation following AngloGold’s acquisition of Corvus Gold, which Bullfrog borders. AngloGold is constructing a production hub and spoke plant to process gold from 6 deposits, and will be in production in 3 years and looking to add ounces, which has us very excited about the prospects for our Bullfrog project.

Eric, there is also a significant pipeline of additional copper and gold exploration projects in pro-mining Nevada and Arizona that provides enormous blue sky for investors. Zacapa Resources, symbol ZACA in Canada. To learn more about this exciting company’s first new copper porphyry discovery in Arizona in decades CLICK HERE.

Is The Madness Of The Elites Pushing The World To The Brink?

Inflation Still Worse Than The 1970s, Plus A Look At The Housing Market

Celente – These Wild Cards Can Crash Global Equities And Economies