The technology may still be in its infancy, but flexible screens are gradually being seen in more and more products.

Samsung and LG have led the way, so far, but a number of other firms including Japan’s Semiconductor Energy Laboratory are also developing super-strong, flexible screens.

At an exhibition in Tokyo, the firm demonstrated its latest breakthrough – a 5.9-inch display that can be bent more than 100,000 times without being damaged.

The foldable display is made of layers of lights using organic light emitting diodes (OLED).

It features touch sensors, meaning it works as a touchscreen at all angles and curvatures, and was demonstrated at the Display Innovation exhibition in Yokohama.

During the demonstration, the screen featured images of landscapes, cats and peacocks that bent and curved with the display.

It was seen curving over the edge of a handset, similar to the screen on Samsung’s Galaxy Note Edge.

Because the display pops out of the phone, it can even be used when the cover is closed.

The curved screen can also display notifications at the top and bottom while viewing a video without disruption.

The curved screen can additionally display notifications at the top and bottom while viewing a video without disruption.

The right-hand side of the Edge, which is curved, is where notifications and other icons appear.

It is the second phone released by the Korean firm that features curved display technology, following the Galaxy Round in October last year.

LG’s G Flex phone has a similar design, and both firms are pioneering curved TVs.

Peter Schiff: 'The dollar is going to crash, buy gold'

US official takes a stand to keep the internet 'fast, fair and open' 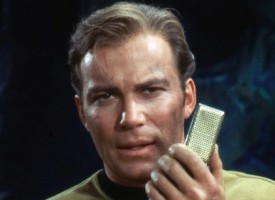