Market Grinds Higher Again
By Bill Fleckenstein President Of Fleckenstein Capital
April 12 (King World News) – The market bolted out of the starting gate, gaining about 0.75% almost immediately. The proximate cause for the party appeared to be a win at beat-the-number from J.P. Morgan and Disney’s announcement that it intended to get into the streaming business. That tactic was good for about a 10% increase in Disney stock, which added about $20 billion to its market cap (another case of rewarding revenue growth without much profit).

From there, the market backed off a bit and in the afternoon it mostly traded sideways, closing with a gain of 0.5%, plus or minus. Away from stocks, green paper was mixed, fixed income was lower, and the metals were flattish. The miners were a mixed bag.

When You Wish Upon a Star
The indices continue to hold together as we flirt with the old highs (although on light volume). Like most everyone else, I am surprised at their ability to hang in there, but I still want to see how the market can handle earnings season, given all the headwinds it faces.

The Bread Baking Indicator
Question: Just some anecdotal evidence that bubble may be coming to an end.. During previous bubble when I felt all was hopeless I’ve used cooking different types of food to take mind off the market…. I just baked my first ever loaf of bread… We have to be getting close!

Answer from Fleck:  “LOL, the bread-baking indicator. Goes with my lack of emails for yesterday’s Ask Fleck.”

Gold Head & Shoulders
Question: Hi Bill, Today I noticed on the twitter feed someone posted the Gold daily chart showing Head & Should pattern with lower highs (starting from Jan 19). I know that u normally don’t put much weight on these type of technicals.. but I am wondering if Gold is ready for a short term correction as now Fed is on hold & dollar still remains high & traditional gold buying time start in July-August?

Answer from Fleck:  “The whole world knows about that short H&S pattern. Whether it plays out or not I don’t know, but I kinda doubt it. There are also bigger inverted H&S patterns on the longer-term charts, which haven’t mattered yet. FWIW, the Fed on hold is not gold-negative. As for seasonals, sometimes they matter, sometimes they don’t.”

Less Gullible About Paper Money
Question: Fleck- If everyone seems to hate gold in the US then why is China (the largest gold producer) buying gold in the open markets? Does China seem to know more than we do????? THANKS

Answer from Fleck:  “Well, they sure seem to be less gullible about paper money.” 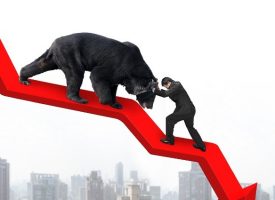