With the dollar tumbling and gold surging, King World News is pleased to share a brilliant piece from DiMartino-Booth, plus a note on consumer super-confidence in stocks.

But first, this brilliant piece…

A portion of today’s note from Art Cashin:  It’s Quiet Out There. Maybe A Little Too Quiet – In a way that’s the theme of three somewhat similar commentaries published over the last few days. One is from Howard Marks of Oaktree. Warren Buffett once remarked that when anything by Howard Marks comes across my desk, I always take time to read it, because anything Howard writes is always well-worth reading.

The second is from the equally brilliant people of Baupost. The third is from occasional FoF visitor, Danielle DiMartino-Booth (who has just begun a new subscription letter and advisory).

I wish we had room to cite many of the great ideas and phrases but we can only give you a taste. Here are some stats from Danielle’s latest piece, titled, “The Greater Moderation”:

The volatility on stocks, as gauged by the VIX index, hit its lowest intraday level on record July 25 of this year. As for how much stocks are jostling about on any given day, that’s sunk to the lowest in 50 years. Treasury market volatility is at a…record low. A lack of volatility in the price of oil is peeving those manning the commodities pits. Even go-go assets are dormant. The risk premium, or extra compensation you receive to own junk bonds, is negative. Negative!

But this non-news spreads far beyond asset prices and presumably hits policymakers’ sweetest spot. According to some excellent reporting by the Wall Street Journal’s Justin Lahart, “Over the past three years, the standard deviation of the annualized change in U.S. gross domestic product…is just 1.5 percentage points, or about as low as it has ever been. It is a trend that is being matched elsewhere, with global GDP exhibiting the lowest volatility in history.

Lahart goes on to add that job growth and corporate profits also seem stunned into submission. And then he goes for the jugular: “In the years since the financial crisis, the Federal Reserve and other central banks have acted like overprotective parents of a toddler, rushing in whenever the economy looks as if it might stumble. That risk-averse behavior has extended to businesses, making them unwilling to take chances.”

The WSJ goes on to report that at no time in at least 30 years has not one of the three major stock indexes in the U.S., Asia and Europe avoided a five percent decline in a calendar year…until what we’ve seen thus far in 2017, that is.

Is it any wonder the ranks of those who would profit from stocks declining have fallen to a four-year low? Why bother in such a perfect world?

In other words, we’ve never had it this good, or perhaps this bad. In that case, this must be The Greater Moderation. And by the looks of things, it’s gone global.

It’s no secret that the Bank of England, Bank of Japan and European Central Bank have been aggressively flooding their respective economies and in turn, the global financial system, with liquidity in some form of quantitative easing. If there is one lesson to be learned from The Great Moderation, it is that liquidity acts as a shock absorber.

In short, a less liquid world would be smaller, for a time. But when the time came to allow nature to take its course, central bankers could not bear the pain, nor muster the discipline, to allow creative destruction to cull the weakest from the herd. Their policies have forced us to pay a dear price to maintain a population of inefficient operators.

The Economist recently featured a report on “corporate zombies”, firms that in a normal world would not walk among the living. Defining a ‘zombie’ as a company whose earnings before tax do not cover its interest expenses, the Bank for International Settlements placed 14 developed countries under the microscope. On this basis, the average proportion of zombies among publicly listed companies grew from less than six percent in 2007 to 10.5 percent in 2015.

So we have one-in-ten firms effectively sucking the life out of the world economy’s ability to regenerate itself. There is no such thing as a productivity conundrum against a backdrop of such widespread misallocation of capital and labor. There is no mystery cloaking the breakdown in new business formation. And there is no enigma, much less any reason to assign armies of economists to investigate, shrouding the new abnormality we’ve come to know as a low growth world.

Now, some concern about the stock market…

This Is What’s Called Consumer Super-Confidence
From Jason Goepfert at SentimenTrader:  “The latest monthly survey results from the Conference Board shows that about 42% of American consumers expect stock prices to rise in the coming months. That’s down from a high of 47% in March…

Going back to its inception in 1987, the average ranks in the top 2.5% of all readings. 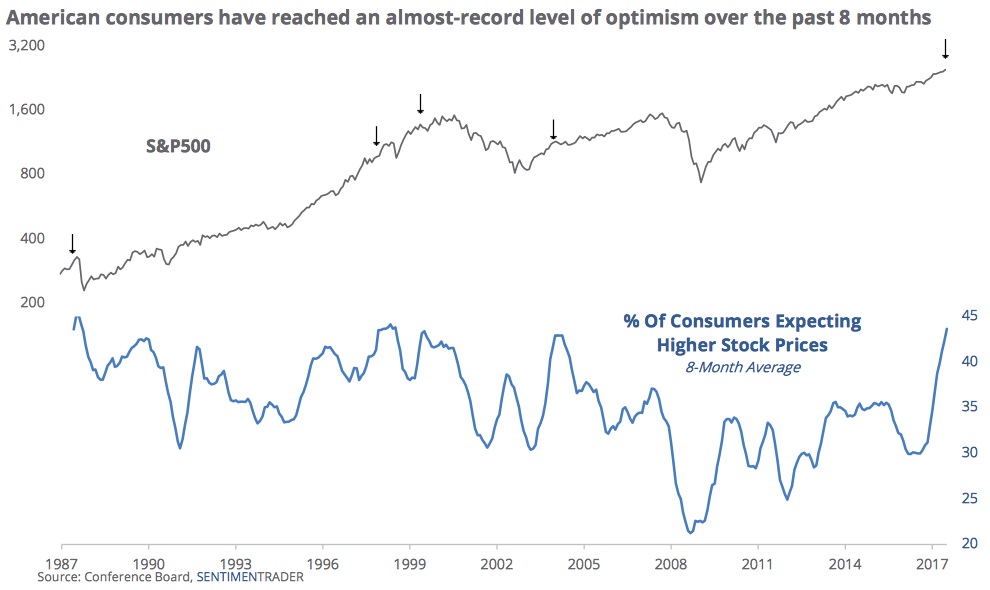 The only other times that optimism for rising stock prices over such a long time period reached the current level were in June 1987, December 1997, June 1999, and January 2004.

It was not a precise timing mechanism, and shouldn’t be expected to be, but it did highlight conditions where the risk/reward was getting sketchy over the coming months. When stocks did manage another few months of gains, they were given back harshly (1987, 1997). In 1999 and 2004, stocks started to relax almost immediately, though the former quickly recovered and hit new highs, forming the 2000 bubble peak.”

Fed Decision Sends Gold And US Dollar Moving, But Here Are The Big Surprises