It appears people in the financial world are getting tired of the same old bullish*t from the Fed, especially its massive trading room that is used to control the stock market and gold. Plus look at everything that is skyrocketing!

Fed Trading Room Up To The Same Old Bullsh*t
March 22 (King World News) – Garic Moran:  Yesterday, J. Powell says he is Paul Volcker and [will] do whatever it takes to tighten financial conditions. 4AM this morning Yen plunges SPYs rally, Gold & Oil fall. We are facing possibility of real food and energy shortages and FED continues to play the game that got us here?

As a reminder, Japan holds no Gold in their international reserves, they produce no Gold, and they consume no Gold. Yet, the correlation between the Yen and Gold futures in overnight trading has been going on since Bernanke took us down the path of monetization.

Miners Seeing 2015/2016 Opportunity
Graddhy out of Sweden:  Said many weeks ago that the setup for precious metals miners looked like the setup at the bear market bottom back in 2015/16, i.e. a possible false breakout, which we got, and then an upmove with very small pullbacks, making it hard to buy in if one missed the lows. Still does.

Stupid Sh*t
Stephanie Pomboy:  I’ve seen a lot of stupid s#*t in the 30+years I’ve been at this. But the glee with which equity investors are running into the 2″x4″ is other level…

This Ought To Stop Inflation…NOT
Holger Zschaepitz:  Good Morning from Germany where the 10 year yield of mortgage-backed securities (so-called Pfandbrief) jumped to almost 1.1%, the highest in 8yrs, in an initial stress test for the frothy German housing market. 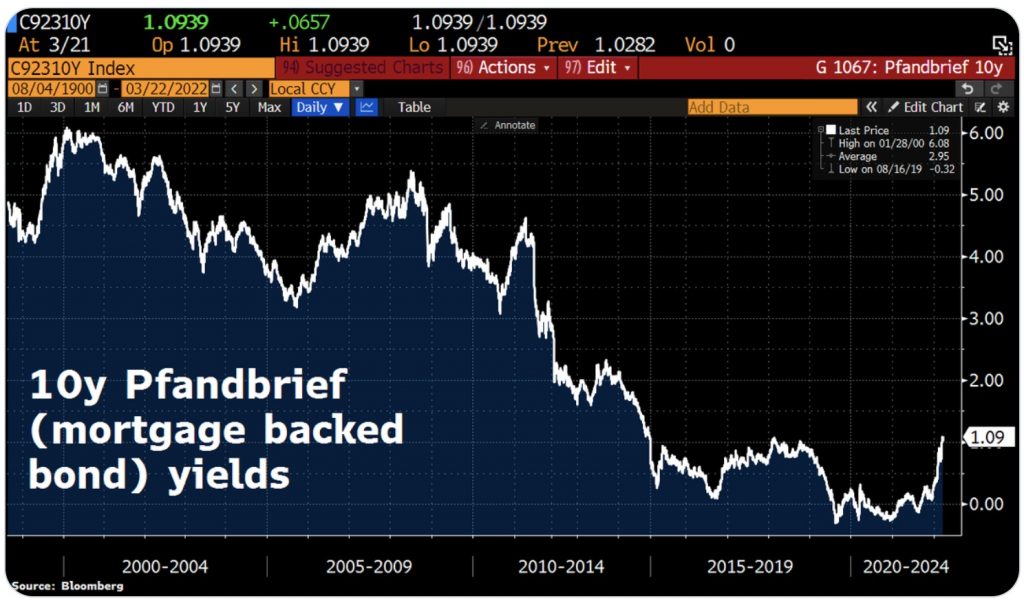 The Ugly Truth About The US Dollar
Simon Mikhailovich:  Some say USD’s #1 reserve currency status is ending; others say there is no alternative. How about this: As USD gets competition, marginal USD demand declines and borrowing costs rise. It only sounds lukewarm – higher costs would be a disaster at the current USD debt levels.

Toronto Stock Exchange Breaks Out!
This Should Benefit Energy And Mining Stocks 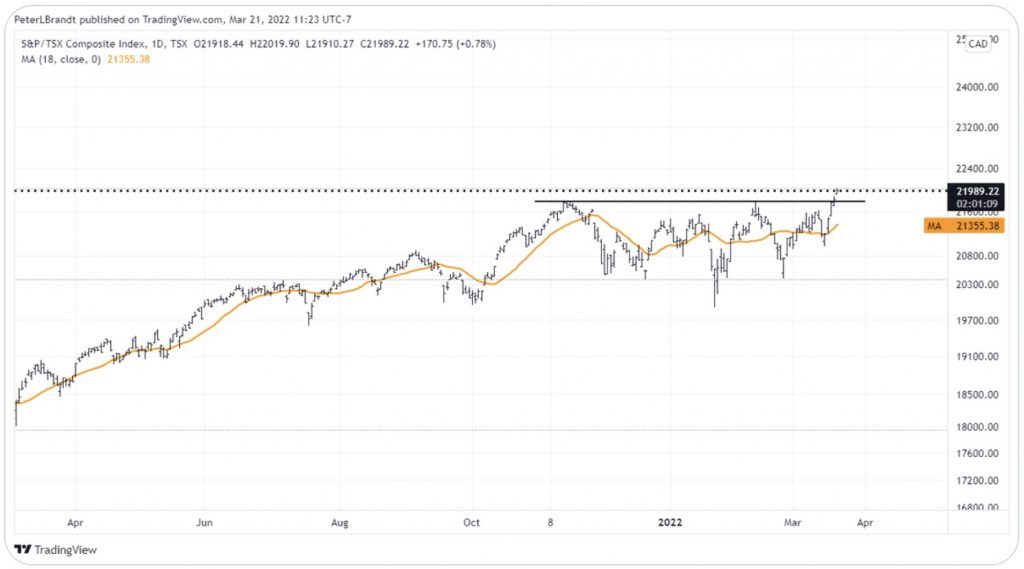 Inflation Arsonists
Peter Boockvar:  More inflation arsonists from the Fed will be showing up today in their fire trucks, NY president Williams and Daly and Mester from SF and Cleveland, respectively. Meanwhile, yields continue higher globally with a sharp selloff in Asian bonds that spilled over to Europe and here. The Reserve Bank of Australia screwed up too with being overly easy for way too long with the failed YCC and the market is revolting against them. The 2 yr Australian yield is jumping by 17 bps today alone to 1.56%. It was at .59% at the beginning of the year. 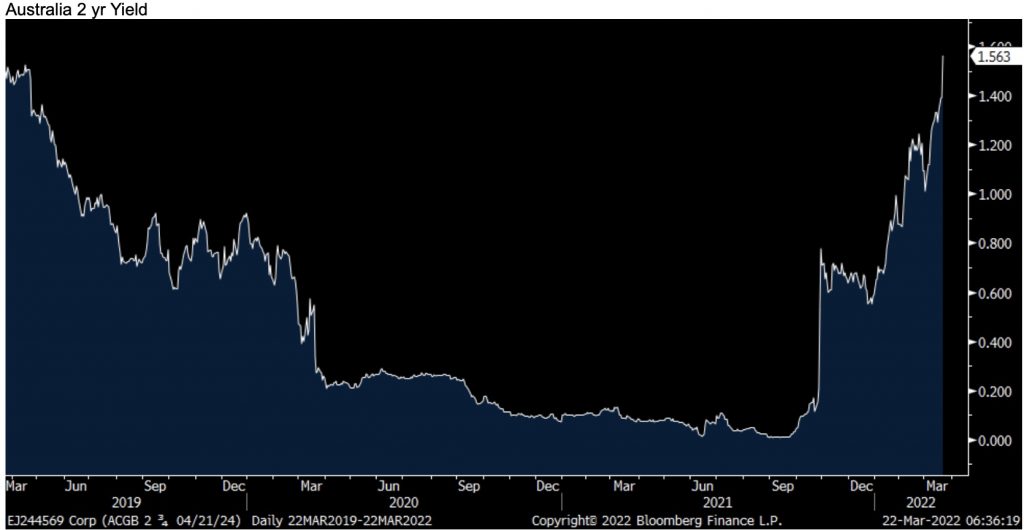 Their 10 yr yield is up by 14 bps to 2.72%, the highest since November 2018. New Zealand saw similar yield moves and they jumped too in Hong Kong, South Korea, Singapore and Indonesia to name some others. 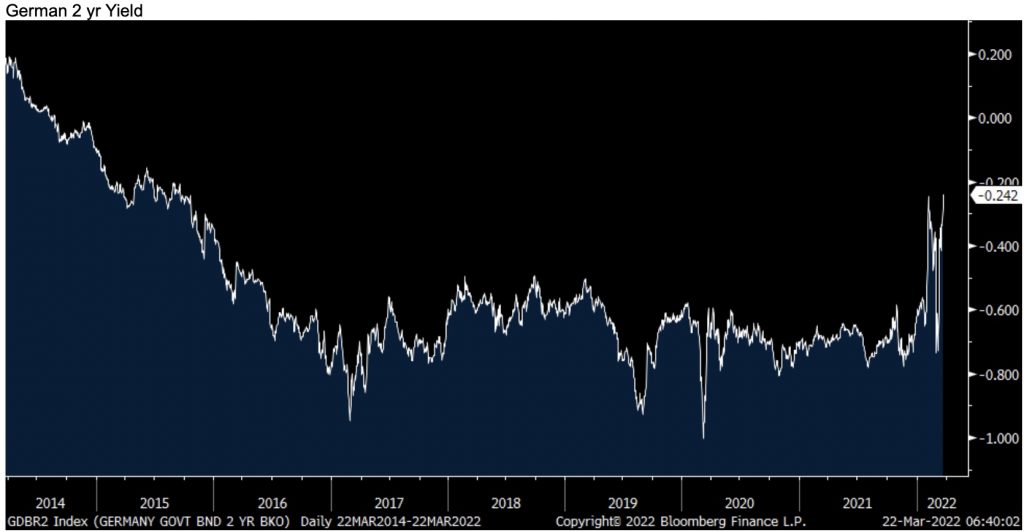 European bank stocks are in turn getting a lift and that is what is helping European stocks today. The Euro STOXX bank index is though still 80% below where it was in 2007. So the only thing the ECB has done over the past 10 years with QE and NIRP is essentially save the hide of European budgets, nothing else.

Global Bond Bubble
I’ll finish here by adding to my continued expressed point that where European bond yields go from here, the epicenter of the global bond bubble, will be a key determinant of where US yields go by raising the prospect of more disruptions if the Bank of Japan ever decides to widen its yield curve control bank in response to higher inflation and now a weaker yen. I bring up the weakening yen today because it is really getting weak to the lowest level vs the dollar since early 2016 as BoJ monetary policy becomes even more separated from the rest of the world. This ties into the massive costs that Japan has because they import almost all of their fossil fuel energy needs.

Japanese Yen Continues To Weaken vs US Dollar 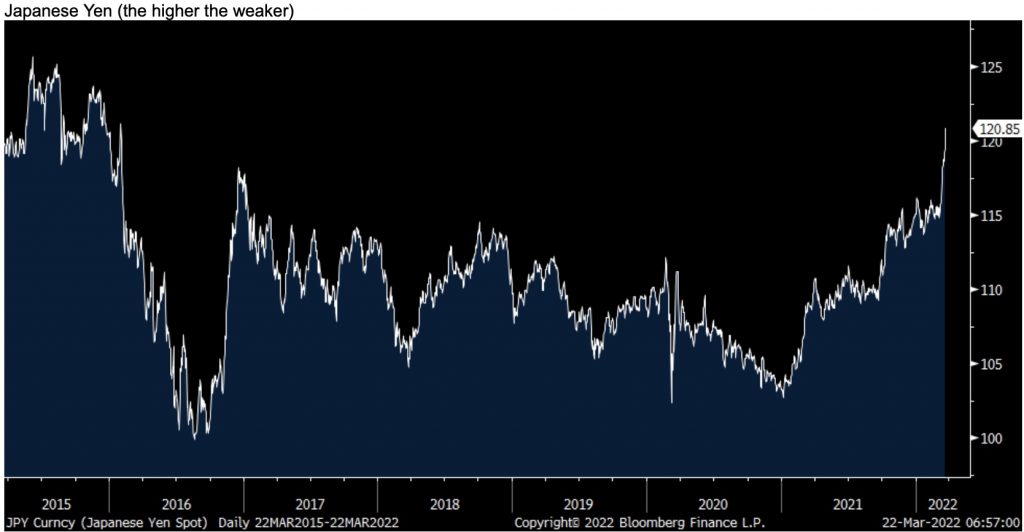 According to the International Energy Agency, in 2019 “fossil fuels accounted for 88% of total primary energy supply” in Japan and about all of that is imported. A weaker yen on top of much higher energy costs is a huge pain point, especially with so many nuclear plants still off line post Fukushima. Of 33 plants still operable, only 10 are being used with hopes for 15 more to open, but not soon enough.

Small Businesses Also Being Crushed By Inflation
In case you missed the WSJ article yesterday titled “High Fuel Prices Sting Small Businesses”, it said “52% of small business owners said higher energy prices were affecting their businesses, according to a March survey of more than 780 small businesses for the Wall Street Journal by Vistage Worldwide, a business coaching and peer advisory firm.” These businesses are also having difficulty finding workers and now face higher interest rates. This quote stood out from David Hastings, the CEO of Hastings Water Works, a 30 yr old swimming pool service, maintenance and management company, “I am absolutely raising all my prices across the board and I am doing so aggressively.” The bold is mine.

Nickel prices on the LME by the way are back to where they closed on March 4th, just under $30,000 a ton.

Expect Even More Food Inflation
I include a chart below of the Green Markets North America Fertilizer Price Index which includes potash, phosphate and nitrogen in its different forms. The price is of Friday and highlights the sharp increase in nutrient costs that many farmers face globally. 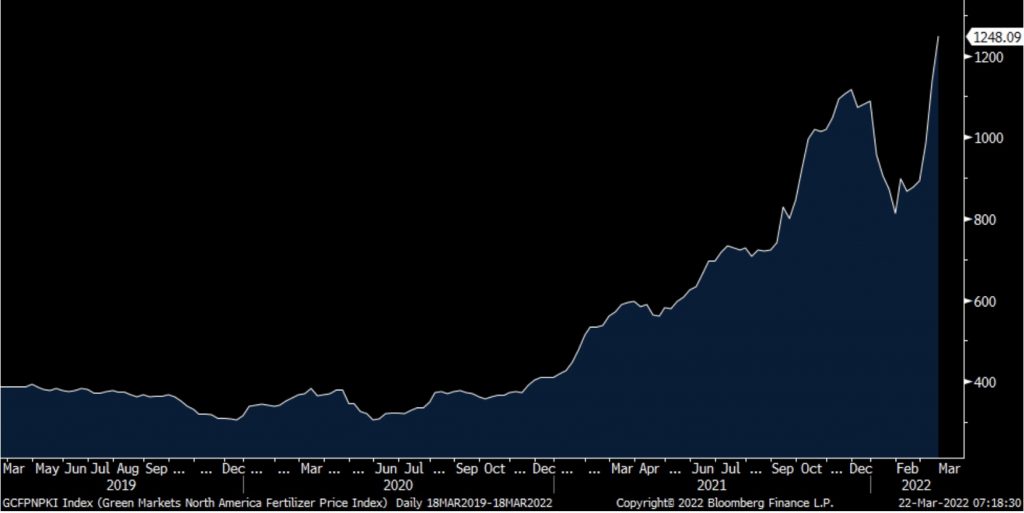 Unfortunately in the Ukraine, now in the midst of planting season, only about 1/3 of arable land will be planted, based on estimates I’ve seen, with the fall harvest hugely uncertain because of the lack of fertilizer availability. Higher food prices will remain a big global problem. I’ve been bullish for years on the fertilizer names like NTR and MOS but less so now after the price spike, notwithstanding the amazing fundamentals.

Central Banks Rule The World, Less Than Zero, Plus The Road To $50 Silver