On the heels of the Fed decision, the price of gold has surged above $1,390. Here is what to expect next.

Fed Decision & Gold’s Reaction
June 19 (King World News) – Peter Boockvar post-Fed decision: Bottom line, the FOMC statement prepared the market for the possibility of a cut but we don’t know when that might occur. They continue to expect that a “sustained expansion of economic activity, strong labor market conditions, and inflation near the Committee’s symmetric 2% objective” are the most likely outcomes “but uncertainties about this outlook have increased.” To this they “will closely monitor the implications of incoming information for the economic outlook and will act as appropriate to sustain the expansion, with a strong labor market and inflation near its symmetric 2% objective.” The word “patient” was removed from the text…

In other words, if the economy weakens from here, they will likely cut in July. If the economy holds steady or improves (on maybe a trade deal) they won’t. What would you rather have? I’d prefer the latter. The market remains obsessed with the former and the belief that the Fed can cure all. The stock market is more focused on the cut in itself rather than the reasoning behind it.

They tweaked the first paragraph on the economy, referring to economic activity as “rising at a moderate rate.” The comments on jobs were still optimistic and there was no change here in response to the May payroll report. They acknowledged that inflation both headline and core “are running below 2%” but only the PCE figure they watch is. The inflation breakevens have fallen, along with oil prices and that was mentioned as well.

Uber dove James Bullard voted to cut rates and was the one outlier. With the dots, 8 members see a cut this year, 8 want none and 1 thinks we’ll see a hike (likely Esther George).

With respect to the economic projections, the GDP forecast was left unchanged at 2.1% which remains ABOVE their longer run estimate of 1.9%. They lowered their unemployment rate estimate to 3.6% which is BELOW their longer run forecast of 4.2%. They cut their headline PCE estimate to 1.5% from 1.8% and this compares with their longer term magic number of 2%. The core rate though was only lowered by 2 tenths to 1.8%, just off their target.

So, GDP is above their long term forecast, the unemployment rate is well below and core PCE is just 2 tenths less than its 2% target and James Bullard wants a cut now and 7 others expect a cut or two the rest of the year.

Gold Surges
The price of gold responded to the Fed decision and comments by surging above $1,390 and has continued to remain strong in active trading. The US dollar responded by breaking decisively below the 50 day moving average. This is also propelling the prices of gold and silver higher. With all of that as the backdrop, here are two interesting charts showing the commercial short interest in the euro (see charts below). 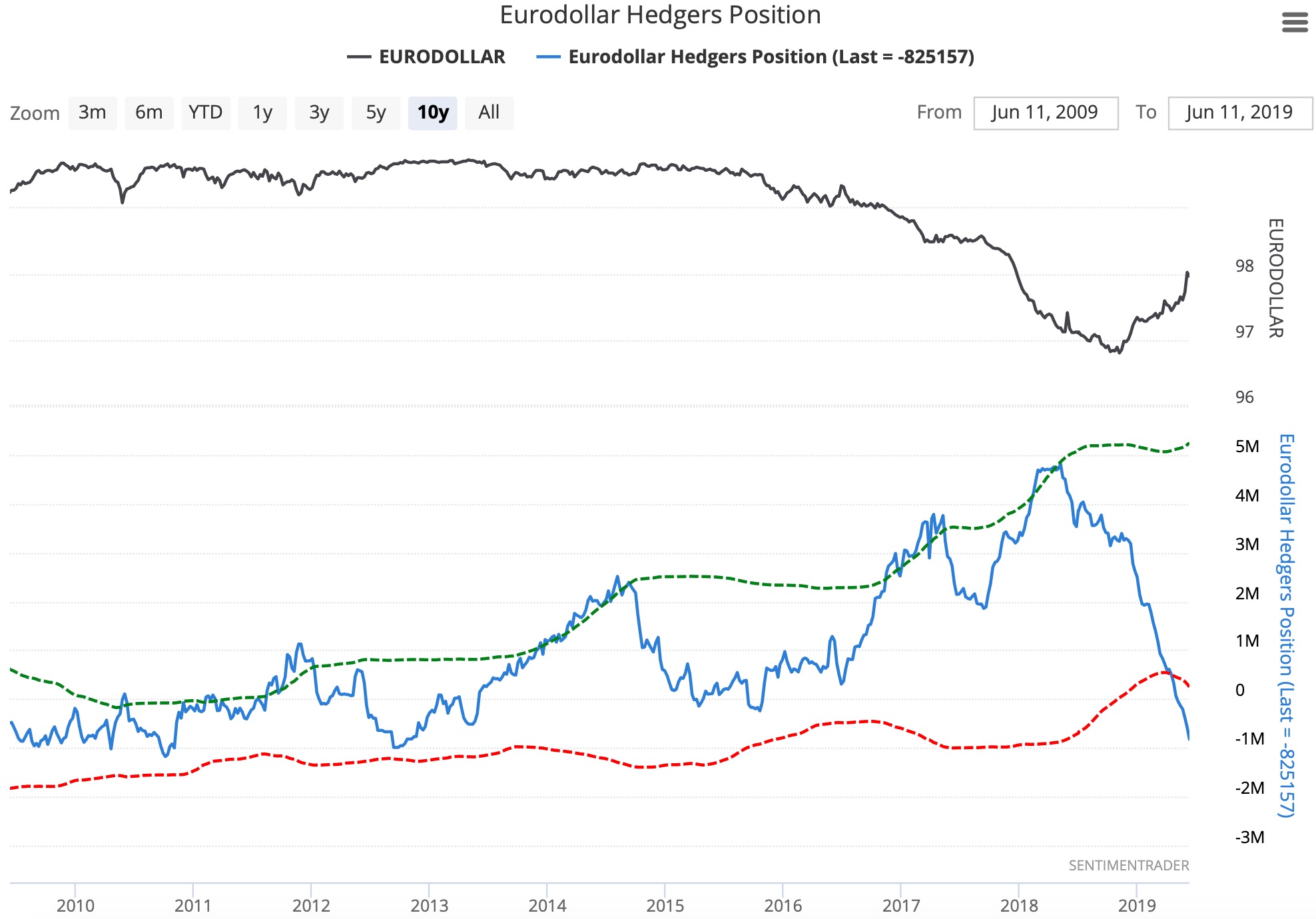 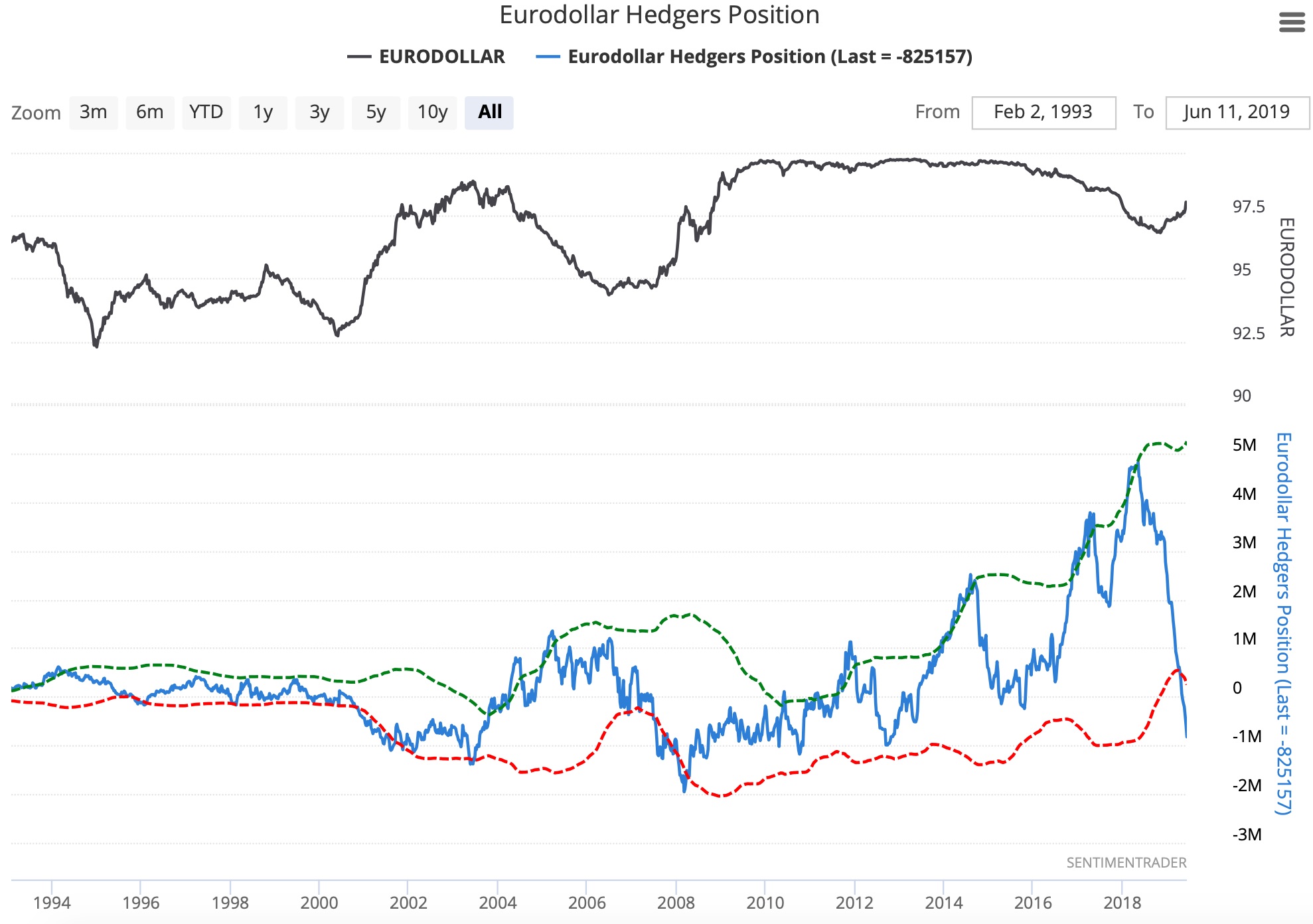 Also, check out A Note From Two Of The Greats On Fed Decision Day CLICK HERE TO READ.