Check out what is unfolding as the price of gold just hit an all-time high, plus keep your seatbelt fastened.

All-Time High For Gold Priced In Euros!
August 26 (King World News) – Holger Zschaepitz:  “In case you missed it: Gold measured in Euro has hit a fresh life-time high this morning. (See below). 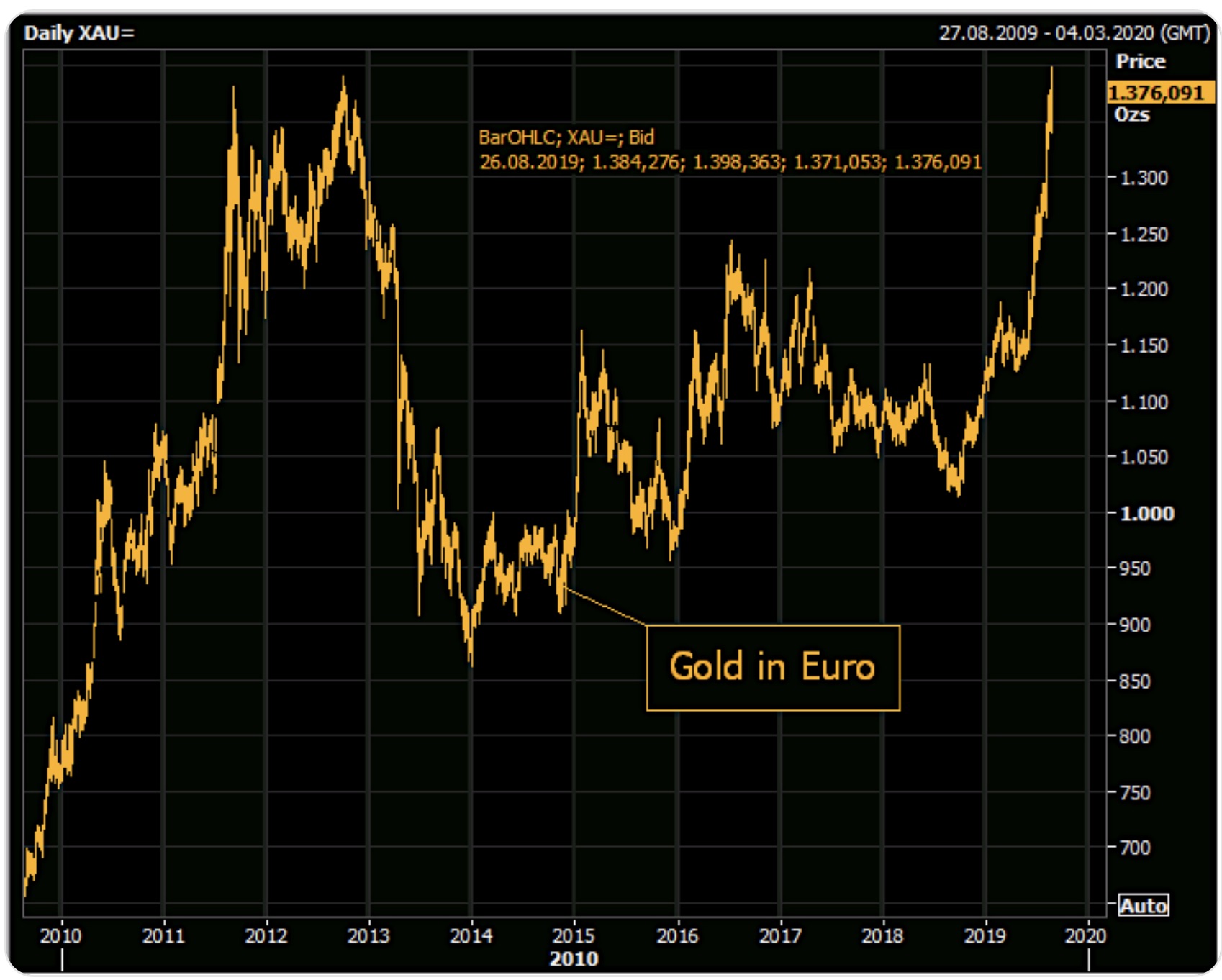 From legend Art Cashin:  On this day in 1814, in Washington, D.C., the White House, much to the surprise of the President, fell into the hands of his adversaries. It happened so quickly that he barely had time to send a note to his high profile wife telling her to get out. And, he probably drew little satisfaction in the fact that these same adversaries had driven both the Senate and the House out of the Capitol.

There were neither spin doctors nor poll readers to defend this President. His name was James Madison and his high profile wife, Dolly, barely escaped before the opponents took over. The adversaries were the British Army. They marched into Washington with only one casualty.

The President’s defenders had made a great deal of noise but they only managed to shoot the horse out from under the opposing general, forcing him to get his uniform dirty.

When the new guys took over, they decided to get rid of the records of the former administration, so they set fire to the White House and the Capitol. And into the next day the fires burned. Then a hurricane struck Washington. It helped put out the fires and drove the (now disorganized) British back to their ships.

The strongest performance was shown by the First Lady, Dolly. She refused to leave the White House until she had secured Stuart’s famous portrait of George Washington. She knew protecting pictures of dead presidents can be important to the nation.

On Friday morning, U.S. stocks opened with a negative tone on China’s announcement that they would impose and/or increase tariffs on a wide variety of U.S. goods.

Powell spoke at 10:00 and seemed to mollify things slightly, helping the Dow to move back into mild plus territory.

Then, around 11:00, President Trump tweeted, slamming Powell as an enemy of the U.S. and announcing that he was considering “ordering” some U.S. companies out of China. Since that might be done under a rather broad emergency powers act from 1977, the threat spooked buyers and a trap door opened.

The freefall began to slow within minutes of the tweet but damage was clearly done. Prices continued to ease lower throughout the balance of the day.

In the closing minutes of trading, selling began to accelerate again but that was cut short by a buy program for the close.

Overnight And Overseas – Asian equity markets all closed before President Trump’s assertion that China is seeking to resume trade talks. Tokyo closed down the equivalent of 550 Dow points. Hong Kong and Shanghai lost a bit less but were smartly lower nonetheless. India was odd man out, rising sharply on speculation of easing tensions in Kashmir.

In Europe, London is closed for the August Bank Holiday, which, historically, brings very slow trading in European equity markets. Paris and Frankfurt are seeing moderate rallies in thin trading.

Among other assets, Bitcoin has rallied slightly and is trading just under $10,400. Gold and oil are somewhat firmer. The euro is a shade softer against the dollar, while yields are a bit lower.

Consensus – Futures, which were down smartly pre-dawn have reversed smartly to the upside on Trump’s assertion that China called to resume talks. China failed to confirm that so keep your seatbelt fastened.

London closing suggests that markets may be thin around the globe. Thin markets, as you know, can be quite volatile. Another reason for that seatbelt.

GET READY: Fed Pivot Back To QE Will Shock Global Markets