After a wild week of chaotic trading, many investors have been left wondering what is next for the major markets and what is driving the crazy trading action in gold and silver?  The piece below takes a look at a major event that shocked the world and what investors should expect next.

January 19 (King World News) – Nothing has been done to address the structural inadequacies and distortions that lead to the 2008 financial crisis – instead our leaders have resorted to the procrastination made possible by turning to drugs, specifically Quantitative Easing, which has enabled them to clamp interest rates at 0 to prevent the already unserviceable debt load from compounding out of sight.

Spearheaded by the US, this money printing policy has now become standard practice around the world, with Europe and Japan following suit in a big way. The notion put about that all this newly printed money can somehow be contained within banks is nonsense as demonstrated by the soaring prices of stock markets in developing markets until recently and in various asset bubbles like the boiling London and New York Real Estate markets.

This global procrastination worked until recently, but now this reckless and economically suicidal policy is visibly coming apart at the seams – it didn’t work for Robert Mugabe’s Zimbabwe and it won’t for anyone else either because it is a flawed scheme to avoid facing up to the consequences and fallout from one’s actions. The only reason that the ship hasn’t sunk so far is complex financial engineering that has enabled the rot at the heart of the system to be obfuscated for as long as possible, but now the markets have gotten control of the ball and things look set to get ugly fast.

Of course, no-one really wants them to grasp the nettle and seriously attempt to rectify the mistakes of the past, because they have left it so late to do this that it would lead to an earth shaking deflationary implosion that would economically lay waste most of the planet. This being so they have no choice but to continue with more of the same, and any attempt by the Fed to resist the inevitable QE4 will lead to the markets getting it in an arm lock and forcing it to comply and cough up. This process has already started as deflationary forces have been gaining ascendency.

A symptom of these gathering deflationary forces is the crash in oil prices, and the failure of key support in copper about a week ago, which threatens to crash too unless something is done. The big question is when will they (the Fed) capitulate and reverse course – will they do so immediately to keep the game in play, or will they let the US stock markets crash first, so that they can use it as a justification for their actions? Europe, which is already being ravaged by deflation, has already surrendered and is preparing to do massive QE, which is why the euro is so weak.

Last week we had the bombshell development of the Swiss abandoning their Franc peg to the euro. This was a development with grave implications. They know that this move will severely damage their exports and tourism industries, but they have done it because they realize that it is better to take to the lifeboats now than go down with the Titanic (the euro). This was a major vote of no confidence in the euro that has kicked out an important prop from under it – and it's nice to see the Swiss going back to their independent mountain ways – now all they have to do is kick out the international snoopers spying on bank accounts to restore the confidence of the global tax dodging community.

Now we will take a look at various indicators for gold, starting with its latest COTs. These show that Commercial short and Large Spec long positions are starting to get to a rather high level – not enough to preclude further advance – but enough to put us on notice that we should not be surprised to see a consolidation or correction to the recent advance before much longer. 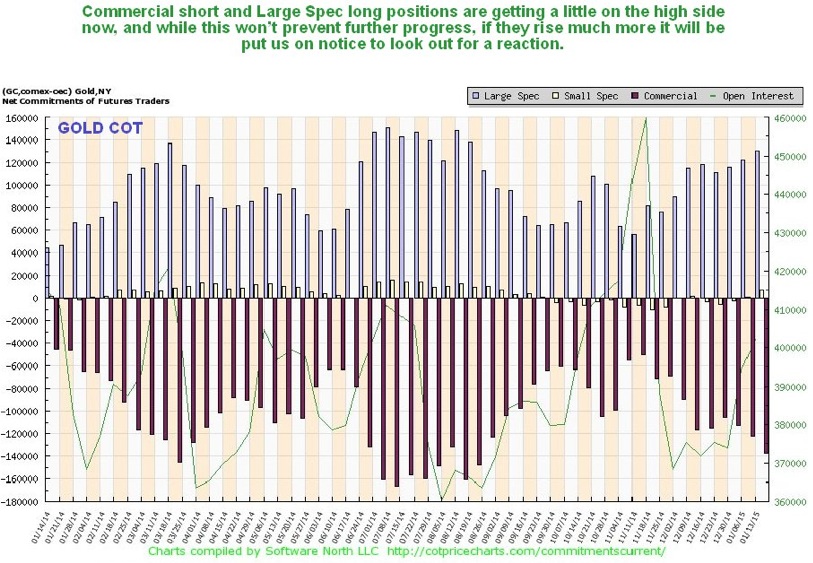 On silver’s 6-month chart shown below, we can see the clear breakout on Friday from the Head-and-Shoulders bottom. This is now a bullish picture and momentum is swinging positive, although as we later see, the latest COTs and sentiment indicators suggest that silver is not going to have such an easy time of it breaking through the strong resistance in the $18 – $19 area. 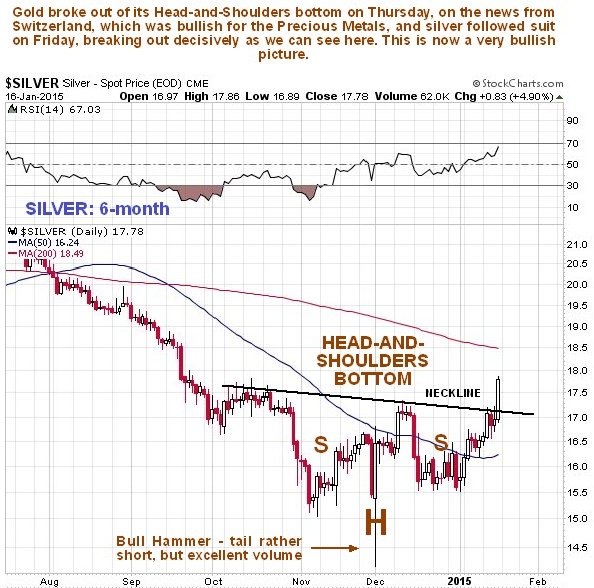 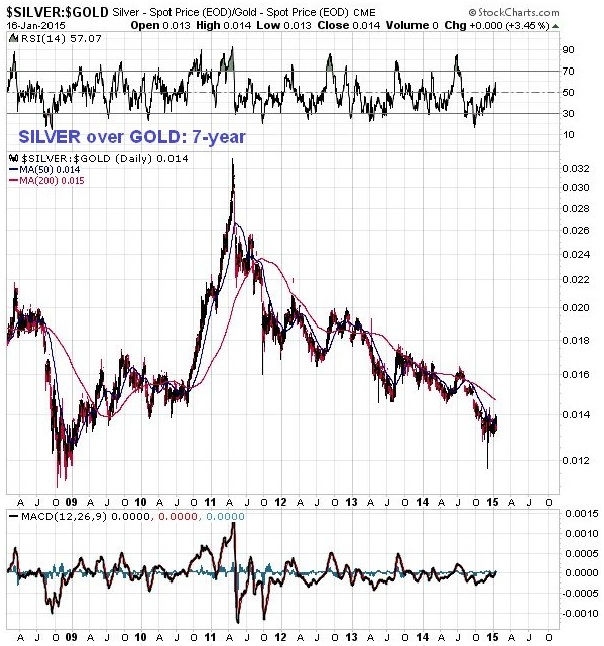 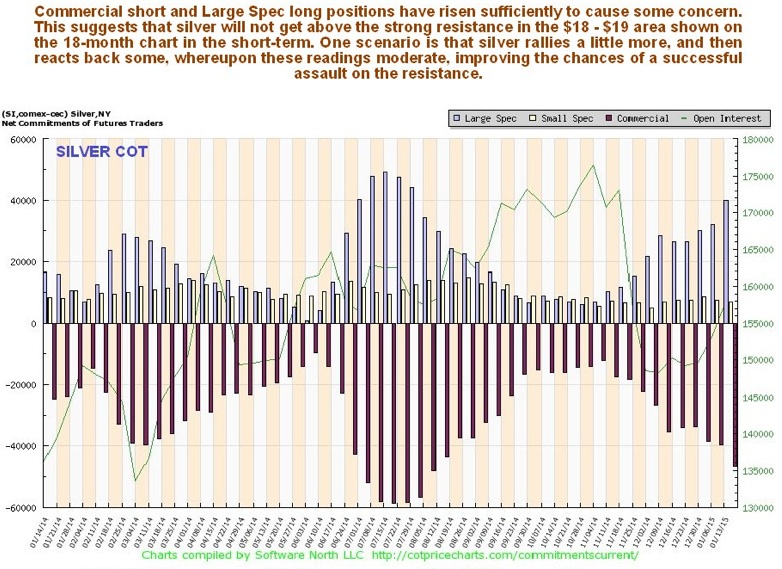