Despite today’s pullback in the metals, a jaw-dropping target for silver has been issued.

James Turk:  “Both gold and silver have pulled back here in London today, Eric, which is not too surprising. The precious metals have been on fire this year, and particularly so last week. Gold and silver both jumped 7% from the week before and gains like that are exceptional. So some cooling off is to be expected…

What we really need to do is try distancing ourselves from what has been a very hot market so far this year. Let’s instead take a look at the big picture, and focus on a key question that you and I have been discussing for weeks. Did gold and silver bottom back in early December when I first raised that possibility?

We still do not know the answer to that question. As a result of the price moves so far this year, the odds have of course improved that the low in gold and silver were made back in early December.

Odds Gold And Silver Have Bottomed Are Improving
Nevertheless, even though the odds have improved that the final low prices of gold and silver have been reached, meaning that their 4-year correction has ended, we all know that anything is possible when it comes to markets. So notwithstanding the positive fundamental backdrop for gold as the ultimate safe haven and the positive technical developments over the past few weeks, let’s keep in mind that anything can happen, good or bad.

So each day we have to evaluate what the metals are doing and respond accordingly. We need to let gold and silver tell us their own story as their price trends unfold. We need to continuously look for more evidence as to whether the downtrend in precious metal prices has ended and a new uptrend is taking place.

To do this, there are several indicators that I look at for gold and silver as well as the dollar and other currencies, but the following chart of weekly silver prices – which you and I have discussed several times before over the years – is one of my favorites. 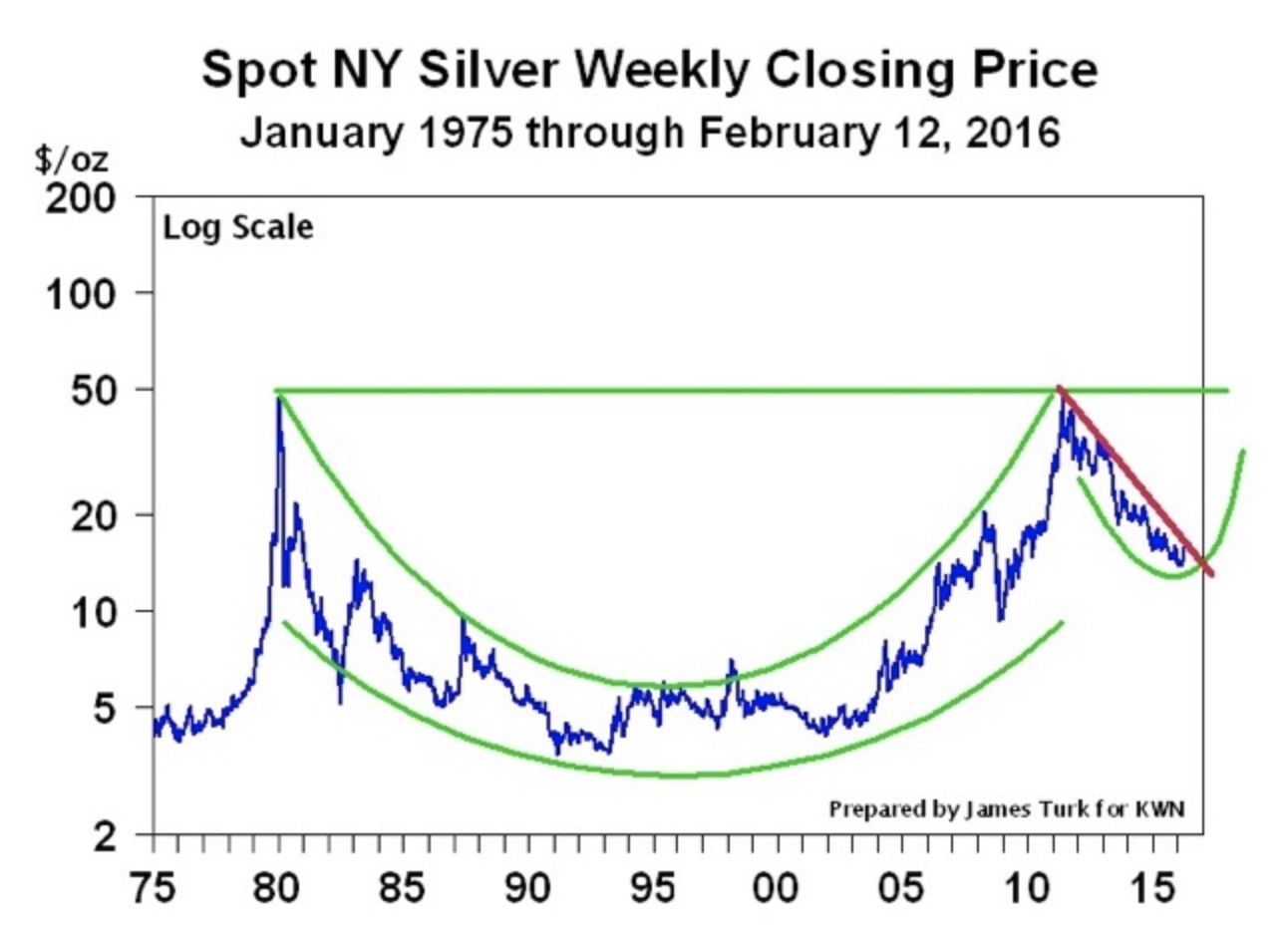 The Most Important Chart In The Silver Market
First of all, this multi-decade chart of silver is very bullish. It shows the distribution that took place after silver peaked at $50 in January 1980. By the early 1990s, the selling pressure of the previous decade dissipated.

The so-called “strong hands,” who were recognizing how undervalued silver was, began overpowering the weak hands, who had been selling since the 1980 peak. In other words, beginning in the early 1990s, silver was being accumulated, and the upward price trend resulting from this accumulation ended in April 2011, again at the same $50 price.

Since then silver has been in a downtrend, which is clear from the red line on the chart. Nevertheless, the overall technical pattern being formed – which is called a “cup-and-handle” – remains potentially very bullish. There are three events needed for this pattern to complete, and for silver to realize its upside potential.

A Jaw-Dropping Price Target For Silver
When that happens, silver will finally begin its bull market. Silver will then head toward the $400 price that can be expected if this cup-and-handle pattern follows its normal historical path.

In other words, gold has been in a bull market since 2008 when it broke above its old record high dating all the way back to January 1980. Silver though is still in its basing pattern, and will be until it breaks above $50, the high reached in January 1980 and April 2011.

Based on the evidence unfolding, Eric, I expect that the next couple of years will be spectacular for silver. We had a taste of how spectacular silver can be awhile back when silver soared from $18 to $50 in the nine months ending in April 2011. But look at what silver did back in 1978 to 1980. That is what I mean by spectacular, and that is what I expect for silver once it finally completes its cup-and-handle pattern by breaking above $50.