As the world edges closer to the next crisis, today the man who has become legendary for his predictions on QE and historic moves in currencies told King World News that we are now in the final seconds of the global mega-bubble.

Global Euphoria Coming To A Disastrous End
March 10 (King World News) – Egon von Greyerz:  The world financial system has been in a euphoric state since 2009. It seems that the Keynesians, like Krugman or the Modern Money Theorists (MMT), are right after all. All asset markets are near the highs and show little signs of changing direction. As Treasury Secretary, Mellon, said in September 1929:

“There is no cause to worry. The high tide of prosperity will continue.”

All that is required is more of the same medicine — more credit, more money printing — to make a virtuous circle of eternal prosperity.

Clearly the Cassandras are all wrong with their pessimistic forecasts that never happen. The Greek Princess had the ability to forecast the future, but her curse was that nobody believed her accurate predictions. (LINK TO Cassandra article.)

We modern Cassandras are in the same position. We are certain that the theories based on spending and borrowing to rescue the biggest debt bubble in history are totally fallacious. We know that a debt problem cannot be solved by more debt. No one defined it more succinctly than Albert Einstein:

“We cannot solve our problems with the same level of thinking that created them.”…

But sadly for the world, Cassandra will be right this time since the party is over. The ‘Time Bomb’ below says it all. Contained in the red bomb are all the explosive elements that will change the history of the world. Any single one of these risks is sufficient to trigger a collapse of the world economy. The combined explosive nature of all the risks will not only disprove MMT, but create a world which will be a lot less pleasant to live in. 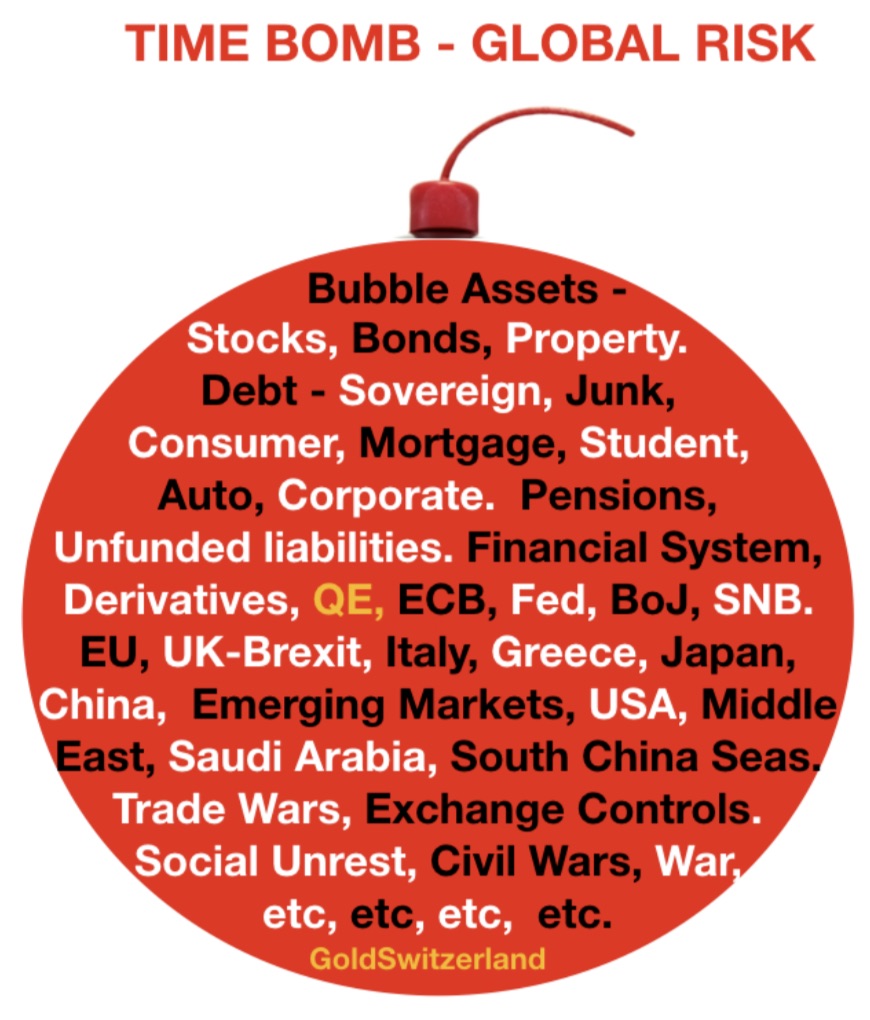 This cleansing of a sick financial system and a morally decadent world will be totally necessary to create new green shoots based on real, sustainable values. But the transition will create great suffering for the whole world.

In the final stages of a major super cycle, there is a normally total lack of clarity in the thinking of world leaders. But not only that, there is also a total lack of leadership. Right now this is exactly what we have. Countries normally get the leaders they deserve. The world is in desperate need of statesmen who can make uncomfortable decisions to get the world out of the mess it is in. But looking around the world, there is no statesman in any country. There are countries with strong leaders like Putin in Russia and Orban in Hungary, but real statesmanship does not exist anywhere.

Look at France, where Macron becomes more unpopular by the day. Soon every Frenchman will wear a yellow vest, and it is already spreading to other countries. The French economy and financial system are weakening and the inequality between the rich and the poor has the seeds of yet another French Revolution.

15X German GDP
Germany has been the biggest beneficiary of a weak euro but in spite of that, the German economy is now deteriorating rapidly. Merkel’s socialist policies will have disastrous effects on the German economy in coming years, exacerbated by an immigration policy which will create a major economic and social disaster. When Deutsche Bank (DB) collapses, which is probable, that will have repercussions not only for German banks but for the global banking system. DB’s derivative book of EUR 50 trillion is 15x German GDP. When counterparty fails, the Bundesbank and the ECB will need to print more fiat money than Germany printed during the hyperinflationary Weimar Republic. In addition, the Bundesbank and the German financial system are the biggest guarantors of the ECB and the Target2 lending to southern European countries, which are all likely to default on their commitments.

The UK leadership is extremely weak. Theresa May’s government is irresolute and divisive. They have spent 2 years trying to extricate Britain from the EU. This issue has totally dominated UK politics at the expense of the economy. With less than 3 weeks left to Brexit-day, the UK is nowhere nearer an agreement with the Brussels elite, who have consistently frustrated the process.

Meanwhile, the US is bankrupt with a currency which is living on borrowed time. Trump had good intentions but has been shackled by the Deep State. When the biggest economy in the world collapses, it will have major repercussions on the world. Already, every major country or continent in the world has problems of a magnitude that will bring each country down. In addition to the above nations, this carnage will engulf Japan, China, South American countries, and many more. 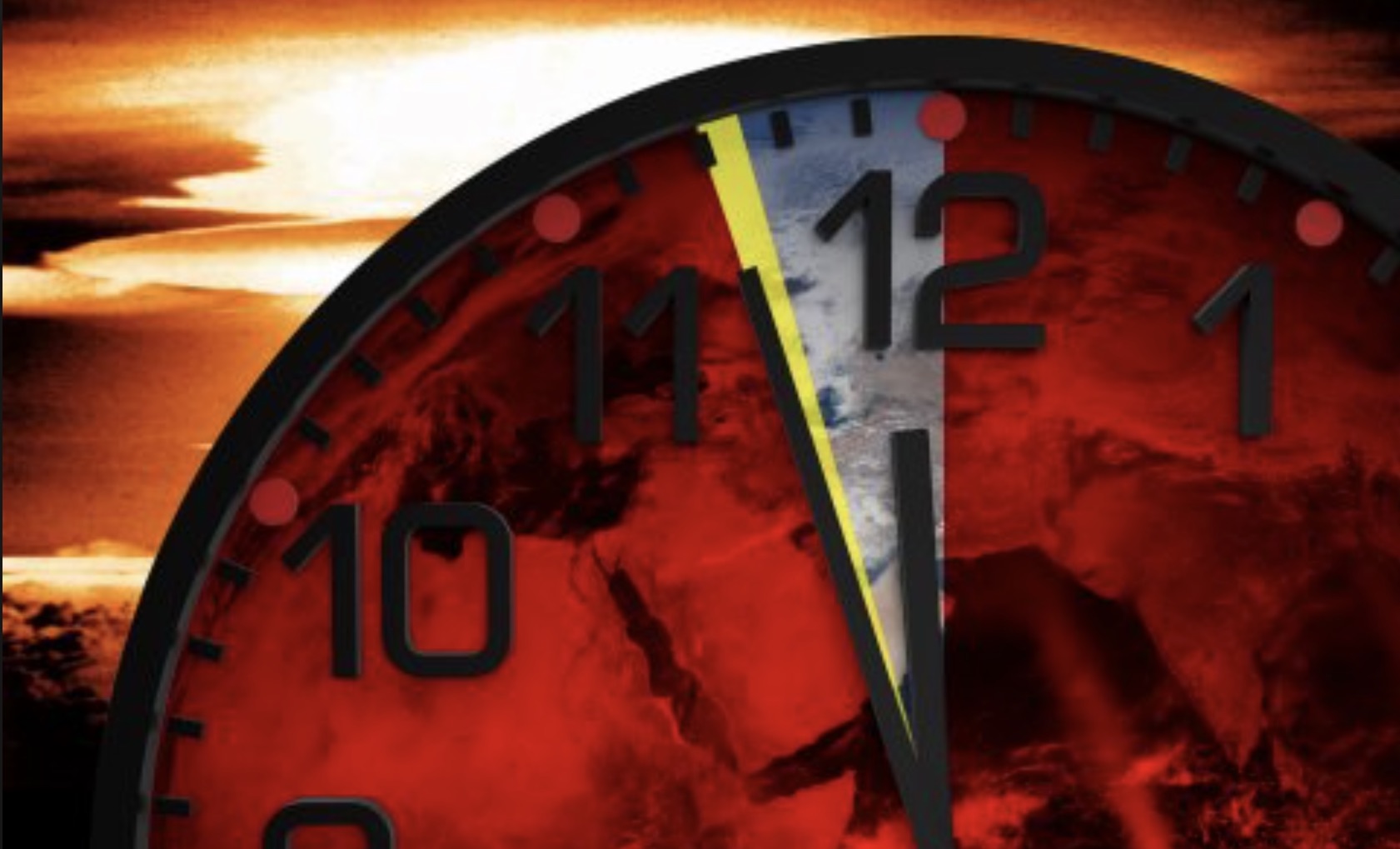 The problem is simple to define and is all based around debts and liabilities. At the beginning of this century, global debt was $80 trillion. When the Great Financial Crisis started in 2006, global debt had gone up by 56% to $125 trillion. Today it is $250 trillion. 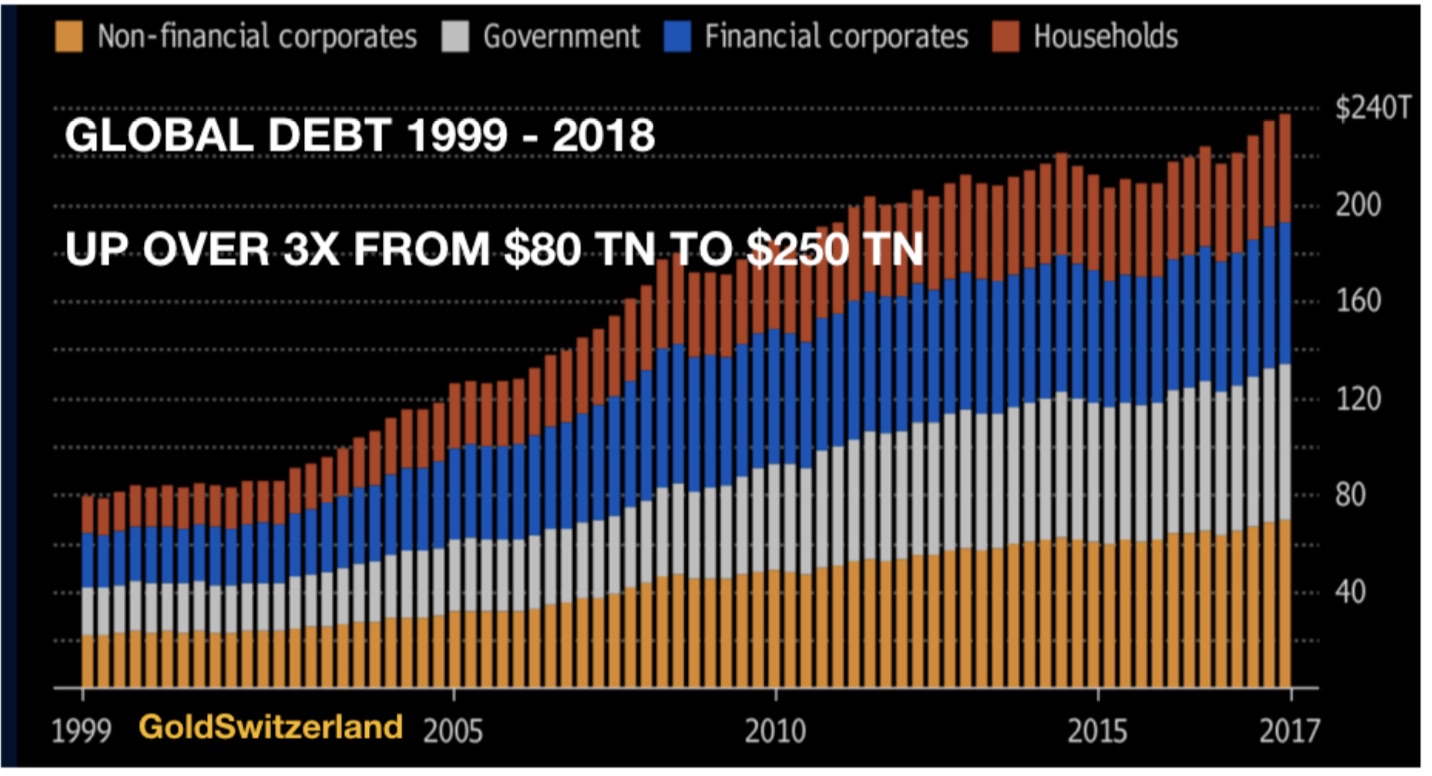 Thus, in this century global debt has more than trebled. So far MMT seems to work. Just print and borrow more money and the economy will take care of itself. Einstein said it won’t work and the laws of nature also tell us that this is a saga that will have an unhappy ending.

But rather than trying to figure out what the exact trigger will be, it is much more important to focus on how to protect yourself financially. Gold has, throughout history, been the solution to a mismanaged economy based on deficits, debts and money printing. But it must be physical gold, stored outside the financial system, in the safest jurisdictions and vaults. It is essential to have direct ownership of the gold and direct access. ETFs, futures, or part ownership of bars, are not proper wealth preservation.

The $2 Quadrillion Nightmare
The Krugmans and MMT fans will now get more than they ever asked for. Because the world will soon start the biggest money printing bonanza in history. Bearing in mind that total debt and liabilities, including derivatives, are over $2 quadrillion, we could easily see similar or higher amounts of money printing. The recent KWN article by Lundeen projects $3,000 silver and $30,000 gold. Those are not unrealistic targets but are most likely based on normal inflation. With hyperinflation, the future gold price is likely to have many more zeroes.

We must remember that we are holding gold primarily to preserve wealth since it is the best store of value and represents stable purchasing power. But gold is likely to do better than to maintain purchasing power for the simple reason that there will be a massive shortage of physical gold when the gold paper market blows up. This is why it is critical to hold physical gold, bars or coins.

I wrote about the Gold Maginot Line a few weeks ago, which is at $1,350. This line has stopped gold since 2013. After a first attempt to break through two weeks ago, we have probably finished a small correction and gold is building up momentum to break through. Once it starts it will go very quickly through the old high of $1,920. Remember that all-time highs have already been broken in many currencies and that will also be the case for gold prices in US dollars.

For anyone who doesn’t understand the necessity of owning gold, just go through the list of risks in the ‘Time Bomb.’ And once you have gone through it, go through it again and again and again. The list includes 3 dozen reasons why you need to hold physical gold as protection or insurance against unprecedented global risk. Anyone who doesn’t own gold today mustn’t wait for the next move up to take place. That could be too late. Once the real move starts, it will be very difficult to get hold of gold at any price. At some point there will no physical gold on offer. The paper gold positions of banks and futures exchanges will see to that.

Central banks will also have major problems. Most of them have covertly sold their official holdings, and most of what they have left they have already leased to the market. That gold has gone to China, India, Russia, and all the central banks have left is an IOU from a bullion bank that won’t be honored. 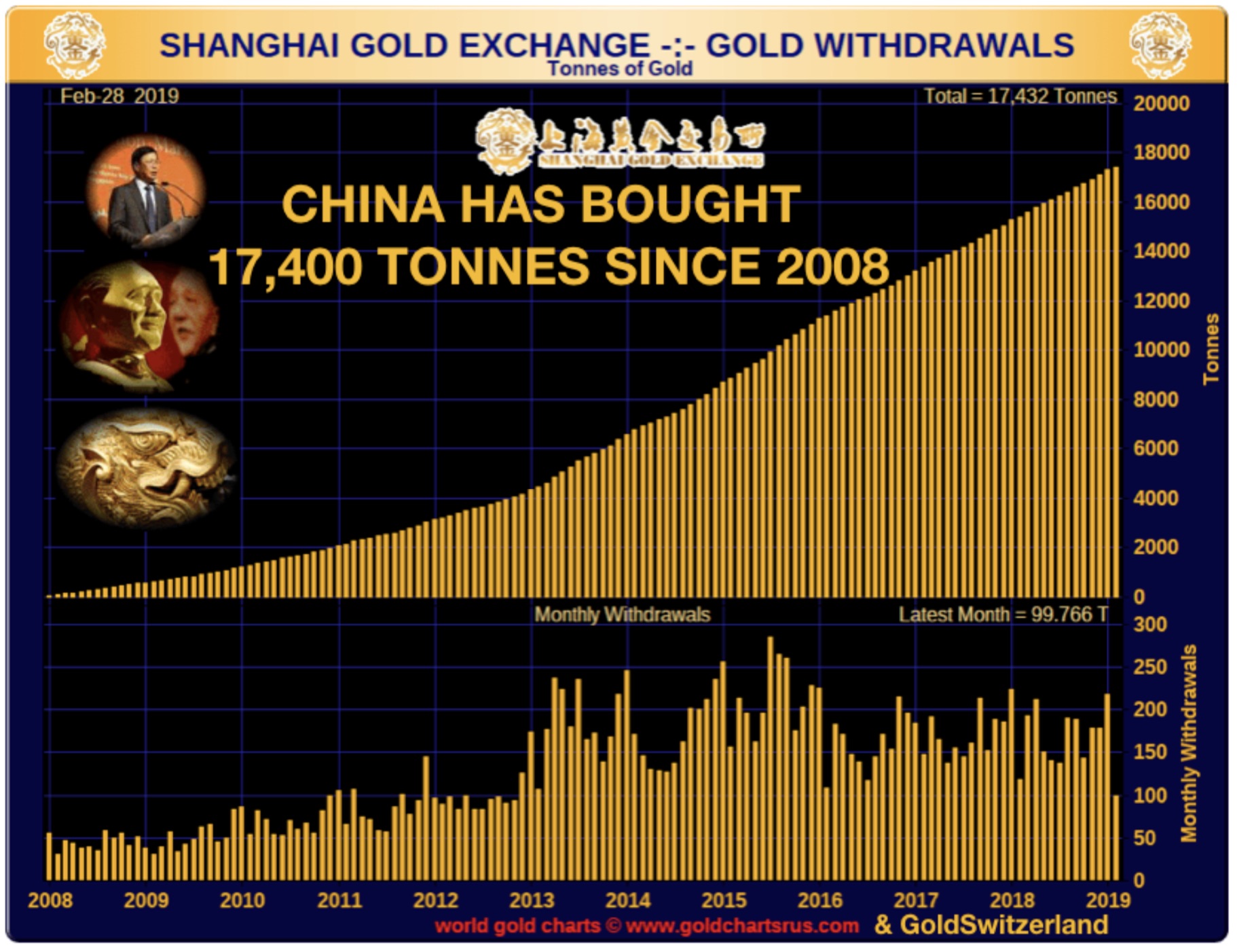 With a guaranteed mess in the world financial system, the resulting panic in the gold market will eliminate the ability for people to protect themselves. 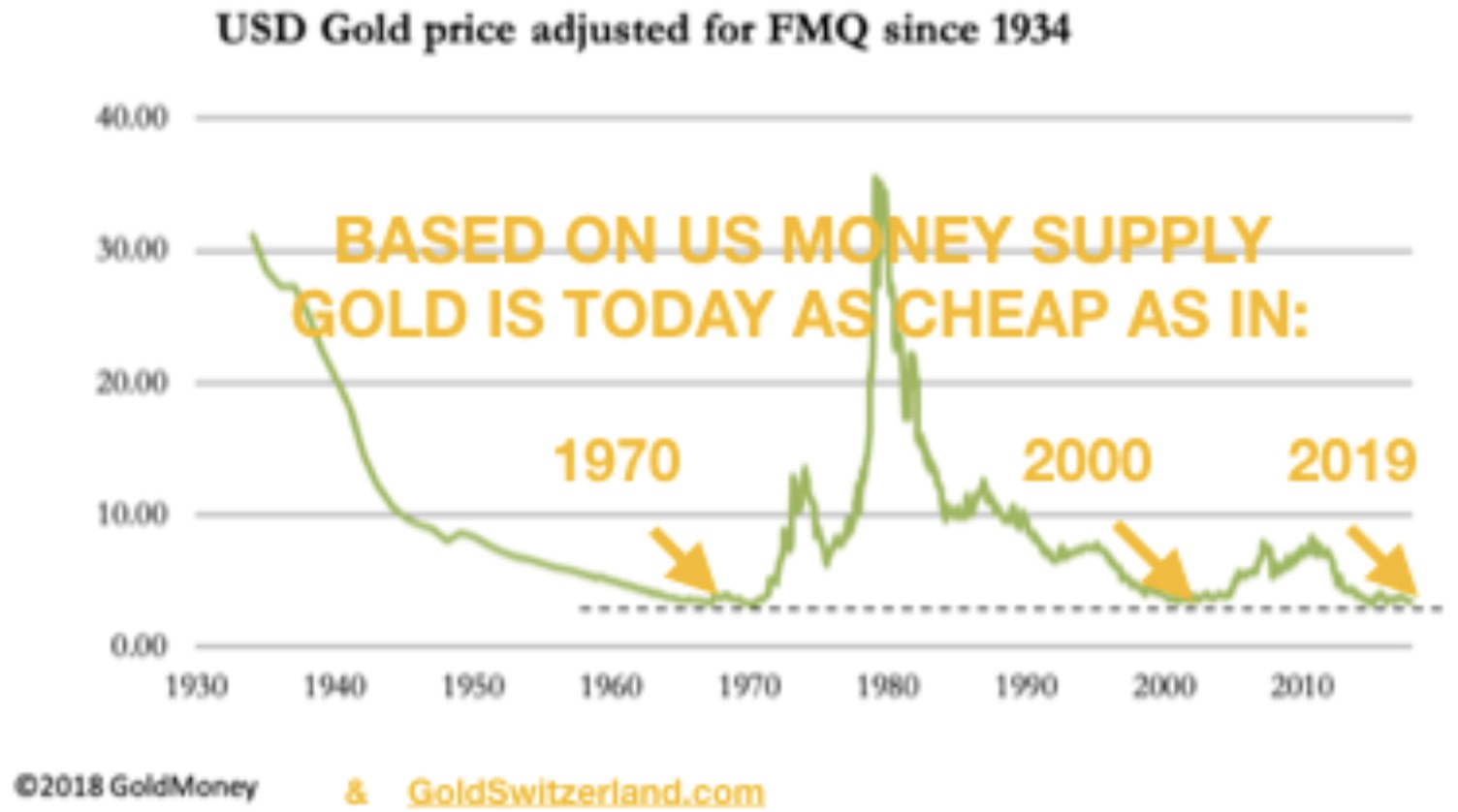