It appears investors need to buckle up because an unforeseen stock market collapse will cause a global panic into gold and hard assets.

The inflation genie is out of the bottle and policy makers are unable to sustainably ease off the liquidity pedal. Financial repression has become essential to secure the health of the economy at the current levels of overall debt.

Nonetheless, easy and cheap access to capital has also been one of the key reasons for the historical disconnection between asset prices and fundamentals. In fact, the sheer amount of financial assets today that trade at near record multiples is truly concerning.

Preventing a collapse in risky assets has become a true policy constraint for monetary authorities. Different than other times in history, the Fed’s ability to allow the cost capital to substantially rise is incredibly limited.

Ultimately, policy makers have their hands tied and will be forced to counter deflationary pressures in financial assets with further liquidity. Igniting an inflationary environment is the path of least resistance.

To use the US stock market as an example: The 5-year cyclically adjusted earnings yield is now near all-time lows. In other words, investors are undeservedly paying excessive prices relative to bottom-line fundamentals.

Going back over a century of historical data: Such depressed earnings’ yields have always led to very significant market meltdowns: 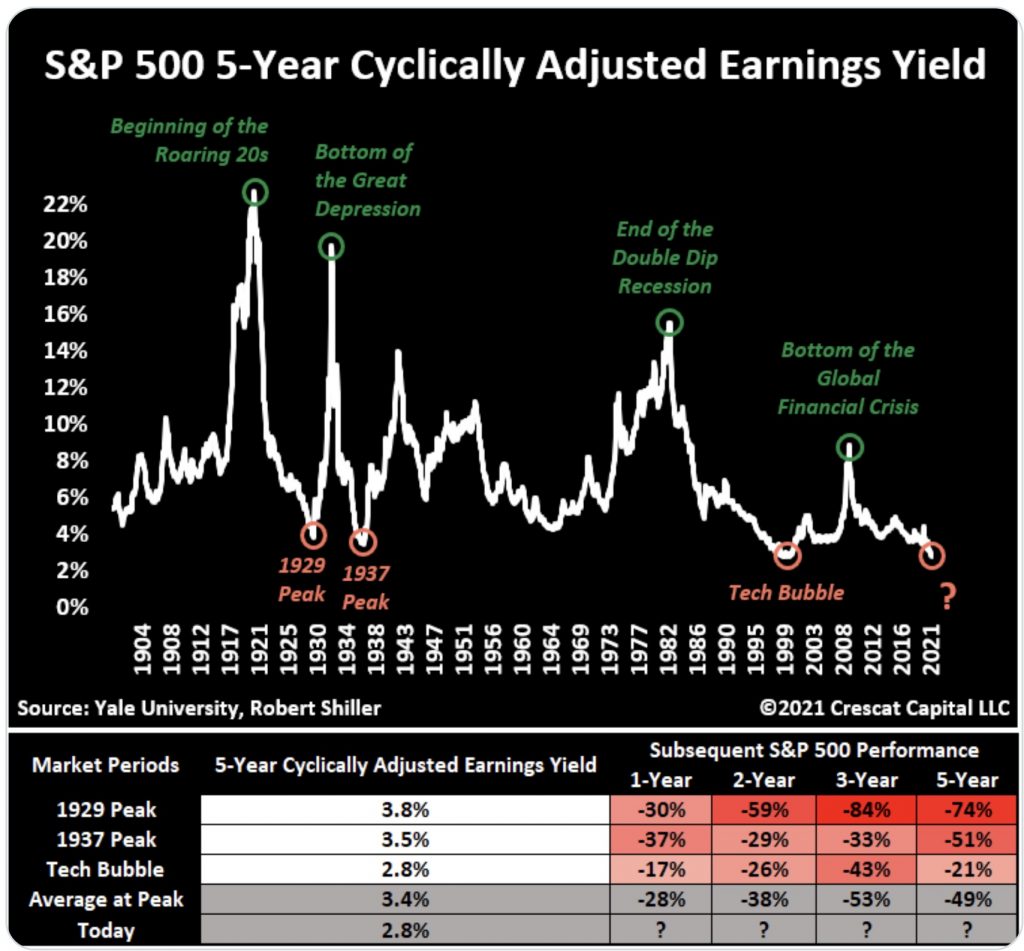 For every one of these periods, the market unexpectedly reversed from very bullish multi-year trends with an average subsequent 3-year performance of -53%.

Naturally, as different opportunities present themselves over time, market positioning and capital allocation tend to change drastically every five years or so causing major reversal trends.

We strongly believe investors are poised to experience another one of these significant market rotations where capital allocation moves away from historically expensive equities to then find its way into cheap tangible assets, i.e. commodities.

Now let’s address the elephant in room. You would think that a low interest rate environment would be positive for stocks, but that is far from the truth. The problem is that inflation is running much higher than interest rates.

When we look at valuations of equities versus 10-year real yields in the last 120 years, equity fundamental multiples significantly compressed when real yields were negative for a long period of time.

To be fair, however, this is the first time we have seen negative 10-year real rates with valuations at historic levels. Also, to recall: Commodities performed exceptionally well during the three highlighted times. 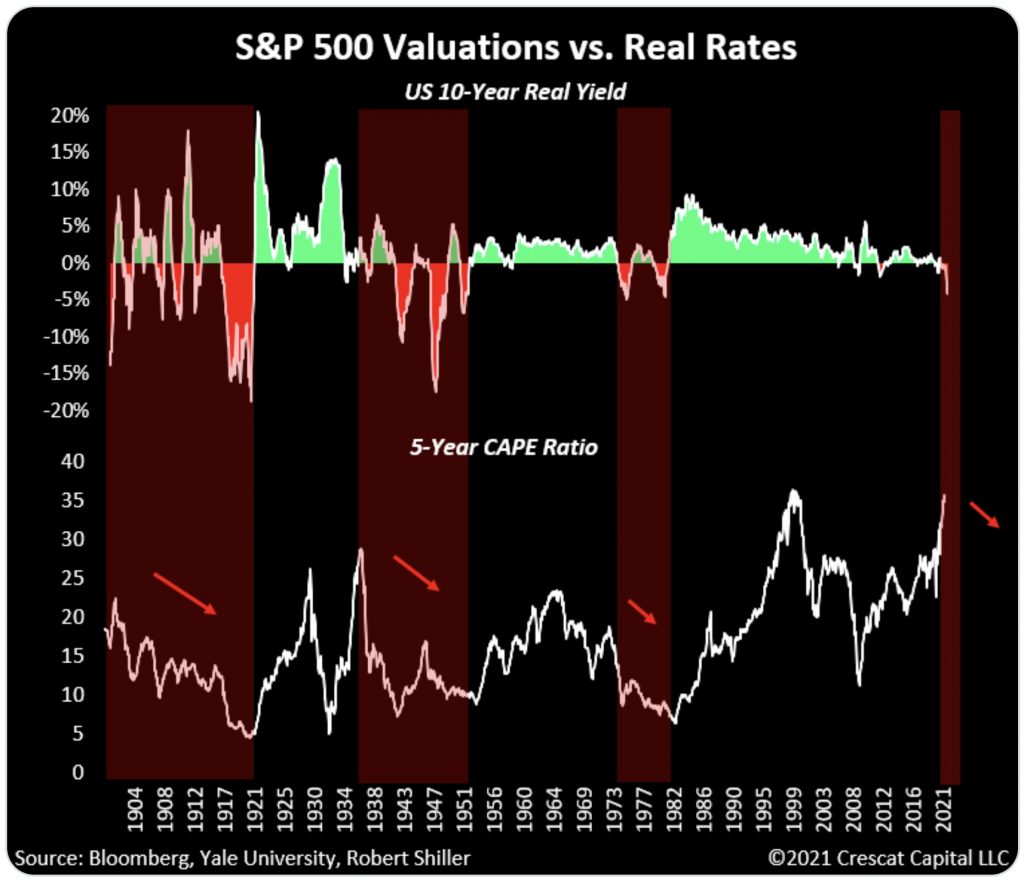 On the other hand, we believe inflation will continue to surprise to the upside in the following years. The combination of Fed stimulus to finance historical amounts of government spending has led to one of the largest wealth transfers in history.

Since the GFC, the increase in government debt has been directly linked to the increase in net worth of the US population. One important difference from prior years, however, is that fiscal policies are increasingly becoming more focused on the bottom 50%. 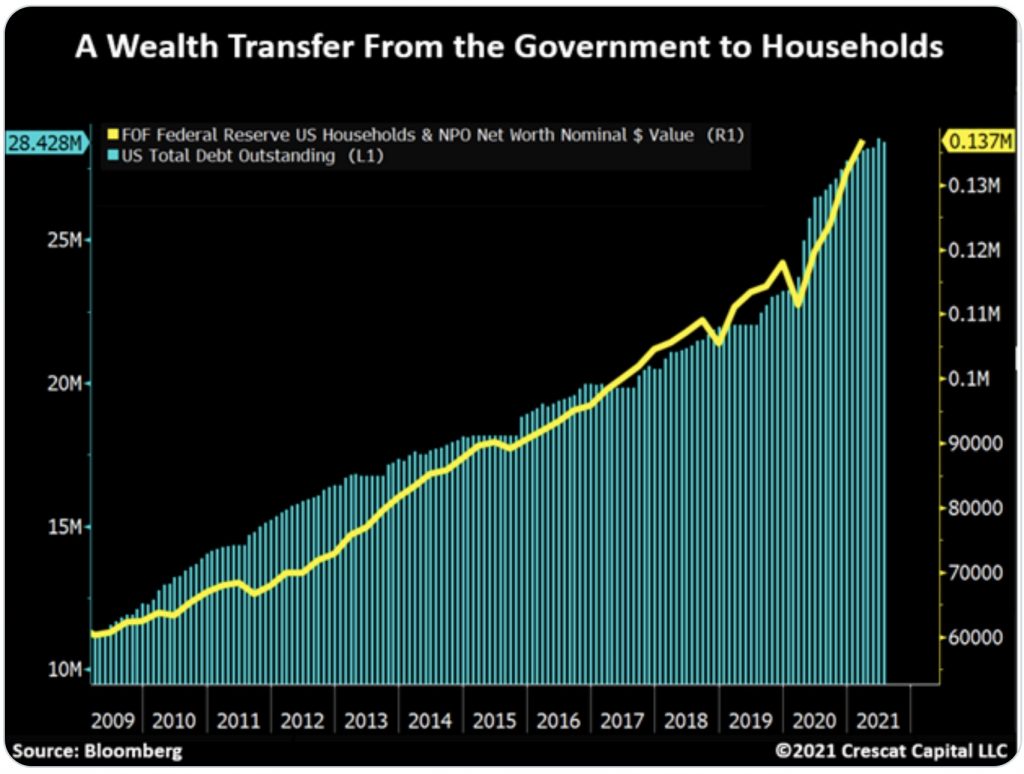 The US fiscal deficit problem has somewhat improved since March of this year. The deficit now stands at -12% of GDP, which is 6 pct points better than its prior lows at -18.5%. The issue is that this number still is 2 pct points lower than the worst levels reached during the GFC.

The US government is determined to pursue a fiscal agenda that has four main fronts:

It is hard to believe that with such an ambitious agenda government spending will not remain aggressive going forward. We think fiscal deficits will continue to run at double-digits for the next years.

The issue, however, is that in addition to the extreme levels of government stimulus, the US trade balance is already turning significantly lower and likely to continue to deteriorate.

WARNING: US Trade Deficit Will Continue To Deteriorate 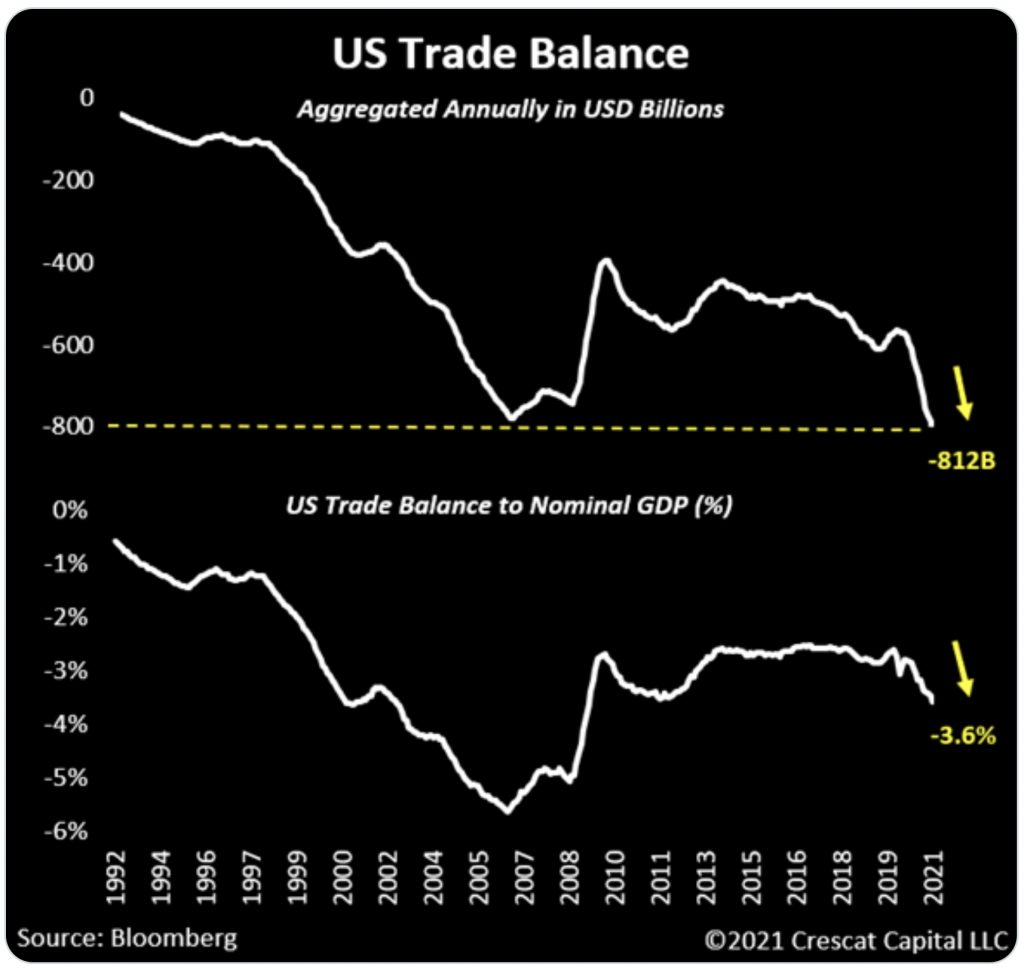 Now let’s get back to the inflation part of the thesis: For the last four decades, cyclical increases in inflationary forces have been short lived.

Aside from a steady downward trend in money velocity, one of the key reasons why inflation has not yet grown more sustainably is due to a secular decline in wage and salary growth since the late 1970s.

However, we think we are experiencing the beginning of a structural shift in the growth of workers’ remuneration. Most investors have been paying close attention to the wage growth tracker by the Atlanta Fed which continues to show very muted changes since the pandemic started.

The issue with this index is that it applies a sample of only 60,000 households or less than 0.04% of the total amount of employed Americans. We think the most accurate calculation is to look at the wages and salaries aggregate number divided by the number of employed persons.

Our own measurement is now growing by 14% on a 24-month basis. Similar to what Americans experienced in the early 60s to the late 70s, we think we are at the very beginning of an upward inflection in wages and salaries. 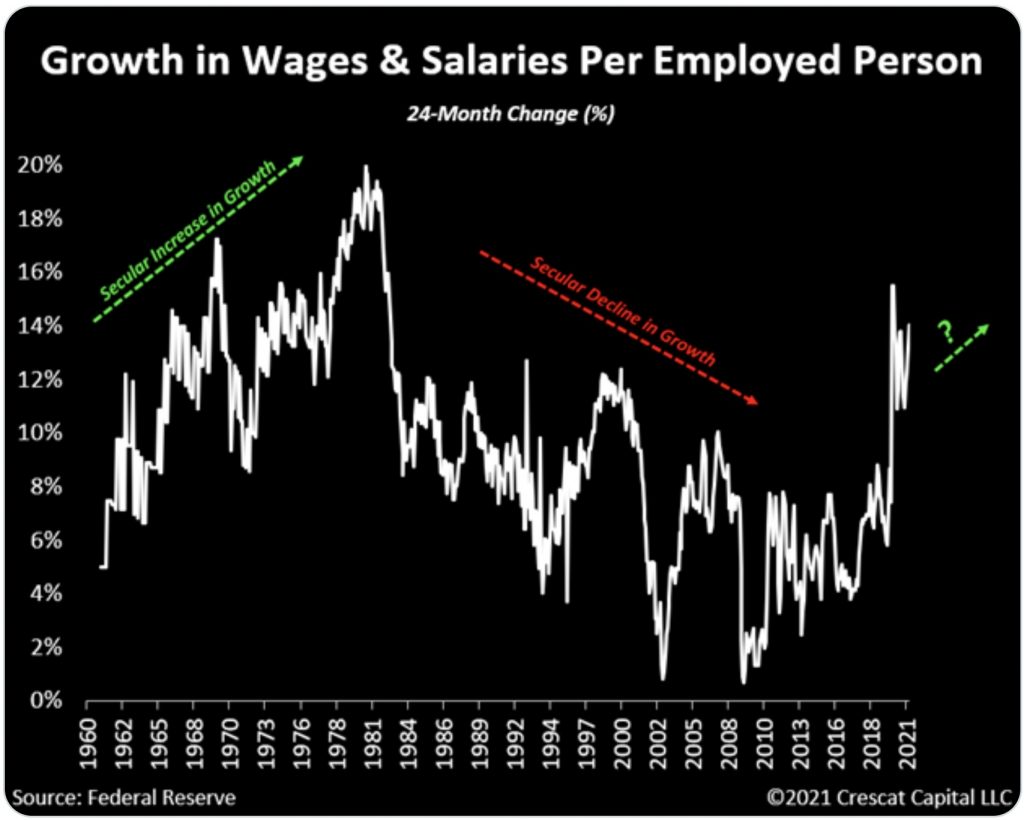 Finally, let’s talk about portfolio positioning. What we view as particularly exciting in the current macro environment is the commodities market. In our analysis, the natural resource industries have turned into remarkably profitable businesses in the last several quarters.

Aside from the coal industry, we view the entire segment as an attractive investable opportunity. The aggregate free-cash-flow now generated by commodity producers is growing at a pace we have not seen in the last 30 years. 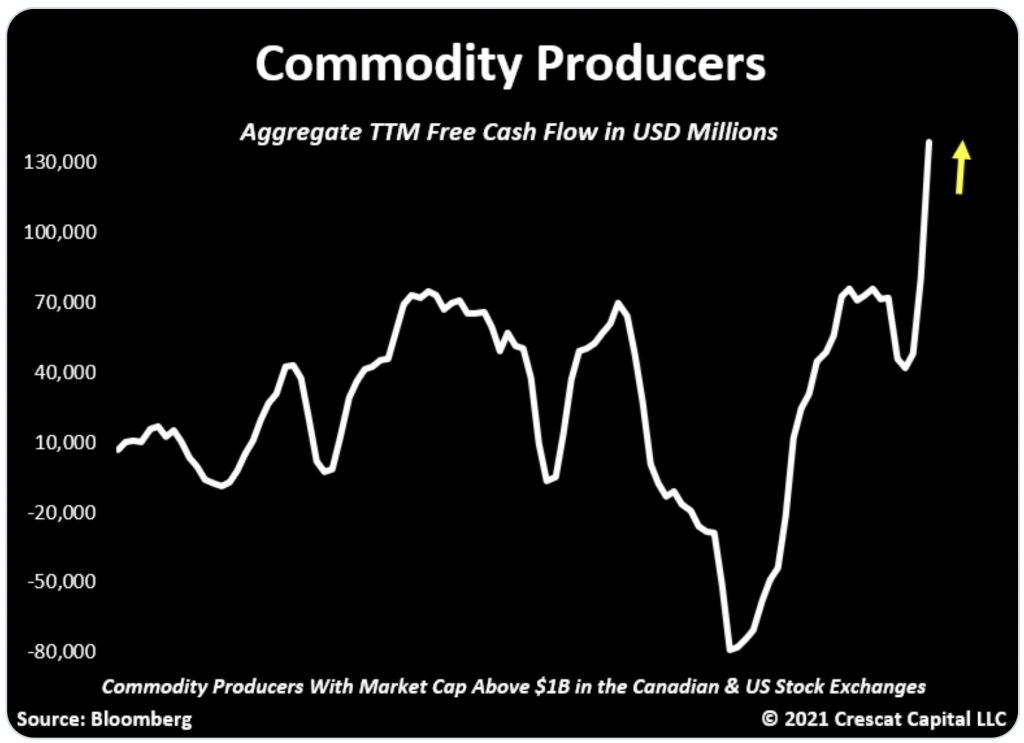 However, one thing stood out: Precious metals’ companies were clearly the most attractive on a growth, balance sheet strength, valuation, and quality basis.

Aside from the strong bottom-line growth and relatively high free-cash-yield, the margins for gold and silver companies are significantly better than the other commodity producers.

Although natural resource companies are capital intensive businesses, precious metals’ producers have a much cleaner balance sheet profile than the others.

Among some of the important metrics to analyze how early we are in the precious metals cycle is the level of merger and acquisition activity in the industry.

As shown in the chart below, the M&A cycle has not even started yet. Senior miners have become true free-cash-flow machines at these metal prices.

ALL PART OF THE CYCLE:
Mining Merger & Acquisition Mania In Coming Years 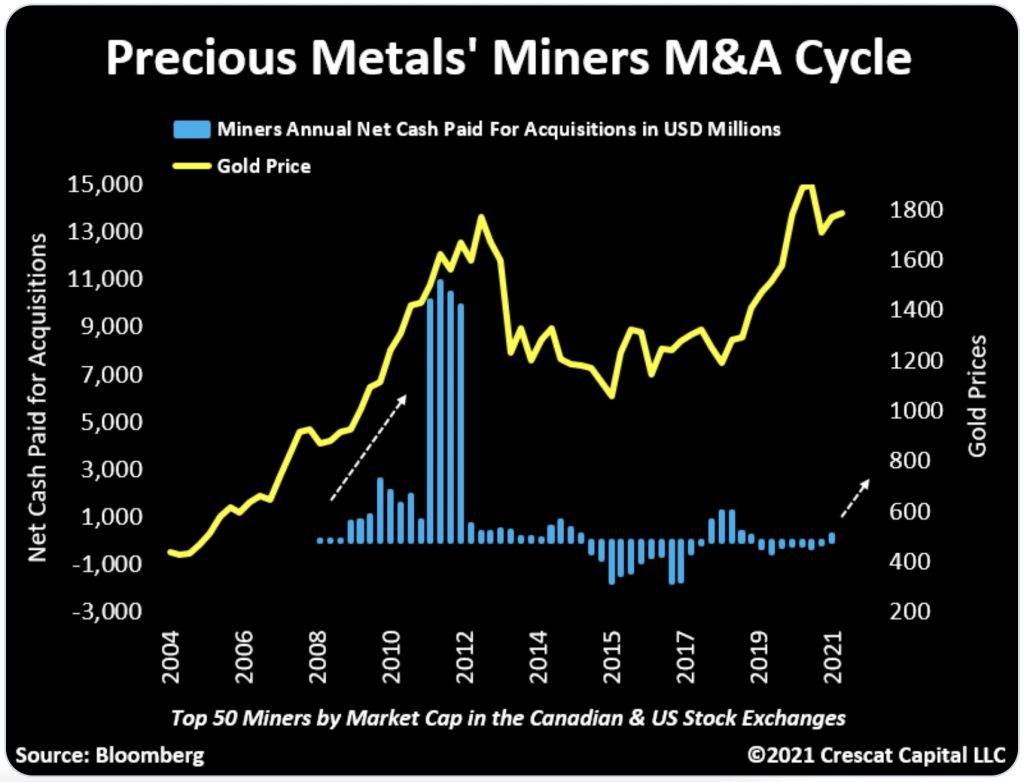 We have not seen this level of net cash accumulation in a long time, setting up a flood gate of liquidity for the following years. In our view, it is just a matter of time before major producers look for high-quality exploration companies as acquisition candidates.

To conclude: We favor a larger exposure to gold and silver companies as we remain highly convicted that the underlying monetary metals will benefit the most from the current macro environment.

High-Grade Gold Discovery!
John Lewins:  “We just announced the results from 17 diamond drill holes at Judd and we had already announced a few holes prior to that. The drilling and that development now shows there is an area of approximately 650 meters along strike, and 300 meters vertically. If you look at the drill results we just announced, we reported 8.5 meters at almost 50 grams per tonne of gold equivalent. Another one was 3.7 meters at over 53 grams per tonne gold equivalent. So these are quite substantial numbers.

Similar To 5 Million Ounce Gold Discovery Only 150 Meters Away
So we’ve got this area now of 300 meters vertically and 650 meters along strike. The potential there when you look at thickness we’ve recorded to date is something like 2 million tonnes. We are talking about 200,000 square meters, and this is parallel to Kora. And to date at Kora 1,000 by 1,000 meters is approximately what we’ve drilled, and that’s got just under 5 million ounces of high-grade gold resource. And again, Judd is parallel to it, only 150 meters away from Kora, and it’s showing itself to be very similar in terms of mineralization and high grade. The average grade at Kora is about 10 grams per tonne of gold. We think Judd has already shown the enormous potential it has to significantly increase its resource. And, Eric, Judd is still open in every direction.

Increasing Production From 120,000 To 350,000 Ounces Of Gold Per Year!
And we are going to roughly triple production from 120,000 ounces of gold to 350,000 ounces per year. This will be done with a cash cost below $500 an ounce and all-in sustaining costs were below $600 an ounce. We are talking about enormous free cash flow from this project. And, importantly, we are tripling production in the future using existing cash flow. So K92 will not be taking on any debt or raising money through equity. We are simply using the cash flow we generate from the operation as it stands today to build this into an even larger project and massively increase the production profile. K92 Mining, symbol KNT in Canada and KNTNF in the US.

BUCKLE UP: We’ve Entered Final Phase Of The Terrifying Endgame – All Fiat Currencies Will Be Destroyed