Boockvar – What Is Happening In The Gold Market Is Remarkable

Today one of the greats in the business noted that what is happening in the gold market is remarkable.

July 19 (King World News) – Here is what Peter Boockvar wrote as the world awaits the next round of monetary madness:  The National Association for Business Economics released their Q2 Business Conditions survey and things did improve from Q1 but what was most noteworthy were the comments on the labor market. They said “Materials cost pressures appear to be easing, but more firms are facing higher labor costs and difficulty in hiring, especially skilled labor…Pricing power, or lack of it, and labor costs are generating some headwinds for a significant number of firms.” Their Net Rising Index (NRI) on wages was the best since January 2016. Passing these costs on to the rest of us was mixed as current plans for “prices charged continued its recent upward trend” but “respondents’ expectations for prices over the next three months suggest price increases will become less widespread.” Lastly of note, “As in the April 2017 survey, a large majority of respondents (76%) reports that their firms have made no changes in hiring or investment decisions in anticipation of potential changes in US policies.”…

Bottom line, it is this set up for the possibility of a broader rise in wages because of the difficulty in finding qualified workers that will have the Fed more likely than not wanting to raise rates. Yes, they’ve acknowledged the recent moderation in the rising rate of change in inflation but their belief in the “transitory” nature of it is predicated on what they see on the wage side. I’ll repeat again the belief that QT starts in September and is another form of tightening just as QE was one of easing.

The Chinese economy grew 6.9% y/o/y in Q2 just as it did in Q1 and that was one tenth more than forecasted. The manufacturing, construction, mining, utility (so called tertiary industries clocked 6.4% growth )and service (7.7% growth) sides of the economy grew at the same pace as in Q1 while the ag/forestry/fishing sectors saw an improvement vs Q1. China continues to balance the desire for fast growth but at the same time trying to control the rampant credit expansion that is fueling it. Also of note, in the last month of Q2, retail sales, industrial production and fixed asset investment all beat estimates. Bottom line, via mostly thru government initiatives, we’ve been seeing all quarter a stabilization in the Chinese data that was reflected in today’s GDP report but it’s almost impossible to parse what is organic and what is from government dictate.

In a strange piece in the Chinese newspaper called ‘People’s Daily’ today titled “Effectively guard against financial risks” (I’m using Google translate) just before the release of the Q2 data, they said “the central government has attached great importance to the financial work, especially the prevention of financial risks, and adopted a series of measures to strengthen financial supervision.” A bit lost in translation on their desire to control financial risks they also said “the financial field risk points wide, hidden, sudden, contagious, dangerous, must be extra careful, prudent management. Both against the ‘black swan’, but also against ‘gray rhinoceros’, all kinds of risk signs cannot be taken lightly, cannot turn a deaf ear.” So they’ve now introduced ‘gray rhinos’ as a risk to look out for, whatever that means.

Notwithstanding the upside surprise in the economic data, Chinese stocks got slammed overnight. The Shanghai index was down by 1.4% while the Shenzhen index was lower by 4.3%. The Shenzhen index is the only major Asian stock market that is in the red year to date. The reasons being given relate to the Chinese newspaper piece highlighting the regulatory crackdown that is intent on the strengthening of financial supervision. The headline in the South China Morning Post was “China stocks plunge on ‘Black Monday’, with nearly 500 stocks falling by daily limit of 10%.” The H share index in Hong Kong was completely disconnected from the A share selling and instead focused on the actual Chinese data as it rose .5% and is up 15% year to date. Copper too as it is up by almost 1%. The yuan is up slightly.

Days before the next ECB meeting, they printed the final June CPI data and it was the same as the initial as expected with the headline up 1.3% and core rate at 1.1% y/o/y. Here is a chart of core CPI as the ECB debates the timing on when to start tapering. It is clear that they are deathly afraid of disrupting the markets and why they are obsessed at holding the markets hands as it continues the process. It won’t change the market impact however I believe. European bond yields are most likely going higher still but are modestly lower today. After saying that more rate cuts are not on the agenda at their last meeting, they will likely say that more QE is not now either. It’s a game of semantics of course as tapering is now firmly on the docket with the only question being timing. 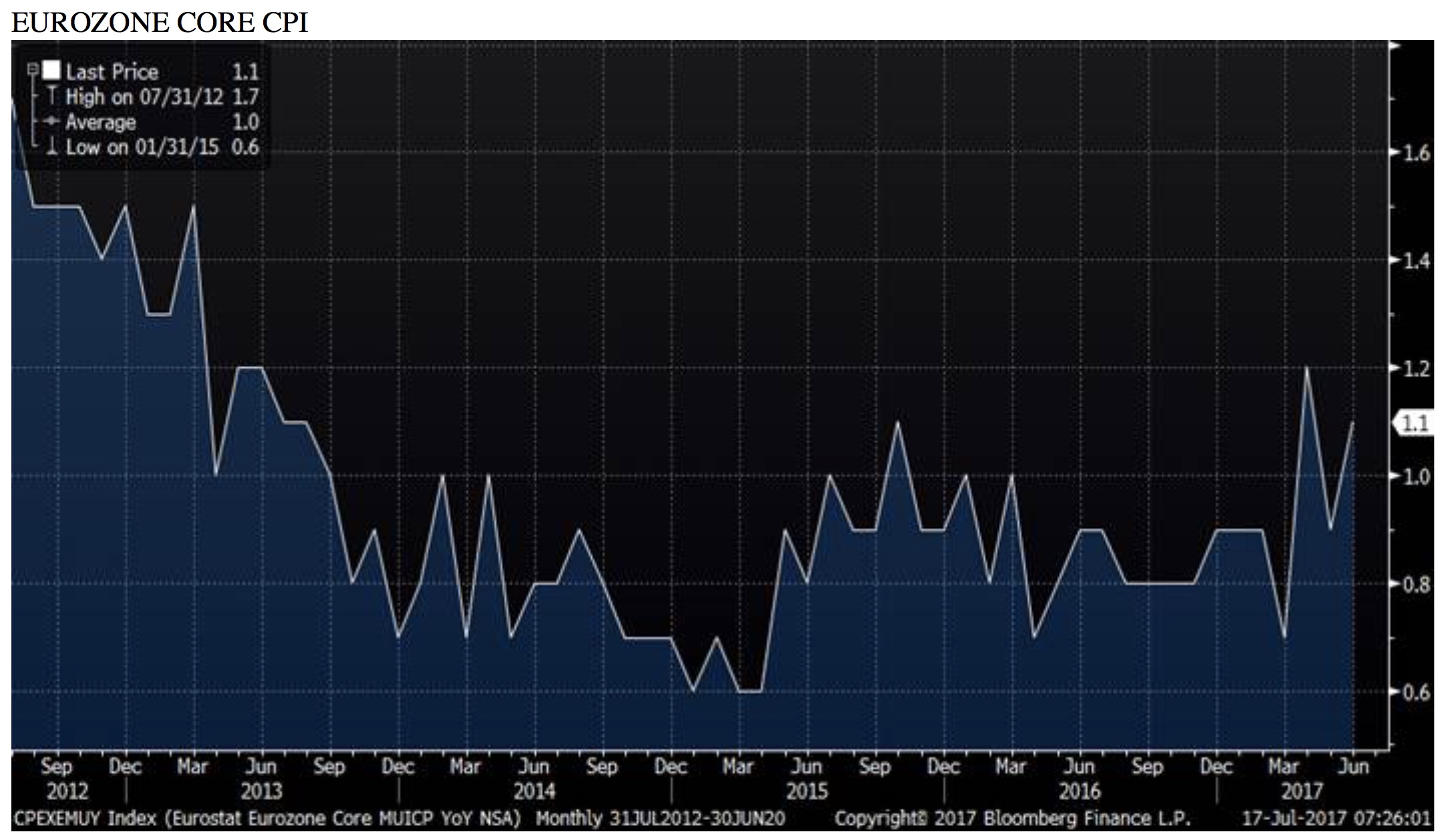 For those of you following gold, the net speculative long position for the week ended Tuesday (and thus before Yellen’s perceived dovish testimony) fell to the lowest level since late January 2016, just a month after gold bottomed at a level that I believe marked the end of the bear market. Here is chart: 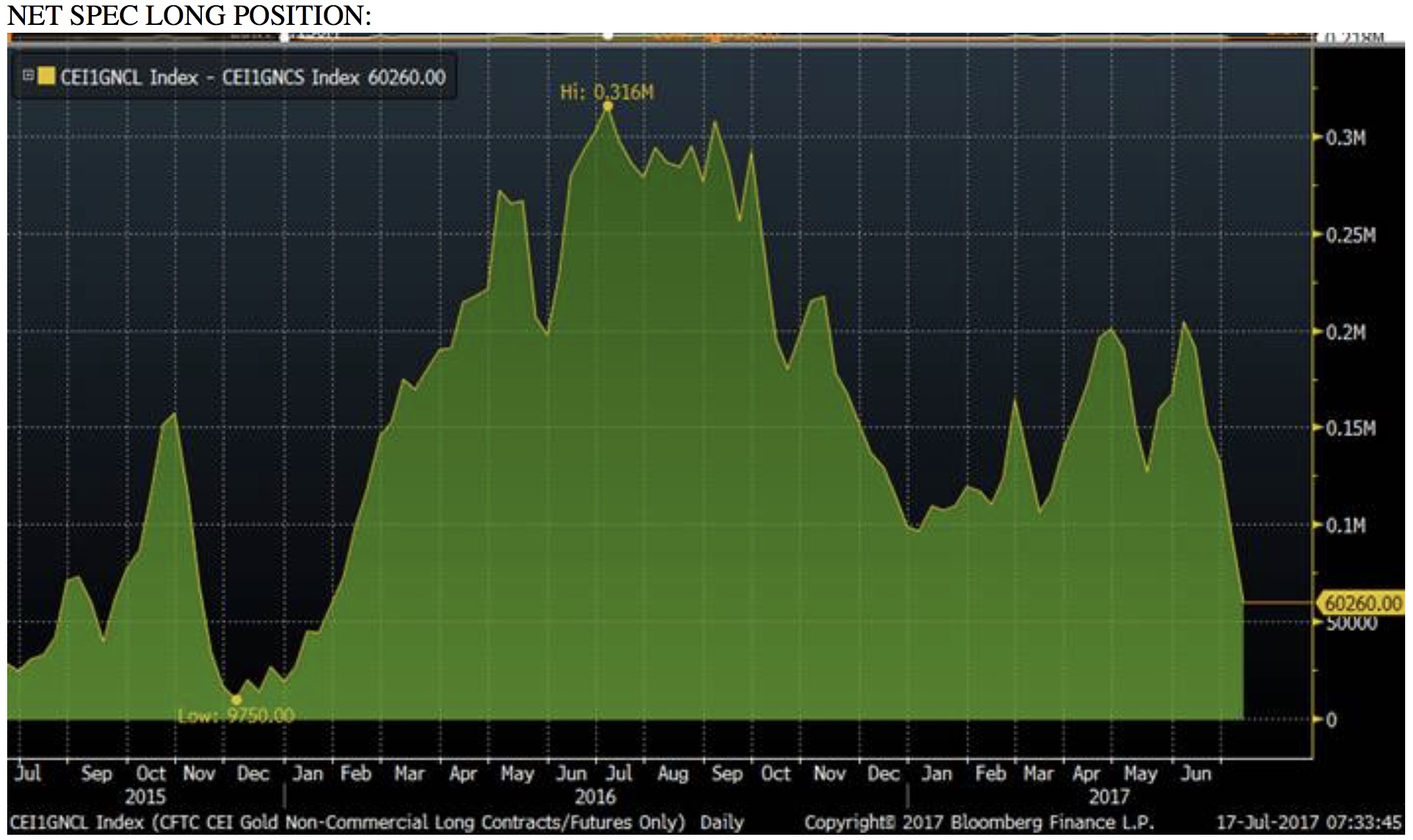 The short side of this net position rose to the most since July 2015. 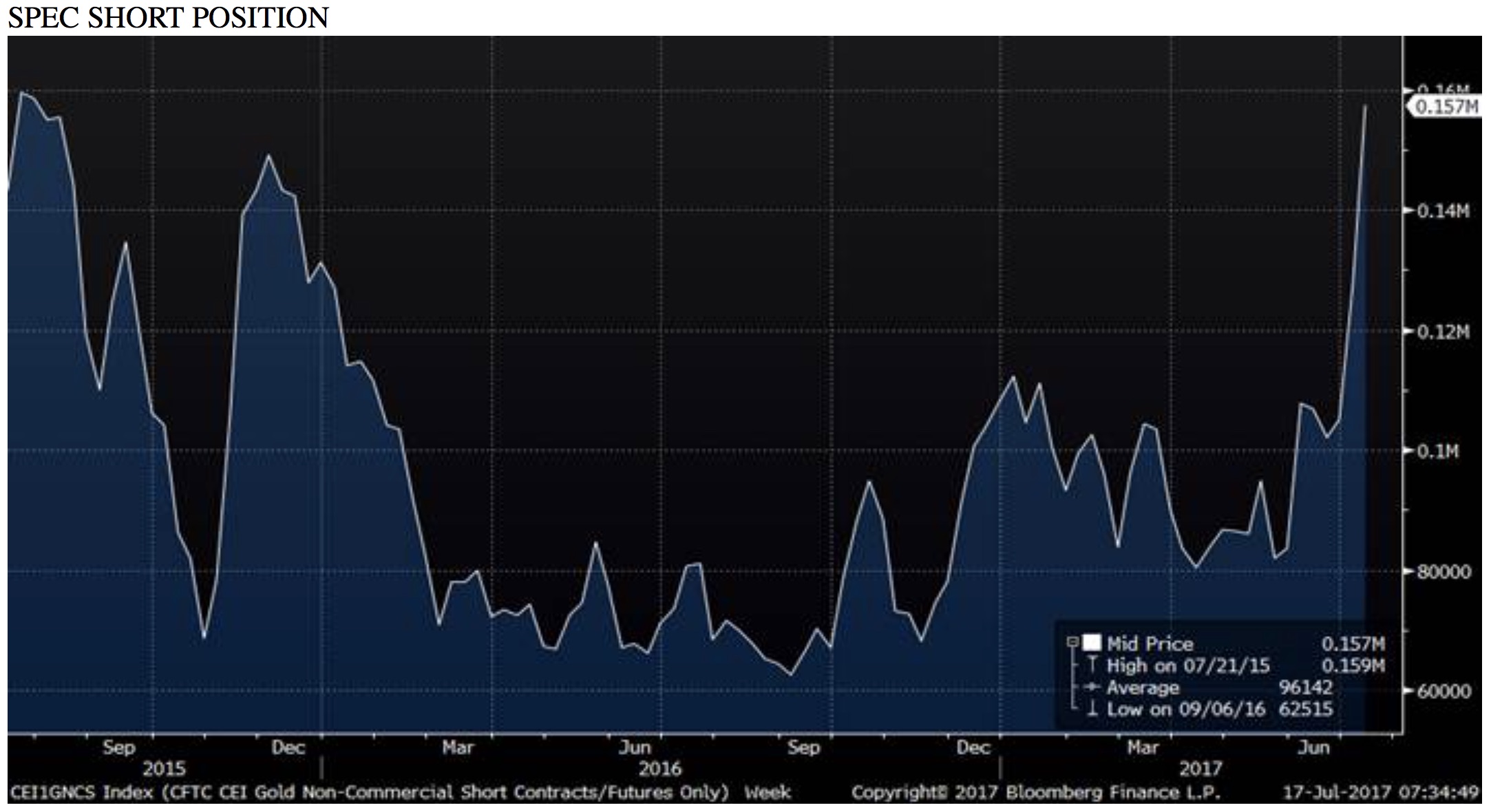 We’ll see Friday how much Yellen’s comments changed this positioning as gold rallied almost $15 in the last 3 days of last week. Also, the rising short position comes as the US dollar trades at the lowest level since September and the likely reason has been the rise in real rates although they remain barely above zero. The real 5 yr yield is at just .21%, it was at .50% on the day the Fed first hiked rates in mid December 2015 which coincided with the bottom in gold.

***ALSO JUST RELEASED: THIS IS TERRIFYING: Will All Of Your Money Be Wiped Out In The Blink Of An Eye? CLICK HERE.